Treatment of three- and four-part fractures

Recent data indicate that many elderly patients with displaced proximal humeral fractures do not benefit from surgical treatment even for complex fracture patterns. In most elderly there is some degree of physical impairment after fracture regardless of the fracture anatomy and treatment modality. The degree of impairment does not always correlate with the complexity of the injury, and some patients with minimally displaced fractures end up with pain and poor function. Pre-injury infirmity and medical comorbidity may strongly influence outcome after surgery. Poor bone quality and degenerative changes in the rotator cuff may further compromise outcome after surgery. Studies of outcome in the average patient or younger patients with proximal humeral fractures may not apply to older patients, and observer administrated measures of shoulder function (e.g. the Constant score) used to evaluate patients in clinical studies may overemphasize the importance of range of motion and strength. Some elderly patients have lower functional demands and may accept restricted strength and range of motion if pain is limited.

Evidence based recommendations for management according to age are sparse and the optimal treatment for proximal humeral fractures in the elderly has yet to be determined. The methodological quality of clinical studies has generally been low and recommendations are inconsistent. Current best evidence consists largely of uncontrolled case series with a high risk of bias. Systematic reviews have been unable to demonstrate statistically and clinically significant benefits from surgical treatment of displaced fractures.1,2,3,4,5,6,7,8,9,10,11 and 12 However, within the last 5 years new data from randomized trials have appeared in the literature13,14,15,16,17,18,19,20 and 21 and protocols for planned randomized studies have been published.22,23,24,25 and 26 It is likely that the next updated Cochrane review will contain some evidence based treatment recommendations.

This chapter is based on data from current randomized clinical trials, systematic reviews and large epidemiological studies. Whenever possible, data on elderly (65–79 years) and very elderly (80 and above) patients are reported separately.

Preoperative assessment of proximal humeral fractures is usually limited to radiographs. A series including an anterior-posterior view, a perpendicular lateral/scapular view and an axillary view is most useful. In some institutions the axillary view is omitted because it can be painful. This may be unwise because the axillary view is the best view for ensuring the glenohumeral joint is not dislocated, it can add important information on tuberosity displacement, and it improved observer agreement on classification in one study.45 Most institutions have access to computed tomography (CT) and three dimensional (3D) CT scans (Figures 20.1 and 20.2). CT may be useful in preoperative planning and might improve reliability of classification but no study has reported a beneficial effect on patient outcome. There is generally limited correspondence between imaging appearance and functional outcome in proximal humeral fractures.

Within the last two decades, more than 20 observer studies and systematic reviews have reported that orthopaedic surgeons greatly disagree when classifying according to the Neer and the AO classification. They have consistently reported low kappa values for interobserver agreement ranging from 0.17 to 0.52.46,47 A review on agreement on four commonly used classification systems between experienced shoulder surgeons only, reported kappa values of between 0.15 and 0.44.48 Lack of consistency in classification may explain some of the discrepancies in treatment recommendations and outcome found in the scientific literature. 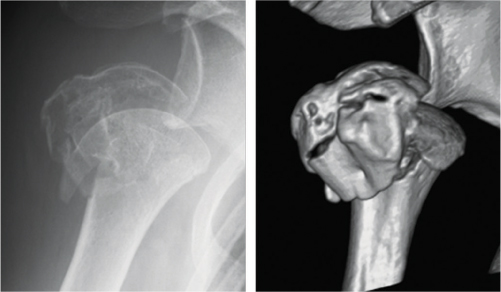 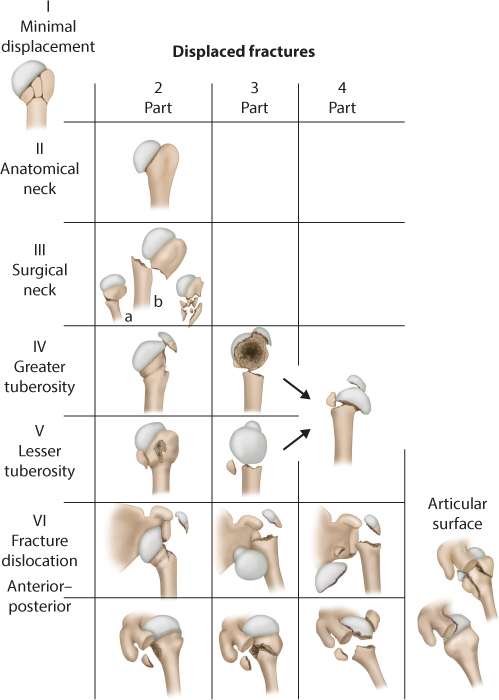 Figure 20.3 The 16 categories of the Neer classification. A fracture is considered displaced if one or more of the four anatomical segments (greater tuberosity, lesser tuberosity, humeral head and humeral shaft) are displaced more than 1 cm or angulated more than 45°. (Modified from Neer CS. J Bone Joint Surg Am 1970;52(6):1077–89. With permission from Rockwater, Inc.)

The low agreement does not improve through selection of experienced observers, by using high quality radiographs only, by reducing the number of classification categories, or by adding advanced pictorial modalities like CT scans or 3D CT reconstructions.46 However, systematical training of observers seems to improve agreement especially among shoulder specialists.49 There seems to be less agreement on complex fracture patterns.50

A common ‘fracture language’ is lacking in the scientific literature on proximal humeral fractures and the two most common classification systems are partly incompatible.51 The result is difficulty comparing outcome from clinical studies and ‘translation’ of treatment recommendations into other populations. For example, minimally displaced fractures can correspond to 15 different AO subgroups, ‘classic’ four-part fractures (Neer category 12) can be classified into at least eight different AO subgroups and AO type C fractures can appear as one-, two-, three- or four-part fractures in the Neer classification.51 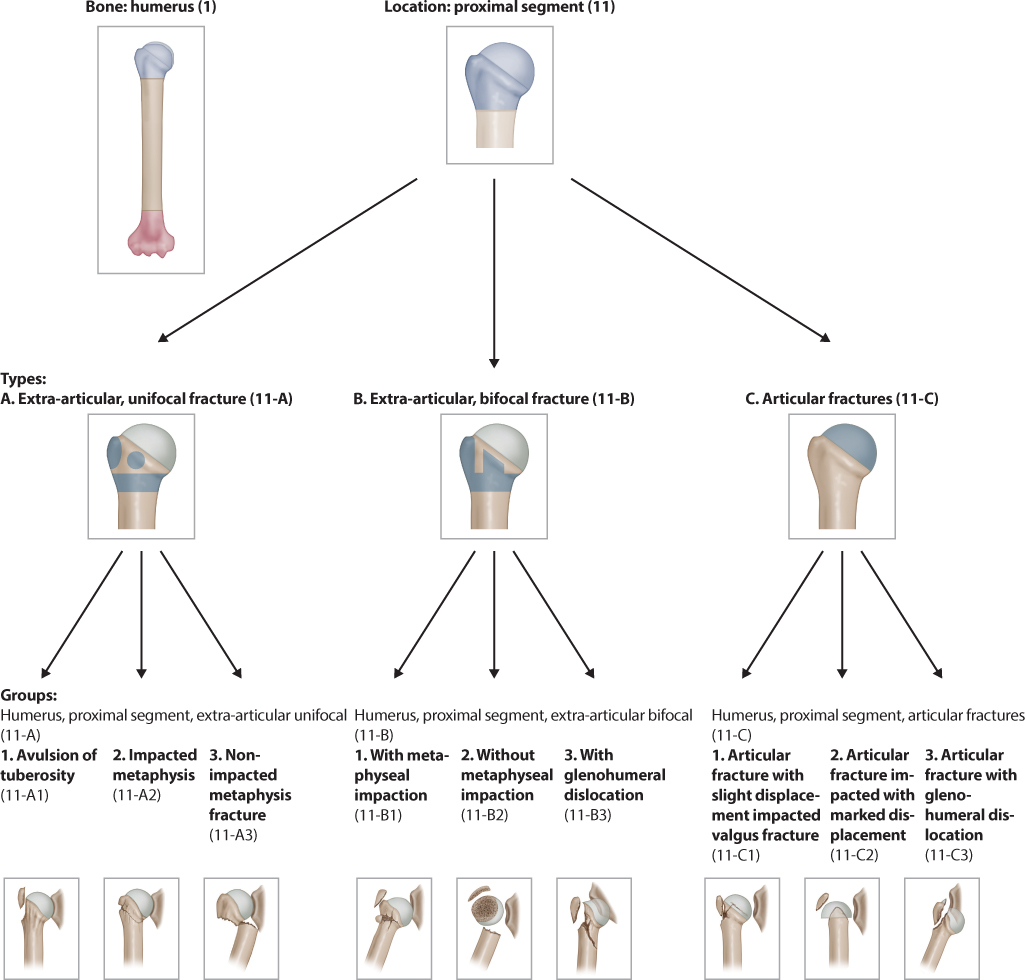 Figure 20.4 The three types and nine groups of the AO classification. The 27 subgroups are not shown. (Reprinted from Marsh JL et al. J Orthop Trauma 2007;21(10 Suppl):S1–133. With permission from RightsLink.)

The proportion of surgically treated patients has increased within the last two decades. Khatib et al.52 reviewed 50,100 patients aged 65 years or older in New York State between 1990 and 2010 with a proximal humeral fracture. The incidence of proximal humeral fractures increased by 28% in the period, but the number of operatively treated fractures increased by more than 40%. The use of locking plates increased from 2001 to 2010 and the use of reverse arthroplasty increased from 2006 to 2010. The use of hemiarthroplasty decreased correspondingly from 2000 to 2010.

An offer of operative treatment is based on patient age, comorbidity, pre-injury function, fracture anatomy, bone quality, soft tissue injury, the surgeon’s experience and the expectations of the patient.

Medical comorbidity merits careful consideration. Each additional medical comorbidity increases the risk of readmission after surgery by 20%.54 A 90-day readmission rate of 14% was reported among 27,017 surgically treated proximal humeral fractures. Three out of four readmissions were associated with medical diagnoses. Among surgical causes, locking plate osteosynthesis had a significant higher readmission rate (29%) compared to hemiarthroplasty (16%) and reverse prostheses (20%). Mechanical complications after locking plate use accounted for 11% of all readmissions. Infections were also more common in locking plates.55

Surgical or non-surgical treatment in the elderly?

There is limited high level evidence to inform decision making for displaced fractures in elderly patients. A Cochrane review5 included 23 small and heterogeneous randomized trials with a total of 1,238 included patients. Six studies with 270 patients compared surgical and non-surgical treatments. It was concluded that the current evidence is weak, and shows no benefit with surgery. One out of nine surgically treated patients needed additional surgery.

Kontakis et al.7 included 810 hemiarthroplasties, mainly for four-part fractures, from 16 randomized and non-randomized studies and concluded that there is inadequate evidence to support the effectiveness of primary hemiarthroplasty in the treatment of complex proximal humerus fractures.

Nanidis et al.56 included 486 patients from two randomized trials and eight observational studies comparing surgical and non-surgical treatment modalities. They concluded that there was no demonstrable difference in outcomes between fractures managed surgically or non-surgically.

A large randomized clinical trial comparing non-surgical and surgical management of displaced fractures involving the surgical neck has recently been published.57 A total of 250 patients referred for surgical treatment were randomized into non-surgical treatment or surgical treatment. The surgical group was managed according to the surgeon’s preference. Patients were recruited from 33 British orthopaedic departments and all patients followed the same rehabilitation protocol. After 24 months, 215 patients were evaluated with the Oxford Shoulder Score. No difference in outcome between the two groups was found. The rates of complications and secondary surgery were not significantly different, but the cost of surgery was significantly higher.

There is no consensus on the optimal time for surgery. Both patient related and potentially modifiable factors influence the time to surgery.

Menendez and Ring58 reported data on 70,000 surgically managed proximal humeral fractures from a national database. Of these, 87% were operated on within 2 days and 13% had surgery after 3 days or more. Increased inpatient morbidity was found after delayed surgery, even when comorbidities and fracture complexity were controlled for. Late surgery was associated with inpatient adverse events (odds ratio 2.1) and prolonged postoperative stay (odds ratio 1.7). In the late surgery group, 57% were discharged to rehabilitation or skilled nursing facility compared to 28% in the early surgery group. Weekend admission was the most common reason for delay in surgery caused by unavailability of the surgeon or operating room facilities.

Outcome assessment with the Constant score in the elderly

The most commonly used outcome assessment instrument in studies of proximal humeral fractures is the Constant–Murley Shoulder score.59,60 and 61 It is an observer administrated shoulder specific outcome instrument consisting of four parts: pain (15 points), activities of daily living (20 points), range of motion (40 points) and strength (25 points). The maximum score is 100 points indicating a shoulder with no disability.

Only few studies have systematically collected data on outcome after non-surgical treatment of different fracture patterns.

In a systematic review Iyengar et al.62 reported data from 12 studies covering 650 non-surgically treated fractures. There were 49% minimally displaced, 25% two-part, 21% three-part and 5% four-part displaced fractures. Mean age was 65 years and the mean follow-up time was 46 months. Radiographically, healing was obtained in 98% but 13% had complications. Only 2% developed avascular necrosis of the humeral head. The mean Constant score was 74.

Court-Brown et al.63 reported outcome after non-surgical treatment of 125 AO B1.1 fractures followed for 1 year. This fracture pattern represents about 15% of all proximal humeral fractures and appears as minimally displaced fractures, two-part greater tuberosity fractures, two-part surgical neck fractures or three-part fracture fractures (Figure 20.5) within the Neer classification (Figure 20.3). Mean age was 71 years and 81% of the patients reported a good to excellent result after non-surgical treatment with a mean Constant score of 72 overall and 67 in patients aged 80–89. The outcome depended on age and displacement of the fractures, but generally B1.1 fractures can be managed non-surgically.

Hanson et al.64 prospectively followed 160 non-surgically treated fractures. There were 75 minimally displaced, 60 two-part, 23 three-part and 2 four-part fractures according to the Neer classification, and 85 type A, 71 type B and 4 type C according to the AO classification. Four underwent surgical fixation with locking plates or screws, and five had arthroscopic subacromial decompression because of impingement. After 1 year, the difference in mean Constant score between the injured and the contralateral shoulder was 8%. The risk for delayed union and non-union was 7%. 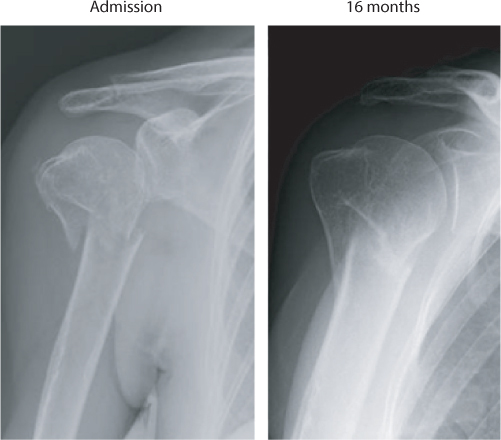 Figure 20.5 A 62-year-old woman with a valgus-impacted fracture (AO B1.1) treated with a sling and early exercises pre-injury function was obtained despite healing with slight angulation.