Diagnosis of and screening for osteoporosis

Osteoporosis is a disease that is characterized by low bone mass, microarchitectural disruption, poor bone strength and an increase in the risk of fracture. The World Health Organization defines osteoporosis as a bone mineral density (BMD) at the hip or spine that is less than or equal to 2.5 standard deviations (SD) below the young normal mean reference population.

Osteoporosis is the most common bone disease of humans. It is a major public health concern worldwide, impacting an estimated 200 million people1 and contributing to approximately 9 million fractures in the year 2000.2 It is estimated that more than 40% of postmenopausal women and 30% of men will eventually sustain osteoporosis related, or fragility, fractures. Fragility fractures lead to an increase in morbidity, mortality and cost.3,4,5,6,7 and 8 Osteoporosis can be prevented, diagnosed and treated. It is typically silent until a patient sustains a fracture. Thus, early detection of osteoporosis is critical to prevent fragility fractures in the at-risk elderly population.

There are several risk factors for osteoporosis. These can be grouped into one of four categories: demographics and lifestyle, medical comorbidities, pharmacological agents and genetic polymorphisms (see Table 10.1). The risk of fragility fractures in both men and women is most closely related to low BMD, low body mass index, history of prior falls and prior fractures.3

Fragility fractures result from a combination of decreased bone strength and an increase in fall risk. Several skeletal characteristics contribute to bone strength, including BMD, bone architecture, matrix and mineral composition, and rate of bone turnover. The most important of these is BMD. Patient BMD depends on the peak bone mass and the rate of bone mass loss. Peak bone mass is achieved in a patient’s 20s and early 30s and, depending on genetic and environmental influences, generally decreases after this point. This bone loss occurs as a result of an age related, and in females, an estrogen related, imbalance in the activity of osteoblasts and osteoclasts. Additionally, several polymorphisms of genes coding for various receptors such as the vitamin D, estrogen and calcitonin receptors have also been linked to BMD and are thought to affect the rate of loss of BMD.9

Estrogen plays a role in the normal remodelling of bone and its deficiency in postmenopausal women leads to an increase in osteoclastogenesis secondary to interleukin-1 and tumour necrosis factors, which are normally inhibited by estrogen. Additionally estrogen normally directly promotes osteoclast apoptosis via production of transforming growth factor β, thus a decrease in estrogen levels would lead to an increase in osteoclast activity.9 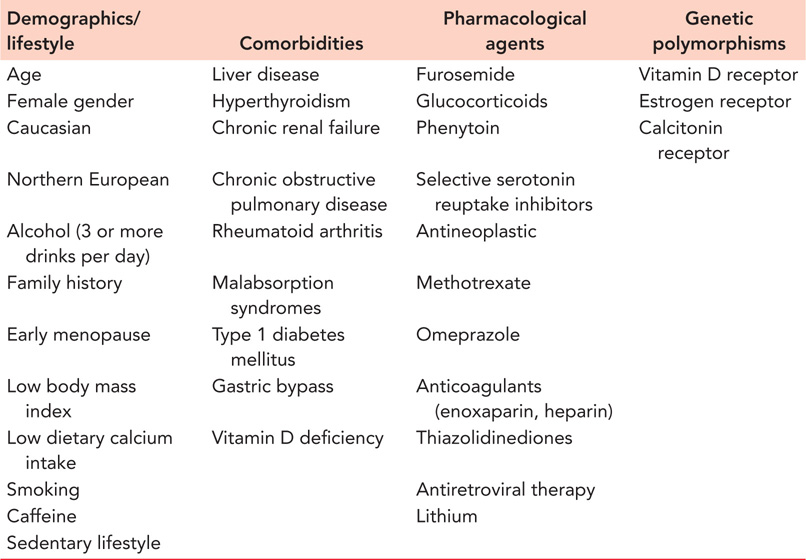 DIAGNOSIS OF AND SCREENING FOR OSTEOPOROSIS

Dual energy X-ray absorptiometry (DEXA) is considered the gold standard for the diagnosis of osteoporosis. DEXA is used to evaluate the bone mineral content of a region of interest, which is defined as the amount of mineral in the specific site scanned. The bone mineral content is then divided by the area measured, and this can be used to derive a value for the BMD.11 The hip is generally the region analysed for diagnostic purposes since it has the highest predictive value for hip fractures as well as overall fracture risk. The L2–L4 region of the lumbar spine is another region commonly evaluated.11,12 A patient’s BMD is compared to the distribution of BMD from a sample of young adult females (aged 20–29 years old), who are used as a reference. The number of SD from this reference range is known as the T score.13 A Z score is also available; this represents the number of SD of the patient’s BMD in comparison to patients in the same age group; however, this value is not used in the diagnosis of osteoporosis.

The United States Preventive Services Task Force recommends a screening DEXA in all women aged ≥65. The National Osteoporosis Foundation also recommends screening in men aged ≥70. It should be noted that, although lower BMD is associated with increased risk, there is no discrete value that clearly differentiates patients who will fracture from those who will not. In fact, although patients with BMD in the osteoporotic range are more likely to fracture than those who are osteopenic, more fragility fractures occur among patients who are in the osteopenic range, because of the higher prevalence of osteopenia.

Several serum and urine markers of bone turnover have been developed. The most commonly used markers include serum bone-specific alkaline phosphatase and amino-terminal propeptide of type 1 procollagen, which are markers of bone formation, and urine or serum telopeptides of collagen crosslinks, which are markers of bone resorption. Although these are generally not used for diagnostic purposes, they may be used to predict the risk of future fracture or to monitor the response to therapy. Additionally, levels of vitamin D can be evaluated to rule out vitamin D deficiency as related to the development of osteoporosis.9

The Fracture Risk Assessment Tool (FRAX) score is an algorithm developed by the World Health Organization based on several cohort studies to predict fracture risk. It has different calculators based on the patient’s country of origin and race, and is validated for individuals aged 40–90. It provides the practitioner with the 10-year probability of fracture and of a major osteoporotic fracture (such as vertebral, wrist, hip or proximal humerus) in patients who are not already on antiresorptive treatment. This tool can be used to determine which patients are most at risk and likely to benefit from treatment. The FRAX calculator takes into account the following factors: patient race, age, sex, weight, height, history of prior fracture, family history of fracture, history of rheumatoid arthritis, current tobacco or alcohol use, current use of glucocorticoids, secondary osteoporosis and femoral neck BMD.9 Although BMD can be used, it is not required to predict risk.

In general, a fracture is considered related to osteoporosis if it occurs with relatively low force such as a ground level fall, which would not be expected to cause a fracture in a young healthy patient. Although patients with osteoporosis are at increased risk of almost any type of fracture, those of most concern include fractures of the vertebral body, proximal femur, distal radius and proximal humerus.

Vertebral body fractures can be diagnosed with plain radiographs. Radiographs should be taken of the entire spine in order to identify fractures at other levels given the high incidence of multiple simultaneous vertebral body fractures. Additional advanced imaging, such as CT or MRI, is generally not necessary unless the patient presents with neurological compromise in which case these imaging techniques should be used to evaluate for any spinal cord compression.

Although the majority of vertebral body compression fractures do not compromise the spinal canal, a thorough neurological examination is indicated in patients with these injuries to rule out any serious complications. Most patients can be treated non-operatively with pain control and bracing. The American Academy of Orthopaedic Surgeons strongly recommends administering a 4-week course of calcitonin, which has been shown to reduce pain significantly when started within 5 days of the fracture event. If patients continue to have severe pain for several weeks after a trial of non-operative treatment, they may benefit from kyphoplasty, which involves expanding the vertebral body height with a balloon followed by the injection of bone cement into the cavity created. Vertebroplasty is also available, where bone cement is injected directly into cancellous bone without cavity creation, however this procedure is not recommended given the much greater risk of cement extravasation into the spinal canal with vertebroplasty in comparison to kyphoplasty. If patients present with neurological compromise and imaging evidence of spinal canal compromise, surgical decompression and stabilization is urgently performed.10,15 Further discussion of vertebral fractures can be found in Chapter 31.