The incidence of fractures in the elderly population is increasing and most occur as the result of low energy falls, usually in their place of domicile.1,2 Most of the literature concerning fractures in the elderly has focused on isolated fractures, particularly those of the proximal femur,3 proximal humerus4 and distal radius.5 Although elderly patients frequently present with more than one fracture,6 there has been little published regarding the epidemiology and outcome of multiple fractures in the elderly.7,8 Potentially, these polytraumatized elderly patients should be managed differently compared to those with isolated fractures, as early intervention and rehabilitation may improve outcome.9 Early medical assessment, with the aim of optimizing physiological status and early rehabilitation, is now an accepted part of the management of the multiply injured elderly patient.10

Despite the relative paucity of multiple fractures in the elderly, which occur in approximately 5% of patients presenting with a fracture, the burden upon the trauma workload in the future will likely increase with the growing elderly population and with increasing longevity. This will result in major repercussions on medical resources, both acutely and for the ongoing care of these frail patients.11,12

Patients with multiple fractures are more likely to be admitted to hospital, have a longer length of stay, and are less likely to return to their original place of domicile.7,8 Hence, the optimal management of these patients is essential to minimize the impact of their injuries and optimize outcome. In order to do this it is essential to have an understanding of the epidemiology and the current outcome of multiple fractures in the elderly.

This chapter presents the prevalence of multiple fractures in the elderly and describes the mechanisms of injury, common injury patterns and the effect of socioeconomic status. The evidence surrounding admission rates, operative intervention, length of stay, rehabilitation and mortality will be discussed.

The Centers for Disease Control and Protection in the United States has suggested that the cost of falls in 2020 may reach $54.9 billion in the USA alone.13 The main reason for this increased cost is a growing elderly population in the Western world, as it is estimated that the population aged 65 years or more will almost double by 2030.14 A third of all fractures occur in patients above 65 years of age, and a quarter occur in patients above 75 years of age.6 The majority of these patients suffer fragility fractures following low energy mechanisms, which account for 30% of male fractures and 66% of female fractures.6

There is relatively little literature describing the epidemiology and outcome of multiple fractures other than that published from Edinburgh.7 Much of the data presented in this chapter will be from this work, with supportive data presented when available.

The study population discussed in this chapter is based on all patients presenting to the Royal Infirmary of Edinburgh with fractures during a 1-year period between July 2007 and June 2008, which were prospectively documented. The Royal Infirmary of Edinburgh is the only hospital receiving adult trauma for a predominately urban population of 780,000, of which 15.4% are 65 years of age or above.15 Patients with multiple fractures are divided into three groups for the purposes of this chapter: upper limb multiple fractures only, lower limb multiple fractures only and combined, involving both the upper and lower limbs. Pelvic fractures are included with lower limb fractures.

It has been estimated that about one-third of adults aged 65 years or more who live at home will fall each year, which increases to two-thirds for adults who live in residential homes.16 Approximately 10% of falls result in a serious injury17 and a recent Swedish study has suggested that 7% of falls in the elderly result in fracture.18 It is likely that the incidence of fall related fractures will increase in the future, resulting in considerable expense for healthcare systems. 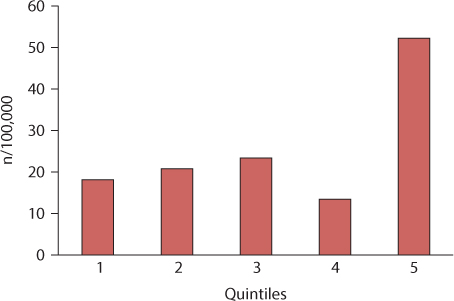 Figure 15.1 A histogram showing the relationship between social deprivation and the incidence of fractures. (Reproduced with permission and copyright © of the British Editorial Society of Bone and Joint Surgery from: Clement ND, et al. J Bone Joint Surg Br 2012;94(2):231–6.)

Table 15.1 Demographic characteristics of elderly patients who present with single or multiple fractures from all modes of injury 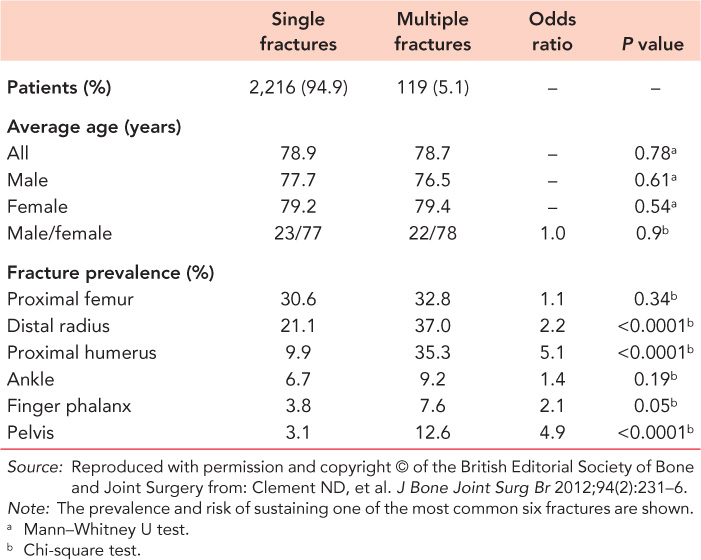 Multiple fractures in the elderly may occur as a result of high energy or low energy injuries. However, it is not correct to assume that the primary causes are motor vehicle accidents or falls from a height.7 Certainly some combinations of fractures indicate the high energy mechanism through which they were sustained, such as the association of calcaneal and spinal fractures. Conversely, the proximal humeral fracture associated with a hip fracture is a relatively common presentation, occurring in approximately one in 50 patients presenting with a hip fracture, and is more likely to be sustained through a simple fall.7

Table 15.2 Numbers and percentages of multiple fractures caused by different modes of injury

Table 15.3 Comparison of the demographic characteristics of double fractures caused by a fall with those caused by other modes of injury 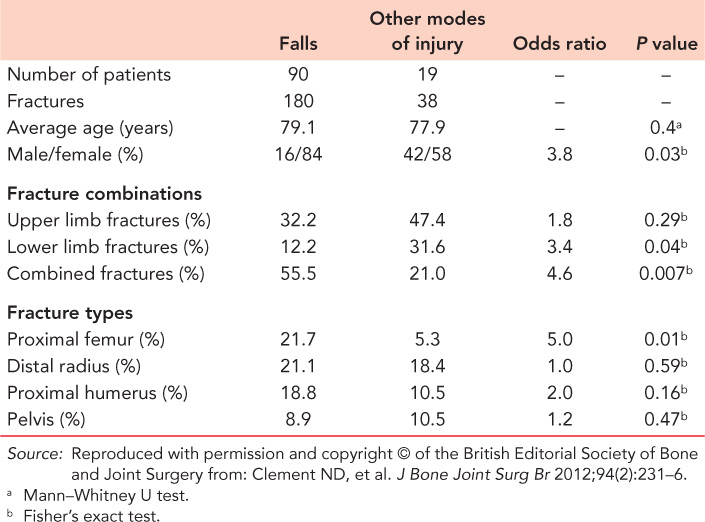 Table 15.4 Epidemiology of fractures that occurred most commonly in fall-related double fracture combinations

Over 50% of elderly patients have combined upper and lower limb fractures of which proximal femoral fractures with proximal humeral or distal radial fractures are the most common (Table 15.5). The Edinburgh data showed 16 different combinations, but only seven occurred more than once during the year. The proximal femur was involved in over two-thirds of the fracture combinations.

These patterns of fall related injuries probably reflect the natural epidemiological history of fragility fractures, as the mean age of isolated distal radial, proximal humeral and proximal femoral fractures is 56, 65 and 81 years, respectively.6 Hence, fragility fractures of the upper limb occur at a younger age, which may explain the observed age difference between the upper limb multiple fracture group and the lower limb and combined fracture groups. 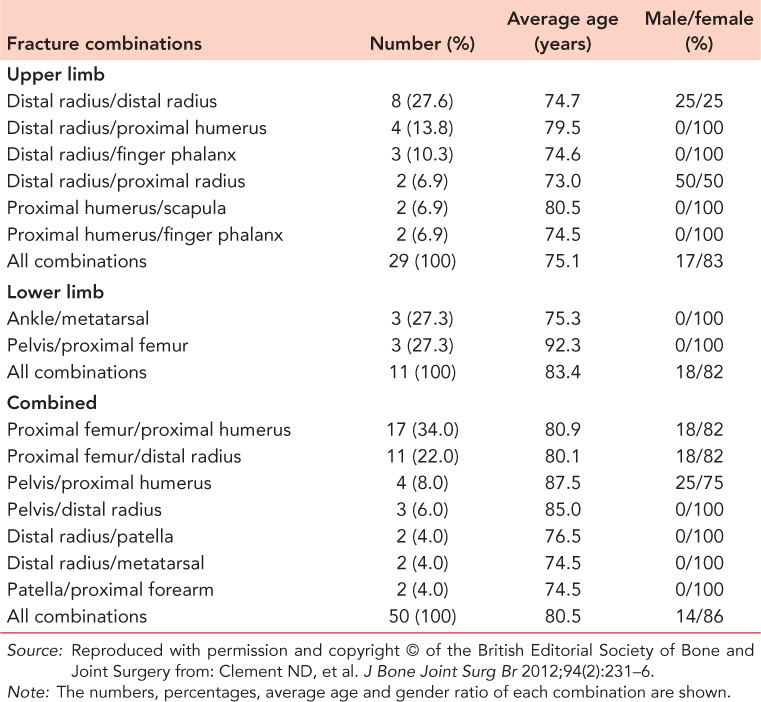