Laminoplasty for Multilevel Myelopathy and Radiculomyelopathy

Laminoplasty for Multilevel Myelopathy and Radiculomyelopathy

In 1968, Dr. Yoshihito Kirita devised a sophisticated technique of laminectomy, in which the laminae were thinned and divided at the midline by a high-speed drill and then removed. Being safe and effective, Kirita’s technique brought remarkable progress in the surgical management of cervical compressive myelopathy.1 However, postoperative kyphosis, vulnerability of the unprotected spinal cord, and formation of a laminectomy membrane still remained as unsolved problems due to the total removal of the posterior supporting structures.2 In 1973, Dr. Susumu Hattori and coworkers devised an expansive Z-laminoplasty, in which the spinal canal was reconstructed by the preservation of the laminae, to address such problems.3 However, this technique did not prevail because it was technically demanding and time-consuming. Dr. Kiyoshi Hirabayashi used a modification of Kirita’s method, in which the spinal cord was decompressed by making bony gutters at both lamina–facet junctions followed by en-bloc resection of the laminae. The idea of open-door laminoplasty evolved when Hirabayashi noted that the pulsation of the dural tube was present when he lifted one side of the laminae, indicating that sufficient decompression was obtained without totally removing the laminae. In 1977, he performed the first case of the procedure, which he named “expansive open-door laminoplasty” (ELAP). In this procedure, only the ventral cortex in one side of the gutter was penetrated, leaving that in the other side, which serves as the hinge, intact.4 Since then, the concept of laminoplasty gained widespread acceptance in Japan, and the advent of double-door laminoplasty by Kurokawa followed.5 These two techniques have formed the base that enabled the development of many modified procedures, and the concept of laminoplasty has spread worldwide.

Although ELAP is not a radical decompression surgery that directly removes anterior pathological structures, such as protruded disks, osteophytes, and ossified ligaments, it has a total decompression effect induced by the dorsal shift of the spinal cord as long as cervical alignment is maintained in lordosis.6 The posterior complex, including the lamina and supra- and interspinous ligaments, are preserved, serving as the reattachment sites for the paracervical muscles that may help restore cervical stability and maintain preoperative cervical lordosis.7

Several studies have indicated that the decompression effect of ELAP is virtually equivalent to that of laminectomy and anterior decompression followed by fusion.8,9 Herkowitz8 also concluded from his biomechanical study that stability of the cervical spine after ELAP was not significantly different from that of the intact spine.

The incidence of adjacent segment pathology, including instability, disk herniation, and spondylotic changes, that required salvage operation was much lower after ELAP than after anterior decompression and fusion.10

Although several technical modifications, such as the use of bone graft, spacers, and plates, have been developed, this simple yet innovative technique forms the basis for all other procedures and still remains as the most viable choice of the surgical treatment for compressive myelopathy. When compared with other modified techniques, ELAP is much simple and safer, with a shorter operating time, less bleeding, and a lower incidence of complications, all of which contribute to less surgical impact on the patients.10–14

Before the recognition of the concept of spinal stenosis, our indication for ELAP was based simply on the levels of the pathology. If the spinal cord compression was confined within three segmental levels, anterior decompression and fusion was selected, whereas ELAP was indicated for patients with a lesion extending four or more segmental levels.4

Our surgical strategy has gradually changed in accordance with the recognition of the concept of spinal stenosis. Our long-term follow-up study on anterior cervical fusion revealed that radiographic adjacent segment pathology developed in 85% of patients and subclinical compression of the dura was found in 65% of the patients who underwent magnetic resonance imaging (MRI). Revision surgery was necessary in over 10% of patients because of recurrence of myelopathy caused by spinal cord compression at the adjacent segments, and the majority of the patients undergoing revisions had developmental spinal stenosis (anteroposterior [AP] diameter of the spinal canal under 13 mm on lateral X-ray films), which were detected in a retrospective review of preoperative radiographs.15

Therefore, at our center we believe that the presence or absence of developmental spinal stenosis is the determining factor when choosing a surgical option for patients with cervical myelopathy. We consider ELAP as the treatment of choice for all patients with developmental spinal stenosis even if the patient has a single-level disk herniation, spondylosis, or segmental ossification of the posterior longitudinal ligament (OPLL).15–17 If a patient has a multilevel lesion that extends beyond two segmental levels, at our center we prefer ELAP to anterior fusion even if the patient has no spinal stenosis. Our recent indication of anterior cervical fusion for cervical myelopathy, therefore, is limited to patients who have a single-level lesion without spinal stenosis.15

If a patient who has radiculopathy associated with myelopathy presents unilateral arm pain, numbness, and weakness, then an ELAP is indicated. By placing the open-side gutter on the side of the arm pain and making the gutter slightly wider and outside, the multilevel intervertebral foramen can be decompressed simultaneously. Sometimes we can even see the posterior aspect of the root sleeve, if we simply place the gutter well outside. Complete foraminotomy can be added by removing the pieces of bone along the root sleeve by a Kerrison rongeur to thoroughly decompress the nerve root; however, this is usually unnecessary because most of the nerve root compression occurs at the entrance of the nerve root canal by a bony spur of the uncinate process, and adequate decompression can be obtained without complete foraminotomy. Some investigators reported the efficacy of laminoplasty in patients with radiculopathy alone,18 although we have had no experience with this situation.

We used to expand the spinal canal routinely from C3 to C7 for patients with cervical spondylotic myelopathy (CSM), because the most significant risk factor for the development of myelopathy was preexisting spinal stenosis. We believed that the expansion of the whole spinal canal was theoretical as well as essential to relieve the symptoms.4,15,19 However, from the analyses of preoperative MRIs, we have found that the spinal cord was not compressed at every level. The most commonly affected level was C5/6 followed by C4/5 and C6/7. C3/4 and C7/T1 levels are less frequently involved. Recently, we routinely expand C4, C5, and C6 laminae, and excise the upper half of C7 lamina to decompress the C4/5, C5/6, and C6/7 levels. The C7 spinous process is spared whenever possible to reduce the incidence and magnitude of postoperative axial pain. In elderly patients, the involvement of C3/4 level is often the case, because they often have advanced spondylosis at C5/6 and C4/5 levels, which is likely to put greater stress on C3/4 causing instability and spinal cord compression at the level.20 If C3/4 level is involved, we undercut the ventral cortex of the C3 lamina in a dome-like fashion and preserve C3 spinous process and the lamina to avoid detachment of the insertions of the semispinalis cervicis muscle, which plays an important role to maintain cervical lordosis, to the tips of the C2 spinous process.

However, for OPLL patients, expanding the spinal canal more extensively in both sagittal and transverse planes is recommended, because progression of OPLL, either in a longitudinal or transverse direction, which may be caused by biological stimulation attributable to surgical invasion, biomechanical stresses, and hereditary disposition, was present in 66% of the patients in our follow-up study.15,19,21 Therefore, we expand all levels where spinal cord compression is evident on MRI, even if C2 and C7 are to be involved. Detaching the insertion of the semispinalis muscle from the C2 spinous process seldom becomes problematic, because OPLL patients usually have a stiff spine due to ossification and are unlikely to develop severe postoperative kyphosis.19,22

The use of a high-speed drill, especially a diamond bur, is essential when perforating the ventral cortex of the laminae. A small lamina spreader together with a fine-tipped Kerrison rongeur make the removal of the ligamentum flavum safe and easy. Otherwise, no other special surgical instruments are necessary, and the usual instruments for cervical laminectomy suffice.

Positioning of the Patient

The patient is placed in the prone position on the surgical table. Sponge pads are placed underneath the bilateral shoulders and iliac crests to relieve excessive pressure on the chest and abdomen. The head is securely fixed with a Mayfield fixator that is firmly attached to the surgical table. Both knees are bent at the right angle, and the lower legs are firmly fixed to shin supports attached perpendicular to the surgical table. Then, the table is tilted cranially upward at an angle of 20 to 30 degrees to reduce venous congestion. The neck is slightly flexed to open the interspinous spaces and to bring the posterior aspect of the neck parallel to the horizontal plane (Fig. 1.1).

The external occipital protuberance (inion) and the spinous processes of C2 and C7 serve as landmarks of the midline. Make a straight midline incision of appropriate length, usually from C2 to C7, and follow the central plane along the nuchal ligament down to the spinous processes. Be sure to always stay in the midline to avoid inadvertent bleeding. Retraction of the skin and subcutaneous tissues bilaterally with Gelpi or Adson retractors helps clarify the midline. Identify the prominent C6 or C7 spinous process first, then proceed cranially so as not to miss the midline. 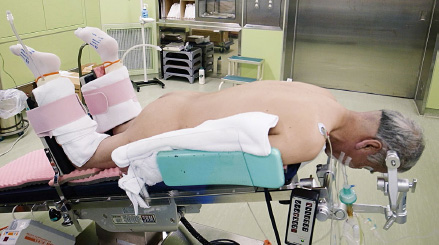 Expose the tips of the spinous processes with a cautery, then strip the bilateral paracervical muscles from the lateral aspects of the spinous process and the laminae usually from C4 to C6 with a small Cobb elevator or a cautery, taking care not to violate the facet joint capsules. The caudal aspect of the C3 lamina and the cephalad part of the C7 lamina are also exposed, but the cephalad part of the C3 lamina and the C7 spinous process are left unexposed. The supraspinous and interspinous ligaments at C3/4 and C6/7 are removed with a forceps. Care should be taken not to damage these ligaments between C4/5 and C5/6 so as to maintain the integrity of the laminar door. After the completion of the exposure, the tip of the long spinous process of C6 is excised and shortened to match the length to those of C4 and C5 and thus to avoid the closure of the laminar door by the pressure exerted from the paracervical muscles when closing the wound.

Once paracervical muscles are detached from the laminae, the retractors are placed to hold the surgical field, and the open-side gutter is made first at the junction of the laminae and facet joints by a high-speed drill equipped with a 5-mm coarse diamond bur (Fig. 1.2a). To avoid excessive bleeding from the epidural venous plexus, the ventral cortex can be penetrated with a diamond bur rather than removing it with a Kerrison rongeur. Be sure to feel the “loss of resistance” when the ventral cortex is penetrated (Fig. 1.2b). If the bleeding from the epidural venous plexus is encountered, it can be managed effectively by a gentle pack of hemostatic agents such as fibrillar collagen (Avitene®, Davol Inc., Warwick, RI) and absorbable gelatin (Gelfoam®, Pfizer Inc., New York, NY).

The ligamentum flavum at the upper and lower ends of the laminar door, usually at C3/4 and C6/7, are removed with a thin-bladed Kerrison rongeur. As described above, if spinal cord compression is present at the C3/4 level, the ventral cortex of the C3 lamina is undercut by a 4-mm diamond bur in a dome-like fashion (Fig. 1.3a) and if C6/7 is involved, the upper one third to one half of C7 lamina is removed by a 5-mm diamond bur (Fig. 1.3b). 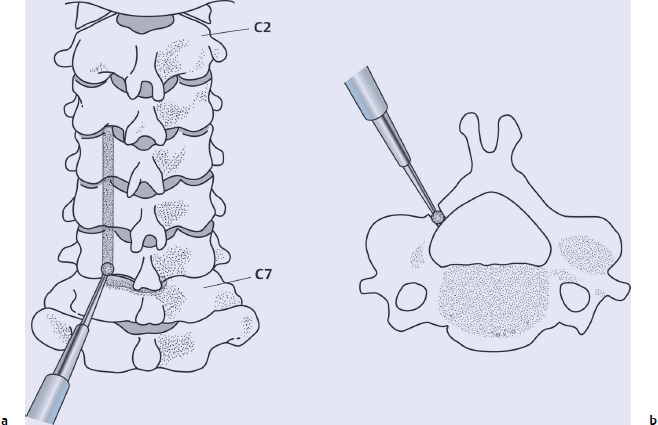