O2 being reached within ~80 seconds. During high-intensity exercise aerobic resynthesis of ATP gradually increases with time and the oxidative contribution becomes dominant in gymnastics routines longer than ~60 seconds. During vaults, pommel horse, bars, and rings routines the anaerobic supply of energy predominates but during floor exercises and Rhythmic Gymnastics routines aerobic metabolism is the principal source of energy. In addition, oxidative metabolism can use carbohydrates, free fatty acids, and amino acids as substrates and although this may be of minor importance during gymnastics competitions it is important as a glycogen-sparing mechanism during the many hours of training in which elite gymnasts engage.

Attempts have been made to directly measure the energy cost of gymnastics routines for over 50 years but technological difficulties with apparatus and flawed methodologies have limited the interpretation of the data.

Jemni (2011) described studies that required male gymnasts to perform their routines while breathing through a mouthpiece into a Douglas bag. At the end of each routine, gymnasts held their breaths until the investigators attached another bag to collect the expired air during recovery. Analysis of the respiratory gases indicated that the event with the highest energy cost was the floor followed in decreasing order by the pommel horse, rings, high bar, parallel bars, and vault. Another investigation measured the excess post-exercise oxygen consumption during the first 30 seconds following female gymnastic routines and reported floor exercises to have the highest energy cost followed by the uneven bars, the balance beam, and the vault.

In a more recent investigation into the energy cost of ball routines in Rhythmic Gymnastics, Guidetti et al. (2000) measured heart rate (HR) during the routines and blood lactate accumulation on completion of the routines. To facilitate the interpretation of the data the 14–16-year-old girls had their HR, p

O2, and blood lactate accumulation monitored during an incremental treadmill test to exhaustion. During the ball routine the girls’ mean peak HR was 188 beats/min. The mean average HR during the whole ball routine was 177 beats/min, which corresponded to 88.2% of treadmill-determined maximum HR. In this study the ball-routine HRs were similar to the HRs at TLAC on the treadmill and the post-exercise blood lactate confirmed that the girls performed their competitive routines at an intensity around their TLAC. From p

The assessment and interpretation of young people’s muscle strength and aerobic fitness are well documented and data on elite young athletes are readily available even though they are often difficult to interpret. The responses of young people to short-term high-intensity exercise in relation to age, growth, maturation, and sex are less clear and our understanding of gymnastics-related exercise is clouded by technical issues, including the nonspecificity of current methods of assessment.

For both ethical and methodological reasons, the muscle biopsy technique has rarely been used with healthy children. The few muscle biopsy studies that have been performed with children have focused on resting and post-exercise measures and have generally been restricted to small samples of boys. Nevertheless, some interesting patterns have emerged from the literature.

Muscle fiber size increases with age from birth to adolescence and in males into young adulthood. The percentage of type I fibers in the vastus lateralis decreases in healthy males over the age range 10–35 years. No clear age-related fiber distribution changes have been observed in females but this might be a methodological artefact as few data on girls and women are available. Studies comparing the muscle fiber composition of boys and girls are confounded by the small number of participants and large interindividual variations that cloud statistical analyses. However, there is a consistent trend with adolescent and young adult males exhibiting, on average, 8–15% more type I fibers in the vastus lateralis than similarly aged females in the same study.

In the 1970s, Eriksson and his colleagues (Eriksson, 1980) carried out a series of muscle biopsy studies of small samples of 11–15-year-old boys, which have influenced the interpretation of pediatric exercise metabolism for almost 40 years. No similar data are available on girls. Muscle biopsies from the quadriceps femoris revealed resting ATP stores that were stable over the age range of 11.6–15.5 years and similar to values others had reported with adults. The concentration of ATP remained unchanged following 6 min bouts of submaximal cycle ergometer exercise but minor reductions were observed following maximal exercise.

Eriksson reported levels of PFK and succinic dehydrogenase (an aerobic enzyme) to be 50% lower and 20% higher, respectively, than adult values his group had observed previously. They suggested that children might have a lower glycolytic and more enhanced oxidative capacity than adults during exercise. More recent muscle biopsy analyses have been generally supportive and reported glycolytic enzyme activity to be positively correlated with age and oxidative enzyme activity to be negatively correlated with age over the age range 6–17 years, in both males and females. A consistent finding is that the ratio of glycolytic to oxidative enzyme activity is higher in adults than in adolescents and children, indicating a relatively greater potential for anaerobic exercise in adults.

Magnetic resonance spectroscopy (31P-MRS) provides in real time a window through which muscle can be interrogated during exercise. 31P-MRS studies are constrained by exercising within a narrow tunnel and the need to synchronize the acquisition of data with the rate of muscle contraction. There is a leap of faith in the extrapolation of exercise data from a specific muscle group, normally the quadriceps, using laboratory technology to the whole-body activity of a gymnastics routine, but 31P-MRS studies have provided new insights into the physiology underpinning young people’s performance.

31P-MRS allows the monitoring of ATP, PCr, and inorganic phosphate (Pi) spectra during exercise. During an incremental exercise test to exhaustion, Pi increases with a corresponding decline in PCr. The expression of muscle Pi/PCr against power output therefore provides an index of mitochondrial function. In other words, a muscle with a greater oxidative capacity will require a lower change in Pi/PCr for a given increment of power output. An incremental exercise test to exhaustion results in nonlinear changes in the ratio Pi/PCr plotted against power output. As power output increases an initial shallow slope is followed by a steeper slope and the transition point is known as the intracellular threshold (ITPi/PCr). The ITPi/PCr is analogous to other metabolic thresholds such as the TLAC.

These findings are supported further by studies that have monitored the resynthesis of PCr during recovery from maximal exercise and reported boys to have a faster PCr τ during recovery than men. The lesser accumulation of Pi and fall in PCr during exercise above TLAC is consistent with an enhanced recruitment of type I muscle fibers in children compared to adults and in boys compared to girls. This indicates a reduced mitochondrial oxidative capacity with age.

An understanding of p

O2 kinetics is important for all sports that require step changes in exercise intensity (e.g., changes of pace in gymnastics routines). It is technically difficult to measure the p

O2 kinetics response during gymnastics activities and there are no data available on young people. In the laboratory p

O2 kinetics are studied by the use of a step transition where a period of low-intensity exercise, such as pedaling a cycle ergometer without a resistance, is followed by a sudden increase in exercise intensity to a predetermined level.

O2 measured at the mouth. This cardiodynamic phase (phase I), which lasts ~15 seconds is independent of

O2 at the muscle (mO2) and is associated with an increase in cardiac output that occurs prior to the arrival at the lungs of venous blood from the exercising muscles. Phase I is followed by an exponential increase in p

O2 to a steady state during exercise below the TLAC. Phase II p

O2 kinetics are described by their τ and it has been demonstrated that they reflect within ~10% the kinetics of mO2 and therefore provide a noninvasive window into muscle metabolism.

During phases I and II, ATP resynthesis cannot be supported fully by oxidative phosphorylation and the additional energy requirements are met from muscle oxygen stores, PCr, and glycolysis. During exercise below the TLAC children reach a steady state in p

O2 within ~100 seconds, but during exercise above the TLAC the overall oxygen cost of exercise increases over time. A slow component of p

O2 is superimposed upon the primary component and the achievement of a steady state is delayed by ~600–900 seconds. The mechanisms underlying the p

O2 slow component remain speculative but appear to be a function of muscle fiber distribution, motor unit recruitment, and the matching of oxygen delivery to active muscles.

O2 kinetics than boys. This greater aerobic contribution to ATP resynthesis in children compared to adults and, during high-intensity exercise, boys compared to girls suggests an enhanced oxidative capacity, which might be due to greater oxygen delivery or better oxygen utilization by the myocyte or both. Muscle blood flow and therefore oxygen delivery during exercise has been reported to decrease with age in boys aged 12–16 years. Peak

O2, which is primarily dependent on oxygen delivery, is not related to p

O2 kinetics therefore reflect an enhanced capacity for oxygen utilization by the mitochondria, which might be partially explained by an enhanced aerobic enzyme profile and/or reduced creatine concentration (as inferred from muscle PCr stores).

Girls have a greater relative p

O2, the highest rate at which oxygen can be consumed during exercise. In the laboratory peak

O2 laboratory data must be interpreted with caution.

O2 (L/min) shows a linear increase with chronological age and girls’ data demonstrate a similar but less consistent trend with some studies indicating a tendency to level-off at about 14 years of age. From 8 to 16 years peak

O2 increases by ~150% and ~80% in boys and girls, respectively, with the sex difference rising to ~35% by age 16. The physiological explanation for sex differences in peak

O2 during childhood is complex but the balance of evidence suggests that, although there are no sex differences in maximal HR or arterial-venous oxygen difference, maximal stroke index is higher in boys than in girls and therefore boys deliver more oxygen to the muscles. During adolescence boys’ greater muscle mass is the dominant influence in enhancing peak

O2 and in late adolescence this is reinforced by boys’ higher concentration of blood hemoglobin. 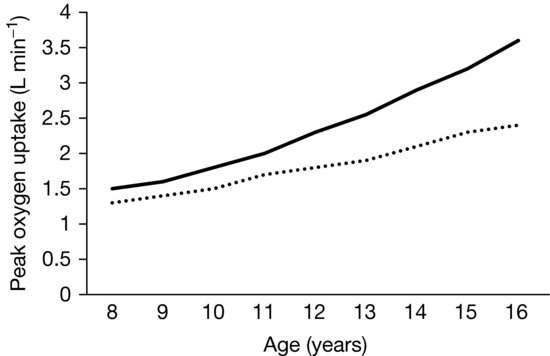