In this chapter, we shall review the GH/IGF-1, HPG, and HPA axes, initially focusing on developmental changes that occur as a child ages and matures and then moving to a discussion of the effects of exercise on these systems. We shall then review our current understanding of factors influencing energy balance in the individual, particularly the factors controlling food intake, hunger, and satiety in the exercising adolescent. Finally, we shall discuss the interplay between neuroendocrine mechanisms regulating energy balance and maturation of the HPG axis.

Although there is a large amount of data on these systems in normal individuals and a significant amount in athletes, there are not many data specific to gymnasts. We shall cover these where available.

GH is produced in the somatotropes of the anterior pituitary gland under the control of two hypothalamic regulatory hormones, GH releasing hormone (GHRH) and somatostatin, with GHRH stimulating production and somatostatin inhibiting it (Figure 3.2). Once released, circulating GH interacts with its receptors on the cell membranes of GH-responsive tissues. In the liver, GH stimulates secretion of IGF-1 from hepatocytes, resulting in the majority of circulating IGF-1. Additional IGF-1 is produced locally within many tissues. Both circulating and locally produced IGF-1 are anabolic, acting through the IGF-1 receptor on many different tissues to increase cell growth, inhibit cell death, and promote cellular differentiation. GH also stimulates secretion of IGF-2, which is thought to be mainly related to fetal growth and perhaps tissue repair. GH also has direct effects independent of IGF-1 and IGF-2. Acting through the GH receptor, GH stimulates cartilage growth and differentiation and promotes bone growth, increases lipolysis in adipose tissue, and stimulates amino acid uptake in muscle. IGF-1 acts in a negative feedback fashion to decrease pituitary GH release. Additionally, many neurotransmitters and neuropeptides also play roles in GH production, many of which are also active in regulating other endocrine axes, the hypothalamic stress response, and energy intake. An example of this is ghrelin, a peptide produced in the stomach that has potent orexigenic (appetite stimulating) properties. Although the physiologic relevance of this is unclear, ghrelin also acts to increase GH secretion (see Section “Neuroendocrine regulation of appetite/satiety”). In boys, GH secretion increases during mid-puberty, and the mean daily GH concentration correlates with growth rate (Figure 3.3). Exercise also influences the GH/IGF-1 axis. In gymnastics, initiation of intense exercise may reduce circulating IGF-1, possibly through the effect of higher levels of inflammatory cytokines. Prolongation of the exercise results in recovery of IGF-1 levels, possibly related to a decline in inflammation. These levels potentially reach concentrations above baseline.

Figure 3.2 Regulation of growth hormone (GH) secretion occurs via the positive effects of GH releasing hormone (GHRH) and the negative effects of somatostatin. GH leads to target tissue release of insulin-like growth factor-1 (IGF-1), which provides regulatory control via its effects on GHRH and somatostatin release. 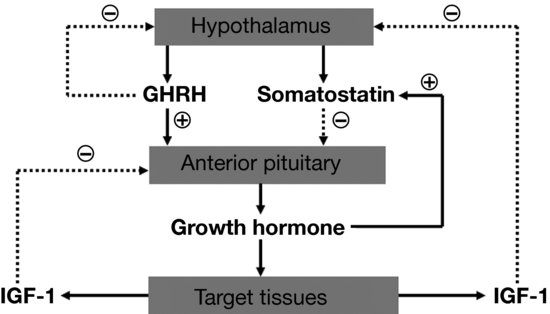 Figure 3.3 Results from Martha et al. (1989) of a cross-sectional study of growth hormone (GH) secretion in healthy males of normal stature. The mean 24-hour GH concentration increased in late puberty and then declines into adulthood. Superimposed is the standard height velocity curve for this age range, showing the relationship of GH secretion to linear growth rate. (Copyright 1989, The Endocrine Society.) 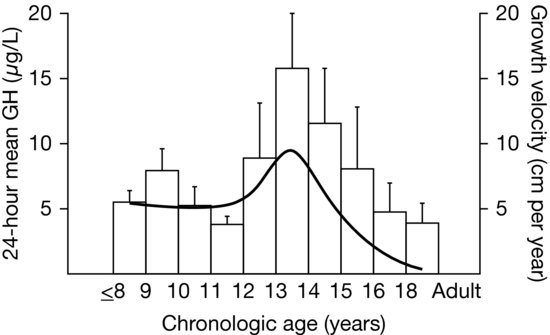 Perhaps more than any other endocrine axis, the HPG axis changes dramatically over the lifespan. In a reproductively mature individual, gonadotropin releasing hormone (GnRH) is produced in the hypothalamus and secreted into the hypothalamic-pituitary portal system in a pulsatile fashion. Control of GnRH secretion is poorly understood, but involves numerous inputs communicating nutritional status, physical and emotional stress, and other factors (see Section “HPG axis in adolescence”). In the pituitary gland, the pulsatile effect of GnRH promotes synthesis and secretion of the gonadotropins, luteinizing hormone (LH), and follicle stimulating hormone (FSH). In the male, LH promotes testosterone production from testicular Leydig cells, and FSH increases Sertoli cell and seminiferous tubule growth and leads to increased testicular volume. In the female, estrogens, primarily estradiol, promote breast development, changes in distribution of adipose tissue, and cause proliferation of the endometrium. The physical changes of puberty are assessed using the Tanner stages of pubertal maturation (Table 3.1). Testosterone causes the well-known increases in muscle mass and strength in addition to normal male pubertal development. In the mature female, LH and FSH have complex and variable effects that lead to estrogen secretion and ovulation. In general, the sex steroids (estrogens and testosterone) act via negative feedback effects to suppress gonadotropins, particularly LH. The exception to this is the transient positive feedback effect of estradiol that causes a surge in LH production and triggers ovulation in the mid-portion of the menstrual cycle. Testicular Sertoli cells and ovarian granulocytes secrete inhibins, a class of hormones that act centrally to suppress FSH secretion (Figure 3.4).

Figure 3.4 Hypothalamic-pituitary-gonadal (HPG) axis in males (left) and females (right). Gonadotropin releasing hormone (GnRH) stimulates pituitary release of the gonadotropins [luteinizing hormone (LH) and follicle stimulating hormone (FSH)]. LH is the primary stimulus for testicular testosterone secretion, while both FSH and LH are required for normal ovarian estradiol production. In males, testosterone provides negative feedback for LH secretion, while inhibin suppresses FSH release. The situation in females is more complicated, as estradiol can inhibit GnRH release, but can also provide positive feedback during the mid-point of the menstrual cycle.

Cortisol is a naturally occurring corticosteroid (glucocorticoid) that has wide-reaching and complex actions that influence nutrition and energy distribution, immune function, and growth. It is the product of the adrenal cortex and is produced under the trophic influence of pituitary-derived adrenocorticotropic hormone (ACTH). ACTH production is stimulated by hypothalamic CRH and vasopressin. As is the case for the GH/IGF-1 and HPG axes, the HPA axis also receives many other inputs, including the light/dark cycle, feeding schedules, immune regulation, and many neurotransmitters that mediate the effects of exercise and physical and psychic stress.

As discussed in the preceding section, hypothalamic-pituitary function varies over the lifespan. In utero, GH is relatively unimportant, as evidenced by individuals with Laron dwarfism caused by loss of the GH receptor. Such infants are within 10% of normal size at birth and only begin to demonstrate growth failure in the first few months after birth. However, IGF-1 and IGF-2 are critical for fetal growth, as is insulin. During infancy and childhood, IGF-2 seems to be less important, although IGF-1, insulin, and thyroid hormone become critical for growth. In the male fetus, testosterone plays a critical role in the development of normal male internal and external genitalia and likely has effects to “masculinize” the brain and lead to male-typical behavior patterns. Sex steroids in the female fetus do not appear to be involved in physical development, although in both males and females, the transient surge of sex steroids in the first 6 months after birth (“minipuberty of infancy”) may play roles in later gonadal function. Neither estradiol nor testosterone is produced in large amounts during later infancy or childhood.

Between the age of about 3 years and the onset of puberty, linear growth continues at a relatively constant velocity (see Chapter 2) under the continuing influence of the GH/IGF and thyroid axes. The HPG axis, which had been active at a low level for approximately 6 months in boys and as long as 2 years in girls, remains quite suppressed until the onset of puberty (see Section “HPG axis in adolescence”). However, the HPA axis changes its activity usually between the ages of 6 and 8 years. There are no differences in the secretion of ACTH or cortisol or the salt-retaining hormone, aldosterone; however, the inner zone of the adrenal cortex (zona reticularis) begins to increase in size in both sexes and to secrete the adrenal androgen precursors, dehydroepiandrosterone (DHEA) and its sulfate (DHEA-S), and androstenedione. This zone continues to proliferate, and the levels of these androgen precursors increase until late adolescence/young adulthood, likely under the influence of a pituitary factor distinct from ACTH. These morphological and biochemical changes are translated into a low magnitude and quite variable mid-childhood (~8 years old) growth spurt and the outward signs of adrenarche: pubic and axillary hair and axillary sweating (“pubarche”).

The GH/IGF-1 system remains pulsatile throughout this period of growth and likely reflects the level and distribution of body fat and lean body mass, only to show a remarkable augmentation as very early pubertal maturation ensues (see Section “GH/IGF-1 axis in adolescence”).

During this time between the “minipuberty” of infancy and the onset of puberty, the HPG axis is active at very low circulating concentrations of gonadotropins and sex steroid hormones. This state is likely due to the exquisite sensitivity of the GnRH-secreting neurons to feedback from the minute (compared to pubertal) levels of the sex steroid hormones. As puberty unfolds, this sensitivity to negative feedback lessens and the hypothalamus and pituitary begin to secrete GnRH and gonadotropins, respectively—at first at night and then during the day as well (see Section “HPG axis in adolescence”). This altered HPG activity underlies the physical changes of pubertal maturation.

Effects of physical activity on the endocrine system in prepubertal children

Physical activity (PA) refers to any body movement produced by the skeletal muscle that results in a substantial increase over resting energy expenditure. It has historically been viewed as important for healthy growth, but the type, frequency, intensity and duration required to support growth are not known with certainty. Nutrition (and energy balance) is presumably the non-pituitary, non-sex-steroid-mediated mechanism that surveys the “size” of the child and signals that an adequate supply of energy is available to promote and sustain the processes of growth and maturation.

Three maturity indicators have been used in studies of young athletes—(1) skeletal age (SA), (2) secondary sexual characteristics, and (3) the adolescent growth spurt in height. Among these, the SA is the only one appropriate for the prepubertal child or for longitudinal studies beginning prepubertally and finishing during or after pubertal maturation.

Few data are available in athletes less than 10 years of age. Most data from boys note a spectrum including some with advanced or delayed SA compared to age-matched controls. After the age of 10–11 years and until mid- to late puberty, the male athletes who continued to participate were more likely to be skeletally advanced (Figure 3.5). Adolescent gymnasts were the single exception among male athletes, for they were likely to present with delayed SA.

Figure 3.5 Male competitive soccer players were more advanced in puberty and were taller than age-matched controls. In this cross-sectional study (Cacciari et al., 1990), 175 boys, aged 10–16 years, were compared to 224 boys who had never participated regularly in sports. The athletes were more advanced in all measures of pubertal maturation, including testicular volume. Testicular volume did not differ in prepubertal athletes and controls, but in pubertal subjects, mean testicular volume was 3 mL greater in athletes than controls, suggesting more rapid maturation in athletes. Bone age was more advanced, and the differences in height between athletes and controls did not persist when corrected for bone age. (With kind permission from Springer Science and Business Media.) 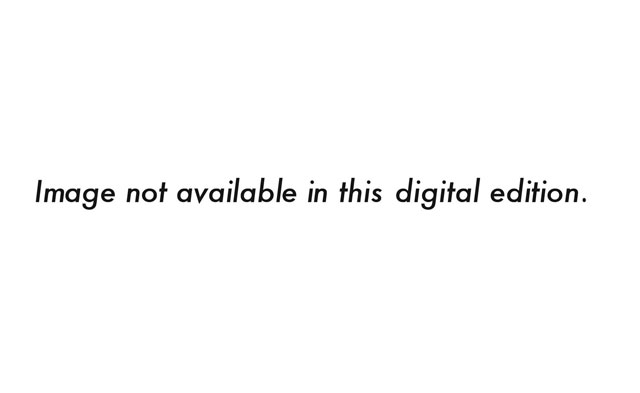