Biology, Physiology, and Morphology of Bone

4 Biology, Physiology, and Morphology of Bone

Resorption of bone is mediated by multinucleated hematopoietic cells, the osteoclasts.

The most abundant cell type in bone is the osteocyte.

Bone is continuously rebuilt, a process known as bone remodeling.

Structure and Composition of Bone

Bone is a specialized connective tissue that serves (1) locomotion by providing the insertion site of the muscles, (2) protection of the internal organs and the bone marrow as well, and (3) metabolic function such as storage and provision of calcium to the body. Bone consists of cells and the extracellular matrix, which is composed of type I collagen fibers and a number of noncollagenous proteins. The specific composition of the bone matrix allows its mineralization, which is a specific feature of bone.

Two major types of bones exist: flat bones, which are built by intramembranous ossification, and long bones, which emerge from endochondral ossification. Intramembranous bone formation is based on the condensation of mesenchymal stem cells, which directly differentiate into bone-forming osteoblasts. In contrast, during endochondral ossification of the long bones, the mesenchymal stem cells first differentiate into chondrocytes that will further be replaced by osteoblasts. Long bones consist of the (1) epiphyses, which are protrusions at the ends of the long bones; (2) the diaphysis constituting its shaft; and (3) the metaphyses, which are located between the epiphysis and the diaphysis (Figure 4-1). The metaphysis is separated from the epiphysis by the growth plate, a proliferative cartilage layer, which is essential for the longitudinal growth of bones. After finishing growth, this cartilage layer is entirely remodeled into bone. The external shape of bones is formed by a dense cortical shell (cortical or compact bone), which is particularly strong along the diaphysis, where the bone marrow is located. The cortical bone shell becomes progressively thinner toward the metaphyses and epiphyses, where most of the trabecular bone is located. Trabecular bone (also called cancellous bone) is a sponge-like network consisting of myriads of highly interconnected bony trabeculae. The outer and the inner surfaces of cortical bone are covered by layers of osteogenic cells, termed the periosteum and the endosteum, which are involved in the growth of width by bone apposition at the periosteal and bone resorption at the endosteal sites. 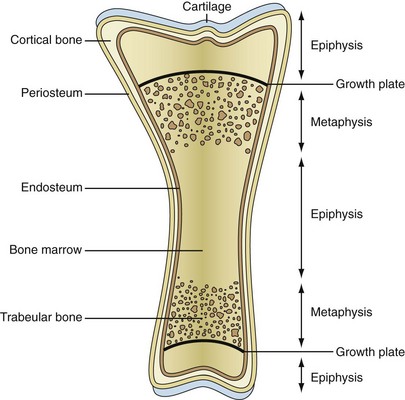 Figure 4-1 Long bones consist of the epiphyses separated by growth plates from the metaphyses, which contain most of the trabecular bone. The outer lining of bone is the dense cortical bone, which is covered by the periosteum (outer surface) and the endosteum (inner surface). The latter connects bone to the bone marrow. The bony end plates are covered by the articular cartilage, consisting of a mineralized deep zone and a nonmineralized surface zone.

The key protein component of bone is collagen type I. Collagen fibers follow specific directions forming the basis for the lamellar structure of bone. This lamellar structure, which can be visualized when examining bone in the polarized light, allows dense packaging, resulting in optimal resistance to mechanical load. The lamellar collagen structures can be assembled in parallel (e.g., along the cortical bone surfaces and inside the bony trabeculae) or concentrically around blood vessels embedded in the Haversian channels of the cortical bone. In case of rapid deposition of new bone such as during fracture healing, this lamellar structure is missing and the bone is then called woven bone. Woven bone is consecutively remodeled into lamellar bone, which is also considered “mature” bone. The composition of the collagen backbone also assists the deposition of spindle- or plate-shaped hydroxyapatite crystals, which contain calcium phosphate, allowing the calcification of the bone matrix.

In addition to collagen type I, other so-called noncollagenous proteins also exist in bone. Some of them such as osteocalcin, osteopontin, and fetuin are mineralization inhibitors, which serve to balance the degree of mineralization of the skeletal tissue. Aside from their intrinsic function in bone, noncollagenous proteins also exert important metabolic functions such as the control of energy metabolism by osteocalcin.

Osteoblasts are the bone-forming cells that derive from the mesenchymal stem cells of the bone marrow, which also form chondrocytes, myocytes, and adipocytes. Osteoblasts are cuboid-shaped cells that form clusters covering the bone surface. They are metabolically highly active, synthesizing the collagenous and noncollagenous bone matrix proteins, which are excreted and then deposited between the osteoblasts and the bone surface. This newly built matrix, which is not yet calcified, is termed the osteoid. The lag phase between osteoid deposition and its mineralization is approximately 10 days. Osteoblast differentiation depends on the expression of two key transcription factors, Runx2 and its target Osterix 1, which confer the differentiation of these cells into osteoblasts in response to external stimuli.1 Prostaglandin E2 (PGE2), insulin-like growth factor (IGF)-1, parathyroid hormone (PTH), bone morphogenic proteins (BMPs), and Wingless and Int-1 (Wnt) proteins are key stimuli for osteoblast differentiation.2,3 Prostaglandin E2, for instance, is an important anabolic factor for bone and induces the expression of bone sialoprotein and alkaline phosphatase in mesenchymal cells. Bone morphogenic proteins (BMPs) and transforming growth factor (TGF)-β, which shares structural similarities with BMPs, foster osteoblast differentiation by activating intracellular Smad proteins. Finally, Wnt proteins, a family of highly conserved signaling molecules, are potent stimulators of osteoblast differentiation. Wnt proteins bind to surface receptors on mesenchymal cells such as Frizzled and LRP5, eliciting activation and nuclear translocation of the transcription factor β-catenin, which induces the transcription of genes involved in osteoblast differentiation. Wnts thereby act not only in close synergy with BMPs but also cross-talk to the receptor activator of nuclear factor κB ligand (RANKL)-osteoprotegerin (OPG) system, which is involved in the differentiation and function of bone-resorbing osteoclasts.

Osteocytes are by far the most abundant cell type within bone. One cubic millimeter of bone contains up to 25,000 osteocytes, which are well connected with each other and the bone surface by small tubes (canaliculi) constituting a large and dense communication network inside the bone, which has similarities to the nervous system. The surface of this network of lacunae containing the osteocytes and the canaliculi containing the interconnecting filaments of the osteocytes covers an area of 1000 to 4000 square meters. Osteocytes are derived from osteoblasts, which are subsequently entrapped in the bone matrix. Osteocytes however, also start to express genes that are specific for these cells and not found in other cells such as osteoblasts. One of the most interesting products of the osteocyte is sclerostin, a secreted molecule that binds LRPs and blocks Wnt-stimulated bone formation.4,5 Consistent with its function as an inhibitor of bone formation, overexpression of sclerostin leads to low bone mass, whereas deletion of sclerostin leads to increased bone density and strength. Loss-of-function mutations in the human SOST gene encoding sclerostin entail increased bone mass, a disease termed sclerosteosis. Several local and systemic factors have been suggested as possible regulators of sclerostin expression by osteocytes. For instance, intermittent administrations of parathyroid hormone (PTH), which are associated with strong anabolic effects on the bone, potently inhibit sclerostin expression.

Osteoclasts are multinucleated cells containing up to 20 nuclei and are unique in their ability to resorb bone.6,7 They are directly attached to the bone surface and build resorption lacunae (Howship’s lacunae). Apart from their multiple nuclei, another characteristic of the osteoclast is the ruffled border, a highly folded plasma membrane facing the bone matrix and designed to secrete and resorb proteins and ions into the space between the osteoclast and bone surface (Figure 4-2). The space between this ruffled border and the bone surface is the place where bone resorption occurs. It is sealed by a ring of contractible proteins and tight junctions because it represents one of the few regions of the human body, where a highly acidic milieu is found. Bone degradation by osteoclasts comprises two major steps: first, demineralization of inorganic bone components, and second, removal of organic bone matrix. To demineralize bone, osteoclasts secrete hydrochloric acid through proton pumps into the resorption lacunae. This proton pump requires energy, which is provided by an ATPase allowing the enrichment of protons in the resorption compartment, which, in fact, represents an extracellular lysosome. In addition to protons and chloride, osteoclasts release matrix-degrading enzymes including tartrate resistant acid phosphatase (TRAP), lysosomal cathepsin K, and other cathepsins. Cathepsin K can effectively degrade collagens and other bone matrix proteins. Consequently, inhibitors of cathepsin K block osteoclast function and slow down bone resorption. 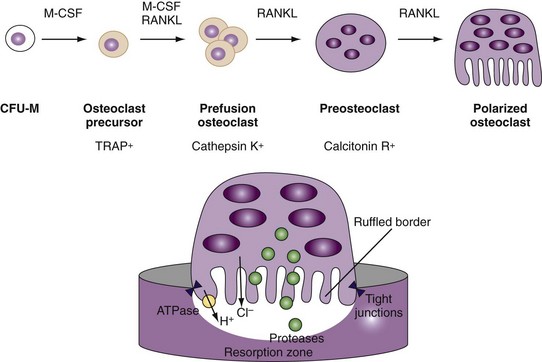