12: Principles of Biomechanical Radiographic Analysis of the Foot

Principles of Biomechanical Radiographic Analysis of the Foot

The purposes of using radiographs to analyze foot biomechanics include determination of foot stability (and evaluate the foot as a base for locomotion), to correlate with the physical exam, and to plan surgery.1,2 This chapter describes a system based on the concepts of stability that can be used to analyze the biomechanics of the foot.

The majority of foot radiographs used to assess foot mechanics are weight bearing so as to more closely approximate osseous relationships in stance and gait.3 Approximating dynamics and standardization are also why foot radiographs are taken in the angle and base of gait.3–5 The forces are not the same, however, because midstance is dynamic and radiographs represent a static situation. Nevertheless, radiographs can indicate how the weight-bearing foot reacts in a closed kinetic chain environment and how it interacts with ground reactive forces.

Positioning of the patient is very important, because the osseous relationships revealed by the radiograph can be altered dramatically if the patient is not in a relaxed angle and base of gait.10–14 Standardized positioning is essential for reproduction and accuracy of the radiograph that represents the foot’s interaction with ground reactive forces.

The foot bones have a genetically predetermined shape and alignment, which is secondarily modified by stress that originates intrinsically and extrinsically to the foot.15 This phenomenon is generally referred to as Wolff’s law, and the clinician can assess such stresses by observing the trabeculae and bone shapes.16,17 Trabeculae are parallel to the direction of stress. Bone shape evolves as the result of compression and tension experienced by the bone when standing and walking. Thus, if compression is not even across a joint, the margins of the joint change shape, reflecting the abnormal application of force on the joint. What may begin as minor asymmetry of force applied to a joint may eventually result in the joint developing a shape that perpetuates the reduced efficiency of the joint. The shape of the foot bones is crucial, for the foot is like a bridge that must carry the superimposed body.18,19

To meet the requirements of gait, the footbridge bones must be well aligned to provide stability, yet mobile enough to help absorb shock and adapt to terrain while walking. The foot must also not become so flexible that it is unstable during midstance and propulsion, to allow timely first metatarsophalangeal joint dorsiflexion.20–22 The ideal foot is not the most stable or the most unstable, but rather a balance between the two conditions.

When clinicians review foot radiographs and examine the foot for the purpose of analyzing it as an instrument for locomotion, they are looking for evidence of stability. When describing foot radiographs, evaluators compare the alignment of two segments by describing the distal segment relative to the proximal segment. It should be kept in mind that the distal part cannot be stable unless the proximal segment is stable.21,23

According to Webster’s New World Dictionary of the American Language, position means “the place where a thing is … in relationship to others.”24 Position of a joint describes where, in the range of motion of that joint, the respective bones are placed or situated. Therefore, to give the position of a joint, a reference must be provided. Such reference may be degrees or angulation relative to a proximal segment (e.g., the calcaneus is 5° inverted relative to the leg) or relative to a neutral position (the ankle is 10° dorsiflexed). Position does not imply motion or direction of motion. For example, an ankle may be 10° dorsiflexed, but this does not indicate whether it is dorsiflexing, plantarflexing, or stationary, for these are terms of motion.

If the clinician does not have a reference to compare the relative position of two bones, then the position of that joint or series of joints cannot be determined. For example, one must first determine the subtalar joint neutral position before you can determine if the position of the subtalar joint is pronated, neutral, or supinated. The terms plantarflexed/dorsiflexed, abducted/adducted, and inverted/everted can be used when describing radiographs of the foot, because these terms compare one foot segment to another.

Though the subtalar joint neutral position may not be determined radiographically, the attitudes of the pronated and supinated foot may be used to describe foot morphology.

Similarly, the foot must, for many years, be able to adapt to uneven terrain, be a rigid lever for propulsion, and yet return to its original position at the beginning of each step.2 A foot that is too stable cannot adapt to uneven terrain because it is too “resistant to change.” A foot that is not stable cannot act as a rigid lever or return to its original position once displaced. The degree of stability is of importance to proper foot mechanics and is a quality that can be inferred in radiographs based on the alignment of weight-bearing bones.

In general, most objects are more stable when they are well aligned because they bear loads better (Figure 12-1). The linear relationship of a well-aligned, load-bearing object allows even distribution of the imposed stress of the load and reduces the tendency for bending. In the foot, the relative stability of joints is evaluated. When a joint is loaded, it has more inherent stability when arranged in a straight line.

The foot does not have perfect linear relationships because such alignment would provide too much stability. As mentioned earlier, a foot that is too stable cannot serve the dynamic functions required for normal locomotion. In contrast, a foot with bones too greatly angulated is unstable and collapses under the load. 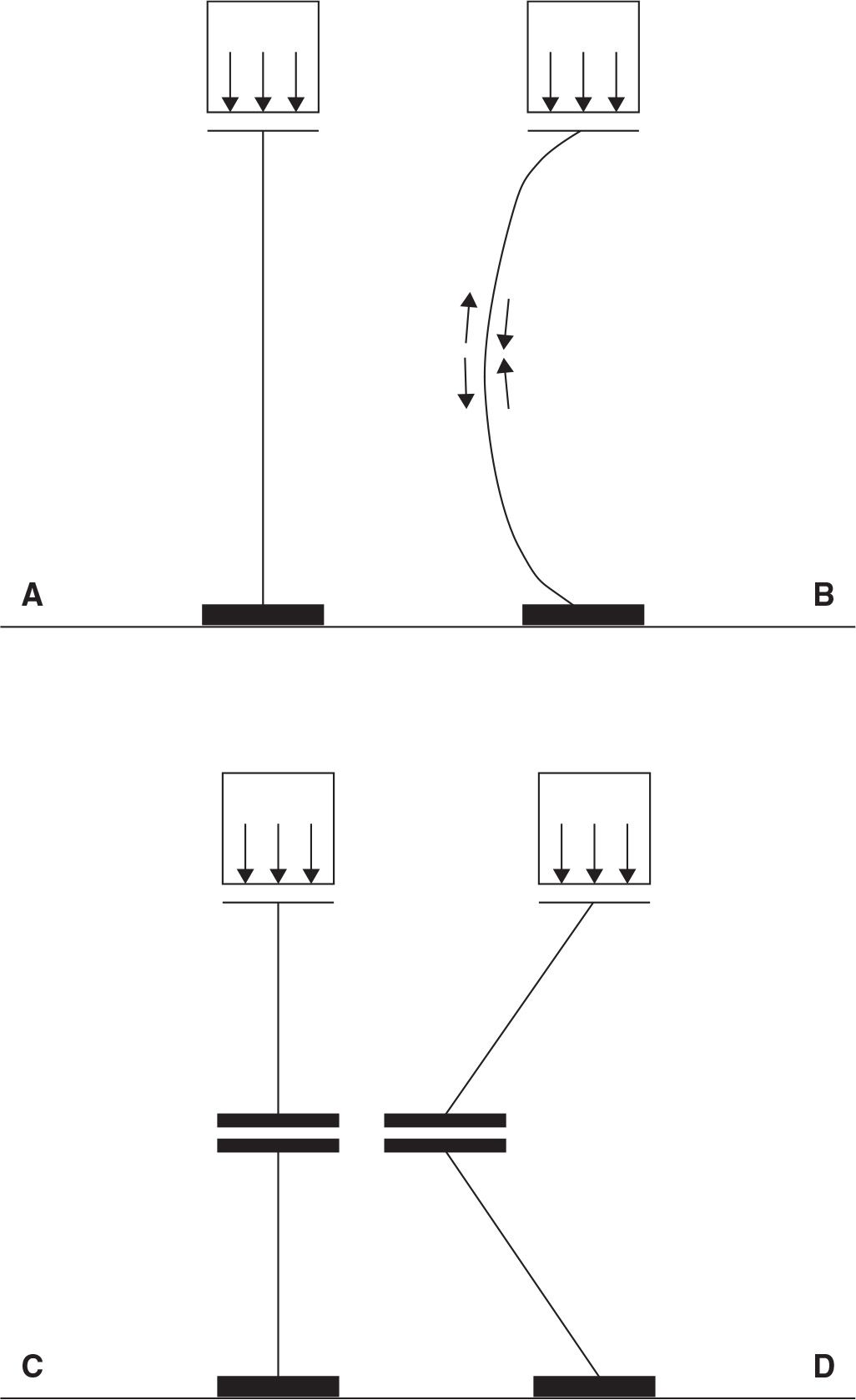 FIGURE 12-1. In general, a straight load-bearing column (A) is more stable than one that is curved (B) or angled (D). A curved or angled load-bearing column structure when compressed develops a compression side and a tension side. Even if the nonlinear load-bearing column is stable, the uneven load borne through the nonlinear structure is more likely to result in fatigue of the column and eventually may lead to collapse. If the linear column has a joint that is properly aligned with the loading force (C) (perpendicular with the loading force vector, which passes through the joint), the column continues to support the load because no rotational force (moment) is exerted at the joint.

Therefore, the most stable foot would be one that has only straight joints, with no angulation of its various osseous segments. It presents with even joint spaces, and perpendicularity of all forces applied to the joint axes and surfaces. Because each osseous segment is well aligned relative to its neighbor, the entire foot would be stable.

A force vector that creates rotation at a joint is called a moment and the resulting rotation is the opposite of stability. The unstable foot is one that has an obvious angulation between the osseous segments, uneven joint spaces, and uneven compression of the joints. It has a net force vector that is not perpendicular to the joint axes, so that a moment is created. Joint angulation (lack of alignment) and nonperpendicularity of the net force to the joint surface and axis result in rotation, which is the opposite of stability. 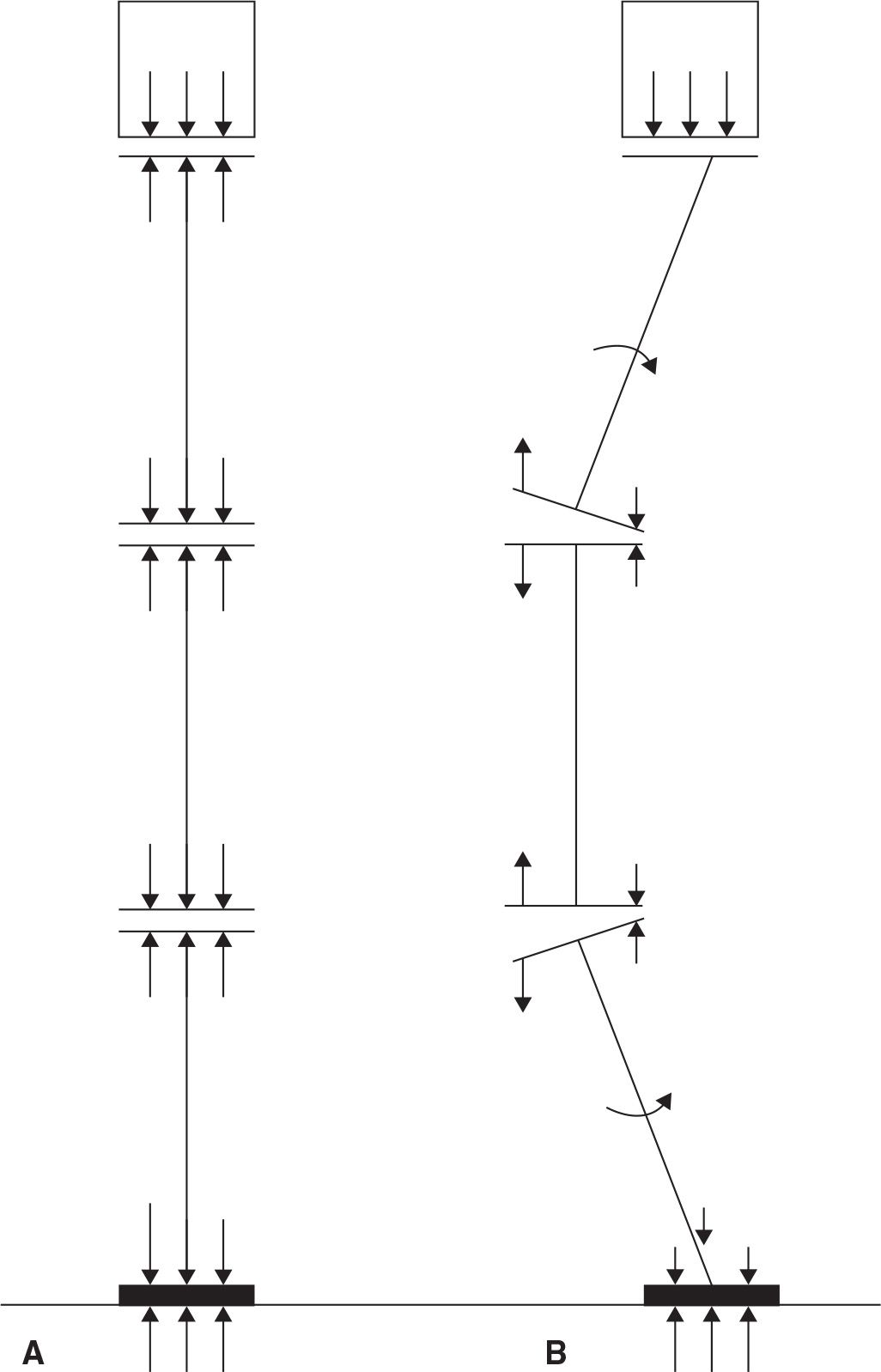 When the foot pushes down on the ground, the ground pushes upward; this is ground reactive force.25,26 The majority of ground reactive forces are not directed toward the more vertically oriented foot joint surfaces or axes27 (Figure 12-3). The foot develops stability, even though the net force vector acting on the foot is not directed perpendicular to most of the joint surfaces. The foot tension bands (trusses) are the key elements in changing how the largest vertical component of ground reactive force is directed through the foot.19,28–36 The plantar fascia and ligament truss systems convert and compress the vertically directed forces into a series of straight, self-locking wedges that prevent rotation to occur.28,29,34–39 This rotation is forefoot dorsiflexion on the rearfoot.