A 4-month-old girl presented with congenital deficiency of the right upper extremity (Fig. 74–1). She was born 2 weeks early by cesarean section secondary to low amniotic fluid. The child presented with no other medical or developmental problems. There was no family history of congenital anomalies, including her two sisters.

The patient was a healthy young infant with partial amputation of the right upper extremity. The shoulder and elbow had full active and passive range of motion. The proximal third of the forearm was present with the remaining extremity absent. The residual stump was well padded and there were several small nubbins at the end. The other extremities were normal and no amniotic bands were appreciated. 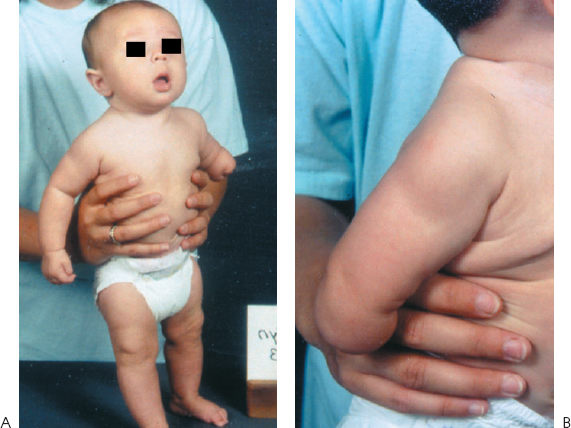 Figure 74–1  (A) A 4-month-old child with congenital anomaly of the right upper extremity. (B) Normal-appearing shoulder, elbow, and proximal forearm and absence of remaining extremity.

Radiographs of the right upper extremity demonstrated a proximal forearm with a shortened and dysplastic radius and ulna (Fig. 74–2). There was no evidence of osseous development of the remaining forearm, wrist, or hand structures.

Intrauterine necrosis of the right forearm

Amniotic band or constriction band syndrome is a result of entrapment of developing embryonal tissue by the fetal lining. This can manifest as amputation of a part and most commonly affects the digits (hands or toes). The diagnosis of constriction band requires the presence of a constriction band either in the involved extremity or elsewhere. Radial clubhand is a longitudinal deficiency of the preaxial border of the upper extremity. The radius can be partially or completely absent and the wrist is positioned in radial deviation. The ulna is present, although shortened compared with normal. Radial clubhand is often associated with visceral abnormalities (e.g., cardiac or genitourinary). Intrauterine necrosis of the forearm is a rare abnormality characterized by varying degrees of necrosis of the upper extremity evident at birth. The clinical manifestations range from minor areas of skin and muscle damage to mummification of the entire forearm. The etiology is either direct pressure on the affected limb or thromboembolic disease. 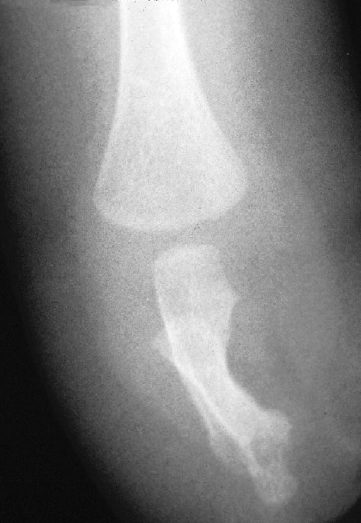 Figure 74–2  Radiograph of right arm with absence of the distal two-thirds forearm, wrist, and digits.

Congenital transverse deficiency is a failure of formation and defined according to the last remaining bone segment. A short below the elbow type amputation is the most common transverse deficiency of the upper extremity. The stump is usually well cushioned, and rudimentary nubbins or dimpling can be found on the end. These anomalies are usually unilateral, sporadic in occurrence, and rarely associated with other anomalies.

Initially, the most important intervention is to provide the family with accurate information and resources to help parents emotionally cope with their child’s disability. Most often the initial prosthetic intervention is to fit the child with either a passive hand or spring-loaded terminal device prosthesis at the age when independent sitting is achieved, usually around 7 to 9 months of age (Fig. 74–3). There are some facilities that begin fitting early, at 3 to 4 months of age. Studies have shown that early fitting (before 2 years of age) increases the acceptance rate of upper limb prosthetics. It is equally important to involve the family as much as possible in the decision-making process when considering prosthetics. Family acceptance and support of the device are probably the other crucial variables that positively influence prosthetic acceptance. At ∼15 months to 2 years of age, the child is usually transitioned to some type of body-powered prosthesis. This is the time developmentally that the child can begin to follow directions and can utilize cause-and-effect reasoning necessary for prosthetic training. For the short, below-the-elbow transverse deficiency, a supracondylar socket, figure-of-9 harness, and either a voluntary closing or voluntary opening terminal device is the prosthesis of choice (Fig. 74–4) (Table 74–1). There are some proponents of going directly to a myoelectric single site (cookie crusher) system at this time. This single-site system allows control over opening by contraction of the control muscle, and closing is achieved automatically upon relaxation of the muscle. However, our philosophy is to wait until the child is 3 to 4 years of age before introducing myoelectrics. The benefit of waiting is that it allows the child and family to gain experience with a conventional prosthesis, which may be the preferred prosthesis for certain activities in adolescence and adulthood. In addition, a conventional prosthesis provides more proprioceptive feedback and is less likely to accidentally pinch the user or other children. At this time, it is also recommended that the child begin receiving formal prosthetic training on an outpatient basis, regardless of the type of prosthesis prescribed. 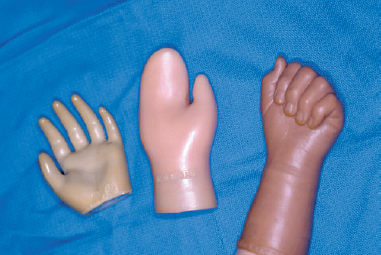