An otherwise healthy 19-month-old girl presented because her parents noticed that she was unable to eat with her left hand, and had difficulties with her right. Her mother’s pregnancy was remarkable only for a cesarean section delivery 6 weeks preterm. She was noticed at birth to have bilateral inguinal hernias, both of which had since been repaired. Although she has been low in her percentiles for both height and weight, her development has been normal. Her mother is not sure which hand is her dominant one, but she seems to rely more on her left. 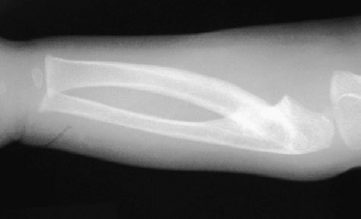 Figure 81–1  Initial radiographs. Anteroposterior (AP) film of the left forearm (the operative side).

The presence of an osseous synostosis confirms the diagnosis. Other etiologies for the clinical finding of a stiff pronated forearm in children include:

Radioulnar synostosis can present as a congenital deformity, as the result of forearm trauma including surgical trauma, and as a sequela to global trauma such as head injuries and burns. As a congenital deformity, radioulnar synostosis is thought to represent a failure of longitudinal segmentation. For a portion of the elbow’s in utero development, the proximal ulna and radius share a common perichondrium. Normal segmentation results in the development of separate ulnohumeral, radiocapitellar, and proximal radioulnar joints. Failure of this process is thought to result in the persistence of bridging tissue, which can remain fibrous or ossify. The extent of the synostosis also depends on the extent to which the process of segmentation fails. In some cases, the radial head is involved, in others it is a separate structure with the synostosis occurring just distal. In these latter cases, many authors have noted associated anomalies of the radial head and the radiocapitellar joint including radial head dislocation. The forearm is typically pronated, as this is the usual position of the upper extremity at the point of longitudinal segmentation of the radius and ulna in utero. Our patient presented with bilateral synostoses that were different: one osseous, one fibrous, one with radial head/radiocapitellar joint anomaly, and both pronated.

Although most cases are isolated, up to one third of patients present with other congenital abnormalities. These include Apert’s syndrome, Carpenter’s syndrome, Williams syndrome, arthrogryposis, mandibulofacial dysostosis, sex chromosome abnormalities, and other upper extremity abnormalities including polydactyly, syndactyly, Madelung’s deformity, carpal coalition, and thumb hypoplasia. Congenital radioulnar synostosis has also been observed to occur in patients with developmental dysplasia of the hip and clubfeet, and has been described as a feature of fetal alcohol syndrome. Up to 60% of cases are bilateral.

As with our case, most patients do not present until later in infancy. In one study the average age of diagnosis was ∼6 years. This is due, in part, to the ability of the children to adapt to their fixed forearm position through a mobile shoulder joint, as well as a hypermobile wrist. To supinate a forearm that is being held in pronation, the shoulder joint must adduct and externally rotate. The greater the degree of forearm pronation, the more difficult it becomes to supinate the wrist. Many patients with mild degrees of pronation can easily adapt. With increasing degrees of pronation, however, children find it increasingly difficult, if not impossible, to simply perform many activities of daily living that require forearm supination. These activities include eating, reaching about the face and head, dressing, and play/recreational activities. These tasks become increasingly difficult if both forearms are involved.

At presentation, careful examination reveals that the forearm is held in a degree of pronation. This is not always easy to detect upon casual inspection. Therefore, it is important for the examiner to stabilize the elbow and the wrist when checking for the integrity of forearm rotation. It is important to distinguish between rotation that occurs through the forearm axis and that which occurs through the wrist, because wrist hypermobility is a common finding in congenital radioulnar synostosis. One common finding that was present in our case was a small elbow flexion contracture. Plain films will support the diagnosis once the bridge becomes ossified; however, one must be mindful of the possibility of a fibrous bridge. It is important to note the status of the radiocapitellar joint. One author recommends radial head excision if dislocated and problematic once a child reaches skeletal maturity.

Once surgery is indicated, our approach is based on the idea that children will have nearly normal upper extremity function as long as the forearms are in a more functional position of rotation. Supple shoulders and hypermobile wrists allow these children to adapt. As such, we do not perform procedures designed to restore rotation to the forearm. We also recommend surgery at an early age because some feel that the risk of neurovascular complication increases after 10 years of age. Our procedure is a modification of that originally described by Green. Simmons et al described a significant incidence of neurovascular complications with rotational osteotomies. Their recommendation was to limit the degree of correction at a single surgery, or shorten the forearm, to prevent such complications. The senior author has found that prophylactic forearm fasciotomies have thus far eliminated the occurrence of compartment syndrome in our patients. This approach is both reliable and technically straightforward while minimizing potential complications and untoward outcomes.

The procedure is performed with the patient in the supine position and under general anesthesia on a radiolucent hand table. The entire arm is prepped and draped after placement of a nonsterile tourniquet. Appropriate preoperative intravenous antibiotics are administered for infectious prophylaxis, and the procedure is started once the arm is exsanguinated and the tourniquet elevated.

The first step is to place a smooth intramedullary pin down the shaft of the ulna starting at the olecranon. We have found that the ulnar endosteal canal is quite narrow; therefore, this serves as the rate-limiting step for the entire procedure. The starting point on the olecranon apophysis is first determined using fluoroscopy with the pin at the approximate entry level into the skin. Once the starting point is determined, the pin is introduced into the olecranon process via a small stab wound. Under fluoroscopic guidance, the pin is drilled through the apophysis and proximal cortex of the olecranon process, but not advanced into the ulnar canal. Once orthogonal fluoroscopic views confirm that the pin will traverse within the ulnar intramedullary canal, the pin is advanced gently using a mallet. No drilling is done because if the pin trajectory is incorrect, the ulnar cortex is easily penetrated prior to recognition. Furthermore, once a false pin tract has been created, a new starting point is often necessary because attempted redirection is difficult. The pin is advanced down the intramedullary canal of the ulna until it reaches the distal third of the ulnar shaft.

The next step is to expose the synostosis site (Fig. 81–2A). A 5- to 6-cm longitudinal incision is created along the proximal subcutaneous ulnar border. Fluoroscopic assistance can guide the exact positioning of the wound so it is centered over the synostotic mass. The incision is carefully taken down to the level of bone, and the periosteum is sharply incised for the length of the skin incision. No neurovascular tissue of significance is encountered in this exposure other than crossing veins, which can be ligated or coagulated. The dissection then proceeds subperiosteally radially, ulnarly, and volarly for the entire extent of the synostotic mass. We have often found that there is a bony crevice at the level of the synostosis. Awareness of this crevice prevents accidental penetration into the soft tissues surrounding the proximal forearm. Fluoroscopic assistance prevents accidental penetration of the elbow joint. Once this dissection is complete, Hohmann-type retractors can be used to aid in exposure. The surgeon must be mindful of the important volar neurovascular structures as well as the posterior interosseous nerve. 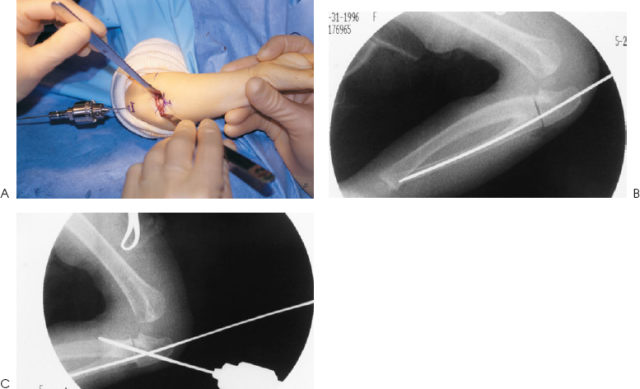