A 5-month-old boy presented with congenital anomalies of both upper extremities (Fig. 77–1). He is the product of a full-term pregnancy, born by cesarean section delivery. There were no complications during pregnancy or delivery. The child is otherwise healthy and has attained his early developmental milestones at the appropriate time. There is no family history of congenital anomalies, including two siblings without abnormalities.

The patient is a healthy-appearing infant with congenital anomalies of both upper extremities. His right extremity is longer than his left. Both shoulders had full range of motion and strength. Both elbows and forearms had no active or passive motion. The right elbow was fixed at 45 degrees of flexion and the forearm rigid in neutral rotation. The left elbow appeared to be hyperextended with the forearm facing backward and the hand resting on the flank. The left forearm was fixed in 30 degrees of pronation and appeared foreshortened compared with the right. 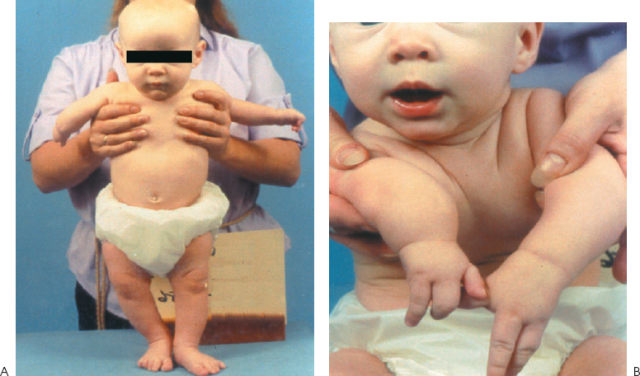 Figure 77–1  (A) A 5-month-old child with congenital anomalies of both upper extremities. The right elbow is fused in slight flexion and the left elbow is fused facing backward. (B) Hand anomalies with bilateral three-digit hands.

Radiographs of the upper extremities at age 2½ years indicated anomalies of both sides (Fig. 77–2). The right elbow was fused between the humerus and the radius. The ulna appeared slightly hypoplastic. There was absence of the ring and small rays with normal-appearing thumb, index, and long digits. The left elbow was also fused with the forearm pointing backward. There was absence of the ulna with a small proximal segment remaining. The right wrist demonstrated early ossification of the carpus, whereas the left carpus showed delayed ossification. A three-digit hand was present bilaterally. 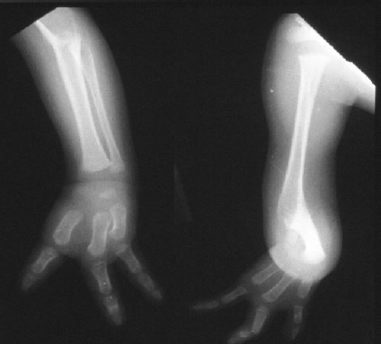 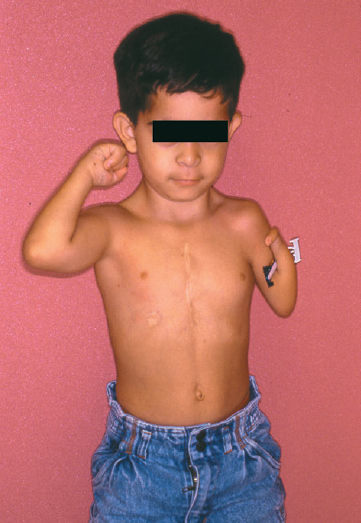 Figure 77–3  Clinical photograph of a 7-year-old boy with type III ulnar clubhand with absence of the ulna, pterygium cubitale, and severe hand anomalies.

Radial deficiency is more common and associated with visceral abnormalities (e.g., cardiac or genitourinary), whereas ulnar deficiency is linked with musculoskeletal anomalies that may involve the contralateral limb, spine, or lower extremities (e.g., proximal focal femoral deficiencies, congenital amputations, or scoliosis). In radial deficiency, the radius is often absent and the wrist unstable in severe radial deviation, whereas in ulnar deficiency the ulna is frequently partially absent and the wrist stable in slight ulnar deviation. Arthrogryposis multiplex congenita is a syndrome of multiple joint contractures that are present at birth and may be diffuse in presentation or isolated to the upper or lower extremity. The skin is often waxy and devoid of skin creases, and considerable muscle wasting is evident. The typical upper extremity posture is shoulder adduction and internal rotation, elbow extension, forearm pronation, wrist flexion, and ulnar deviation. Radioulnar synostosis is a transverse fusion of the proximal radius and ulna that prevents forearm rotation, not flexion/extension. The condition may be bilateral, but is not associated with hand deformities. Pterygium cubitale is a syndrome of congenital webbing of the neck, axilla, knees, and digits. In type III ulnar deficiency there may be pterygium cubitale, but it is an isolated finding (Fig. 77–3).

Ulnar deficiency is a failure of formation or longitudinal deficiency of the postaxial border of the upper extremity. Most cases are sporadic, nonhereditary, and without a definable cause. Ulnar deficiency is an uncommon anomaly, and the ratio between radial and ulnar deficiency ranges from 4:1 to 10:1. There is a spectrum of ulnar deficiency with varying degrees of ulna absence, elbow instability, and ulnar deviation of the hand. The classification system is based on the amount of ulna remaining and the degree of deformity (Table 77–1). The typical deformity is a shortened forearm with a bowed radius and ulnar deviation of the hand, with digital anomalies. The elbow usually has restricted motion, and its stability is related to the presence and size of the proximal ulna. The deficient length of the ulna increases the load borne by the radius, and the radial head may subluxate or dislocate. In addition, in a type IV ulnar clubhand the radial head is fused to the humerus. The wrist and hand deformities most commonly involve the ulnar carpus (pisiform, hamate, triquetrum) and ulnar rays. However, radial-sided deficiencies (e.g., thumb hypoplasia) can also occur in ulnar deficiency.


Type II is most common type of ulnar clubhand.

The hypoplastic or absent ulna may be replaced by an unossified anlage that connects the remaining proximal ulna or humerus to the ulnar carpus and/or distal radius. This structure has no growth potential and may act as a tether to cause progressive bowing of the radius and ulnar deviation during growth. The ulnar anlage is most commonly present in type II and IV ulnar deficiency, but its incidence and constancy as deforming forces are controversial.

The initial treatment of ulnar deficiency is nonoperative with stretching and splinting. The parents are instructed on passive stretching of the wrist at each diaper change. A splint is fabricated to improve the alignment of the limb and prevent further ulnar deviation of the wrist. This splint is worn at nighttime so as not to inhibit daily use of the arm or interfere with the development of extremity function.

Children with congenital anomalies can adapt remarkably well to their deformities. They develop compensatory maneuvers to accomplish both simple and intricate functional tasks. The treating physician should be cautious when considering surgical intervention for anomalies like ulnar deficiency. Ample time should be spent with the child and family discussing what activities can and cannot be performed. The child should be observed performing activities, and the compensatory motion that has developed over time should be noted. The proposed surgery should not interfere with these established patterns of function in favor of cosmesis. In addition, adaptive equipment can be used to accomplish a variety of tasks and should be considered prior to surgery. When contemplating surgery, realistic goals should be discussed with the family and defined prior to the procedure.

The treatment of the forearm and wrist deformity is controversial. If progressive radial bowing and ulnar deviation occur in a type II or IV ulnar deficiency, then resection of the ulnar anlage at 6 months of age is indicated. However, prophylactic excision of the anlage is no longer recommended. Loss of the ulna causes increased load borne by the radius, which can yield radial bowing and/or radial head subluxation or dislocation. Radial head excision is indicated if the radial head becomes symptomatic, although we prefer to wait until skeletal maturity. If the elbow is stable, then simple excision is performed. However, with a short ulna and unstable elbow, a creation of a forearm may be the preferred treatment with placement of the radius on the remaining proximal ulna. However, this procedure eliminates any forearm rotation and may hamper function. 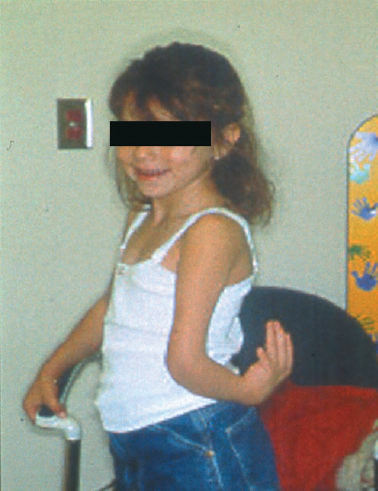