A 28-year-old laborer presents to the emergency room 3 hours after falling 10 feet from a ladder onto his outstretched arm. He complains of pain, crepitation, and limited motion of his elbow. He denies any numbness or paresthesia.

Range of motion is limited from 60 to 75 degrees. Pronation is 10 degrees and supination is 20 degrees. He has moderate swelling about the elbow, but no lacerations or significant abrasions. He is neurovascularly intact. 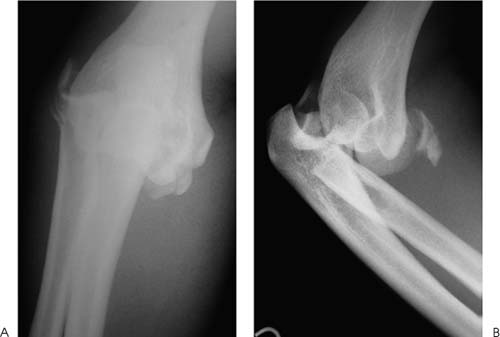 Figure 41–1. Anteroposterior (AP) (A) and lateral (B) radiographs of the elbow.

Anteroposterior (AP) and lateral radiographs of the elbow are obtained (Fig. 41–1).

• Aggressive treatment and early surgical intervention when necessary are keys to maximizing functional recovery of these severe injuries.

• Use of a continuous passive motion (CPM) device can be helpful in certain fracture-dislocations in an effort to maximize postinjury and/or postoperative elbow range of motion.

• These fracture-dislocations often concur in conjunction with significant ligamentous injuries about the elbow, and repair of these ligament tears performed at the time of fracture fixation often helps maximize postoperative stability and helps avoid late instability problems.

• Routine use of nonsteroidal antiinflammatory drugs as prophylactic treatment for ectopic bone formation is a valuable intervention and is strongly recommended for most elbow fracture-dislocations.

Posterior Fracture—Dislocation. Limited motion, moderate pain, and crepitation all lend support to the diagnosis of posterior elbow fracture-dislocation. Radiographs confirm the diagnosis. Initial treatment following diagnosis includes an attempt at closed reduction. Reduction was achieved but could not be maintained. Inadequate bony stability was present.

Elbow stability must be restored, necessitating open reduction and internal fixation of the associated fractures. Even with the existing comminution, an attempt at radial head fracture fixation should probably be carried out. Likewise, the coronoid fracture, because of its size, must be repaired. A medial incision is chosen to allow for access to the coronoid process and ulna. This approach will also allow for medial ulnar collateral ligament repair if necessary, after fracture fixation is achieved. The ulnar nerve is identified and protected throughout the procedure.

After stability of the coronoid process and ulna is achieved with internal fixation, range of motion demonstrates marked valgus instability. This is at least partly due to the radial head fracture. Therefore, attention is turned to the lateral elbow, where a standard approach to the radial head is accomplished. Comminution precludes the ability to achieve good stability of the radial head fracture, and excision is required. However, because of the marked valgus instability, a silicone radial head spacer is sized and placed. Even after placement of the spacer, significant valgus instability persists. The medial collateral ligament is therefore repaired (Fig. 41–2). Following medial collateral ligament repair, the posterolateral capsule and lateral collateral ligament are carefully repaired prior to closure of the lateral incision. The ulnar nerve is then transposed subcutaneously. Skin closure is performed in a routine fashion. 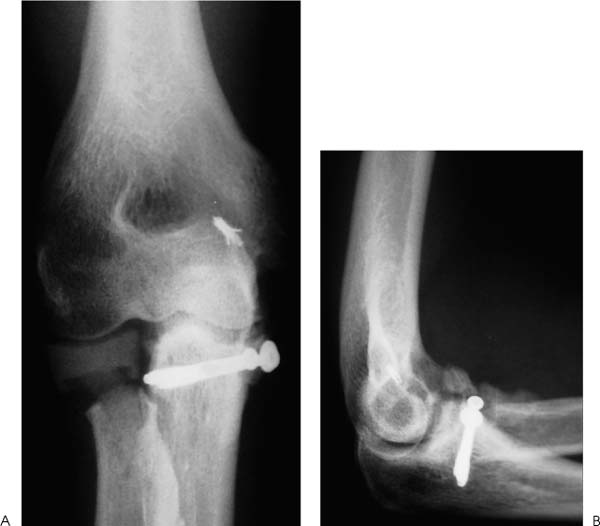 • Fracture-dislocations of the elbow are severe injuries, and treatment that does not allow for early motion is very likely to result in severe losses of motion.

• Inadequate or tenuous fixation of the associated fractures may jeopardize joint stability when early motion is instituted.