A left-hand dominant, 55-year-old man presents 2 days after an acute, painful pop in his anterior, distal arm following an attempt to pick up a heavy chair. He denies any previous history of elbow pain or arm deformity. Also, he denies any numbness or weakness in his hands.

Active range of motion of the elbow demonstrates a 25-degree extension lag and flexion of 115 degrees. Passive range of motion demonstrates full flexion and an extension lag of 10 degrees. He has moderate swelling about the distal arm anteriorly. Also, there is obvious asymmetry of his biceps muscle, with relative proximal migration of the muscle belly. There is no palpable distal biceps tendon. Stability of the elbow is normal.

The typical features of distal biceps tendon rupture have allowed it to be well characterized. In almost every reported case, a single traumatic event has been implicated as the cause of the rupture. Preexisting degenerative changes in the substance of the tendon near the radial tuberosity are presumed to be an underlying predisposing factor. Acute pain and distal arm biceps tendon asymmetry are noted immediately following the injury. Also, as in this patient, a palpable or even an audible pop is heard at the time of rupture. On examination, flexion weakness is almost always present. Some active supination strength is generally present, although this is more variable in the authors’ experience.

With the patient in a supine position, a transverse antecubital incision is made (Fig. 45–1). Following dissection of the subcutaneous tissues, digital palpation is used to identify and expose the distal biceps tendon. A traction suture is placed and the distal end of the tendon is debrided of frayed or fibrotic tissue and clot. While holding the forearm in full supination, right angle retractors are then used to expose the radial tuberosity. The radial tuberosity is easily palpable and its margins are well defined. If some residual tendinous tissue is retained on the radial tubersity, it is debrided. A very light abrasion using a high-speed burr is carried out on the radial tuberosity surface. However, care is taken not to penetrate the subchondral bone, as this will reduce the holding power of the subsequently placed suture anchors. Following debridement and light abrasion, two suture anchors are placed into the radial tuberosity under direct visualization. These suture anchors, loaded with no. 2 nonabsorbable suture, are then used to reapproximate the distal biceps tendon. The free ends of each suture are passed through the leading edge of the distal biceps tendon in a horizontal mattress fashion and tied down independently. Tying of the sutures is carried out while an assistant maintains the forearm in supination and approximately 80 degrees of elbow flexion. The sutures are not cut at this time, but are used to supplement the distal biceps tendon reapproximation by passing them in a Bunnell-type fashion. The sutures are then tied again after the Bunnell suture has been passed. Range of motion is assessed and stability of the repair confirmed. A tourniquet is not routinely used, as it tends to limit access to the distal arm and can sometimes act to limit distal migration of the biceps muscle during the repair. No suction drainage is generally used, and routine skin closure is carried out. A posterior elbow splint with the elbow at 90 degrees of flexion and slight supination is applied at the end of the case. These procedures are routinely performed on an outpatient basis. 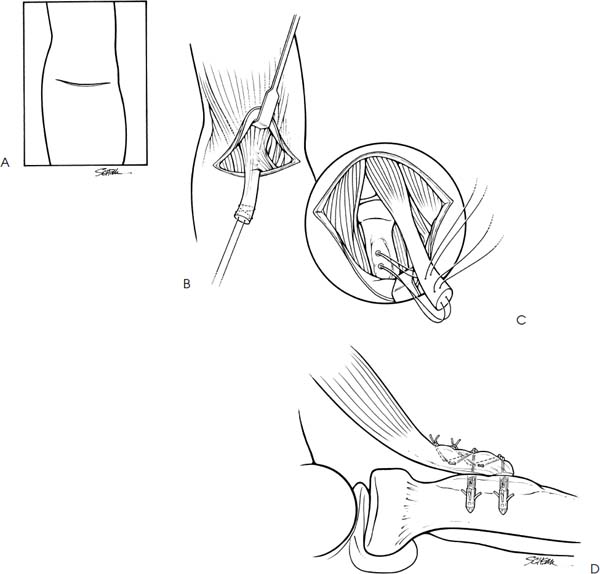 Figure 45–1. Technique for repair of distal biceps tendon. (A) A transverse incision is made in the antecubital flexion crease. (B) The acutely disrupted distal biceps tendon is palpated and pulled into the incision by use of a traction suture. (C) The radial tuberosity is then exposed and two suture anchors placed. (D) Sutures are then used to reapproximate the tendon.

• Although proximal extension of the antecubital fossa incision is sometimes required to identify and retract to the distal biceps tendon, a limited transverse antecubital incision is usually all that is necessary.