A 20-year-old college football player presents 3 days after an on-field injury in which he dislocated his shoulder trying to make a tackle. He was taken to the emergency room, where the shoulder was reduced. He has had seven previous episodes, all requiring reduction in the emergency room. His initial dislocation occurred during a football game when he was 17 years old. He denies any numbness and reports only mild pain in his shoulder.

The patient’s range of motion is normal in all planes except for a loss of internal rotation of four vertebral levels. He has normal strength and mild tenderness to palpation about the shoulder. Translation testing demonstrates 2+ increased anterior translation, normal posterior translation, and no sulcus sign. He has a positive apprehension sign and a positive relocation test. He is neurovascularly intact.

An anteroposterior (AP), axillary view, and scapular Y view of the shoulder failed to demonstrate any obvious abnormalities.

Recurrent Anterior Shoulder Instability. The history and physical examination on this patient confirm anterior shoulder instability. The absence of evidence to suggest multidirectional instability and his history of an initiating traumatic event with subsequent traumatic redislocations confirmed the diagnosis of traumatic, anterior shoulder instability. The patient had no evidence of generalized hyperlaxity. He was well conditioned and had no demonstrable shoulder girdle or shoulder joint weakness. The significantly increased anterior translation, in combination with the positive apprehension sign and relocation test, makes the diagnosis a relatively easy one to make.

The treatment options for this patient are limited. Nonoperative measures are extremely unlikely to prevent recurrent dislocations, particularly if he continues to play contact sports. Surgical stabilization of the shoulder is probably the only reasonable intervention. The timing of surgical intervention is important to college athletes, so as to minimize their time away from the sport and maximize their potential for continuation in the professional ranks. This patient presented midseason, greatly affecting surgical timing decisions. He did demonstrate normal strength and near-normal range of motion, allowing him to adequately protect his shoulder from reinjury. Certainly his chances of recurrent dislocation are high, but restricting play is unlikely to change the natural history of his instability. The authors prefer to treat the great majority of these in-season athletes symptomatically. Braces limiting abduction and external rotation are provided, as long as the brace does not significantly hinder their ability to perform. Surgery is then scheduled following completion of the season.

The authors prefer to perform arthroscopy on all patients undergoing stabilization procedures for anterior shoulder instability. Arthroscopic evaluation of the glenohumeral joint allows for accurate assessment of the intraarticular pathology as it pertains to the presence or absence of a Bankart lesion. Moreover, arthroscopy allows for a determination of the capsulolabral tissue quality. This information is important to the author (L.D.F.) who occasionally performs open anterior stabilization in contact athletes with recurrent, traumatic instability. Robust, thick capsule and ligamentous tissue, in combination with a prominent labrum and Bankart lesion, is stabilized using a slightly different open operative technique than is a shoulder with poorly defined ligamentous structures with a small Bankart lesion or a shoulder without a Bankart lesion. The arthroscope also allows the surgeon to rule out additional pathologies such as partial- or full-thickness rotator cuff tears, superior labrum anterior and posterior (SLAP) lesions and loose bodies. While rotator cuff tears, loose bodies, and SLAP lesions can be effectively treated at the time of shoulder arthrotomy performed for the open stabilization procedure, they are much more difficult to diagnose with arthrotomy alone. The arthroscope expands the diagnostic capabilities of the surgeon, potentially improving outcome.

Following a diagnostic arthroscopy, a decision regarding the surgical approach and repair technique is made. When a Bankart lesion is present, in combination with healthy ligamentous and capsular tissue, the subscapularis tendon and underlying capsule are routinely released medial to the lesser tuberosity. However, when poorly defined ligamentous and capsular tissue is present, either with or without a Bankart lesion, or when there is an element of multidirectional instability on clinical examination, the subscapularis is released medial to the lesser tuberosity leaving the capsule intact. This variation allows the author to effectively perform a capsular plication at the time of Bankart repair in patients with poorly defined tissues or evi dence of multidirectional instability. This can be performed whether a Bankart lesion is present or not.

The beach chair position is preferred by the author as it allows for easy conversion from arthroscopy to an open approach. There is no need to re-prep and drape the shoulder, and the patient’s head is simply lowered from approximately a 60-degree upright position to a 30-degree upright position. A sterile Mayo tray is used to support the elbow. A towel is placed under the elbow to protect the ulnar and radial nerves and to prevent persistent anterior subluxation of the humeral head during the operative procedure. An axillary incision is used exclusively, regardless of the procedure to be performed. Prior to the arthroscopic portion of the procedure, a pen is used to mark the superior extent of the axillary fold anteriorly. This marks the proximal limit of the incision. Often the incision need not be extended to this superior limit. However, as long as this superior limit is respected, the incision is not visible with the arm at the side, making for a very cosmetically appealing, postoperative scar.

After making the incision in the axilla, the subcutaneous tissues are dissected to allow for retraction of the skin proximally. The cephalic vein is identified in the deltopectoral interval and retracted laterally with the deltoid. A self-retaining retractor is then placed in the deltopectoral interval and the underlying clavipectoral fascia is released. The coracoid process and conjoined tendons are visualized but no release or osteotomy is carried out. Occasionally, the lateral border of the conjoined tendon extends quite laterally. If so, the most lateral portion can be released just inferior to its origin on the coracoid process. The author has found no need to repair this release at the time of closure. The subscapularis tendon and the rotator interval are identified. If a hole in the rotator interval exists, it is closed with interrupted no. 2 nonabsorbable suture at the end of the case. If, at the time of arthroscopic evaluation, a prominent labrum in combination with a Bankart lesion and healthy ligamentous tissue is identified, as is usually the case in the majority of these athletes, the subscapularis tendon and underlying capsule are released as a unit approximately 1 to 1.5 cm medial to the lesser tuberosity. Care should be taken to ensure that an adequate cuff of tendon and capsular tissue is left attached to the lesser tuberosity, so as to allow for a strong reapproximation at the time of closure. The release of the subscapularis and capsule begins at the superior border of the subscapularis. The release continues inferiorly, but the most inferior portion of the subscapularis is not generally not violated. The three sister vessels that run inferior to the subscapularis are not routinely ligated. In fact, by limiting the inferior extent of the subscapularis release, the anterior humeral circumflex veins and artery are rarely visualized. The subscapularis and underlying capsule are tagged with a traction suture and a Fukuda retractor is placed in the glenohumeral joint.

The anterior and inferior capsulolabral structures are then visualized. The author routinely performs glenoid neck abrasion and soft tissue debridement with the arthro-scope prior to the open portion of the procedure, but these procedures can be easily performed at the time of arthrotomy as well. Following mobilization of the capsulolabral tissue and aggressive abrasion of the glenoid neck anteriorly and inferiorly, three suture anchors loaded with no. 2 nonabsorbable suture are then placed at the 5:30, 3:30, and 1:30 clock positions (Fig. 11–1). Placement of these suture anchors is critical to reestablishing an anatomically correct labral buttress and proper ligamentous tension. The suture anchors are placed at the articular margin of the glenoid, and often through the most anterior portion of the articular cartilage. The sutures are then passed through the labrum inferior to the level of the anchor itself, using a horizontal mattress technique. Tying of the suture effectively shifts the capsulolabral structures superiorly along the articular margin of the glenoid, retensioning these tissues. Recreating a prominent labrum not only acts as a “door stop” to block anterior translation, but also reestablishes the suction cup effect the labrum provides. The subscapularis tendon and underlying capsule are then carefully reapproximated using no. 5 nonabsorbable suture in a figure-of-eight fashion. Subcutaneous and skin closure is accomplished in standard fashion. A drain is generally not required. This procedure is routinely performed by the author on an outpatient basis. 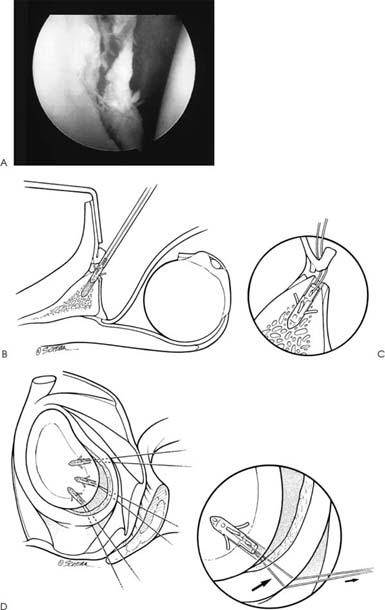 Figure 11–1. Open technique for repair of traumatic, recurrent anterior shoulder instability. (A) Arthroscopic photograph demonstrating a Bankart lesion in a college football player. (See Color Plate 11–1A.) (B) Transverse section demonstrating anchor placement at articular edge of glenoid rim. Retraction of the subscapularis and humeral head allows for excellent access to the anterior glenoid. (C) Sutures passed through the detached labrum is also shown. (D) An intraarticular illustration demonstrating the Bankart lesion, with sutures passed inferior to the anchor position on the glenoid. 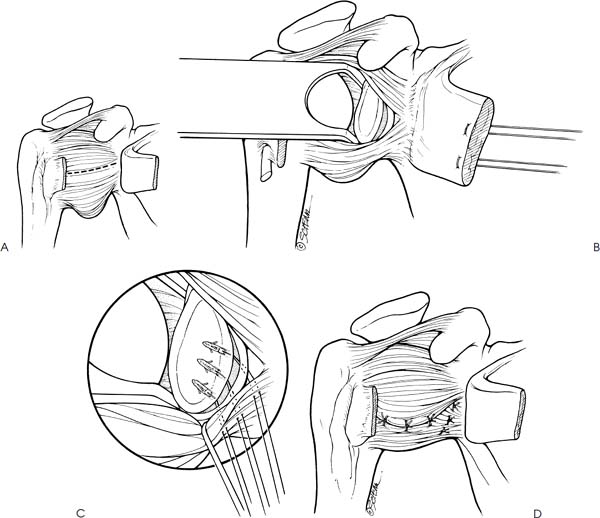 Figure 11–2. (A) Bankart repair carried out through a transverse capsular arthrotomy following overlying release of the subscapularis tendon. (B) A humeral head retractor allows for visualization of the Bankart lesion. (C) Sutures have been passed through the lesion but have not yet been tied. (D) Following Bankart repair a pants-over-vest capsular plication is carried out by advancing the inferior capsular limb deep to the superior limb.

A transverse incision through the midportion of the capsule is then made, extending from the glenoid margin to the insertion of the capsule on the humeral head. Re-tractors are then placed through this transverse incision and the capsulolabral structures are visualized directly. The Bankart lesion is repaired using three suture anchors placed in a similar fashion to that described when the subscapularis and capsule are released as a unit. However, these sutures are passed outside of the capsule and tied external to it. Following repair of the Bankart lesion, a pants-over-vest closure using no. 2 nonabsorbable suture allows for effective plication of the transverse capsular arthrotomy. The overlying subscapularis tendon is then reapproximated with no. 5 nonabsorbable suture in a figure-of-eight fashion. Skin closure carried out in routine fashion. This procedure is carried out on an outpatient basis as well.

• Arthroscopy serves as a valuable tool in the identification and characterization of glenohumeral joint pathology and tissue quality. It is routinely performed by the authors regardless of the technique employed to stabilize the shoulder.

• When the subscapularis tendon is released during open anterior stabilization, the inferior portion of the subscapularis is routinely left intact. This allows for easier reapproximation after labral repair and makes ligation of the anterior humeral circumflex arteries and veins unnecessary.