A 20-year-old woman who is a college softball player presents with a 2½ year history of dominant-sided shoulder pain and instability symptoms. She states that she has dislocated her shoulder three times, requiring reduction in the emergency room. In addition, she has had between 10 and 20 recurrent instability events for which she was able to achieve reduction on her own. Over the last 2 years, she has had a number of nonoperative treatment measures, including an extensive exercise program performed for anterior shoulder instability under her trainer’s care. The patient has been compliant with her exercises program; however, she has failed to significantly improve her instability pattern. She denies any numbness or weakness in her upper extremity or any other joint problems.

Range of motion of the shoulder is normal. Strength is also normal in all planes. She has no tenderness about the shoulder, and there is no atrophy, asymmetry, or winging of the scapula. She is neurovascularly intact in her upper extremity. Stability testing demonstrates 2+ increased anterior translation with normal posterior translation. The patient demonstrates a 2+ sulcus sign on the affected side, as compared to a 1+ sulcus sign on the unaffected side. She has a positive apprehension sign and a positive relocation test. She does not have a positive thumb-to-forearm test and does not have hyperextendable elbows or knees.

An anteroposterior (AP), axillary, and scapular Y view of the shoulder failed to reveal any obvious abnormalities.

A nonoperative treatment program consisting of shoulder girdle muscle strengthening and rotator cuff exercises eliminates the symptoms of instability in the majority of patients with multidirectional instability. An extensive exercise program should be carried out in all patients diagnosed with multidirectional instability, regardless of the activity level or aspirations of the patient. The exercises are specifically designed to strengthen the rotator cuff muscles and the deltoid. Rubber Therabands (Hygenics, Akron, OH) are used initially. Six different bands are available, and each band provides increasing resistance from 1 to 6 pounds. The bands are also color coordinated based on their resistance. The exercises should be performed under the direction of a therapist or athletic trainer and should be carried out two to three times per day. As bands with increasing resistance can be used, additional exercises are instituted. Also, sport-specific exercises incorporating plyometrics and advanced training can be instituted. Care is taken to avoid positions of risk early in the rehabilitation program. Such an exercise program is continued for a minimum of 3 months before surgery is considered.

When an organized therapy program has failed to improve the patient’s symptoms adequately, surgical intervention is considered. The specific techniques chosen to stabilize the shoulder depends on a number of factors. The degree of instability along with the aspirations and activities of the patient play a significant role in determining the authors’ choice of surgical technique.

The authors perform shoulder arthroscopy at the time of stabilization in all patients with multidirectional instability. Often, an arthroscopic technique is used to stabilize the patient’s shoulder. Even if an open procedure is carried out after diagnostic arthroscopy, the status of the rotator cuff, labrum, and the integrity and qual ity of the ligamentous tissue can all be accurately assessed during arthroscopy prior to a formal arthrotomy.

Arthroscopic surgery can be performed with the patient in either the lateral decubitus or beach chair position for the treatment of multidirectional instability. Visualization through both a standard posterior and anterior portal allows for a complete diagnostic arthroscopy. This information, combined with the information gained with an examination under anesthesia prior to arthroscopy, aids the authors in their decision-making process regarding the best technique to stabilize the shoulder.

Patients with lesser degrees of multidirectional instability, and the absence of any other pathology as determined at the time of arthroscopy, are often treated with a combination of purely arthroscopic techniques. Thermal capsulorrhaphy using either the radiofrequency probe device (Oratec) or the holmium laser (Coherent, Palo Alto, CA) is often performed in conjunction with an arthroscopically performed rotator interval capsular plication. This capsular shrinkage procedure is accomplished by applying heat energy at approximately 65°C using either a contact probe with the radiofrequency device or with the aid of a holmium–yttrium-aluminum-garnet (YAG) laser. Direct visualization is used to evaluate the degree of capsular contracture. This capsular shrinkage is accomplished circumferentially around the joint from approximately the 10 o’clock position on the glenoid face posteriorly around to the 1 or 2 o’clock position anteriorly. Following the thermal capsulorrhaphy, an assessment of shoulder stability is then made intraoperatively. The authors perform both an examination under anesthesia and an assessment of the ability to translate the humeral head on the glenoid under arthroscopic visualization.

A positive drive-through sign is often seen in these patients prior to stabilization. This arthroscopic test, described by Dr. Russell Warren (personal communication), refers to the ability of the arthroscopist to simply drive the camera through the glenohumeral joint while the patient is in the beach chair position. The inability to drive the camera from posterior to anterior through the joint represents a negative drive-through sign. Following thermal capsulorrhaphy, the drive-through sign is often eliminated. Depending on the degree of instability present preoperatively, the thermal capsulorrhaphy is often supplemented with an arthroscopically performed rotator interval capsular plication. The authors have previously described this technique involving the use of permanent sutures and arthroscopic knot tying.

A standard posterior portal is established, and under direct visualization, a diagnostic arthroscopy is performed. The rotator interval is carefully assessed for laxity either in the interval itself or in the superior glenohumeral ligament. Chondromalacia of the superior glenoid similarly is evaluated as evidence of anterior superior instability. Inferior laxity in the capsule or a subluxation of the humeral head inferi-orly is also an indication of rotator interval problems. The diagnostic arthroscopy is also used to carefully evaluate the attachments of the middle and inferior glenohumeral ligaments including anterior and posterior bands as well as the rotator cuff. Once an adequate diagnostic arthroscopy has been performed, an anterior instrument portal is established under direct visualization. This is placed in the rotator interval adjacent to the subscapularis tendon, avoiding damage to either the superior or middle glenohumeral ligaments. Pathology within the glenohumeral joint is addressed from inferior to superior fashion, repairing any anterior or posterior Bankart lesions or any inferior capsular laxity. Once the entire arthroscopic portion of the reconstruction is completed, attention is turned toward the rotator interval (Fig. 17–1).

• A thorough evaluation of the patient for generalized hyper-laxity is an important clue in helping to determine the multi-directional nature of an instability pattern.

• A comprehensive and extended organized exercise program will usually result in the elimination of instability symptoms.

• Strict immobilization for 4 to 6 weeks is important in maximizing stability for those patients undergoing open capsular shift procedures.

• Failure to recognize the multidirectional component in a patient with shoulder instability may lead the surgeon to recommend surgical stabilization when an exercise program may succeed in effectively eliminating symptoms.

• Failure to recognize the primary direction of instability in a patient with multidirectional looseness may worsen symptoms when the procedure is carried out on the side of the shoulder not involved in the primary instability.

• Whether performed arthroscopically or open, inadequate capsular release inferi-orly with mobilization and shifting superiorly will significantly increase the risks of recurrent instability.

• Extreme care must be taken to protect the axillary nerve when releasing and mobilizing the glenohumeral capsule inferiorly.

• Failure to immobilize the patient’s shoulder for six weeks following stabilization for multi-directional instability will significantly increase the risk of recurrence. 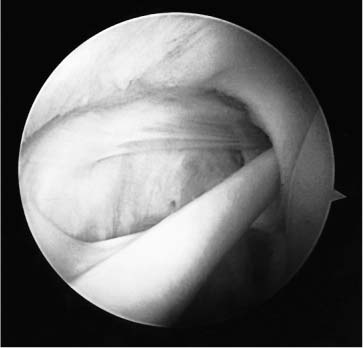 Figure 17–1. The rotator interval is visualized within the glenohumeral joint of the right shoulder between the supraspinatus and subscapularis tendons. (See Color Plate 17–1.)