A 41-year-old manual labor presents 1 hour after a fall at work onto his extended arm. He complains of pain and swelling in and around his elbow and limited motion.

Range of motion is limited from 60 to 80 degrees. The patient’s supination and pronation are only 10 and 15 degrees, respectively. He is moderately tender to palpation about the elbow. He also has moderate tenderness diffusely down the forearm. Mild swelling and pain are present in the wrist as well. Translation of the distal radial ulnar joint also causes pain. He is neurovascularly intact. 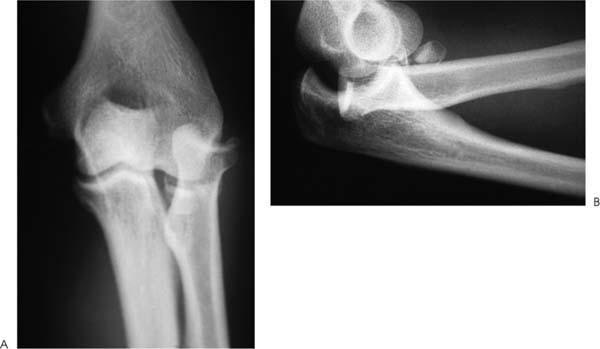 Figure 42–1. Anteroposterior (AP) (A) and lateral (B) radiograph of the elbow.

Anteroposterior (AP) and lateral radiographs of the elbow are obtained (Fig. 42–1).

Essex-Lopresti Lesion. The patient exhibited classic signs of an Essex-Lopresti lesion. The posterior fracture-dislocation with marked displacement of the radial head demonstrates the high-energy trauma that occurred. Significant displacement of the radius, along with tenderness in the forearm, the interosseous ligament, and the distal radioulnar joint, lends support to the diagnosis. An Essex-Lopresti lesion can be defined as an interosseous ligament disruption between the radial and ulnar shafts occurring in combination with other trauma such as a radial head fracture. Abnormal translation between the radius and ulna is seen following disruption of the interosseous ligament. Such abnormal translation typically occurs following a high-energy injury with a concurrent radial head fracture. At that time, the distal radioulnar joint restraining structures, such as the triangular fibrocartilage complex, are also disrupted.

A high index of suspicion must be maintained to identify Essex-Lopresti lesions. Disruptions of the interosseous ligament are uncommon, but when they do occur accurate diagnosis is imperative. Failure to recognize disruption of the interosseous ligament may lead to inappropriate treatment. For example, an Essex-Lopresti lesion associated with a radial head fracture may be treated by radial head excision, if the interosseous ligament disruption is not identified. This may severely affect forearm rotation if proximal radius migration occurs leading to permanent functional deficits. A highly reliable operation to correct proximal migration of the radius is not currently available to the surgeon, emphasizing the value in recognizing this lesion in a timely fashion.

This patient must have his elbow fracture-dislocation concentrically reduced. Also, as a result of the clinical evidence of disruption of the interosseous ligament, every attempt to maintain radial length should be made. This includes radial head and neck fracture fixation, instead of simple excision. In this complex case the radial head and neck, although devoid of soft tissue attachments because of the marked displacement, needed to be maintained because the relatively distal nature of the radial neck fracture precluded the use of Silastic implants. Intraoperative attempts to implant them were unsuccessful because of inadequate stability of the implant within the radial medullary canal.

The surgical procedure used in this patient included a lateral arthrotomy via a standard Kocher approach. Closed reduction had been previously accomplished in the office, but care was taken to liberally lavage the elbow joint at surgery. A number of articular cartilage and small, subchondral bone fragments were removed from the elbow joint. Following lavage and debridement, the radial head and neck fracture was fixed using AO implants (Fig. 42–2). Excellent stability was achieved. Likewise, annular ligament repair was required at the time of surgery. Following fracture fixation, care was taken to repair the lateral collateral ligament complex, which was noted to be disrupted. Intraoperative assessment of elbow stability through a range of motion confirmed stability through full flexion and extension to 15 degrees. Standard subcutaneous and skin closure was accomplished. A posterior elbow splint was then applied. Range of motion exercises were allowed after 3 days. Prophylactic indomethacin, 25 mg taken three times a day, was begun on the day of surgery and continued for 6 weeks. 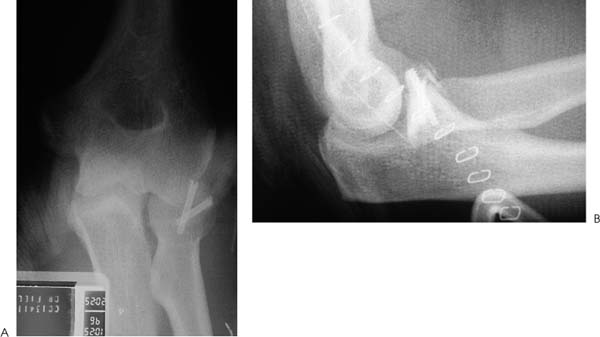 This patient was started on passive range of motion exercises 3 days postoperatively. Activities were progressed over the next 8 weeks. Range of motion at the 2-month follow-up was 30 to 115 degrees, with 40 degrees of supination and 40 degrees of pronation. Over the subsequent 6 months, extension improved 10 degrees and flexion improved 5 degrees. Supination and pronation improved to 70 and 45 degrees, respectively. This loss of motion emphasizes the difficulty in managing a patient with severe soft tissue and bony injuries.

Proximal migration of the radius can occur acutely after trauma or gradually following radial head resection. Complete disruption of the interosseous ligament, in association with a comminuted or a markedly displaced radial head fracture, will allow for proximal radial shaft migration (Fig. 42–3). Partial tears of the interosseous ligament may allow for initial stability, but repetitive loading of the forearm may allow for a gradual proximal migration.

Management of established proximal radial shaft migration due to radioulnar dissociation is difficult. No reliable surgical procedure exists to correct the longitudinal translation of the radial shaft. Therefore, preservation of the radial head by open reduction and internal fixation, or possibly through the use of a radial head implant, should be performed. A silicone radial head prosthesis designed to provide support to the radiocapitellar joint and maintain radial length has been promoted by some authors. Others, however, have reported prosthetic failure, synovitis, and inadequate mechanical support.