A 27-year-old auto mechanic presents with a 4-day history of right shoulder and anterior arm pain following an injury at work. He noticed swelling and deformity of the anterior arm and has subsequently developed bruising in this area. He also reports a 5-month history of untreated, recurrent anterior shoulder pain prior to this incident.

Active forward flexion is 150 degrees and passive forward flexion measures 170 degrees. He has a positive impingement sign and a palpable “catch” in his shoulder with forward flexion and external rotation. There is mild tenderness along the anterior shoulder in the area of the subscapularis and lesser tuberosity. Mild swelling and ecchymosis are present anteriorly. There is an obvious asymmetry of the biceps muscle. Active elbow flexion exaggerates this deformity. A bulbous mass is seen in the middle to distal anterior arm. The patient also has a positive Yergason’s test and a positive Speed’s test. Stability testing of the shoulder fails to demonstrate any abnormalities. Likewise, rotator cuff strength testing is normal.

An anteroposterior (AP), axillary, and scapula Y view of the shoulder fail to reveal any obvious abnormalities.

Proximal Biceps Tendon Rupture. Anterior shoulder tenderness, swelling, and ecchymosis, combined with the obvious biceps muscle deformity, confirm the diagnosis of a proximal biceps tendon rupture in this young manual laborer. The prior history of anterior shoulder pain suggests an ongoing bicipital tendinitis that pre-disposed to the subsequent rupture. Range of motion and strength and stability testing of the shoulder are near normal and not suggestive of a significant rotator cuff tear. However, persistent rotator cuff tendinitis can lead to rotator cuff tearing, contributing to bicipital tendinitis and subsequent rupture through impingement within the coracoacromial arch.

The palpable click or catch in the shoulder through a range of motion could be due to secondary inflammation of the rotator cuff tendon in the region of the biceps tendon. However, a retained proximal biceps tendon stump could also account for such a finding. Differentiation between these two etiologies is often difficult on clinical examination. Even if a retained proximal biceps tendon stump is present intraarticularly, subsequent scarring and granulation tissue formation may stabilize the retained stump and eliminate the recurrent catching sensation.

The patient presented in this case is a young, active individual. Such a patient is considered for repair of his proximal biceps tendon rupture for the reasons cited above. When surgery is performed, the authors perform shoulder arthroscopy initially. Arthroscopy is a valuable tool in the management of proximal biceps tendon ruptures, not only due to its enhanced ability to rule out associated or additional pathology, such as partial or complete rotator cuff tears and retained biceps tendon stumps, but also as a valuable aid in minimizing the incision necessary to achieve biceps tenodesis by precluding the necessity for arthrotomy. Shoulder arthroscopy is carried out with the patient in either the lateral decubitus or beach chair position and standard anterior and posterior portals are established. Careful glenohumeral joint visualization allows for identification of any residual proximal biceps tendon stump (Fig. 29–1). The stump is easily removed with arthroscopic instruments back to a stable rim of superior labral tissue. Synovitis and any other reactive tissue is debrided from the glenohumeral joint and careful evaluation of the articular side of the rotator cuff is carried out. Any partial-thickness undersur-face rotator cuff tears are debrided. If concern over the extent and depth of the partial rotator cuff tear exists, a 2-0 polydioxynone suture (PDS) is placed through the tendon in this area by use of a spinal needle. The subacromial space is then visualized and a complete bursectomy accomplished. If a marking suture has been placed, it is localized and careful evaluation of the adjacent bursal sided rotator cuff is made. If any evidence of chronic bursitis or irreversible changes in the subacromial space are seen, an arthroscopic acromioplasty is carried out. A common cause of failure following repair of proximal biceps tendon ruptures relates to persistent impingement symptoms in the region of the coracoacromial arch. This can occur even in young, athletic individuals. For this reason, the authors routinely perform an arthroscopic acromioplasty when any evidence of chronic impingement is seen.

Following the completion of the arthroscopic portion of the procedure, a 3-cm incision is made in the area of the biceps tendon groove. Dissection is extended through the deltopectoral interval, with retraction of the cephalic vein laterally with the deltoid. Occasionally, the biceps tendon can be palpated in the most distal extent of this incision and pulled into the wound. More commonly, a limited, more distal secondary incision is required. The biceps tendon can generally be palpated in the mid-arm. A 2-cm incision is all that is required to retrieve this tendon. A Kelly clamp or suture retriever is then passed from the proximal to the distal incision and the tendon delivered into the proximal incision.

After assessment of the proper tension on the tendon prior to tenodesis, a number of surgical techniques are available to effect its reapproximation within the biceps groove. The authors perform a variety of tenodesis procedures within the intertubercular groove, depending on the amount and quality of the proximal biceps tendinous tissue. When rupture occurs in the area of the rotator interval capsule, a large retained biceps tendon stump makes for less tissue available to achieve tenodesis. Conversely, when rupture occurs in the area of the superior labrum, a large amount of tissue is usually available. When an ample amount of tendinous tissue is present, the keyhole technique for tenodesis is generally preferred. Following an assessment of the proper tension and position of the tendon within the groove, the proximal portion of the tendon is rolled into a ball and sutured together. A keyhole tenodesis is then performed (Fig. 29–2). This tenodesis is usually supplemented by transosseous permanent sutures passed through the greater tuberosity, biceps tendon, and lesser tuberosity, and then tied. 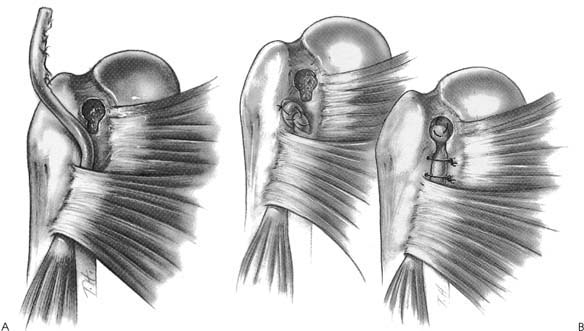 Figure 29–2. Open tenodesis technique for proximal biceps tendon ruptures. (A) Following a limited deltopectoral incision, a key hole is fashioned within the intertubercular groove. The groove is further roughened with a burr. (B) The proximal tendon is then rolled into a ball and sutured together. This balled tendon is then placed into the key hole. Transosseous sutures are then passed from the lesser tuberosity through the tendon and out the greater tuberosity to effect the tenodesis. (Reprinted from Ellman H, Gartsman GM. Arthroscopic Shoulder Surgery and Related Procedures, p. 242. Philadelphia: Lea & Febiger, 1993. With permission.)

An alternative technique used by the authors when less proximal biceps tendon tissue is available involves the use of two suture anchors placed within the depths of the intertubercular groove. The grove is lightly abraided, the anchors are placed, and permanent sutures are passed through the tendon and tied. Supplemental transosseous sutures through the greater and lesser tuberosities can also be used in this repair.

A forearm sugar-tong splint and arm sling is used for 3 weeks following surgery. Ninety degrees of elbow flexion is maintained during this period of time. Gentle passive elbow flexion and extension is then allowed. Progressive activities as tolerated are instituted after 6 to 8 weeks. If arthroscopic acromioplasty is carried out at the time of biceps tenodesis, immediate passive pendulum and forward flexion exercises of the shoulder with the elbow maintained in flexion are encouraged.

• When limited proximal tendinous tissue is present for tenodesis, suture anchors placed within the intertubercular groove can help to effectively supplement the stability of the tenodesis.

• In near-complete proximal biceps tendon ruptures requiring tenodesis, arthroscopic release of the biceps tendon at the superior labrum should be carried out after a traction suture is placed arthroscopically through the tendon. This will maintain the tendon in the intertubercular groove and aid in establishing the correct tension for an arthroscopic tenodesis.