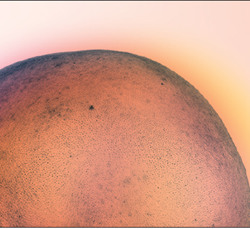 Presentation of the Method

Around 1970, the Japanese physician Dr. Toshikatsu Yamamoto discovered a previously unknown somatope in the region of the head and called it YNSA (Yamamoto New Scalp Acupuncture). Basing his work on the principles of Traditional Chinese Medicine (TCM), he developed a functional, holistic method of diagnosis and therapy that is easy to learn and which in many cases leads to rapid alleviation of complaints.

The corresponding points are usually ipsilateral, in other words, located and treated on the side of the body corresponding to the disease. Already during the first treatment with needles, should patients experience at least an improvement in their symptoms. Patients also often report an immediate pain relief as soon as the needle is inserted in the correct place. Depending on the type of disease, the effect remains for a varying length of time. If need be, above all in the case of acute diseases, needling can be performed every day. Further treatment intervals are based on individual circumstances.

In order to ensure the success of the method, as few needles as possible should be used, but these should be placed at exactly the right point.

Every disturbance in the organism is passed on via central mechanisms to the corresponding place in the somatope and there results in a change which is painful for the patient and tangible for the therapist in the sense of a trigger point. When the area concerned is palpated with a finger, a hardened, swollen site is found which is often very painful for the patient. The needle is inserted from caudal to cranial at a slanting angle into as much of this site as possible and left there for approx. 20 minutes.

YNSA may be used alone or in addition to body acupuncture. Taking into consideration the indications and contraindications which correspond to those of traditional acupuncture, no side effects are observed

In principle, an anatomical somatope may be distinguished from a functional somatope. Yamamoto calls the zones or points which are assigned to the regions of the body “base points.” Base points may be further subdivided into points for the locomotor system and points for the sense organs. For diseases in the region of the brain, the “brain points” are available. If complex disturbances or diseases of “internal organs” are to be treated, the Y-points are another option.

Further subdivision takes place through the representation of the zones both on the frontal (yin) and on the occipital side of the head (yang). These areas are separated by a vertical line that runs through the apex of the ear.

The frontal points are used most frequently for treatment. Only in approx. 2–5% of cases will the occipital points also be necessary for the success of the treatment.

Division of the scalp into yin and yang areas 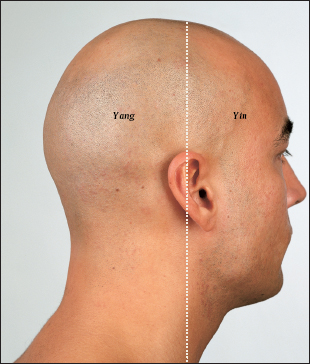 Frontal and occipital base points:
for complaints in the locomotor system.

Localization and Indication of the Base Points

These points are effective above all in the case of painful diseases of the locomotor system.

The frontal base points for the locomotor system are located on either side of the median line in the region of the frontal hairline or temple hairline or on the forehead.

Each zone is approx. 0.5 cm wide and 2 cm long. In this area, the trigger zone must first be palpated and then needled. Individual zones are indicated by the letters of the alphabet, with each letter being assigned to a particular region of the body.

Zone A is located 0.5 cm from the median line and stretches from the frontal hairline 1 cm cranial and 1 cm caudal. It is used for the treatment of complaints in the region of the head and the cervical vertebrae. Zone A can be further subdivided in a craniocaudal direction corresponding to the individual cervical vertebrae. The atlanto-occipital joint is the furthest cranial, the cervicothoracic transition caudal.

Zone B runs 0.5 cm lateral and parallel to zone A. It is also used for the treatment of cervical vertebrae and the shoulder girdle. The extension corresponds to Zone A, but there is no further division.

Zone C is described in the region of the “receding hairline.” If one imagines a 90° angle which is formed by a horizontal line through the eyebrows and the median line and halve this angle, Zone C is located on this line also starting from the hairline 1 cm cranial and 1 cm caudal. The indications for this zone comprise all disturbances of the upper extremity and the shoulder. According to the anatomy, this zone is also further subdivided with the shoulder projected at the cranial start of the zone, the elbow joint precisely at the hairline, the fingers are located at the caudal end of the zone on the forehead.

Next comes Zone E, which is assigned to the thoracic vertebral column and the thorax. discovered later than Zone D for the lower half of the body. For anatomical reasons, however, it is described before Zone D here.

Zone E is located on the forehead. Starting from the body acupuncture point GB-14 it extends diagonally down in a medial direction to the acupuncture point BL-2. Corresponding to the 12 thoracic segments, this zone is subdivided from cranial to caudal, where T1 is cranial and T12 caudal. The indications comprise not only all functional disturbances of the Thoracic Vertebrae Zone (TVZ) but also diseases in the region of the thorax, such as, for example, intercostal neuralgia or herpes zoster, can be treated via this zone. 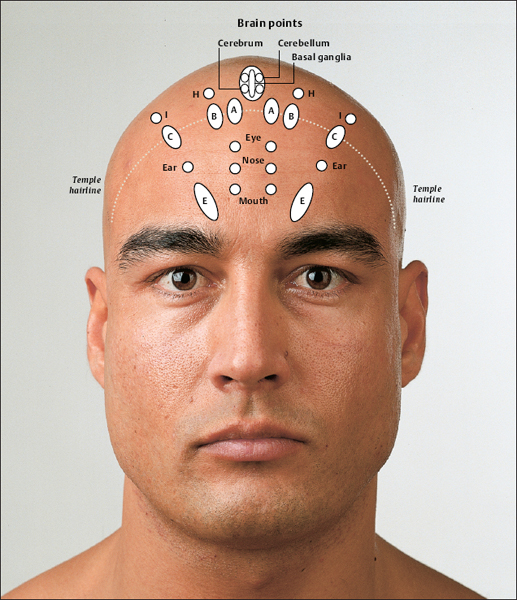 Zone D represents the lower half of the body and is located 0.5–1 cm cranial to the upper edge of the zygomatic arch. It runs from the temple hairline horizontally 1 cm dorsal and 1 cm frontal. Diseases and pain in the region of the lumbar vertebral column and the lower extremity can be treated via this zone, which is not subdivided any further.

Yamamoto cites additional zones not based on the hairline for the treatment of lumbago, ischialgia, and knee and hip complaints.

Zone F is retroauricular above the highest point of the mastoid, cranial to the body acupuncture point TB-17. In addition to Zone D, this zone can be treated along the sciatic nerve in the event of radicular or pseudoradicular pain.

For many years, Yamamoto has been searching intensively for further zones of correspondence in this somatope. Just recently these aforementioned zones were thus extended to include regions H and I.

Zone H is cranial next to Zone B; Zone I is next to Zone C. Both zones may be needled in addition to Zone D in the case of hip complaints or lumbago. 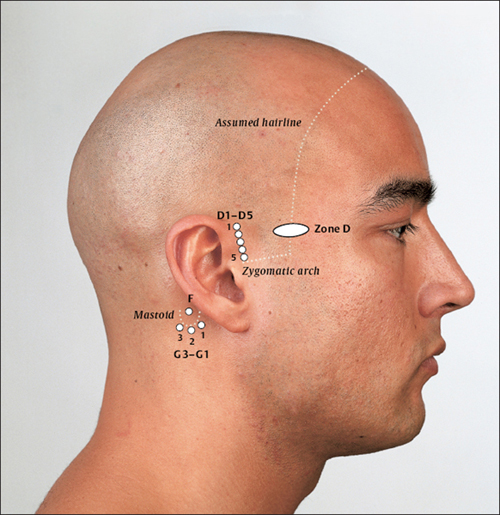 The important “brain points” zone is located on either side of the median line and next to Zone A extending 2 cm in a cranial direction. If the cause of a disease lies in the brain, as for example in all consequences of cerebral insult, treatment can be given via this zone (in addition to or instead of the frontal base points). In these cases, needling is contralateral. The zone itself appears pear-shaped, with the region of the cerebellum in the most dorsal location. The basal ganglia are projected in the area of the median line. 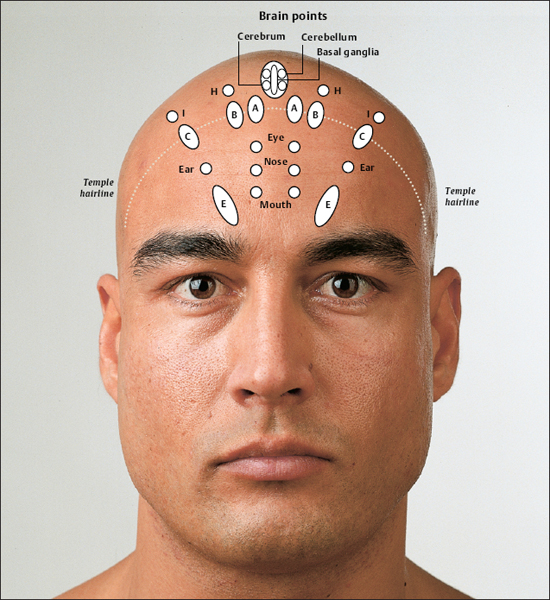 Points for the Sense Organs

The points for the sense organs are located in the area of the forehead and are approx. 1 cm long. Eye, nose, and mouth are located under the other on a vertical line, immediately caudal to Zone A. All functional diseases of these organs are possible indications, such as, for example, conjunctivitis, rhinitis, but also facial paresis, herpes labialis, etc.

The ear is below Zone C on this imaginary line which divides in half the angle between a horizontal line through the eyebrows and the median line. This zone is very often used for tinnitus.

Refresher: Overview of the frontal base points