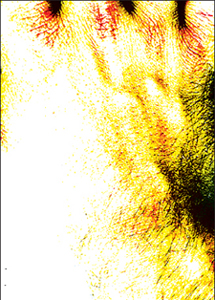 Although Korean hand acupuncture is an independent method, it can also be used in a complementary fashion or in combination with other forms of treatment.

This acupuncture technique was only recently developed by Dr. Yoo Tae Woo, a trained Traditional Chinese Medicine (TCM) doctor, and since 1972 he has been conducting further research with the assistance of his pupils. Today the Korean Hand Acupuncture Society has 180 000 members in Korea alone; there are now also hand acupuncture schools in the United States, Canada, Japan, and France, for example. In Austria, Korean hand acupuncture has been an integrated component of medical training for the Acupuncture Diploma of the Austrian State Medical Board of Registration (ÖWÄA) since 1997.

For the sake of completeness, we shall take the liberty of mentioning Korean hand–foot acupuncture (su jok) which, although it has the same theoretical basis, has a different topography.

The hand is an ideal treatment site, as it can be accessed at any time and the patient does not need to get undressed.

This type of treatment makes it possible to achieve a rapid effect, as the hands are supplied with numerous nerve endings and are represented by a correspondingly large area in the cerebral cortex (homunculus).

The effect of treatment can be monitored immediately by means of pulse diagnosis and palpation.

The side effects and possible risks of body acupuncture (long needles, proximity to organs) are avoided.

All the rules of point selection from body acupuncture are transferable to hand acupuncture.

This chapter provides an overview of the simplest treatment options and the corresponding therapy. The basic therapy will be expanded upon as a further treatment stage and organ therapy touched upon, with a brief description of the channel points. The description of the treatment according to the three constitutions and pulse diagnosis, which unlike the Chinese method compares the radial and carotid pulse, would be beyond the scope of this chapter.

In hand acupuncture it is usual to place up to approximately 20 special hand acupuncture needles (sterile, disposable needles)—which are considerably smaller and finer than body needles—up to 2 mm maximum into the skin using a needle applicator. They are usually left in for 20–30 minutes. The ideal treatment frequency is daily or three times a week. Unlike all other treatments, hand acupuncture also uses silver and gold metal pellets, which afford the therapist and patient the opportunity to further stimulate the diagnostically located points themselves on a daily basis, and thus to improve the effect of treatment. Moxa therapy is also very popular. Here special self-adhesive hand moxa is used on the base points (see below) for general strengthening. At this simplest level of treatment, it suffices to locate the painful area of the body in the corresponding hand zone and to treat it by means of pressing, rubbing, taping on metal acupressure pellets, or needling.

Localization Aids for the Palm of the Hand

The points are divided up in proportion, for example, Conception Vessel K-A Im Ki Mek, 33 points in total.

The following serve as aids to localizing points on the palm of the hand: 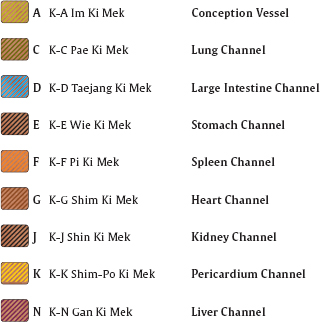 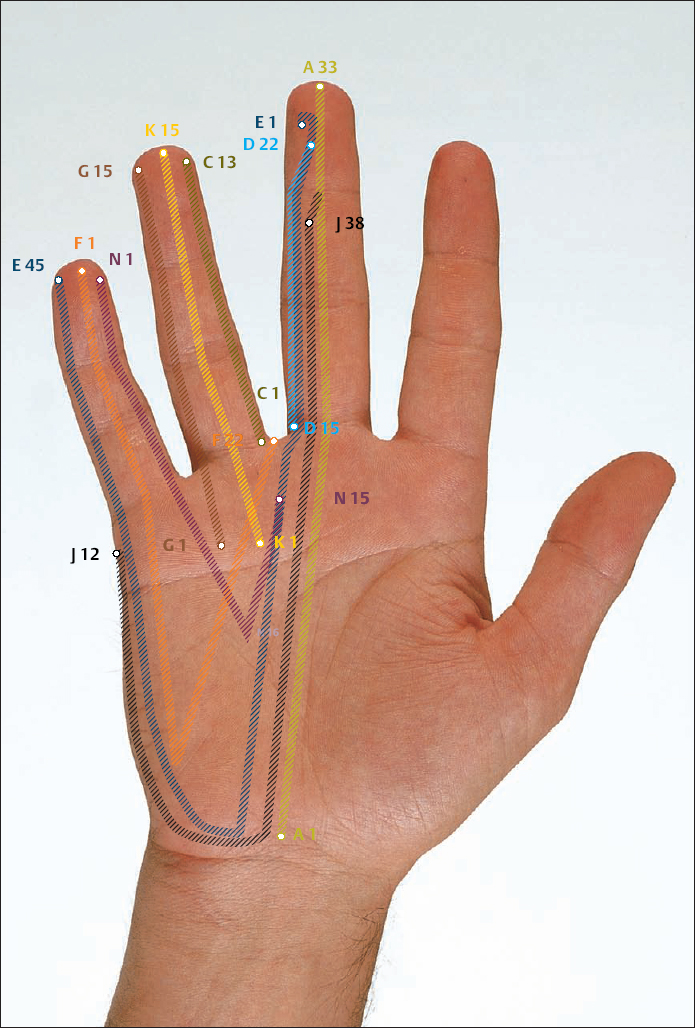 Hand Acupuncture Points on the Palm of the Hand 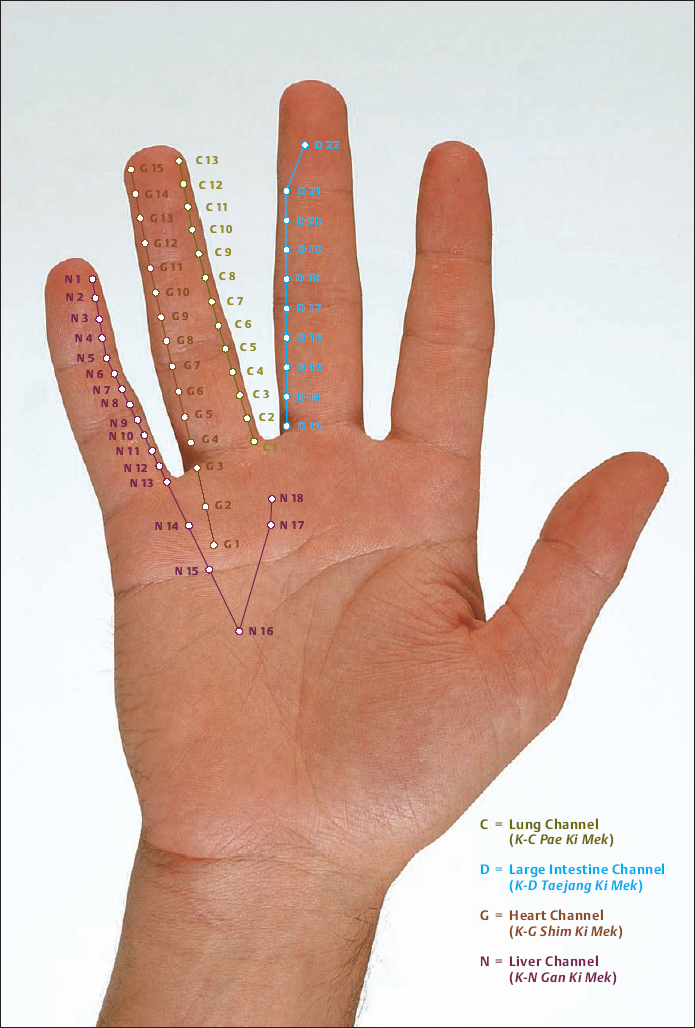 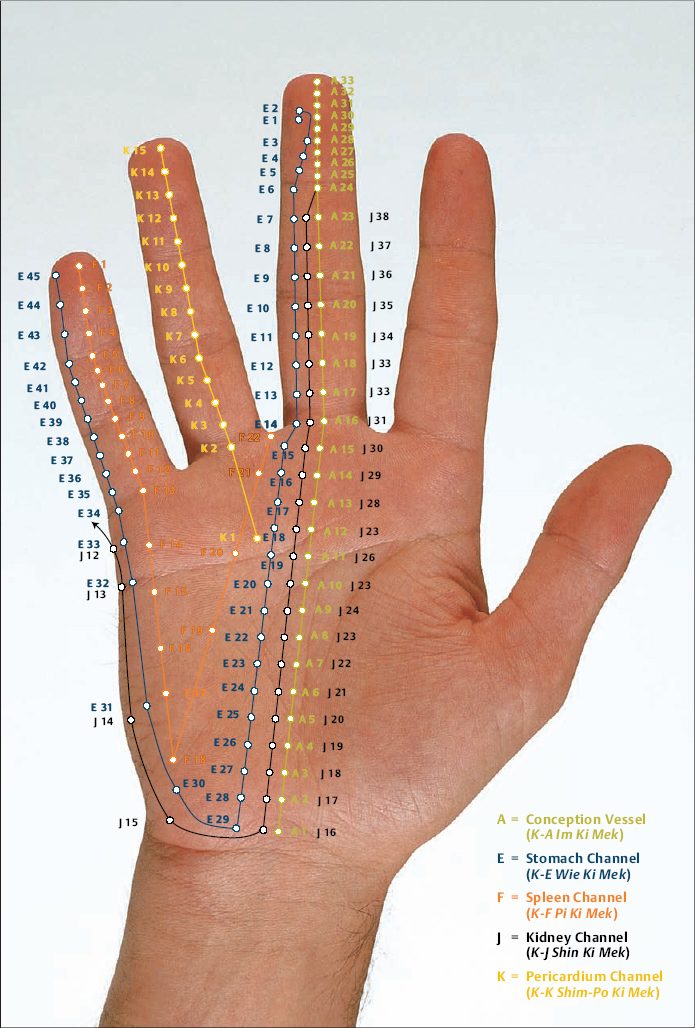 Localization Aids for the Dorsal Surface of the Hand

The corresponding joints serve as aids to localizing points on the dorsal surface of the hand: 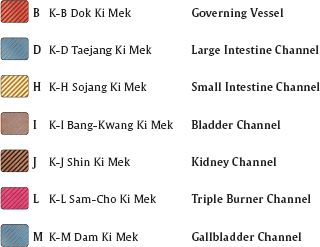 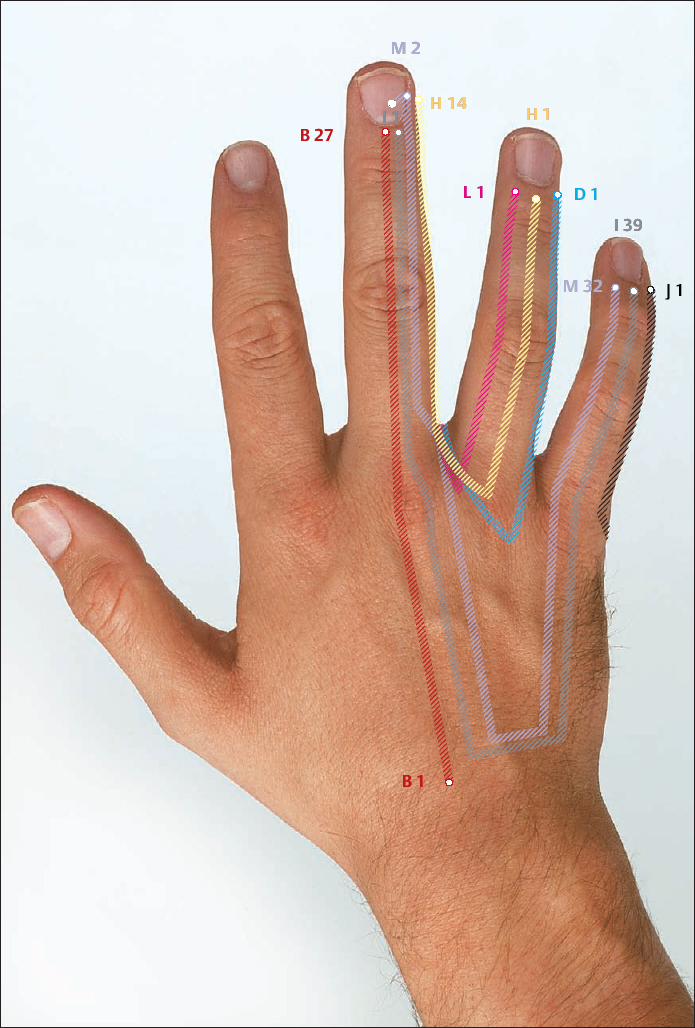 Hand Acupuncture Points on the Dorsal Surface of the Hand 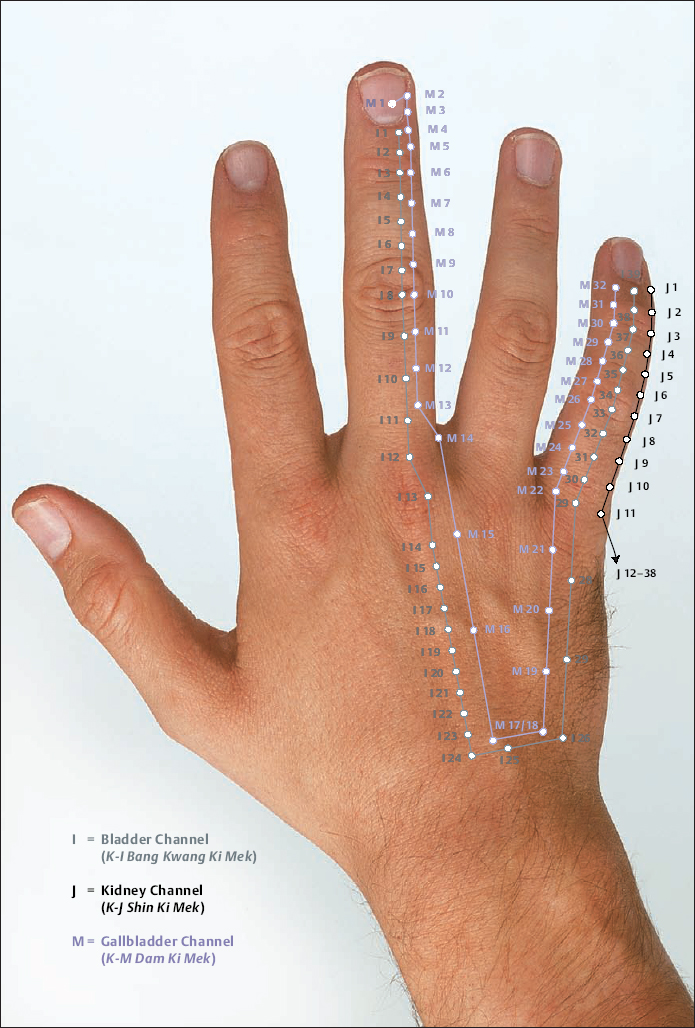 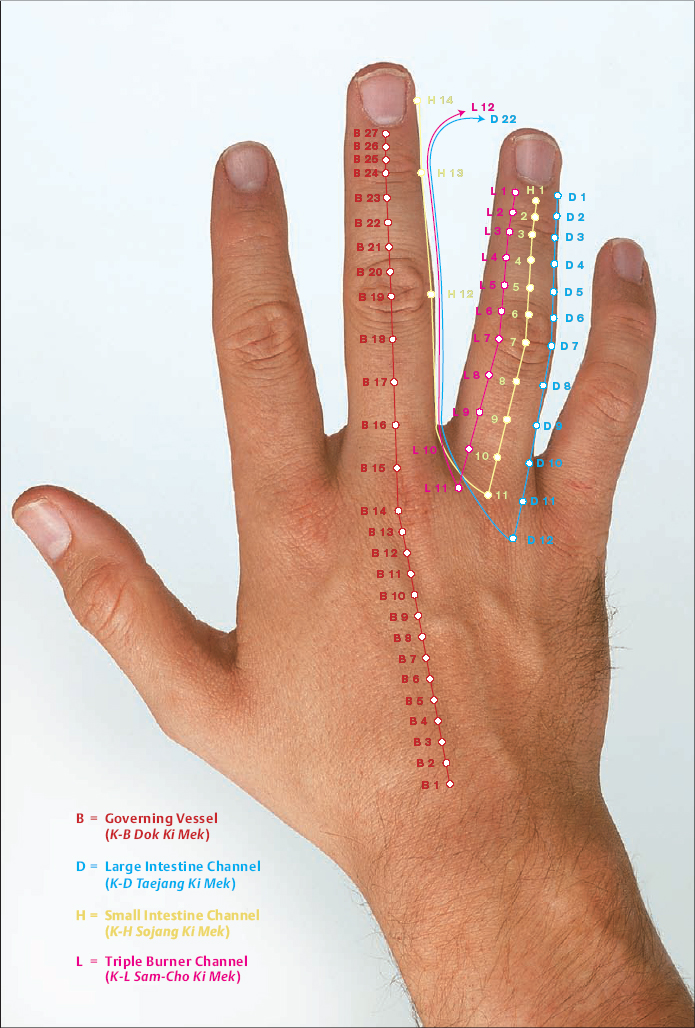 The centerline on the third digit (metacarpal III and middle finger) divides each hand into both halves of the body (A- and B-Ki Mek). 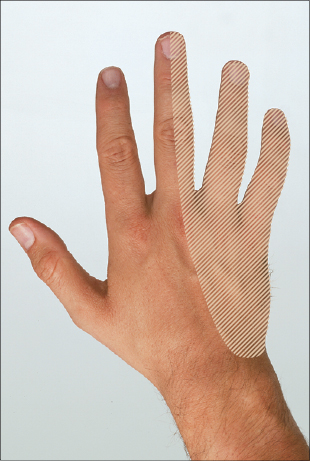 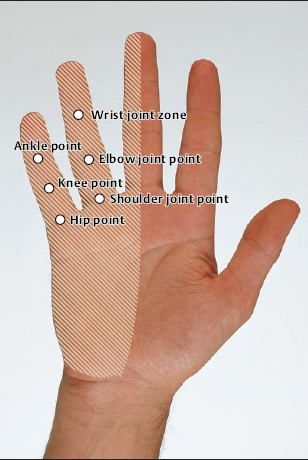 Index finger and ring finger: These correspond to the two upper extremities; the three finger joints to the three joints of the upper extremity (shoulder, elbow, wrist).

Thumb and little finger: These correspond to the two lower extremities; the three finger joints to the hip, knee, and ankle joint. 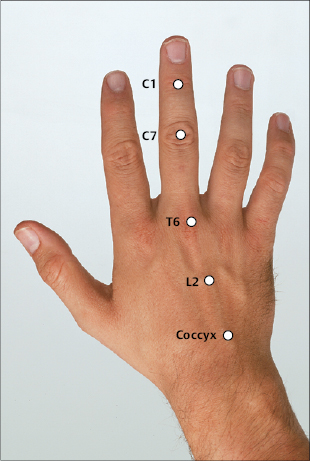 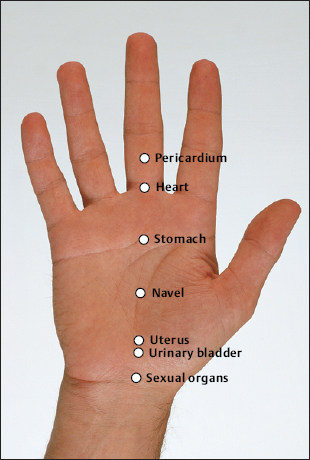 To boost the corresponding treatment, A 1, A 3, and A 8 on the left side are used in men and A 1, A 4, and A 8 on the right in women. Additional base points are selected in accordance with the clinical picture. They are particularly important for chronic diseases and are preferably treated with moxa and included in the treatment. 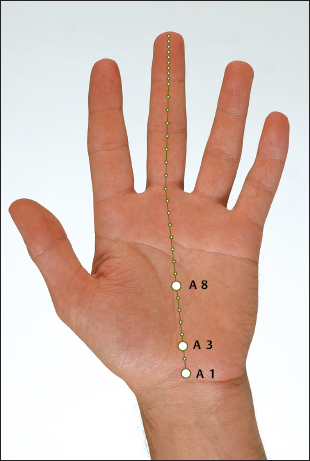 Boosting the corresponding treatment in men 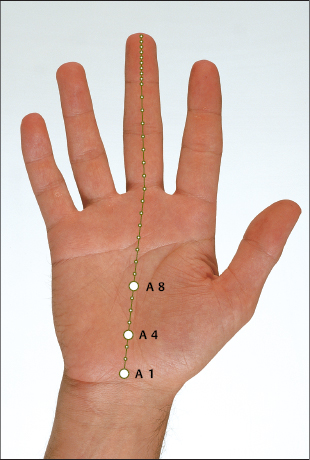 Boosting the corresponding treatment in women

At this stage of the treatment, the existence and direction of flow of the micro-channels with the channel points is used to diagnostic and therapeutic advantage. They correspond almost entirely to the body channels and channel points and can be used with the corresponding needle method and taking into account the energy flow from silver to gold pellets–from minus to plus–from North to South Pole.

The course of hand channels is similar to that of body channels. With two exceptions, all the yin channels are on the palm of the hand and the yang channels on the back of the hand. The Ki Mek hand acupuncture channels are denoted by letters, starting with the Lung Channel (C-Ki Mek), and then continuing in alphabetical order according to maximum periods of organ energy (C–Lung, D–Large Intestine, E–Stomach, F–Spleen, etc.). The direction of the channel is determined by numbering from lower to higher numbers of points. The number of points on the Ki Mek does not always correspond to the number of body channel points and might, therefore, be confusing initially. 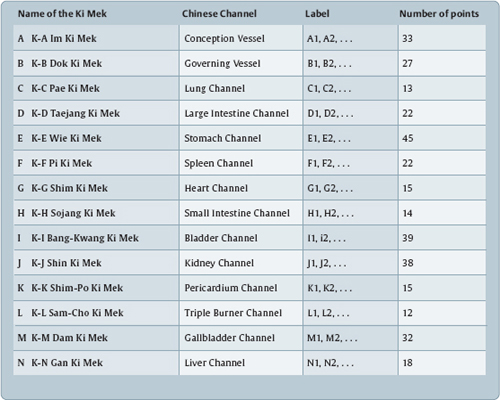 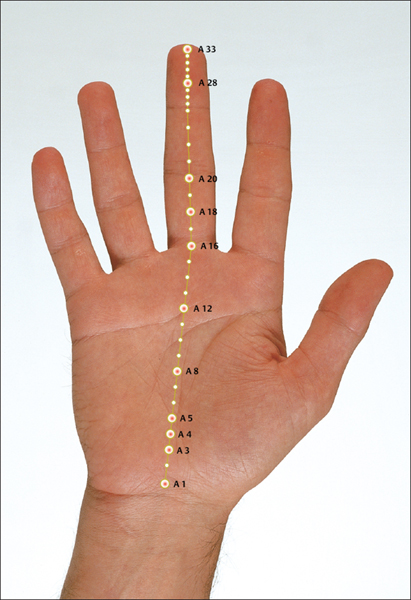 The K-A Im Ki Mek corresponds to the Conception Vessel of body acupuncture and runs straight along the centerline on the palm of the hand—corresponding to the third digit. It starts at A 1 (5 mm distal to the center of the distal flexion crease of the wrist) and ends at A 33 (2 mm proximal to the nail) on the middle finger. In contrast to body acupuncture, the Governing Vessel is represented from the upper lip to the parting (GV-26–GV-20) by the Governing Vessel (A 26–A 33) in hand acupuncture. The points on the palm of the hand, likewise on the middle finger, are proportionally allocated, i.e. they are found by dividing in half each time (cf. illustration on left: e.g. point A 8— navel—is located precisely halfway between points A 1 and A 16).

The K-A Im Ki Mek plays an important role in both the diagnosis and treatment of diseases. Most alarm points, i.e. those points which indicate the condition of the corresponding organ, are located on the Conception Vessel. It is the “Sea of all Yin Channels” and like the Governing Vessel and the chong mai (“Thoroughfare Vessel”), obtains its energy from the kidneys and, consequently, has a link to the essences. Its chief significance is for the reproductive system, as it controls fertility, menstruation, pregnancy, and menopause. Individual points lead in particular to a strengthening of the yin or the yin organs and are therefore used in particular for vacuity–heat symptoms in the Lower Burner, but also in the Middle and Upper Burner. The Conception Vessel (Im Ki Mek) has its opposite number in the Governing Vessel (Dok Ki Mek), which explains the positive effect obtained by needling the corresponding area of the lower abdomen (A 1–A 8) in cases of deep, median lumbago—according to the front-to-back rule.

A 18: Pericardium alarm point, main point for all thorax complaints, important point of the upper burner

A 20: Larynx, pharynx, and gullet pain