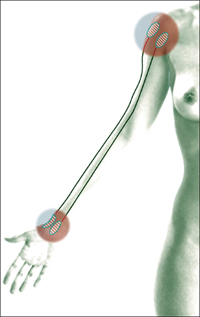 New Point-Based Pain and Organ Therapy (NPPOT) is a type of neural therapy or acupuncture described by Siener. It has continued to be developed by his students since his death in 1993.

In order to ensure that this therapy had a lasting effect, Sienerintroduced a “pre-therapy treatment”. This treats damage caused by analgesic and psychiatric drug use and abuse, as well as the effects of viral infections (chronic Epstein Barr, varicella-zoster, herpes, and other viral infections), and testing by BFD (Bioelectronic Functional Diagnosis) or EAV (Electroacupuncture according to Voll).

This measure is necessary here as it is with any other methods for treating chronic pain in cases of regulatory blocks and is therefore nonspecific. However, in most cases, this measure is not necessary for the method to be effective.

This chapter shows a topographic system for the treatment of vertebral and muscular disturbances as well as outlining the topography, according to Siener.

In principle, NPPOT topography is a type of somatotopy, though not meant strictly here, as it does not concern representation of the entire body onto a small area such as the temples in YNSA, the ear in auricular acupuncture, or a metacarpal in hand acupuncture, etc.

Just as Felix Mannfound the area LR-3 effective for almost all disturbances of the axis organ, similar to the iliosacral joint region, it can be said that it was possible to define the distal, large joints of the hand and foot as particularly effective projection zones for reflex therapy.

The localization system is similar to the channel axes of traditional acupuncture.

This applies to application in the locomotor system and is described below. 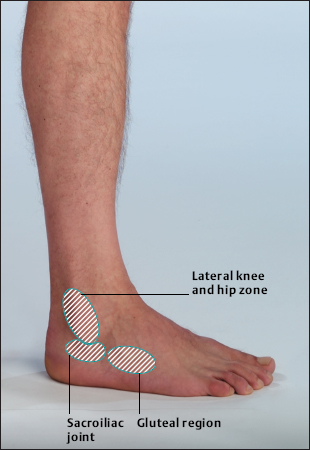 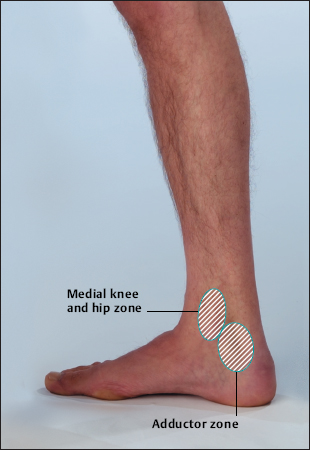 Projection Zones of the Iliosacral Joint, Hip, and Knee According to Siener

The often puffy, swollen region above the cuboid bone corresponds to the gluteal region. The projection of the sacroiliac joint is beneath the outer ankle.

It is possible to look for further secondary reflex points distal to the former ones on the same axis. These are located on the Bladder, Gallbladder, Stomach, Liver and Spleen Channel. 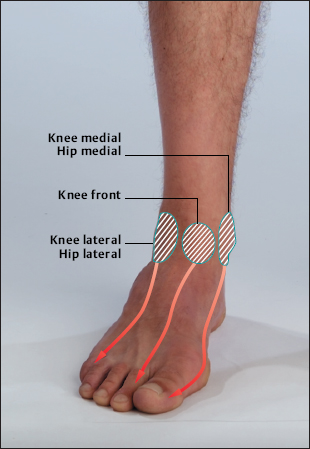 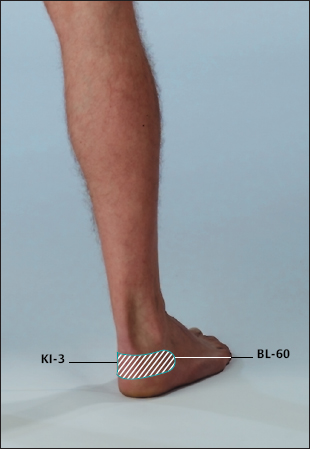 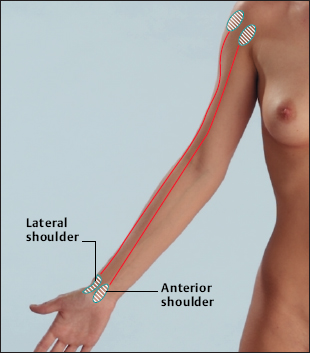 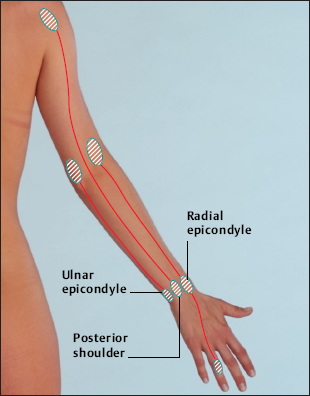 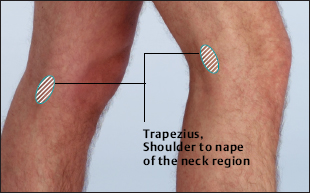 Projection Zones of the Shoulder and Elbow According to Siener

Similar to acupuncture, areas specific to the Small Intestine, Triple Burner, and Large Intestine or Lung Channel surrounding the wrist joint are used for the dorsal, lateral, and anterior shoulder. An extension of the “response ray” in a distal direction surrounding the finger joints may also be effective here.

This is further reinforced according to manual treatment principles, as a relatively large number of cervical and cervicogenic complaints (shoulder and elbow) are the result of an imbalance in the lower extremity and the pelvis with subsequent compensatory scoliosis. According to the principles of craniosacral osteopathy, there are no isolated upper or lower imbalances so that the common principle of top-to-bottom coupling in acupuncture is also plausible.

Where the hamstrings are attached to the fibula there is an effective zone for relaxation of the upper trapezius.

Both Matsumotoand Mannindicate the effectiveness of the region surrounding SP-9 in the trapezius area in some cases.

Areas for the Treatment of Internal Organs

Different rules apply to the topography of the internal organs, and the pattern resembles a somatotopy; the head is represented on the knee and the face on the patella. The cranial tibial area and the adjacent musculature correspond to the thorax organs and the central lower leg region to the upper and lower abdominal organs.

The projection zones can be located either according to this large, graphic principle or by using the “very point” dabbing technique. However, this is not a precise means of determining whether the point located corresponds to the region to be treated or rather indicates another active point.

The epiglottis is located on the lower edge of the patella at the 6 o’clock position, bilaterally, while the trachea, thyroid gland, and bronchial tubes follow in a caudal direction. 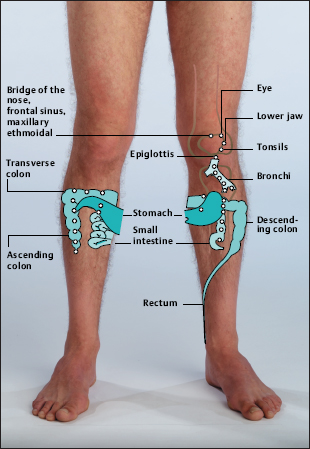 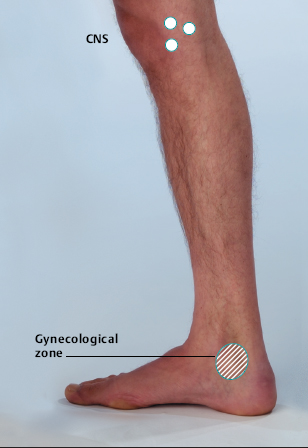 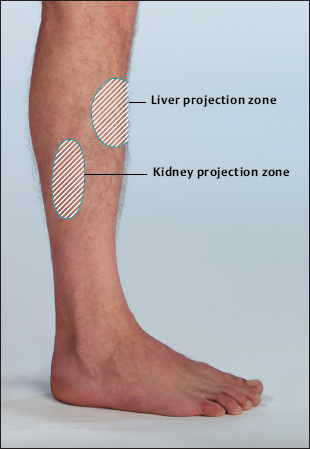 The internal genitals and gynecological regions are typically found within the Kidney Channel at KI-4 to KI-6.

Using the “very point technique” within the medial knee area, an equilateral triangle can also be found, which has a hormonal and psychotropic regulatory effect. These points represent the Hypothalamus, Pituitary Gland, and Limbic System.

The effective points can be found by means of trial and error and the “very point” technique using an acupuncture needle or size 20 cannula with a 5 ml procaine syringe. However, the points can also be found using auriculocardiac reflex (ACR) or Applied Kinesiology therapy localization.

The author’s experience to date suggests an acupuncture needle is more effective in the treatment of internal organs, where needling is in the muscular region. However, an injection of 0.2 ml procaine surrounding the locomotor system points is more favourable where periosteal treatment is the most effective. However, an acupuncture needle can also be used here, as accuracy is paramount.

Sensitive patients may find this treatment technique very painful and be unable to tolerate it. In this case, electric point searching with a resistance meter can be used (standard acupoint searching devices) followed by laser treatment.

The author rates the pulsed laser (Nextlaser), made by Sedatelec. This device may produce qilike sensations during radiation treatment. There are also some competitively priced laser pointers used in slide presentations, which may also be effective.

In the case of diseases of the locomotor system, there is an immediate effect, as with auricular or scalp acupuncture, if the correct point is treated. The effect usually lasts longer per treatment than with scalp acupuncture according to Yamamoto.

The technique can, of course, be supplemented by needling and therapeutic local anesthesia of the painful sites (e.g. the sacroiliac joint) and the local trigger points, as well as by Manual Therapy, and can therefore be more effective as a result.

In diseases of the locomotor system, the result is similar to that following treatment by a different microsystem. If successful, results are immediately apparent. If not, a different system must be used (scalp acupuncture, auricular acupuncture, body acupuncture, etc.).

Some diagnoses are rather vague, for example, “lumbar-like complaints.” This is, however, not critical, as in the case of both radicular and pseudoradicular syndromes, an effect may be achieved without considering the etiology.

Treatment may be effective for sinusitides, bronchitides and functional disturbances of the thyroid gland including nodular goiter, where the thyroid hormone levels can become normalized.

Complaints of the kidneys and deferent urinary passages and dysmenorrhea may be treated with this method and, in addition, mastopathies. Surprisingly, an improvement of the tissue structure can also be achieved here by treating the mammary gland area, which is usually in the region of the Stomach Channel.

Hormonal imbalances are treated via the “central nervous system (CNS) triangle”, made up of the hypothalamus, pituitary gland, and limbic system. This combination also has a psychotropic effect.

Where there is muscle dysfunction, local reflex zones and trigger points that can be clearly assigned to a channel (cf. tables p. 308 onwards), can be palpated. For example, the anterior tibial muscle has typical and frequent reflex zones that correspond to points ST-36 and ST-38, resulting in the assignment of this muscle to the Stomach Channel.

The distal acupuncture point most likely to be effective in treating individual muscle dysfunctions can be found as a result of this assignment, as the acupuncture channels correspond to the sequence of the trigger points and reflex zones in the muscles of a kinetic chain. Remote points are no more than particularly effective points in the periphery of a muscular lesion chain that are all found in the region of the wrist, ankle joint or knee.

Individual muscles can also be treated using this method. The cutaneous segment, where the muscle lies, is first located and then assigned to a typical point on the channel, belonging to the segment (cf. tables p. 312 onwards) near the wrist joint, ankle joint, or knee joint. Consequently, this corresponds to the simple method indicated by Siener, who at the time spoke about having to drop a perpendicular from the painful region, from the proximal painful area to the periphery and finding a point of maximum response on the large joints.

Where corresponding acupuncture points are listed in the tables on page 308 et seq., this refers to an area in which the point of maximum response and maximum effect can be found (e.g. by means of a “dabbing” needle using the “very point” technique).

It is recommended that muscular and bony areas in this peripheral region be examined, as a needle (or laser) in the muscle can from time to time have a completely different effect to stimulation of the periosteum.

It should be remembered that the local points in the musculature must also be treated.

The same method of segmental organization and overlapping of dermatome, myotome, and sclerotome can be used to treat vertebral lesions (vertebral dysfunctions or subluxations).

The simplest options for segment-related acupuncture of vertebral lesions are listed in the following illustrations and tables. These can be used on their own or as a supplement to Manual Therapy.