Oral Acupuncture is based on a somatotope of reflex points in the oral cavity. The enoral points are situated in the mucous membrane. They were discovered and established in the 1970’s, following many years of observation. As an ear, nose and throat specialist as well as a dentist, I carried out my investigations and observations on many thou sands of patients. In this way, the concept of Oral Acupuncture emerged.

The oral microsystem has proved to be useful both in diagnosis and therapy. In case of functional disorders of inner organs, specific points in the oral mucous membrane become sensitive to pressure. Owing to the points’ increased sensitivity, they can be clearly distinguished from their surlingual roundings. Treatment of such activated points may regulate the dysfunctions of correlated organs and their functions.

Immediate effects are common in Oral Acupuncture, similar to those in auricular and in scalp acupuncture.

In Oral Acupuncture there are five groups of points: 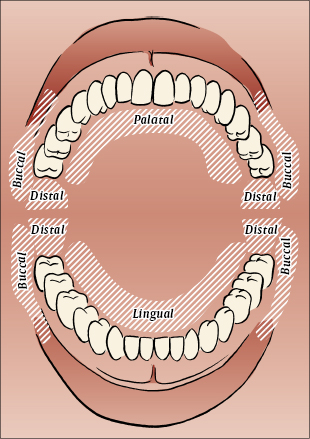 Anatomical areas in the oral cavity 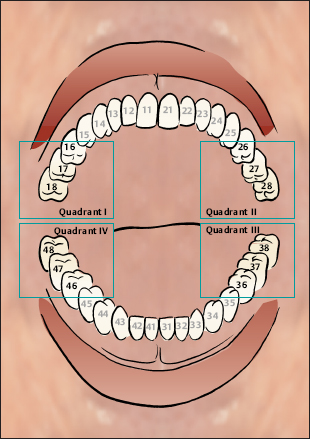 The systematics of Oral Acupuncture can be best understood when considering the correlations of the vestibular points.

In the early 1960’s, Voll and Kramer from Germany discovered and decoded the mutual correlations between the respective teeth and the channels of acupuncture. These findings were made by means of electroacupuncture.

Points at the anterior edge of the ascending mandible are labeled as RAM points (ramus ascendens mandibulae).

As each vestibular point as well as each retromolar point is correlated to a specific functional network, the points share the indications of both channels involved. These indications are not limited to somatic aspects only.

The correlations of both, teeth as well as vestibular points, are divided into five categories: 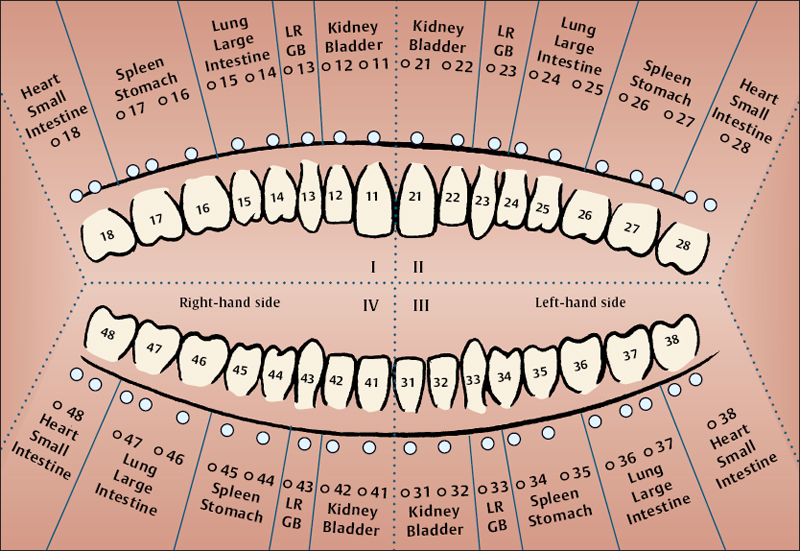 Channel correlations of the teeth and of the adjacent vestibular points

As can be seen, each category of vestibular point (just like each category of teeth) corresponds to a yin–yang channel pair (“coupled channels”). In Traditional Chinese Medicine (TCM), each one of the couples represents one of the respective five phases, in traditional terms “elements.” In modern understanding, the traditional elements, or phases, are to be explained as regulatory circuits (i.e. functional networks).

According to TCM, the couple of triple burner–pericardium channels is not classed within the five phases. It is worthy of note that this couple is neither represented in the vestibular nor in the retromolar regions, but in a separate zone at the anterior edge of the ascending mandible.

The two midline channels–du mai (governing vessel) as well as ren mai (conception vessel)–terminate within the oral cavity, that is, in the mucous membrane next to the frenula. These terminal points have special therapy indications and therefore may well be included in oral acupuncture.

Projection Diagrams of the Retromolar Zones in Quadrants I–II

Projection Diagrams of the Retromolar Zones in Quadrants III–IV 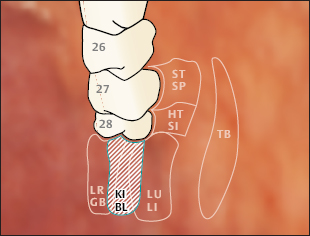 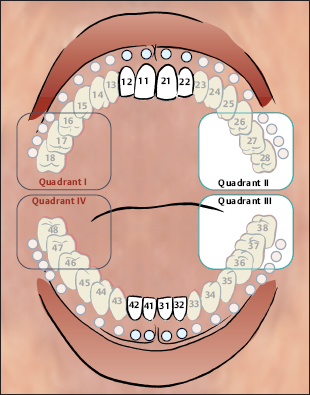 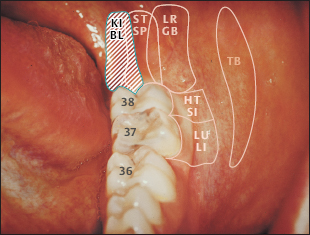 The vestibular points correlated to the kidney–bladder network are situated opposite the crowns of the incisor teeth of upper and lower jaw, right and left.

“Kidney–bladder zones” in the retromolar space are projected

a) in the upper jaw: distally of the tuber maxillae,

a) in the lower jaw: lingually in the retromolar space.

Effects of oral acupuncture as well as results of electroacupuncture tests have confirmed that the so-called “yang kidney”–including the adrenals–is represented within the retromolar “kidney zone.” 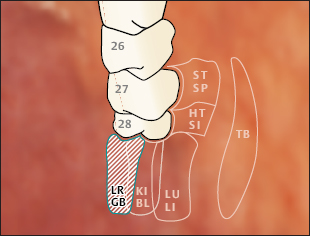 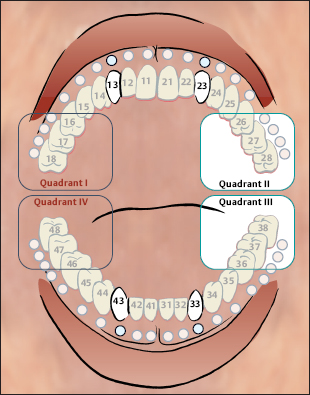 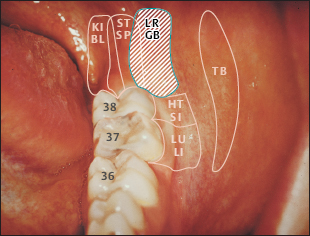 The vestibular points correlated to the liver–gallbladder network are situated opposite the crowns of the canine teeth of upper and lower jaw, right and left.

“Liver–gallbladder zones” in the retromolar space are projected

a) in the upper jaw: palatally in the retromolar space,

a) in the lower jaw: buccally in the retromolar space. 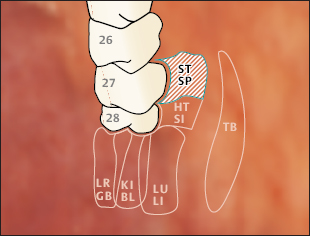 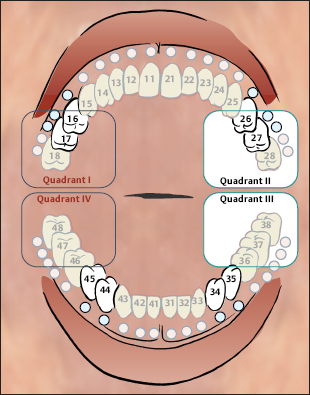 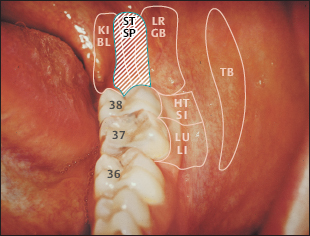 The vestibular points correlated to the spleen–stomach network are situated

“Spleen/pancreas–stomach zones” are to be found in the middle section of the retromolar spaces, especially in the lower jaw.

Dysfunction of the connective tissue

NOTE This is vice versa to the localization of spleen points.

“Lung–large intestine zones” are to be found buccally in the retromolar space, especially of the upper jaw.

Dysfunctions and infections of the respiratory system, bronchitis, bronchial asthma, sinusitis, and rhinitis

Intestinal complaints, dysbiosis of the microflora 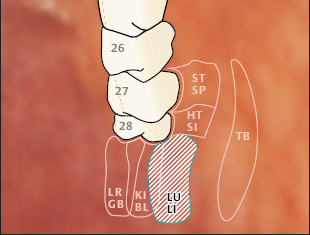 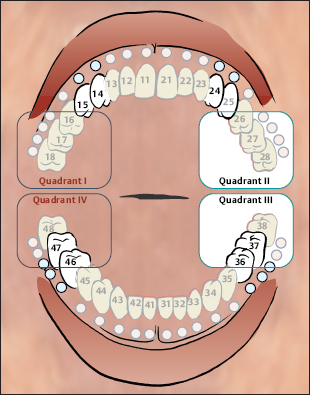 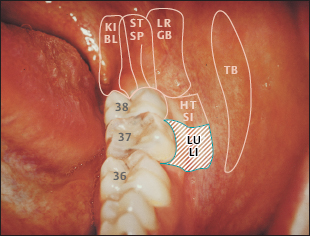 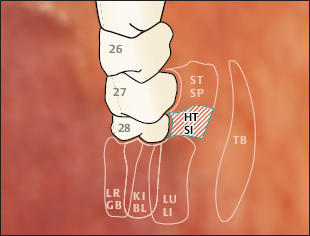 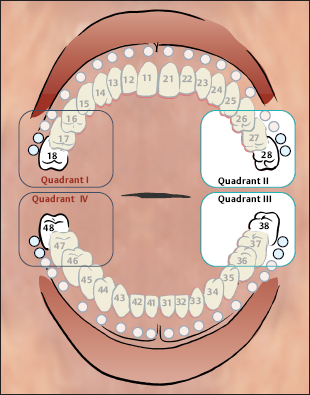 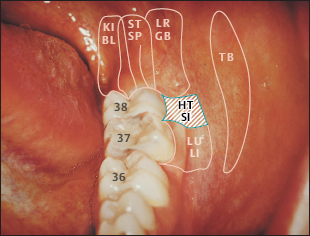 The vestibular points correlated to the heart–small intestine network are situated adjacent to the wisdom teeth, i.e., next to the mucobuccal fold (O-18; O-28; O-38; O-48).

The wisdom teeth area is the link between vestibular and retromolar point systems.

There is no assignment to vestibulum points. The Triple Burner is represented at the front edge of the ascending mandibula. This area has to be palpated carefully by pressing the finger tip against the frontal edge of the ascending mandible, gliding upward from the linea obliqua: the Triple Burner points are found halfway between the upper and lower jaw. The pericardium channel seems to be projected at identical points. 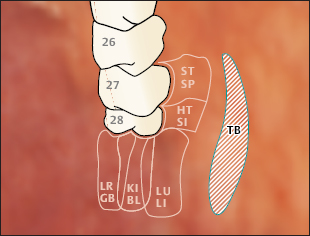 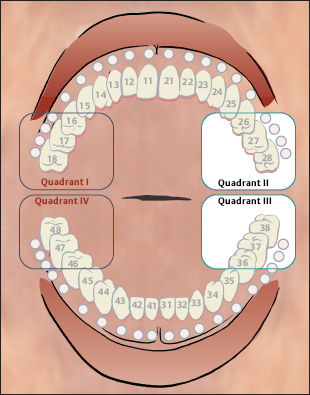 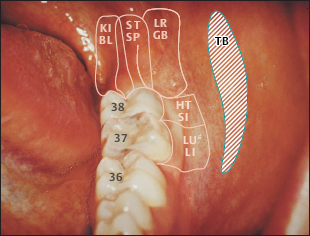 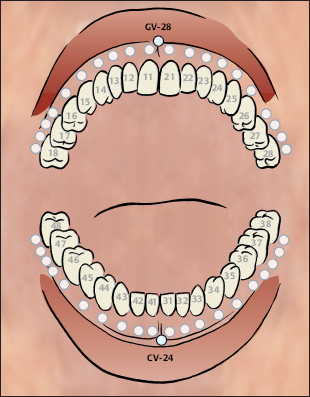 These points have to be detected at either side of the frenula.

Extraoral points of special importance are to be found close to the outer edge of the lips. Their location is derived from the analogous enoral points suggesting a perforating needle. Point detection is preferably performed by the “verypoint” technique (see p. 242) i.e. dabbing the acupuncture needle tangentially across the skin, parallel to the lip in a distance of one centimeter.

The extraoral point analogous to the enoral canine point proved very effective in treatment of hip and knee complaints.

The respective joints and parts of the musculoskeletal systems can be treated by points correlated to their respective segments and channels.

The lumbar spine is represented buccally in the lower wisdom teeth in an area extending towards the retromolar area of the lower jaw.

The iliosacral joint is represented lingually in the retromolar area of the lower jaw, next to the “Kidney–bladder zone.”

For shoulder–elbow complaints, use points situated buccally and distally in the retromolar area of the upper jaw.

Hip and knee complaints are preferably treated by vestibular points, that is, by canine points of the lower jaw (O-39/O-49).

In the list above, preference has been attributed rather to retromolar points because these are generally superior in treatment. Vestibular points are prior in diagnosis. However, they may be treated additionally if therapy in the retromolar space proves unsatisfactory. 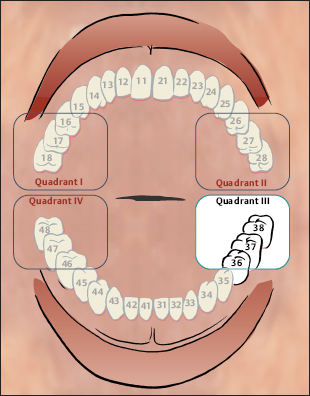 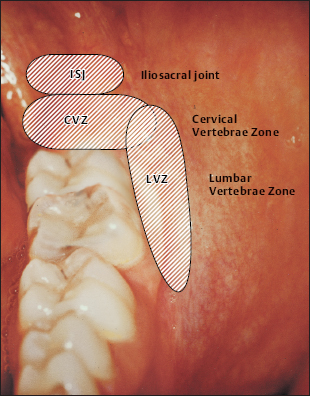 Correlations of the spinal column and of the iliosacral joint

In cases of excruciating pain—such as trigeminal neuralgia—treatment must only be applied contralaterally to the afflicted area. In this case, exactly symmetrical points must be detected both in the face and enorally. Any local pain condition of the stomatognathic system can be treated via analogous points sharing the same network correlation. This applies to points of the contralateral jaws, of the counter-jaw, as well as to retromolar points of the afflicted quadrant.

In case of long-standing conditions, it is advisable to search for scars in the affected quadrant. If such relicts of earlier injuries prove sensitive to instrumental detection, the scars should be injected with a local anesthetic.

In general, the rule of homolaterality applies to Oral Acupuncture. For instance, complaints on the left side are treated via the Oral Acupuncture points on the left. In chronic illnesses, however, bilateral injections have proved beneficial. In acute pain conditions, symmetrical therapy is applicable (see above).

2. Firm support of the patient’s head

4. Examination by palpation and/or instrumental detection

Treatment should be limited to only three to six points per session. This helps to avoid an initial worsening of symptoms. This kind of over-reaction may occur especially following the first session. However, it indicates that the patient’s self-regulatory systems have been stimulated successfully.

In cases of nonresponders to oral acupuncture,other microsystems and/or traditional acupuncture must be included.

Oral points, if indicated for therapy, show a higher degree of sensitivity. Therefore, palpation is an important feature in Oral Acupuncture. The points chosen for treatment have to be precisely localized. Digital palpation, of course, can only give rough hints. Bioelectric detectors do not work in the oral cavity because of the moisture of the mucous membranes. For exact spotting, therefore, detection by means of an instrument with a fine tip is necessary, e.g. using a fine ball probe (as used by dentists for fillings).

Most precise localization can be achieved by using the injection needle itself as a detection instrument (“very point” technique). For this purpose, the needle has to be handled very gently, dabbing it gradually and tangentially in a non-traumatizing manner across the suspect area. At the selfsame moment when the “very point” is hit, the patient will invariably respond with an unmistakable facial expression and/or a verbal affirmation. At this instant, the needle must be slightly erected and inserted.

The “very point” technique was developed to meet the special conditions of Oral Acupuncture. However, it is also applicable at skin points.

Oral Acupuncture is best administered by means of injections, as the use of needles in the oral cavity is dangerous. Only the finest disposable cannulas and preferably insulin or tuberculin syringes are to be used, or very fine dental cannulas.

Local anesthetics of low percentage (0.2–0.5%) have proved most effective in Oral Acupuncture. Instead, physiological sodium-chloride solution or homeopathic remedies may be used as well. The quantity of local anesthetic used should be kept as low as possible. It is not the amount of injection fluid that matters but hitting the exact point. As a rule, it will be sufficient to inject two to four drops per point. After injection, the bubble should be dispersed by digital massage.

Low-level laser acupuncture has proved suitable in Oral Acupuncture because it is painless, an important feature in the treatment of hypersensitive patients. Overstimulation must be avoided at any rate. No more than four to six points should be treated per session. The duration of irradiation depends on the output of the device.

Electrostimulation is contraindicated in the oral cavity.

If treatment is performed lege artis, adverse sideeffects are most unlikely. Initial deterioration may occur. It is indicative of onsetting regulation.

Caution is required when treating patients who are receiving anticoagulative therapy.