The radiologic diagnosis and differential diagnosis of an acute fracture is usually not associated with any problems. A sharply demarcated fracture line is the hallmark of an acute fracture. Depending on their radiographic appearances, fractures are classified into different types (Fig. 4.1). Occasionally, however, a frank fracture line cannot be demonstrated in un-displaced fractures immediately after injury even when films in several projections are taken. Demonstration of either a cortical break that has to be differentiated from a nutrient artery or disruption of the normal spongiosa pattern may be the only clue in these instances to diagnose a fracture. Magnetic resonance imaging or a nuclear medicine scan is otherwise required to arrive at the correct diagnosis.

In the presence of clinical evidence of a fracture, a zone of increased bone density or an abnormal angulation may suggest radiographically an acute fracture, although these findings can also be encountered in healing fractures and other bone diseases. At least some degree of soft-tissue swelling can be seen radiographically in virtually all acute fractures, but this finding is of little use to differentiate a fracture from a distortion or other soft-tissue injuries.

Fracture healing begins with an acute inflammatory response resulting in the organization of the fracture hematoma by invasion of fibrovascular tissue. At this stage, bone resorption along the fracture margins becomes evident and in undisplaced fractures may allow at this stage (several days after the injury incidence) an unequivocal radiographic diagnosis. Periosteal and endosteal callus formation usually becomes visible two to three weeks after injury and is first evident as a thin periosteal reaction and irregular mottled calcifications about the fracture, increasing with time in density, and finally developing bone texture. The healing process of a noncomplicated fracture from injury to consolidation takes one to several months. Fracture healing progresses more rapidly in oblique or spiral fractures, in a single fracture, and in younger patients. The healing process is slower in larger bones, in transverse fractures, in the presence of multiple fractures, and with increasing age of the patient.

A delayed union is found with poor reduction, incomplete immobilization, in the presence of infection, in vitamin C and/or D deficiencies, and in areas of preexisting bone disease (pathologic fractures). Infections are particularly common in compound fractures, where extensive soft-tissue damage is caused by either a fracture fragment piercing through the skin or by an object (e.g., a projectile) penetrating from the outside.

Malunion refers to a fracture that is healed with significant fracture fragment displacement and/or angulation. A nonunion is characterized by failure of fracture healing 6 to 9 months after injury. The fracture margins are well delineated and often sclerotic and a frank area of intervening translucency is present. Nonunion may result from the same complications associated with delayed union or by interposition of soft tissue between the fracture fragments. Hypertrophic nonunion is commonly caused by continued motion at the fracture site. In these cases the fracture line persists or excessive and prolonged bone resorption at the fracture margins occurs. Eventually the bone ends become sclerotic, and there is a varying degree of non-bridging external callus formation. Atrophic nonunion is thought to result from extensive bone death. The radiographic appearance is that of a persistent fracture line without demonstrable callus formation (Figs. 4.2 and 4.3). Nonunion may eventually progress to pseudarthrosis formation (Fig. 4.4). 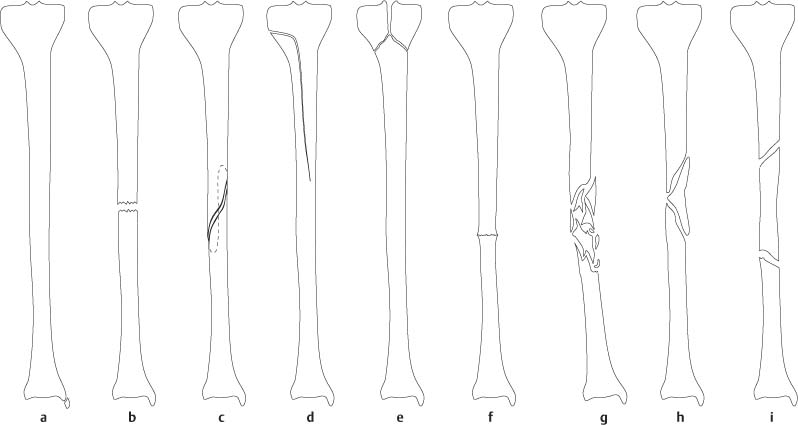 Fig. 4.4 Pseudarthrosis had developed 2 years after a fracture of the humerus that shows classical changes of Paget’s disease.

Fractures of the proximal humerus occur between one or all four major segments, which include the articular segment (anatomic neck fracture), the proximal humerus shaft (surgical neck fracture), the greater tuberosity and the lesser tuberosity. The modified Neer four-segment classification is based on the number of displaced segments. Any fracture that is not or only minimally (less than 1 cm) displaced and not or only minimally angulated (less than 45°) is disregarded. A one-part fracture may involve any or all four anatomic segments but there is no displacement or angulation between fracture fragments. A two-part fracture indicates that only one segment is displaced in relation to the three that remain undisplaced or are intact. A three-part fracture commonly consists of a displaced greater or lesser tuberosity fracture combined with a surgical neck fracture. A four-part fracture typically involves both greater and lesser tuberosity in addition to the surgical neck with displacement of all four segments. Two-part, three-part, and four-part fractures may be associated with either anterior or posterior dislocation. The involvement of the articular surface in an anterior fracture-dislocation is referred to as “head splitting” and in a posterior fracture-dislocation as “impression”.

Fractures of the distal radius include 1. Colles fracture (extra-articular, usually occurring about 2 to 3 cm from the articular surface with typically radial and dorsal displacement and angulation apex volar of the distal radius fracture fragment and frequent association of an ulnar styloid fracture). 2. Smith fracture (extra- or intra-articular fracture with volar displacement of the distal fragment). 3. Barton fracture (intra-articular oblique fracture of the dorsal distal radius) and 4. Hutchinson or chauffeur’s fracture (fracture of the radial styloid process) (Fig. 4.8). The scaphoid is the most commonly fractured carpal bone. The fracture may be located in the distal pole (5%), tubercle (5%), waist (75%) or proximal pole (15%) (Fig. 4.9). Common complications of a scaphoid waist fracture include nonunion and avascular necrosis of the proximal fracture fragment. 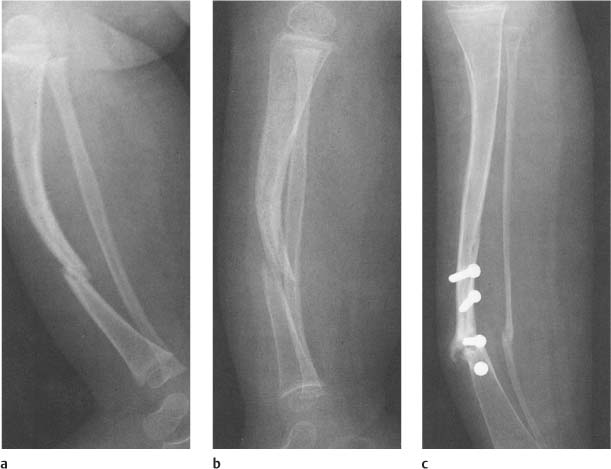 Fig. 4.5 Nonunion and pseudarthrosis formation in neurofibromatosis. a A fracture is seen in the tibia that shows anterior bowing. b Six months after a. Periosteal callus formation and bone resorption occurred around the fracture fragments, but the fracture has not healed (nonunion). c Five years after a. Despite various conservative and surgical treatment attempts, the fracture has not healed, and a pseudarthrosis has formed. Note also the bowing and narrowing (overconstriction) of the fibula (characteristic of neurofibromatosis) in which a healed fracture is now seen. 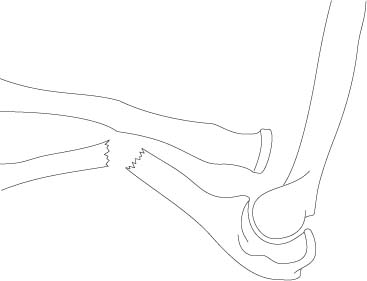 Fig. 4.6 Monteggia fracture (type 1). Fracture of the proximal ulnar shaft with anterior angulation at the apex and anterior dislocation of the radial head is seen.

Fig. 4.7 Galleazzi fracture. Fracture of the distal radius with angulation apex medial and dorsal and posteromedial dislocation of the ulna in the distal radioulnar joint is diagnostic. The radius fracture fragments may also overlap. 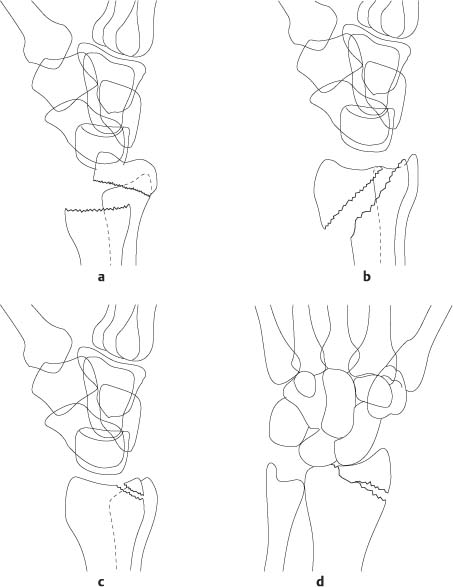 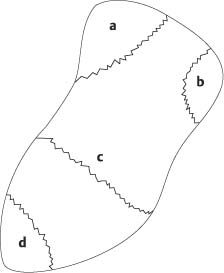 Intra-articular fractures of the base of the first metacarpal may be simple (Bennett fracture) (Fig. 4.12) or comminuted (Rolando fracture). In these conditions the first metacarpal is frequently dorsally and radially dislocated or displaced, respectively, caused by the pull of the abductor pollicis longus. A boxer’s fracture involves the neck of a metacarpal (most commonly the fifth) with characteristic dorsal angulation at the apex. A gamekeeper’s thumb (skier’s thumb) (Fig. 4.13) results from rupture of the ulnar collateral ligament of the first metacarpophalangeal joint that may be accompanied by the fracture of the base of the proximal phalanx. 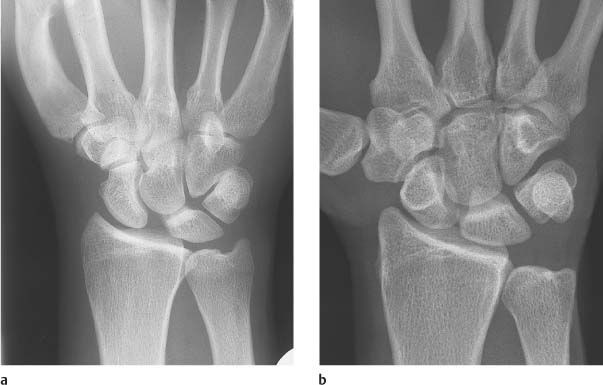 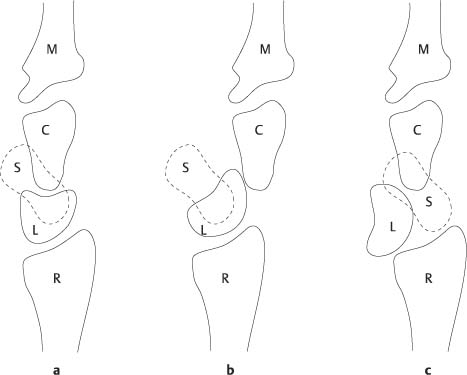 In the pelvis stable and unstable fractures must be differentiated (Figs. 4.14 and 4.15). In unstable fractures the pelvic ring formed by the sacrum and pelvis is totally disrupted in two or more places. Stable pelvic fractures include avulsion injuries (anterosuperior and anteroinferior iliac spines and ischial tuberosity) and/or complete disruption of the pelvic ring limited to a single location. Pelvic fractures may extend into the acetabulum where involvement of the dome (acetabular roof), anterior (iliopubic) wall or column and posterior (ilioischial) wall or column must be differentiated.

Fractures of the proximal femur may be classified as capital, subcapital, midcervical, basicervical, intertrochanteric and subtrochanteric (Fig. 4.16). Capital fractures are uncommon and usually associated with posterior hip dislocation. After healing they may be impossible to differentiate from avascular necrosis of the femoral head. Frequent complications of displaced femoral neck fractures are avascular necrosis of the femoral head and nonunion.

Fractures about the knee may involve the distal femur or the proximal tibia. Distal femur fractures may be extra-articular (supracondylar) or intra-articular (condylar or intercondylar). Fractures of the proximal tibia may involve, besides the intercondylar eminence, the lateral or, less frequently, the medial tibia plateau or both. The articular surface of the tibia plateau may be split, depressed or both. Cruciate ligament injuries are frequently associated with fractures extending into the intercondylar eminence of the tibia. A Segond fracture is an avulsion fracture of the lateral proximal tibia just distal to the joint line at the insertion of the reinforced capsule. This fracture has to be differentiated from an avulsion of Gerdy’s tubercle (insertion of the iliotibial tract) that is located anterior to the Segond fracture and usually only visualized on an external oblique but not on a frontal radiograph.

Fig. 4.12 Bennett fracture. A simple intra-articular fracture (arrow) of the base of the first metacarpal with radial subluxation of the latter is seen.

Fig. 4.13 Gamekeeper’s (skier’s) thumb. A tiny avulsion fracture (arrow) of the ulnar aspect of the proximal phalanx of the thumb is seen. 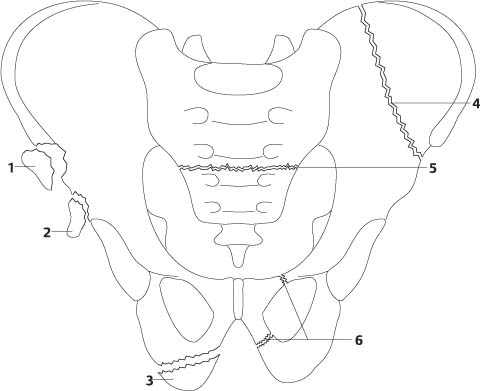 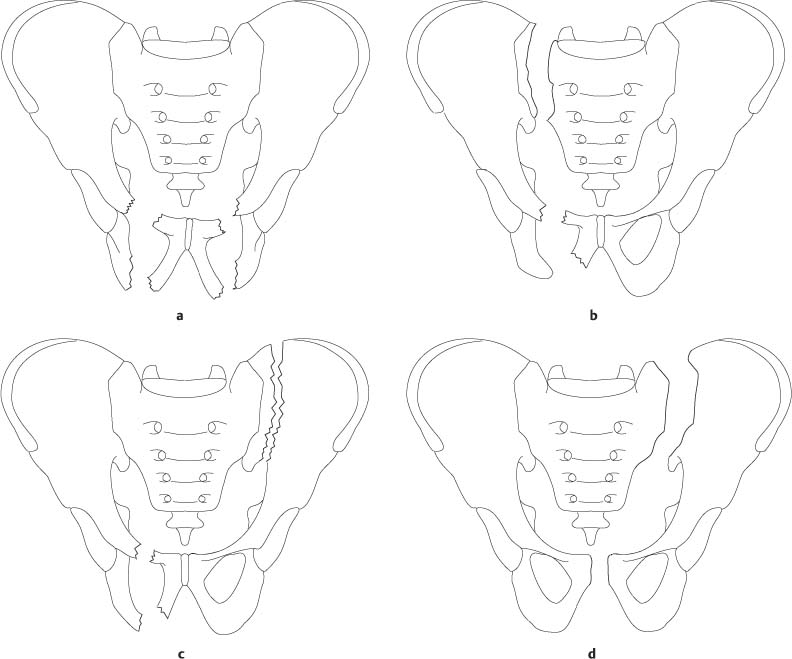 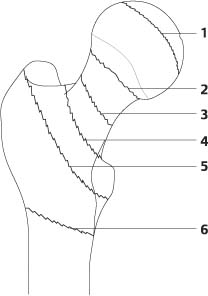 Fractures of the ankle can be classified as unimalleolar, bimalleolar, trimalleolar or complex (comminuted fracture of the distal tibia and fibula). A fracture of the distal tibia caused by axial load is called pilon fracture when the fracture line extends into the articular surface of the distal tibia, the tibia plafond. Injuries of the ankle are commonly caused by inversion (supination, adduction) or eversion (pronation, abduction) of the foot and may be associated with external (lateral) rotation of the foot. These injuries may be ligamentous, osseous, or both. Depending on their radiographic presentation (Fig. 4.17) both mechanism and severity of the injury can be assessed. Osteochondral fractures of the lateral or less commonly the medial talar dome may be associated resulting from impingement of the talus on the fibula or tibia, respectively.

Fibular shaft fractures may be associated with ankle injuries. A Dupuytren fracture consists of a distal fibular fracture 2 to 7 cm above the ankle joint line associated with disruption of the distal tibiofibular syndesmosis and the medial collateral (deltoid) ligament. The same injury without disruption of the distal tibiofibular syndesmosis is termed Pott fracture. A Maisonneuve fracture (Fig. 4.18