Clavicles, ribs, and sternum are usually seen on the same plain films and will therefore be dealt with in the same chapter, although anatomically clavicles are part of the upper extremity. Many of the roentgenographic findings are incidental, seen in chest roentgenograms. In these high KVp exposures, bone details in the ribs and sternum are poorly visualized. Special views with lower KVp and better contrast are taken in the presence of local pain, a history of trauma, or a palpable lesion. The costal cartilage is not visualized unless calcification has taken place. Costal cartilage calcification is more common in females and tends to be central, whereas peripheral calcifications predominate in males.

Rib deformities occur in 2.8% of the population. The socalled cervical rib may be a supernumerary rib originating from the lowermost cervical segment. An asymmetrically developed hypoplastic first thoracic rib may mimic a cervical rib. A true cervical rib is usually an asymptomatic incidental finding. It may occasionally compress the subclavian artery or brachial plexus. Congenitally bifid, spurred, widened, or fused ribs are relatively common variants (Fig. 13.1). It may be a manifestation of the rare basal cell nevus syndrome (Gorlin’s syndrome), which consists of a combination of multiple basal cell epitheliomas, odontogenic cysts, brachydactyly, rib anomalies, scoliosis with vertebral anomalies, extensive calcification of the falx cerebri, and multiple calcified mesenteric cysts.

Hypoplasia or absence of a rib is relatively common at Tl or T12. Eleven pairs of ribs are more common among females than males, and frequent among Down’s syndrome.

A regenerated rib after resection (if periosteum is leaved intact) is usually thinner, shorter, and not as smoothly outlined as the original. In neurofibromatosis, ribs may be thin due to hypoplasia. Intercostal neurofibromas cause superior and inferior erosions (ribbon rib; Fig. 13.3). Thinned or “ribbon” ribs may be a feature in hyperparathyroidism, due to subperiosteal bone resorption, osteogenesis imperfecta, severe osteoporosis, long-standing paraplegia (poliomyelitis), rheumatoid arthritis, scleroderma, trisomy 12–15 and trisomy 17–18 syndromes, as well as in a number of rare osteochondrodysplasias. 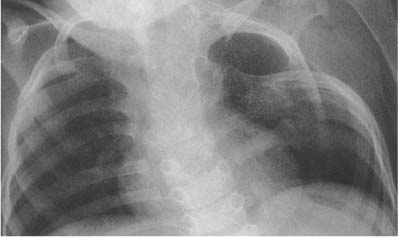 Fig. 13.1 Bilateral rib fusions and vertebral anomalies cause severe deformity of the chest. 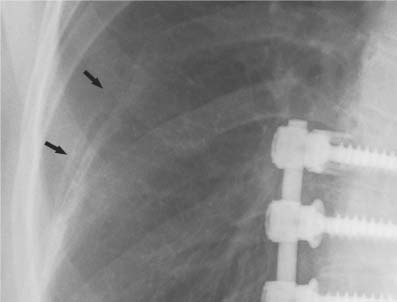 Fig. 13.2 Regenerated rib. 7th rib on the right was removed because of skoliosis treatment. A regenerated rib is present two years after operation. 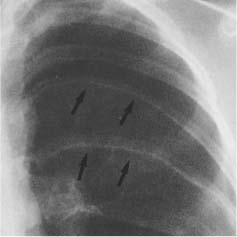 Fig. 13.3 Neurofibromatosis. Hypoplastic ribs 5 and 6 on the left show inferior erosions (arrows). They are caused by intercostal neurinomas.

Several congenital conditions cause rib deformities as a reflection of generalized bone involvement.

In achondroplasia (Fig. 13.4), the ribs are wide, markedly shortened, and they do not extend normally around the chest. Among the mucopolysaccharidoses, rib widening is common (Fig. 13.5). In type IV (Morquio’s syndrome), the ribs may have thinned posterior portions (Fig. 13.6). Rib changes similar to mucopolysaccharidoses are present also in various mucolipidoses (a congenital group of disorders in which excess material is stored in lysosomes and the clinical and radiologic findings resemble mucopolysaccharidoses). Patchy osteoporosis mimicking metastatic disease combined with rib widening may be present in Gaucher’s disease and Niemann–Pick disease. Rib widening may be a feature in several other rare osteochondrodysplasias as well.

In osteopetrosis (Albers-Schonberg disease), the ribs and clavicles are uniformly dense (Fig. 12.71a). The sternal ends may be widened. Uniformly dense ribs are commonly caused by osteoblastic metastases, myelofibrosis, or Hodgkin lymphoma (see Chapter 2).

Anterior bulbous widenings and a coarse trabecular pattern are characteristic rib changes in thalassemia. Coarse trabeculation with cortical widening may also be seen in sickle cell anemia and polycythemia.

Cupping and widening of the sternal ends of ribs are characteristic of rickets (Fig. 13.7). Bulging, somewhat widened costochondral junctions are also seen in scurvy. In Caffey’s infantile cortical hyperostosis, periosteal thickening and subperiosteal new bone formation are most frequently found in clavicles and ribs. The condition is accompanied by fever, soft-tissue swelling, and generalized symptoms of inflammation. Periosteal new bone formation in ribs also occurs in leukemia, especially in childhood. 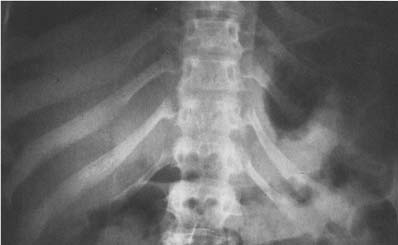 Fig. 13.4 Achondroplasia. The ribs are wide and short. 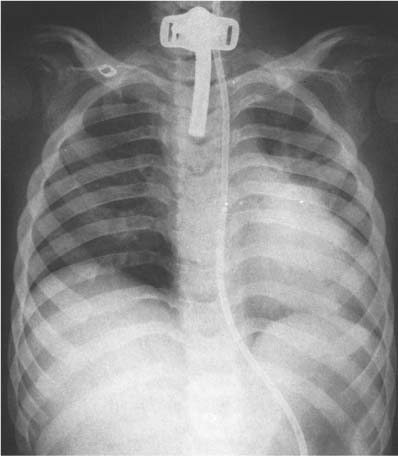 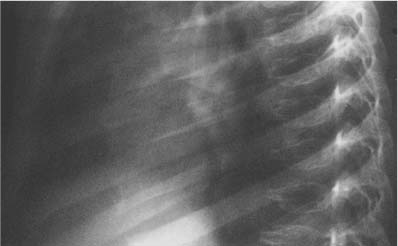 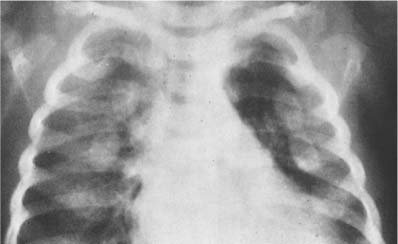 Localized expansile lesions of the ribs occur most frequently due to fibrocystic lesions, e.g., fibrous dysplasia (Fig. 13.8), bone cyst (Fig. 13.9) or nonossifying fibroma (see Chapter 5). Expansion may also be due to enchondroma (Fig. 13.10), osteochondroma (exostosis) (Fig. 13.11), expansile metastasis, myeloma (Fig. 13.12), other neoplastic diseases, as well as a brown tumor of hyperparathyroidism, Langerhans cell histiocytosis (eosinophilic granuloma), fracture with extensive callus, and osteomyelitis (see Chapter 5). Cartilaginous expansion in Tietze’s syndrome may occasionally cause expansion of the anterior end of the rib, but usually there is no associated bone abnormality. Long (> 6 cm) solitary expansile lesions are encountered in sarcomatous tumors (osteosarcoma, chondrosarcoma, Ewing’s sarcoma, Askin tumor is uncommon tumor of intercostals nerve.), fibrous dysplasia, metastases, and plasmocytoma or myeloma, but rarely in other bone tumors or in Paget’s disease. 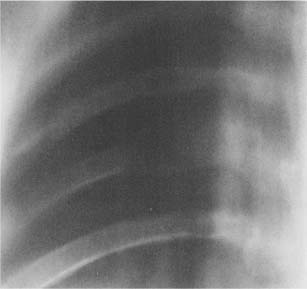