• This is a systemic disease; consider obtaining magnetic resonance imaging (MRI) of the asymptomatic contralateral hip. MRI can identify early-stage femoral head osteonecrosis that may be amenable to nonarthroplasty and nonsurgical treatments. Patients are immunodeficient (owing to functional asplenia) and have a high rate of pyogenic infection. Additionally, a multidisciplinary care plan must be instituted to coordinate all of the involved disciplines, including hematology, infectious disease, cardiology, pain management, rehabilitation medicine, and anesthesiology.

• Characteristic changes in the osseous architecture of the symptomatic hip have been observed. The proximal femur may have areas of sclerosis and even complete canal obliteration secondary to osseous infarction. Marrow hyperplasia may lead to widening of the metaphyseal medullary canal and thinning of the trabeculae and cortices. The femoral head is usually flattened with significant subchondral collapse. Acetabular protrusio is also common. All of these may necessitate special considerations for implant selection and alteration in surgical technique to optimize fixation and biomechanics, and to avoid complications during surgery.

• The perioperative management plan is modified in four core areas: (1) Monitor fluid resuscitation and oxygenation to prevent a sickling crisis, cardiac fluid overload, and acute chest syndrome; (2) consider extended administration of antibiotics, and assess sources of infection such as ipsilateral extremity venous stasis ulcers. It is recommended to obtain intraoperative cultures and histopathology to rule out hip joint infection; (3) optimize hemostasis to minimize wound drainage, hematoma formation, and other bleeding complications that may increase the need for blood transfusion in a patient population at risk for alloimmunization and blood transfusion reaction; and (4) provide pain management with consideration for epidural analgesia and regional nerve blocks because almost all of these patients have a narcotic tolerance owing to long-term narcotic use to manage painful sickle crises. On occasion, consideration should be given to prevention of sickling and subsequent crises with a trial of temporary sympathectomy.

• Discuss potential technical challenges, higher risks of complications, and reduced prosthesis survivorship with these patients. Likewise, the potential for articular surface wear is increased because most of these patients are young and active.

Sickle cell disease is a hematological disorder characterized by deformation of red blood cells into an abnormal, rigid, and sickled shape (Fig. 83-1). Sickling decreases erythrocyte flexibility, leading to a variety of complications; it occurs because of a mutation in the hemoglobin gene. Sickle cell disease is relatively common in populations inhabiting tropical and subtropical regions of the world. One third of all indigenous inhabitants of sub-Saharan Africa carry the gene. An interesting clinical relationship has been noted between sickle cell disease and malaria; those with only one of the two gene alleles for sickle cell disease are more resistant to malaria because affected red cells are more resistant to infestation by the malaria Plasmodium. 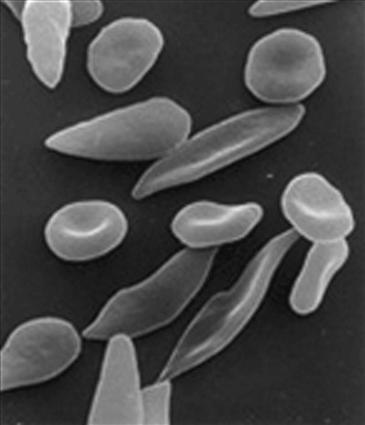 Sickle cell syndrome encompasses a wide spectrum of clinical manifestations depending on the number and type of gene mutations. Sickle cell anemia represents a specific form of sickle cell disease. Patients are homozygous for the gene mutation resulting in hemoglobin S, hence sickle cell anemia is also referred to in the medical literature as HbSS, SS disease, or hemoglobin S. Patients with a heterozygous gene pattern (one sickle gene and one normal gene) are referred to as HbAS or sickle cell trait. Other less common forms of sickle cell syndrome include sickle–hemoglobin C disease (HbSC), sickle beta-plus-thalassemia (HbS/β+), and sickle beta-zero-thalassemia (HbS/β0). These other forms of sickle cell disease are compound heterozygous patterns in which the patient has only one copy of the mutation that causes HbS and one copy of another abnormal hemoglobin allele.

Heterozygous patients are often asymptomatic. Homozygous patients have severe anemia, recurrent painful crises, pyogenic infections, and chronic end-organ necrosis and infarction (e.g., splenic, osseous). A wide range in the prevalence of osteonecrosis of the femoral head has been reported in the literature, and it is dependent upon the sickle cell genotype: The prevalence of osteonecrosis was greatest in the group with in Sβ0 genotype (13.1 percent), followed by those with the hemoglobin SS genotype (10.2 percent), those with the hemoglobin SC genotype (8.8 percent), and patients with the Sβ+ genotype (5.8 percent).1–3 Femoral head osteonecrosis develops before the age of 35 years in nearly half of all patients with HbSS.4,5 Bilateral hip involvement is seen in 40% to 91% of patients.6–9 Historically, life expectancy was often shortened10 because of the many complications; however, advances in medical therapy have improved life expectancy. This has led to an increasing number of patients in need of medical and surgical management of femoral head osteonecrosis. Primary total hip arthroplasty (THA) in patients with sickle cell disease requires an understanding of the musculoskeletal manifestations associated with sickle cell disease, as well as the variety of medical problems that may complicate the perioperative and postoperative periods and compromise the clinical outcome.

Treatment of precollapse femoral head osteonecrosis includes physical therapy, statins, bisphosphonates, core decompression, and bone grafting with or without growth factors.11 Some surgeons have performed total hip resurfacing in appropriate patients.12,13 Patients with sickle cell disease and end-stage femoral head osteonecrosis are indicated for THA when other treatments are no longer effective. Absolute contraindications include active infection and severe medical problems that are not optimized. Primary resection arthroplasty and hip fusion generally are not desirable in this patient population owing to young age, bilaterality of hip disease, and difficulty in achieving fusion in necrotic bone. Femoral osteotomy is associated with a poor outcome because it does not alter disease progression.14 Hemiarthroplasty is not indicated because of abnormal acetabular bone stock and/or the presence of protrusio.

The decision of what surgical option to undertake is based upon the stage of femoral head osteonecrosis. Multiple staging systems have been proposed to describe the changes and evolution of osteonecrosis of the hip.15 The three most commonly used are the Ficat and Arlet,16 University of Pennsylvania (Steinberg),17 and Association Research Circulation Osseous (ARCO)18 classification systems (Tables 83-1 through 83-3). Regardless of the classification system used, evaluation of the radiograph and of MRI images should be based on the size of the lesion and the presence of sclerosis or cysts, crescent sign, head depression, and/or collapse, as well as acetabular changes. McGrory and associates19 recently reported on current practices of members of the American Association of Hip and Knee Surgeons (AAHKS) in treating adults with femoral head osteonecrosis. Total hip arthroplasty was reported to be the most frequent intervention for treatment of postcollapse (Steinberg stage III, IV, V, and VI) osteonecrosis. Core decompression was reported to be the most commonly offered intervention for symptomatic precollapse (Steinberg stages I and II) osteonecrosis. Less common treatments included nonoperative management, osteotomy, vascularized and nonvascularized bone grafting, hemiarthroplasty, and arthrodesis.

Efforts are being made to evaluate surgical treatment options with the specific goal of preventing progression of femoral head collapse in hips with moderate disease (stage II). Multiple studies have provided evidence supporting the use of core decompression for stages I and II.20–22 However, Moran23 has suggested that core decompression will not work as well in sickle cell patients because it does not address the primary underlying pathology of vaso-occlusion. In addition, many of these patients already have advanced head collapse upon initial presentation for evaluation. Marker and colleagues24 reviewed the literature for early-stage femoral head osteonecrosis. They recommended following the treatment algorithm proposed by Seyler and coworkers25 (Fig. 83-2). 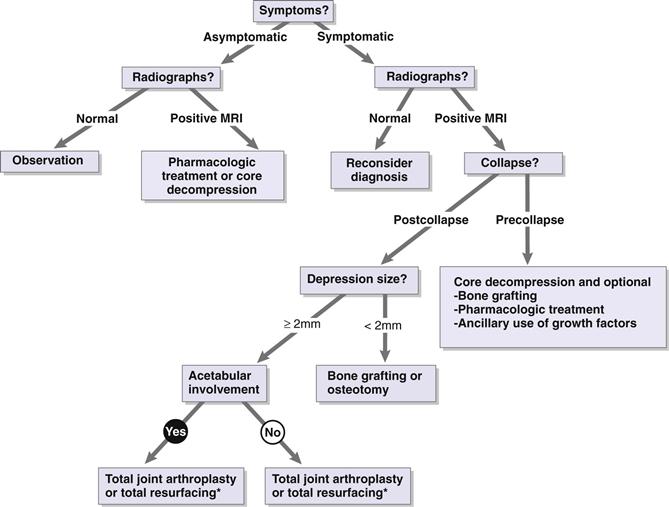 Figure 83-2 Treatment for osteonecrosis of the hip should be determined on the basis of both clinical and radiographic assessments. *Hip resurfacing remains an option in selected patients, in particular those with extra-articular deformity of the upper femur. However, many patients with hemoglobinopathy also have renal dysfunction, which would preclude the use of metal-on-metal articulation. Moreover, metal-on-metal articulation such as that seen in hip resurfacing is contraindicated in women of childbearing age. MRI, Magnetic resonance imaging. (Redrawn from Seyler TM, Marker D, Mont MA: Osteonecrosis. In Klippel JH, Stone JH, Crofford LJ, White PH [eds]: Primer on the rheumatic diseases, ed 13, New York, 2008, Springer, p 571.)

The clinical assessment should include level of pain, functional limitation, history of nonsurgical management, prior infections, prior surgeries, and overall medical status. The clinical examination should include range of motion of the hip, specifically noting contractures, the presence/location of prior incisions and wounds, measurement of limb lengths, and checking for vascular insufficiency and ulcerations of the legs. Attention must be paid to the contralateral hip because many patients have bilateral hip disease.

Radiographic assessment should include evaluation of acetabular protrusion and coverage of the femoral head, canal sclerosis, previous core decompression tract (with or without bone grafting), canal geometry, and any pelvic obliquity. Hernigou and coworkers8 have outlined the radiographic features of 52 patients (95 hips) with sickle cell disease. They noted that pathologic changes differed from those observed in patients with femoral head osteonecrosis secondary to other causes. Using standard radiographic images of the hip (Fig. 83-3), the authors noted that osteochondritis dissecans was less common than in non–sickle cell disease patients. Coxa plana was more common, with premature growth plate closure resulting in a short femoral neck without significant alteration in the neck shaft angle. However, if premature closure of only the medial portion of the physis occurred, this would lead to widening of the femoral neck and varus deformity. Protrusio acetabuli29 was also more common in sickle cell disease patients. It is important to note that the proximal femur may have areas of sclerosis and frank canal obliteration secondary to repeated bone infarctions. Conversely, marrow hyperplasia may lead to widening of the metaphyseal medullary canal and thinning of the trabeculae and cortices, which may predispose to fracture during surgical preparation and insertion of the implant. 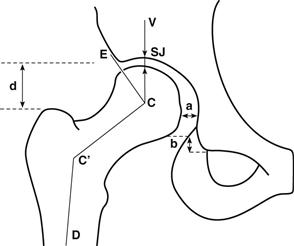 Figure 83-3 Drawing showing the radiographic indices of the hip. Lateral subluxation (a) was considered to be present when the distance (a) was greater than 10 mm. Superior subluxation (b) was measured by the step-off in the Shenton line, by projecting the inferior surface of the femoral neck and relating it to the obturator foramen. Because femoral rotation may alter this measurement, only a break greater than 5 mm was considered abnormal. The center angle of Wiberg (formed by VCE) was considered insufficient when it measured less than 20 degrees. The articulotrochanteric distance (d) was determined by measurement of the distance between the proximal pole of the femoral head and the top of the trochanter. The superior joint space (SJ) was measured on a vertical line at 90 degrees from the horizontal line drawn between the inferior aspects of the teardrops of both hips. The neck shaft angle is formed by CC’D. The average value is 123 degrees, and the standard deviation is 7 degrees. (Redrawn from Hernigou P, Galacteros F, Bachir D, Goutallier D: Deformities of the hip in adults who have sickle cell disease and had avascular necrosis in childhood. J Bone Joint Surg Am 73:81–92, 1991.)