• Revision THA: Classifying femoral bone defects is a critical part of the preoperative planning required for a successful revision THA.

• Classification: Classifying femoral bone defects is a critical part of the preoperative planning required for a successful revision THA. Paprosky, Mallory, the American Academy of Orthopaedic Surgeons, Endo-Klink, Saleh and coworkers, Engh and Glassman, Gustillo and Pasternak, and Chandler and Penenberg have all published classification systems that differ in their complexity and descriptive terms; however, there remains no consensus as to which classification system should be used when bone loss is assessed in the face of revision THA.

• Treatment options: Femoral bone loss can be extensive, making it difficult to obtain adequate support of the femoral component at the time of revision surgery. As a result, these bone defects can adversely affect the long-term fixation and survivorship of the revised femoral implant.

• Reliability: A useful classification system for femoral bone loss associated with a failed THA should be both reliable and valid. Reliability refers to both interobserver reliability, the agreement between different observers, and intraobserver reliability, the agreement of one observer on separate occasions. Validity indicates the accuracy with which the classification system describes the true pathology.

Failure of a primary total hip arthroplasty (THA) typically occurs with varying degrees of femoral bone loss. This bone loss can be the result of osteolysis, mechanical loosening, infection, or stress shielding. Regardless of the underlying cause, femoral bone loss can be extensive, making it difficult to obtain adequate support of the femoral component at the time of revision surgery. As a result, these bone defects can adversely affect the long-term fixation and survivorship of the revised femoral implant.

Classifying femoral bone defects is a critical part of the preoperative planning required for a successful revision THA. A classification system that estimates the pattern and degree of bone loss can aid the surgeon in determining the operative plan. The classification system can predict the complexity of the surgery and can provide an algorithmic approach to reconstruction of the femoral deficiency in revision THA. This is necessary to determine which implants, instruments, and bone grafts will be required to be available at the time of revision surgery. Because various reconstructive options are available to revise a failed femoral component, a classification system also allows the uniform comparison of published outcomes of these different reconstructive techniques.

The Paprosky classification for femoral bone loss is commonly used in North America and Europe and attempts to group the revision femur into one of four types based on the integrity of the metaphysis, the remaining isthmic bone and the quality of the host cortices (Table 93-1).8–10 This classification system is based on the ability of the reconstruction to bypass the compromised proximal femur and attain osteointegration of an extensively coated femoral implant in the femoral diaphysis. In addition to classifying femoral defects, this system provides an algorithmic approach to reconstruction of femoral deficiency in revision total hip arthroplasty (THA).

In a type I defect, there is minimal loss of metaphyseal cancellous bone with an intact femoral diaphysis. This type of bone defect is not common. It is usually seen with a failed cementless, smooth implant such as a failed Austin-Moore prosthesis (Fig. 93-1). Revision THA is relatively straightforward, and the intact metaphyseal bone allows the use of a cemented or cementless femoral implant. However, inferior results have been reported after revision using a cemented or proximally porous-coated primary hip stem.11 If a cemented stem is used for the revision, careful canal preparation and removal of the neocortex are mandatory to achieve cement interdigitation and long-term success.11 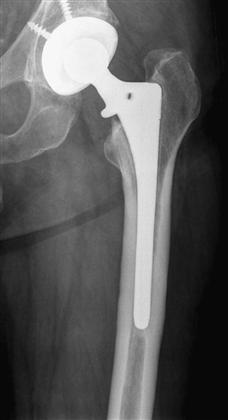 Figure 93-1 An anteroposterior radiograph of a loose cementless femoral component illustrating a type I defect. Minimal loss of the metaphyseal cancellous bone occurs with an intact femoral diaphysis.

Type II defects are among the more common types of deficiencies. In a type II defect, extensive loss of metaphyseal bone is seen with a completely intact femoral diaphysis. This type of defect is often present after the removal of loose cemented femoral component or in the early stage of loosening of a cementless femoral implant (Fig. 93-2). The deficient metaphyseal cancellous bone precludes revision with a cemented stem. Because the metaphysis remains somewhat supportive, a proximally porous-coated cementless implant with diaphyseal stabilization or an extensively porous-coated implant with distal fixation can be used to revise the failed THA. Type II defects can be associated with varus remodeling of the proximal femur. In these cases, an extended trochanteric osteotomy and a diaphyseal filling implant are required.

Figure 93-2 An anteroposterior radiograph of a loose cemented femoral endoprosthesis illustrating a type II defect. Extensive loss of the metaphyseal bone is noted with a completely intact femoral diaphysis.

Type III defects are subdivided depending on the amount of intact diaphyseal bone available for distal fixation. In type IIIA defects, the femoral metaphysis is severely damaged and nonsupportive, but at least 4 cm of intact cortical bone is present in the femoral diaphysis (Fig. 93-3). At least 4 cm of intact diaphyseal bone is required to have sufficient implant-cortical contact to achieve initial stability and long-term osteointegration.12 In these cases, revision with an extensively porous-coated femoral implant is used to achieve fixation in the diaphysis. Eight-inch stems are most frequently utilized, but their use can be complicated by perforation of the anterior femoral cortex at the level of the anterior femoral bow. The risk of femoral perforation can be minimized with the use of curved femoral implants. Another reconstructive technique for type IIIA defects is impaction grafting.8,13-19 Type IIIA defects can be associated with torsional remodeling of the proximal femur into retroversion. In these cases, a modular tapered stem can be used because it allows independent filling of proximal and distal portions of the femur while allowing independent rotation of the two segments to correct the femoral anteversion. Type IIIA defects are frequently associated with varus femoral remodeling that requires an extended trochanteric osteotomy at the time of revision surgery to ensure proper implant alignment and restoration of normal femoral alignment (Fig. 93-4).

Figure 93-3 An anteroposterior radiograph of a loose cemented femoral endoprosthesis illustrating a type IIIA defect. The femoral metaphysis is severely damaged and nonsupportive, but more than 4 cm of intact cortical bone is present in the femoral diaphysis distal to the failed implant.

Figure 93-4 An anteroposterior radiograph of a loose cementless femoral component that has migrated into varus. The severe varus femoral remodeling associated with this necessitates an extended trochanteric osteotomy at the time of revision surgery to ensure proper implant alignment.

Similar to type IIIA defects, type IIIB defects have a severely damaged metaphysis that is nonsupportive. However, in type IIIB defects, the intact diaphyseal cortical bone is less than 4 cm in length (Fig. 93-5). This type of femoral bone deficiency is commonly seen with revision of a failed long cemented stem with a distal plug and a long cement mantle or with cementless stems with substantial distal osteolysis. The short region of intact cortical bone in type IIIB defects does not tend to provide sufficient initial scratch fit and implant-bone contact to ensure implant stability and ingrowth. As a result, the use of extensively porous-coated stems in these defects has been associated with an unacceptably higher rate of fibrous stable fixation rather than bone ingrowth.1 Revision with a modular, tapered cementless stem is recommended for these defects.18,20 The tapered and fluted stem is able to attain excellent initial axial and rotational stability in the face of a very short region of intact isthmus. Modularity allows the impaction of the distal component until it is stable and then provides the ability to build up the proximal segment to restore leg lengths and offset. Impaction grafting also can be used to reconstruct type IIIB defects if the metaphysis is relatively intact with contained defects; if not, it can be reconstructed with mesh, strut grafts, or plates.

Figure 93-5 An anteroposterior radiograph of a loose cemented femoral component illustrating a type IIIB defect. The metaphysis is severely damaged and nonsupportive. The intact diaphyseal cortical bone distal to the failed stem is less than 4 cm in length.

In a type IV defect, extensive metaphyseal and diaphyseal damage is noted in conjunction with a widened femoral canal. In these rare cases, the isthmus is nonsupportive, and distal fixation cannot be achieved (Fig. 93-6). Revision with a modular, tapered cementless stem has demonstrated early and promising results for these defects.8,20 When the proximal femoral cortex is intact, impaction grafting can also be used to reconstruct the femur and restore bone stock. In low-demand elderly patients, a long cemented stem can be used occasionally to revise the loose THA. When the proximal femoral cortex is deficient, a femoral allograft-prosthesis composite can be used to reconstitute bone stock in younger patients, and a proximal femoral replacement can be used in older patients.21–24

Figure 93-6 An anteroposterior radiograph of a loose cemented femoral component illustrating a type IV defect. Extensive metaphyseal and diaphyseal damage is seen in conjunction with a widened femoral canal.

The Paprosky classification system is based on the ability of an extensively porous-coated femoral implant to bypass the compromised femur and attain fixation in the femoral diaphysis. Based on this classification, extensively porous-coated implants have demonstrated 96% survivorship in type II and type IIIA defects at 14-year follow-up.8,12 At the same follow-up, the rate of mechanical failure is reported at 21% for type IIIB or type IV defects.12 As a result, modular tapered cementless stems are now recommended for reconstruction of the severe femoral defects seen in Paprosky type IIIB and type IV femurs.

The Mallory classification is one of the earliest systems that attempts to classify femoral bone loss and provide a guide to treatment.2 This system describes femoral bone loss as varying degrees of expansive opening of the proximal femur and associated cortical thinning, medullary canal disintegration, and preservation of the femur distal to the failed implant or cement mantle. The classification system divides femoral bone loss into three types based on the integrity of the medullary contents of the femur and the integrity of the cortical bone (Table 93-2). In a type I defect, the cortex and medullary contents remain essentially intact. Loosening occurs only within the medullary canal and does not destroy the medullary canal or the cortical bone. This type of bone loss is frequently seen with a failed cemented THA that was poorly cemented and had a thin cement mantle that did not fill the entire metaphyseal cancellous bone. This type of bone defect can be treated with cemented or cementless femoral components following conventional parameters, similar to a primary THA.

In a type II defect, the medullary contents of the femur are essentially gone, but the cortical tube remains intact. This type of defect occurs after failure of a cemented femoral component in which the cement extended all the way to the metaphyseal cortex, or with femoral loosening and associated endosteal osteolysis that destroys all the cancellous bone. Because the proximal cancellous bone is deficient and the cortical tube is intact, reconstruction with distal fixation beyond the previous implant is recommended, and cemented implants are avoided in this type of defect.2

In type III defects, both the medullary contents and the cortical tube have been destroyed. The destruction of the cortical tube is then graded according to its extent. In type IIIA, cortical bone loss is seen proximal to the lesser trochanter, in type IIIB between the lesser trochanter and the isthmus, and in type IIIC to the isthmus and distal. Mallory recommended a femoral allograft-prosthesis composite to reconstruct and restore the bone stock in type IIIB and IIIC defects.2