Segmental instability and the stenotic concept

Although lumbar instability is considered to be responsible for the majority of chronic or recurrent backaches, the word ‘instability’ is still poorly defined. A number of different definitions exist, but as yet there are no clear and validated clinical features by which instability might be diagnosed. It is also not clear how instability as such might set up pain and disability.

It is generally accepted that instability does not cause trouble in itself, but predisposes to other conditions such as (recurrent) disc displacements, strain of the posterior ligaments and the zygapophyseal joints, and nerve root entrapment.

At the most simple level, instability is a lack of stability, a condition in which application of a small load causes an inordinately large, perhaps catastrophic displacement.1 This is also the description given by the American Academy of Orthopaedic Surgeons, who state: ‘Segmental instability is an abnormal response to applied loads, characterized by motion in motion segments beyond normal constraints.’2

A biomechanically more accurate definition of segmental instability, using a ‘neutral zone’ concept, has been proposed by Panjabi. The neutral zone concept is based on the observation that the total range of motion (ROM) of a spinal motion segment may be divided into two zones: a neutral zone and an elastic zone (Fig. 37.1).3 The neutral zone is the initial portion of the ROM during which spinal motion is produced against minimal internal resistance. The elastic portion of the ROM is the portion nearer to the end-range of movement that is produced against substantial internal resistance. Segmental instability is thus defined as a decrease in the capacity of the stabilizing system of the spine to maintain the spinal neutral zones within physiological limits in order to prevent neurological deficit, major deformity and/or incapacitating pain.4 This definition describes joints that, early in range and under minor loads, may exhibit excessive displacement.

Fig 37.1 In segmental instability, the stabilizing system is unable to maintain the spinal neutral zone (NZ) within physiological limits. ROM, range of motion.

The clinical definition of instability is: ‘a condition in which the clinical status of a patient with low back problems evolves, with the least provocation, from the mildly symptomatic to the severe episode’.5 Others consider instability to exist only when sudden aberrant motions such as a visible slip or catch are observed during active movements of the lumbar spine or when a change in the relative position of adjacent vertebrae is detected by palpation performed with the patient in a standing position versus palpation performed with the patient in a prone position.6

In order to be clinically useful, the structures that are responsible for instability must be specified. The stabilizing system of the spine can be conceptualized as consisting of passive (inert) and active (contractile) parts and a neural control system.

The passive subsystem consists primarily of the vertebral bodies, discs, zygapophyseal joints and joint capsules, and spinal ligaments. The passive subsystem plays its most important stabilizing role in the elastic zone of spinal ROM (i.e. near end-range),7 and numerous studies have been conducted that demonstrate the relative contributions of passive structures to segmental stability.

Injury to the inert stabilizing system may have important implications for spinal stability. Intervertebral disc degeneration, weakening of the posterior longitudinal ligaments and early degeneration of the facet joints may increase the size of the neutral zone, increasing demands on the contractile subsystem to avoid the development of segmental instability.3

The active subsystem of the spinal stabilizing system includes the spinal muscles and tendons and the thoracolumbar fascia; these contribute to stability in two ways. The first and lesser mechanism is to pull directly against the threatened displacement (which is, of course, not possible if the latter is a fragment of disc). The second, more important contribution is indirect: whenever the muscles contract, they exert compressive loads on the spine, which in turn achieves a stabilizing effect. In other words, by compressing joints in a neutral position, muscles may make it less easy for joints and discs to move.

During recent decades, a variety of studies have documented the stabilizing effect of muscles on the lumbar spine.15–18 The lumbar erector spinae muscle group provides most of the extensor force required for many lifting tasks.19 Rotation is produced primarily by the oblique abdominal muscles. The multifidus muscle seems to be able to exert some segmental control and is therefore proposed to function as a stabilizer during lifting and rotational movements of the lumbar spine.20 The role of the oblique abdominal and transversus abdominis muscles in spinal stability has been the subject of much debate. The abdominals have been thought to play a stabilizing role, either by increasing intra-abdominal pressure or by creating tension in the lumbodorsal fascia.21

The neural control system may also play an important part in stabilization of the spine. Panjabi describes the stability system as being composed of an inert spinal column, the spinal muscles and a control unit.22 In this model, changes in spinal balance resulting from position and load are monitored by transducers embedded in the ligaments that relay information to the control unit. When conditions that challenge spine stability are detected, the control unit activates the appropriate muscles to protect or restore stability, or to avoid instability. Evidence for this hypothesis is found in studies showing that patients with low back pain (LBP) often have persistent deficits in neuromuscular control.23,24 This hypothesis was further supported by a recent electromyographic study demonstrating that a primary reflex arc exists from mechanoreceptors in the supraspinous ligament to the multifidus muscles. Such a reflex arc could be triggered by application of loads to the isolated supraspinous ligament, which in turn initiates activity of the multifidus muscles at the level of ligament deformation, as well as one level above or below.25

The major categories of segmental instability are shown in Box 37.1.26 Tumours, infections and trauma are beyond controversy. They produce mechanical weakening of the anterior columns and can be diagnosed by medical imaging and by biopsy. Spondylolisthesis is a more controversial category. The condition is rarely progressive in teenagers or adults and can therefore be considered as stable in these age groups.27 However, it has been suggested that concurrent severe disc degeneration at the level of listhesis may lead to progression of slip and convert an asymptomatic and stable lesion into a symptomatic one.28

More difficulties arise with respect to so-called ‘degenerative instability’. The ageing of the lumbar spine has been discussed thoroughly (see Ch. 32). Grossly, it occurs in three sequential phases: dysfunction, instability and restabilization.29

During the early phase of degeneration (dysfunction), small annular tears and early nuclear degeneration appear in the disc, and ligamentous strains develop in the posterior ligaments and in the capsules of the zygapophyseal joints. The unstable phase includes reduction of disc height, gross morphological changes in the disc, and laxity of the spinal ligaments and facet joints. These changes lead to an increased and abnormal range of movement and to increased liability to disc displacements. During the restabilization phase, further physiological changes in the disc, such as increased collagen and decreased water content, together with the development of spinal osteophytes and gross osteoarthrosis of the zygapophyseal joints, result in increased stiffness of the spine and consequent stabilization (Fig. 37.2). 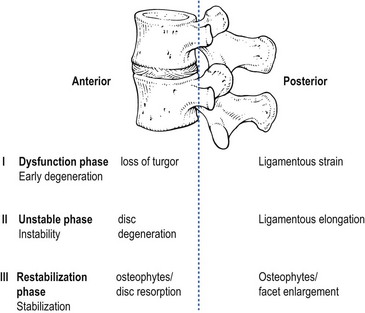 Fig 37.2 The three sequential phases in the degenerative process of the lumbar spine.

Biomechanical studies, both in vivo and in vitro, have confirmed this hypothesis: loss of stiffness, accompanied by annular tears or even nuclear disruption, has been reproduced in the laboratory by repetitive loading cycles which simulate normal human exposures.30 In other experiments, load applications to degenerative segments have revealed loss of stiffness, sometimes with quite dramatic results.31 However, difficulty remains in translating these anatomical and functional changes into clinical descriptions that could serve as a basis for diagnosis and treatment.

A further classification system for degenerative lumbar instability (Box 37.2), based on a combination of history and radiographic findings, has been proposed.32

• A primary instability is one where there has been no prior intervention or treatment which might account for the development of the process.

• A secondary instability involves surgical destruction of one or more of the restraining elements of the spine. Secondary instabilities may develop after discectomies,33 decompressive laminectomies, spinal fusions and chemonucleolysis.34

Rotational instability is still a hypothetical entity and so far normal radiological limits have not been identified.35

Translational instability is the most classic and best known of the primary degenerative instabilities. It is characterized by excessive anterior translation of a vertebra during flexion of the lumbar spine. At an early stage, it presents with disc space narrowing and traction spurs; later on, it represents degenerative spondylolisthesis. However, anterior translation is a normal component of flexion, and once again the difficulty that arises is setting a limit of normal translation. Many asymptomatic individuals exhibit anterior slips of more than 3 mm36; 4 mm of translation occurs in 20% of asymptomatic patients.37

Retrolisthesis develops when degeneration of the disc and the consequent decrease in disc height force the zygapophyseal joints into extension (see p. 442). Again, it has been shown that similar appearances occur in asymptomatic individuals.38 Therefore, the simple detection of retrolisthesis on a radiograph is not an operational criterion for instability.

Segmental instability is not painful in itself, and a patient with clear radiological signs of instability may be completely unaware of the condition. However, an unstable segment makes the spine more vulnerable to trauma; a forced and unguarded movement may be concentrated on the hypermobile segment and produce a posterior disc displacement. Repeated injuries may also lead to chronic irritation of posterior structures such as ligaments and zygapophyseal joints. An anterior or posterior shift of a vertebra may narrow the lateral recess to such a degree that the respective nerve roots become compressed.

Spinal instability is not a painful condition but may predispose to secondary lesions:

It can be postulated that a hypermobile segment may predispose to recurrent disc displacements, leading to recurrent or chronic discodural interactions. Pain arises not from instability of the segment itself but from the instability of a fragment of disc lying within it.

The typical history is usually that of recurrent back pain, which begins either suddenly or gradually, depending on the consistency of the shifted fragment (‘nuclear’ or ‘annular’) (see Ch. 33, Dural concept). There are bouts of backache a few times a year, and between the attacks the patient is fit and the back is painless. However, the slightest sudden movement or unaccustomed posture leads to a new discal shift, resulting in a renewed discodural interaction and pain.

It is obvious that, in this case, not only should treatment address reduction of the displaced fragment of disc, but also treatment of the instability should be undertaken.

Postural ligamentous pain appears when normal ligaments are subjected to abnormal mechanical stresses (see Ch. 34, Ligamentous concept). This may occur during the dysfunction stage: some loss of turgor in the disc and the decrease in intervertebral joint space cause some laxity of the segment and an increase of the neutral zone. The facet joints override, with the upper articular processes sliding downwards over the lower. The joints adopt the extension position and the posterior capsules become overstretched. As instability proceeds, more tension is imposed on the ligaments and the facet joint capsules, leading to more postural ligamentous pain.