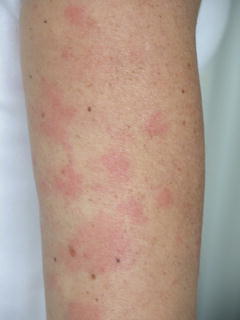 In the Muckle-Wells syndrome, the cutaneous rash may be present at birth, but a late onset is also described, even in the second or third decade of life. The skin manifestations may appear daily but also once or twice weekly or even less frequently. The rash is usually non-pruritic, even if some patients may define it as itchy. Conjunctivitis (Fig. 44.3), limb pain and acute arthritis (Fig. 44.4), and late-onset hearing loss are other associated features. Renal amyloidosis is the classical long-term complication [3]. 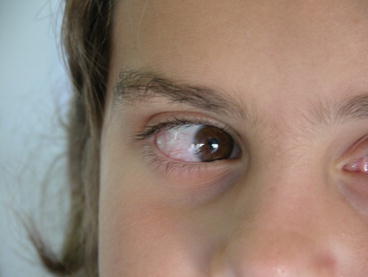 Conjunctivitis in an 8-year-old girl with Muckle-Wells syndrome 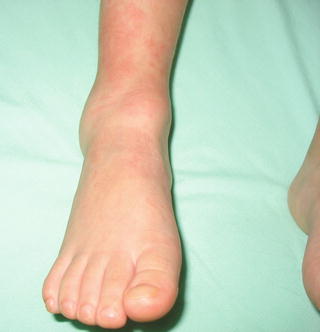 Swollen joint associated to urticarial rash in a 12-year-old girl with NOMID
In familial cold urticarial autoinflammatory (FCAS) syndrome, the skin rash is typically associated to the exposure of the whole body to cold [4]. Typically, also the parts not directly exposed to the cold present the skin rash after a mean of 2 h after cold exposure for a duration of approximately 12 h. Fever, limb pain, conjunctivitis, and elevation of acute phase reactants are usually associated with skin eruption.
FCAS, Muckle-Wells syndrome, and chronic CINCA represent the clinical spectrum of a syndrome associated with mutations of NLRP3 gene, coding for cryopyrin [5], and gathered under the term of cryopyrin-associated periodic syndromes (CAPS). Cryopyrin is a member of NOD-like receptor protein family. In the presence of a number of stimuli, cryopyrin oligomerizes and binds the adaptor protein ASC. This association activates directly two molecules of Caspase-1 which, in turn converts pro-IL-1β to the mature, active 17 kDa form. Mutations in the cryopyrin gene in humans are associated with its gain of function that lead to an excessive and faster production of IL-1β. Treatment with IL-1 blockers dramatically controls disease activity.

Other autoinflammatory diseases are characterized by a wide range of skin manifestations. An urticarial rash can be present during fever attacks observed in hyper IgD syndrome (or mevalonate kinase deficiency) or TNF receptor–associated periodic syndrome (TRAPS). As for FCAS, in these two diseases, the skin rash is observed only during the fever attacks, but is not induced by cold exposure. Moreover, while urticarial rash represents a constant manifestation in CAPS, its appearance in other autoinflammatory diseases is much more sporadic [6].
Mutations of NLRP12 gene are associated to a clinical phenotype similar to FCAS, with episodes of urticarial rash and arthralgia after cold exposure [7].
In Schnitzler syndrome an urticarial rash is combined with a monoclonal IgM gammopathy. The first symptoms usually start at the age of 50, and it seems to be an acquired disorder. Apart from intermittent attacks of fever, the clinical manifestations are bone and muscle pain, arthralgia or arthritis, and lymphadenopathy [8]. A lymphoproliferative disease cannot be detected. The pathogenesis and the part played by IgM are unknown.
Due to the presence of a skin rash, fever, arthritis, and persistent elevation of acute phase reactants, systemic-onset juvenile idiopathic arthritis and adult Still’s disease may enter into differential diagnosis with CAPS. The skin rash of these two latter conditions is characterized by a salmon-like evanescent eruption to the arms and trunk that characteristically coincides with fever peaks [8].
Chronic urticaria represents an important differential diagnosis for CAPS. Chronic urticaria has no obvious cause, although some factors (e.g., drugs, infections, emotional stress, and food) can serve as eliciting stimuli. An autoimmune origin caused by the presence of autoantibodies to FceRIa or to IgE itself can be identified in some patients. The primary lesion is a wheal characterized by a transient edema of the papillary dermis and which appears as a circumscribed cutaneous elevation with elastic consistency, pink or pale in color, and a variable erythematous surrounding flare. Usually the distribution on the body surface is usually random and asymmetric. Individual wheals last no longer than 24–36 h, and the lesions disappear without leaving skin marks. Wheals are typically pruritic or, in rare instances, are associated with a burning sensation. In about 40 % of patients, urticaria is associated with angioedema, which is determined by transient swelling of the reticular dermis and/or subcutaneous tissue. No other symptoms (e.g., fever, arthralgia, or muscular pain) are present.
Only gold members can continue reading. Log In or Register to continue