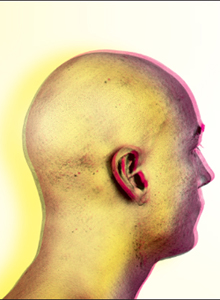 Chinese scalp acupuncture is not an actual somatope. The Chinese have rather described certain reflex zones on the scalp from which specific influence can be brought to bear on motor and sensory disturbances.

In Europe, Chinese scalp acupuncture is very closely associated with the name Zeitler.

This late colleague of the Viennese School rendered outstanding services in the development of this method.

Location: Connecting line between GB-7 and du mai20 (GV-20). This zone is the most occipital.

Location: The zone adjoins the Sensibility Zone in the direction of the nose at a distance of 1 cm and runs parallel to this.

The lower extremity, the trunk, as well as the bladder and rectum are located in the area of the upper fifth. As a rule, treatment is contralateral. Where assignment is unclear, acupuncture is performed bilaterally (e.g. bladder).

The second fifth corresponds to the treatment zone for the upper extremity.

The hand and finger are represented in the third fifth.

Trigger points for motor disturbances in the region of the facial musculature are frequently found in the fourth and fifth fifth of the Motor Zone. Swallowing and chewing complaints can also be treated via this projection zone.

Location: The zone adjoins the Motor Zone in the direction of the nose at a distance of 1 cm and runs parallel to this.

Indication: Tremor in the context of Parkinson disease

Indication: Adjuvant treatment of hypertension is possible via this zone. Treatment of edema in the case of cerebral pareses is also described.

Location: The line is roughly 4 cm long and approx. 2 cm above the apex of the ear.

Indication: As part of the treatment of sensory aphasia.

Location: In the region of the parietal tubercle. Thezone is roughly shaped like an isosceles triangle with sides approx. 3 cm long.

Four further zones may be distinguished in the direction of the occiput.

Sensomotor Zone of the Lower Extremity (8)

Location: Parallel to the median line (connecting line between EX-HN-3 and GV-16). Starting from the center of this line extending approx. 3 cm in the direction of the occiput.

Indication: Sensitive and/or motor disturbances of the lower extremity and as part of the treatment of peripheral edema. Furthermore, infantile enuresis and hysteroptosis are indicated.

Location: Approx. 2 cm behind the parietal tubercle, parallel to the median line (connecting line between EX-HN-3 and GV-16).

Location: Approx. 3.5 cm lateral to the exterior occipital protuberance, parallel to the median line (connecting line between EX-HN-3 and GV-16).

Indication: Conditions of vertigo the cause of which is related to the cerebellum. 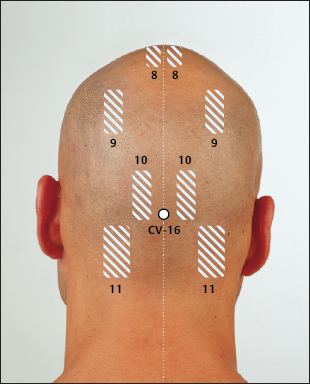 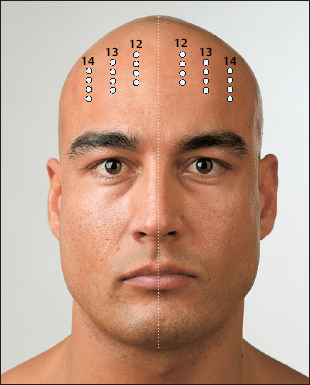 Three zones can be distinguished at the front. They are all in the area of the hairline.

Location: In the hairline, above the medial edge of the eyebrow.

Location: In the hairline, roughly at the level of the center of the eyebrow.

Location: In the hairline, approx. 2 cm lateral to the Abdominal Zone.

It goes without saying that the scalp should be examined in detail for any defects before performing acupuncture.

In the treatment of paralyses, we usually find the reflex zones in the region of the scalp zones contralateral to the paralysis. However, examination of both zones is useful, as trigger points occurring on both sides should also be needled on both sides, regardless of the localization of the paralysis. The best results are described using acupuncture up to the scalp periosteum.

To localize the trigger points, the thumb is run over the suspected area exerting a constant pressure. As a rule, in the event of a disturbance the patient then indicates a circumscribed trigger point or a zone which is needled.

With Chinese scalp acupuncture, treatment is carried out at short, one- to two-day intervals.

Of course, this treatment of paralyses only makes sense with additional, effective physiotherapy.