An active, 61-year-old right-hand-dominant man presents with a 1-year history of anterior arm asymmetry and elbow weakness following a traumatic injury while lifting a heavy chest. He complains of mild anterior elbow pain and achiness of the anterior arm. He also reports moderate weakness to forearm rotation. He denies any numbness or tingling in his arm or hand.

Range of motion of the elbow is full and normal, and the patient has normal elbow stability to valgus and varus stress. He has no tenderness to palpation but has no palpable distal biceps tendon. He has obvious proximal migration of the biceps muscle belly. Strength testing demonstrates 4/5 elbow flexion strength and 3/5 active supination strength. Active supination also causes mild anterior elbow pain.

2. Degenerative arthritis of the elbow

Anteroposterior (AP) and lateral radiographs of the elbow demonstrate mild degenerative changes but no other abnormalities.

This patient complains of moderate weakness to active supination and any operation should be designed with this in mind. To improve supination strength, the distal biceps tendon must be advanced into the area of the radial tuberosity. Advancement of the biceps tendon to the radial tuberosity following a chronic rupture is very difficult. Significant scarring and contracture of both the tendon and the muscle fibers limit the surgeon’s ability to reapproximate the tendon to the tuberosity. Tendon lengthening may be helpful in some cases, but often several centimeters of gap exist after mobilization of the biceps tendon and muscle. In such a situation the authors employ a fascia lata strip reinforced with a ligament augmentation device (LAD) or an allograft tendon graft.

The patient is placed on the operating table in the supine position and the upper extremity is thoroughly prepped and draped. No tourniquet is used. An antecubital incision along with a proximally curved extension is used. The biceps tendon stump is identified and separated so as to maximize length. A traction suture is placed and the muscle and tendon are mobilized. Next, the radial tuberosity is palpated distally and right-angle retractors are used to expose it. The tuberosity is debrided of residual tendon stump. An assessment of the ability to reapproximate the biceps tendon is then carried out. If mobilization will allow for advancement of the tendon into the radial tuberosity, reapproximation using either suture anchors or a two-incision technique is performed. If, after mobilization of the biceps and tendon, reapproximation into the radial tuberosity is impossible, a fascia lata/LAD interposition graft is used.

If the tendon can be reapproximated to the radial tuberosity a two-incision technique may be used (Fig. 46–1). The biceps tendon is exposed through this antecubital approach. Sometimes an extensive dissection of the scarred and contracted biceps tendon is required. Care must be taken to protect the musculocutaneous nerve during mobilization. Two Bunnel no. 2 nonabsorbable sutures are then placed in the leading edge of the tendon. A curved Kelly clamp is then passed through the area where the biceps tendon courses and out the posterolateral elbow. Care must be taken to rotate the clamps so as to avoid the ulna, as dissection in the area of the ulna is thought to predispose to ectopic bone formation. A 2- to 3-cm incision is then made over the prominent Kelly clamp in the posterolateral elbow and the muscle split to expose the radial tuberosity. Maximum pronation of the forearm allows for visualization of the radial tuberosity. The tuberosity is then partly excavated with a high-speed burr and three drill holes are placed into its cortical border. A relatively large portion of the radial tuberosity must be excavated so as to allow for the placement of the biceps tendon stump, but great care must be taken to avoid compromising the integrity of this cortical rim. Next, the previously placed sutures in the biceps tendon are passed into the posterolateral incision and through the three drill holes (two sutures are passed through the middle drill hole). These sutures are then tied down after care is taken to ensure that the distal end of the biceps tendon is well advanced into the excavated radial tuberosity. Routine skin closure is accomplished. A posterior elbow splint is placed with the elbow in 90 degrees of flexion and 45 degrees of supination.

When adequate distal biceps tendon mobilization is not possible, augmentation of the biceps tendon with a fascia lata or tendon allograft and with or without ligament augmentation device is preferred. An LAD is wrapped in an allograft fascia lata graft, leaving the LAD’s proximal and distal ends exposed. Attachment is secured to the radial tuberosity first. Then the LAD–fascia lata complex is sutured to the residual biceps tendon stump and biceps muscle belly. Elbow position is important when suturing the LAD to the muscle belly. Generally 45 degrees of elbow flexion is maintained during suturing (Fig. 46–2). 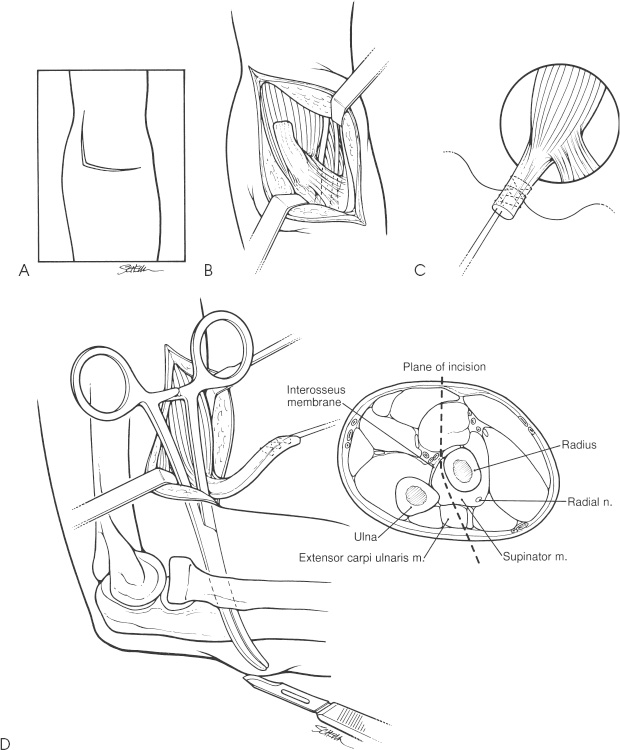 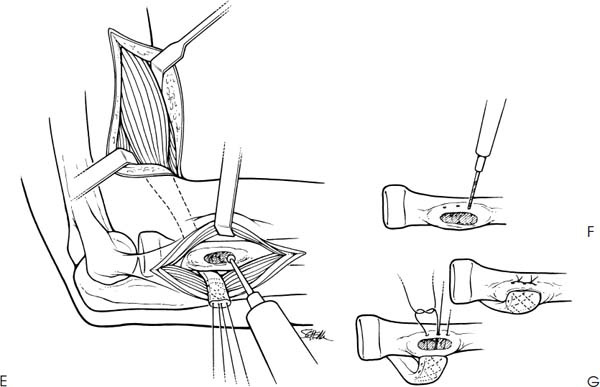 Figure 46–1. (A) The proximal portion of a Henry incision is used to expose the antecubital space. (B) The retracted and scarred biceps tendon is identified. (C) Mobilization of the tendon and muscle unit is carried out with the aid of a traction suture. Two Bunnel no. 2 nonabsorbable sutures are placed into the tendon end. (D) A blunt, curved Kelly clamp is then inserted through the anterior incision until prominent in the area of the posterolateral elbow. A 2- to 3-cm incision is then made over the prominent Kelly clamp. (E) The common extensor and supinator muscles are split to expose the radial tuberosity. The ulna is not exposed. (F) The radial tuberosity is excavated using a high-speed burr. (G) The biceps tendon is then brought through its previous tract and reinserted into the radial tuberosity with the two nonabsorbable sutures.

Figure 46–2. Allograft fascia lata is used to augment a ligament augmentation device (LAD). (A) The LAD is wrapped in the fascia lata graft leaving the LAD exposed approximately 1 cm distally and 5 cm proximally. (B) Attachment is first to the radial tuberosity. (C) The complex is then sutured to the split residual stump of the biceps tendon and to the biceps muscle belly. The elbow should be maintained at approximately 45 degrees of flexion during LAD approximation. (Reprinted from Morrey BF. Tendon injuries about the elbow. In: Morrey BF, ed. The Elbow and Its Disorders, p. 499. Philadelphia: WB Saunders, 1993. With permission.)