A 23-year-old secretary presents 6 months after a posterior elbow dislocation. Reduction was accomplished without difficulty at the time of the injury and range of motion returned quickly. However, since the dislocation she reports intermittent popping, pain, and swelling of her elbow. She denies any frank locking of the elbow. Nevertheless, her symptoms interfere with even normal activities. She denies any numbness or paresthesias in the upper extremity.

Anteroposterior (AP) and lateral radiographs of the elbow are normal.

Posterolateral Rotatory Instability. A positive lateral pivot-shift test suggests posterolateral rotatory instability. A history of a previous posterior dislocation is further support for the diagnosis. The absence of any other significant elbow abnormality rules out valgus instability. Although the patient’s symptoms could be due to elbow degeneration, no radiographic evidence is seen to support this. Also, a loose body could account for the symptoms, especially after a previous posterior elbow dislocation, but loose bodies will not cause a positive lateral pivot-shift test.

The diagnosis of posterolateral rotatory instability is difficult to establish and unusual in occurrence. A careful history and physical examination is imperative, and the physician must maintain a high degree of suspicion in patients with vague complaints of elbow discomfort. Patients with posterolateral rotatory instability often complain of pain, catching, instability, and clicking. Careful history and physical examination may identify increased difficulty when the forearm is in maximum supination. A cursory elbow examination usually fails to reveal any abnormalities. A positive lateral pivot-shift test is required to confirm the diagnosis (Fig. 40–1). O’Driscoll and colleagues (1991) described the posterolateral rotatory instability test. The examination is performed with the patient supine and the shoulder flexed at least 90 degrees. The wrist is supinated and then a valgus moment, combined with an axial compressive force, is applied to the elbow as it is fully extended. This maneuver may reproduce an apprehensive response in a symptomatic patient. Careful palpation of the posterolateral aspect of the elbow during this maneuver is required to appreciate this subtle rotatory subluxation of the radial head. The subluxation of the radial head causes a prominence posterolaterally, combined with a dimple that is sometimes visible at the radiocapitellar joint more anteriorly. As the elbow is flexed, reduction of the subluxation occurs, but this often can be appreciated only when the patient is under general anesthesia. Visible subluxation of the radial head is not as commonly seen as the reproduction of pain when this maneuver is carried out. We consider a significant pain response, in a patient for whom the diagnosis is suspected, to be positive. 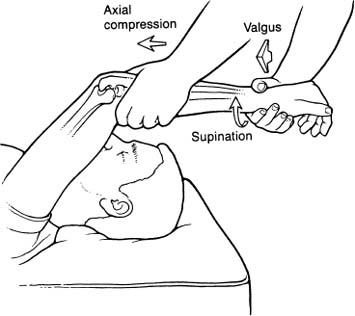 Nonoperative treatment programs including organized exercises, limitations of activity, and medications have not proven effective in this instability pattern. Symptoms are often moderate to severe, limiting even activities of daily living.

The treatment for posterolateral rotatory instability is surgical. The goal of surgery is to restore stability to the elbow and eliminate pain, without limiting motion. An attempt to reattach or reconstruct the avulsed lateral ulnar collateral ligament is the technique we prefer. Capsular plication is sometimes used in addition to repair and/or reconstruction.

Following induction of anesthesia an examination is performed. The lateral pivot-shift test confirms the diagnosis. Examination under anesthesia allows for an accurate assessment of the degree of instability that exists. Lateral stress X-rays or fluoroscopy at the time of surgery will document the instability pattern prior to repair or reconstruction.

• Care must be taken to accurately determine the isometric point on the lateral epicondyle to maximize stability of the graft reconstruction.