Urtica dioica is a prolific Eurasian perennial that has become naturalized around the globe. Two major subspecies are recognized as important in medicine in the West: dioica, the standard stinging nettle, and gracilis, the California nettle. Urtica urens, the dwarf or dog nettle, is also used interchangeably. The leaves, fruit (often inappropriately called seeds), and root are all used, each somewhat differently.

Nettle leaves are known to contain flavonoid glycosides (including quercetin and kaempferol), phenylpropanoids (including caffeic malic acid), sterols, carotenoids, vitamins, and minerals.1 The stinging hairs contain formic acid, histamine, serotonin, and choline, among other irritants. Very little is known about the chemistry of the fruits except that they contain protein, carbohydrate, and 30% fatty acids.1

The chemistry of the roots of stinging nettle has been the most thoroughly examined.2 Acidic polysaccharides, lectins, sterols including β-sitosterol, triterpenoids, the coumarin-like compound scopoletin, phenylpropanoids, ceramides, and lignans are all potentially related to the physiologic effects of the roots (Figures 129-1 and 129-2).3 Lignans of potential importance include neoolivil and secoisolariciresinol, which are metabolized by human gut flora to enterodiol and enterolactone, well-characterized phytoestrogenic compounds.4 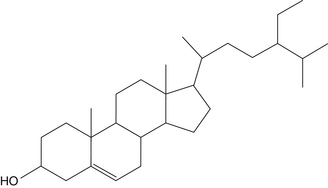 Urtica species have long been employed as medicine in Europe and Asia. The steamed or dried leaves were eaten as a vegetable or seasoning and often still are.4 Nettle fiber was formerly processed into thread used to make clothing, rope, and sailcloth, although it was ultimately replaced by flax. The source of the fiber known as “ramie” comes from the plant Boehmeria nivea, which is also in the Urticaceae family. The word nettle appears to be derived from the old Anglo-Saxon noedl, “needle,” and even before that to the common Indo-European verb ne, “to spin/sew.” There is little record of use of the roots in traditional cultures except as a source of yellow dye.4

Medicinally, stinging nettle leaves were once considered a spring tonic, taken each year in particular by patients with chronic skin or rheumatic conditions.5 The leaves’ diuretic (also ascribed to the fruits), tonifying, lactagogue, antiasthmatic, antihemorrhagic, and “blood-building” properties are consistently referenced by European herbalists.6 Up to modern times, there are descriptions of applications of fresh leaves to aching joints, intentionally causing stings to relieve symptoms. Stinging nettle leaves are also frequently said to promote hair growth.

The two principal effects of stinging nettle leaves are inhibition of inflammation and promotion of diuresis. Most research has involved a proprietary 50% ethanol 10:1 extract of the leaves known as IDS 23 (Strathmann AG & Co, Hamburg, Germany). In vitro, IDS 23 extract and caffeic malic acid inhibit 5-lipoxygenase and cyclooxygenase (isotype not determined); the whole extracts are more potent than caffeic malic acid alone.7 IDS 23 also inhibits the secretion of tumor necrosis factor-α and interleukin-1-β induced by lipopolysaccharide in human blood; phenylpropanoids and flavonoids isolated from the leaves were not effective in this system.8 Perhaps even more important, IDS 23 has been shown to inhibit activation of nuclear factor kappaB (NFkappaB) by preventing degradation of its inhibitory subunit, IkappaB, in vitro.9

In vitro, IDS 23 stimulated production of IL-4 by monocytes and inhibited production of IL-2 and interferon-γ (IFN-γ).10 IL-4 production promotes formation of type 2 helper T cells, which are associated with much less inflammation than type 1 helper T cells. Preliminary in vitro research also shows that nettle leaves are strong antioxidants.11 The multiple inflammation-modulating, immunomodulating, and antioxidant effects of stinging nettle leaves help explain how they could be helpful for so many inflammatory diseases.

A double-blind placebo-controlled trial confirms that stinging nettle root extracts inhibit or reduce sex hormone–binding globulin (SHBG) levels in men with benign prostatic hyperplasia (BPH).17 In vitro, ethanolic extracts were shown to decrease the binding of dihydrotestosterone by SHBG.18,19 Lignans and trihydroxyoctadecenoic acids but not triterpenoids were active in this study. These results clearly suggest that multiple active compounds in stinging nettle give this medicinal plant a broad spectrum of effects.

Stinging nettle root extracts have also been repeatedly shown to interfere with binding of epidermal growth factor, a major stimulus of BPH, to its receptor on prostate cells.4,20 Lectins appeared to be the most active compounds isolated in these studies.

The major uses of stinging nettle, organized according to the part being used and the route of administration, are shown in Table 129-1.21 Published clinical trial data are available on three of these indications, as discussed here.