Crataegus oxyacantha is a spiny tree or shrub that is native to Europe. It may reach a height of 30 feet, but is often grown as a hedge plant. Its common name, hawthorn, is actually a corruption of “hedgethorn,” because it was used in Germany to divide plots of land. Its botanical name, C. oxyacantha, is from the Greek kratos, meaning hardness (of the wood); oxus, meaning sharp; and akantha, meaning a thorn. The fruit and blossoms are used medicinally.1

Other species of crataegus (e.g., C. monogyna, C. pentagyna) contain similar constituents and likely have identical pharmacologic actions to C. oxyacantha, so they are suitable alternatives.2,3

Hawthorn leaves, berries, and blossoms contain many biologically active flavonoid compounds, particularly anthocyanidins and proanthocyanidins (polymers of anthocyanidins, also known as biflavans or procyanidins) (Figure 82-1).2–5 These flavonoids are responsible for the red to blue colors not only of hawthorn berries, but also of blackberries, cherries, blueberries, grapes, and many flowers as well. These compounds are highly concentrated in hawthorn berry and flower extracts. 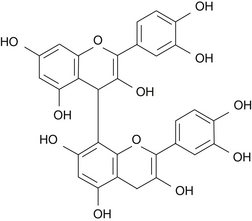 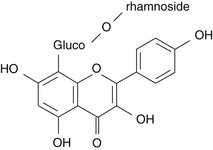 Crataegus flowers and berries have been used primarily as cardiac tonics and mild diuretics in organic and functional heart disorders. They are also used for their astringent qualities to relieve sore throat pain.1

The pharmacology of crataegus centers on its flavonoid components.2,3 The proanthocyanidins in crataegus are largely responsible for its cardiovascular activities.

As stated earlier, crataegus is particularly rich in anthocyanidins and proanthocyanidins. These flavonoids have strong “vitamin P” activity. Included in their effects are the abilities to increase intracellular vitamin C levels, stabilize vitamin C (by protecting it from oxidation), and decrease capillary permeability and fragility.4,8,9

• Reinforcement of the natural cross-linking of collagen that forms the collagen matrix of connective tissue (e.g., ground substance, cartilage, tendon)2,4

• Inhibition of enzymatic cleavage by enzymes secreted by leukocytes during inflammation4

• Prevention of the release and synthesis of compounds that promote inflammation, such as histamine, serine proteases, prostaglandins, and leukotrienes4

The beneficial effects of crataegus in the treatment of cardiovascular conditions appear to be a result of the following pharmacologic actions:

• Improvement of the blood supply to the heart by dilating the coronary vessels2,3,11–15

• Improvement of the metabolic processes in the heart, which results in an increase in the force of contraction of the heart muscle and elimination of some types of rhythm disturbances2,3,11,16–18

Crataegus’s ability to dilate coronary blood vessels has been repeatedly demonstrated in experimental studies. This effect appears to be due to relaxation of vascular smooth muscle by a combination of direct effects on both the vascular endothelium and smooth muscle. In addition, various flavonoid components in crataegus have been shown to inhibit vasoconstriction by various substances, including hypophysin, histamine, and acetylcholine. In addition, procyanidins have been shown to inhibit ACE.2,3,20

Improvement in cardiac metabolism has been demonstrated in humans and animals who have received crataegus extracts.2,3 The improvement is not only a result of increased blood and oxygen supply to the myocardium, but also a result of flavonoid-enzyme interactions. In particular, crataegus extracts and various flavonoid components in crataegus have been shown to inhibit cyclic adenosine monophosphate phosphodiesterase (cAMP-PDE).21 This results in increased levels of cAMP within the myocardium, leading to a positive inotropic effect (i.e., an increase in the force of contraction). This is particularly beneficial in cases of congestive heart failure (CHF) (discussed in the section on “Congestive Heart Failure”).

The procyanidins of crataegus demonstrated a specific inhibition of ACE similar to synthetic ACE inhibitors widely used in the treatment of hypertension.20 The proanthocyanidins that appear to have the highest activity are proanthocyanidins B-5 3,3′-di-O-gallate and C-1 3,3′,3″-tri-O-gallate. It is not surprising that these proanthocyanidins are found in relatively high concentrations in hawthorn berries, flowers, and their extracts.5,6