The Italian Society of Orthopaedics and Traumatology (SIOT), Rome, Italy
(4)

The Italian Society of Orthopaedics and Traumatology (SIOT), Rome, Italy
(8)

Intramedullary fixation methods were developed at the end of the nineteenth century. In 1883, Stimson was the first person who described a synthesis method with ivory hinges fixed into the medullary cavity [5], but it was Ernest Hey-Groves who first used metal nails in 1912 [6]. The “true” intramedullary fixation technique, with the use of an intramedullary nail, was developed in the 1930s independently by the Rush brothers in Minnesota and by Gerhard Küntscher in Hamburg [7, 8], and this method was used and experimented on a large scale during World War II. The method became popular thanks to Klemm and Shelman, and Gross and Kemf in the 1970s [9, 10].

Many surgeons were perplexed about the use of intramedullary nails in subjects with exposed fracture focus. In the first few years of the 1950s, Gavrijl Abramovich Ilizarov developed a circular fixator, which allowed to stabilize bone fragments, but also allowed three-dimensional reconstructions. In 1980, the technique was introduced to Europe thanks to the Italian surgeon Carlo Mauri, who had been treated successfully after a pseudo-arthritis of Ilizarov tibia. During the 1970s, De Bastiani developed the “dynamic axial fixator”, and Gotzen the “Monofixator” [11]. Nowadays the external fixator is still used in the treatment of fractures associated to a large range of soft tissue damages, and in the fixation of hip and long bones in poli-traumatized patients.

Arbuthnot and Lambotte (1905) are considered the founders of synthesis with plaques and screws [12]. Later on, the principle of inter-fragmentary compression, described by Danis, became extremely popular thanks to the scientific work of the AO team at the end of the 1950s [13]. In 1967, Schenk and Willenegger demonstrated that, in anatomical reduction and with inter-fragmentary compression, bone necrosis and retraction are reduced, and the bone tissue growth occurs fast, thus leading to primary bone recovery without callus formation [14].

The healing of fractures needs some optimal conditions, which include stabilization, fragment juxtaposition, and a correct biology. Since the pioneers of traumatology, further synthesis means and more and more sophisticated and minimally invasive fixation techniques have been developed. Thanks to their contribution, in the last few years the development of new osteosynthesis techniques has allowed to achieve better and better immobilizations, and juxtaposition between the fracture heads, thus allowing the immediate load and a fast functional recovery.

3.2 Fracture of the Nasal Septum

3.2.1 Morphological and Palaeopathological Description of the Subject

The subject is male, and has a strong skeleton, even though the muscular insertions are generally poorly developed. On the inferior surface of the right clavicle, the rhomboid fossa lies as a deep depression with jagged margins and a rough surface, while the contra-lateral area is slightly porous and defined by irregular margins. These lesions [15] indicate generalized stress on the pectoral muscle, particularly when the shoulders are hunched forward while carrying heavy weights [16, 17]. Among the muscles involved in plantar flexion, the only one showing mild variations is the soleus muscle; the rest of the appendicular skeleton – both superior and inferior – does not show any enthesopatic alterations. Even though most somas of the thoraco-lumbar vertebrae were destroyed post-mortem, three Schmörl hernias have been detected, and these can probably be associated to the ponderal overload, in particular to the strain of carrying heavy weight on the back [18]. A massive periosteal reaction with new bone production is observable on the diaphyses of tibias and fibulas: there is a thick layer of bone tissue, characterized by irregular surfaces and thin spicules, lying perpendicularly to the cortical. Periostitis is more commonly found on the anterior surface of the tibial diaphysis.
Among the anatomical variants, the morphology of the first left rib is peculiar, as it shows a fork, with rounded corner at the sternal extremity (Luschka rib) [19]; since the body of the bifurcated rib (Fig. 3.1) is as tall as the contra-lateral, it is not a case of complete fusion of two consecutive ribs. The cranial and transverse fronto-parietal indices of the skull have intermediate values, which indicate mesocrany and metriometopy respectively, while the height index suggests a high skull (hypsicranic). The frontal crests diverge, the orbits are large, and the piriformis aperture is long and narrow (leptorrhine). A fracture can be seen on the nasal bone, with a deviation of the septum to the left (Fig. 3.2). 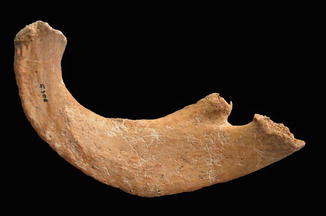 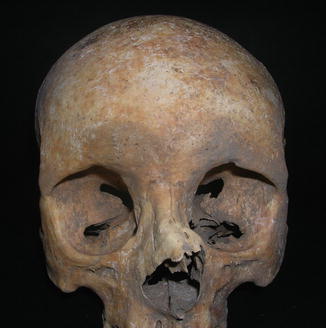 3.2.2 Description of the Fracture

The clinical case shows a deviation of the nasal pyramid on the left. The likely presence of bone callous on the surface suggests the hypothesis of a post-traumatic deviation as a consequence of the fracture of the pyramid, rather than a congenital deviation of the nose (Fig. 3.2). The most common dynamics is a direct trauma in the direction of the deviation (e.g. a punch on the nose). Among the fractures involving this region, the fracture with a deviation of the pyramid is the most common one, and it involves both nasal bones, the septum, and sometimes the frontal process of the maxillary sinus. The acute clinical case shows swelling, bruising and bleeding from laceration of the nasal mucosa and can hide the deformity, thus delaying a manual correction and resulting into deformity after swelling resolution. On top of the aesthetic damage, this type of fracture determines an obstruction of varying degree of one or both nasal cavities. The deviation can be clearly seen macroscopically, and from a radiology (Figs. 3.3 and 3.4), which only shows lateral deviation and does not allow further assessments due to the overlapping of several bone structures. 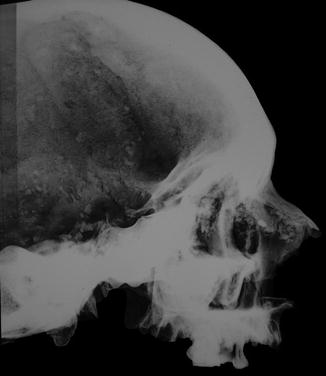 X-rays (lateral view) of the nose 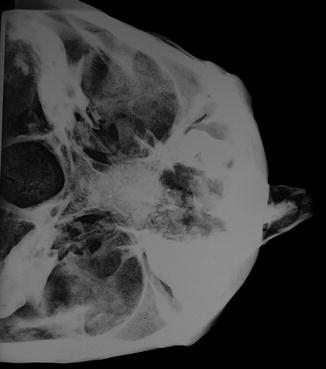 3.3 Fracture of the Humerus

3.3.1 Morphological and Palaeopathological Description of the Subject

The subject is averagely built, with round-shaped humeri (euribrachy), and flattened femurs antero-posteriorly (platimery). The skull is high (hypsicranic) and elongated (dolichocranic), with averagely diverging frontal crests, the orbits are large (hypsiconchic) and the nose shows a long and narrow piriformis aperture (leptorrhine). The hypoplasia of the enamel and the simultaneous presence of cribra cranii and orbitalia suggest episodes of generalized suffering occurred during early childhood. The subject’s health is characterized by the presence of a few dental caries, the likely cause of the loss of several teeth intra-vitam. A large cavity affected the first left maxillary premolar, and its alveolus shows osteolisis, probably caused by an odontogenic abscess (Fig. 3.5) [20]. The deltoid tuberosity of the clavicles is irregular, with small enthesopathic bone spicules associated to erosions, and the insertion area of the pectoralis major muscle shows a strong, flattened surface. The infraglenoid tubercle of the right scapula highlights a wide, marked ruggedness at the insertion of the long head of the triceps brachii. The insertion area of the pectoralis major on the humerus is marked and rough bilaterally, the surfaces of the lesser and greater right tuberosities, where the muscles of the rotator cuff are attached, show alterations with erosions and ruggedness. The left ulna shows a mild enthesopatic ossification, implanted on the upper margin of the posterior facet of the olecranon (woodcutter’s lesion) [21]. The enthesopaties detected on the upper limbs affect the muscles promoting adduction and anteversion movements of the arm and extension of the forearm on the arm. The lower limbs do not show signs of any relevant muscular stress, even though the antero-posterior flattening of the superior third of the femoral diaphysis is generally associated to a strong development of the trochanters due to biomechanical stress. A pathological anomaly involves both patellas, where the superior lateral ossified nucleus is not welded to the rest of the bone (bipartite patella) (Fig. 3.6): in that area the margin is rough and eroded [22]. A small sessile ossification, 22 mm long and 8 mm wide, is situated on the cortical of the left femur’s posterior face (myositis ossificans) (Fig. 3.7): a traumatic episode, probably limited to the soft tissues, may have caused a haematoma, with the production of a calcification of the torn muscular tissue [23]. The subject has some mild arthritic degenerations, which are confined to a few skeletal regions. A widespread porosity on the sternal and acromial extremities of the clavicles, on the glenoid cavity of the scapulas and on the humeral heads are all signs of suffering of the shoulders’ joint cartilage. There are mild degenerations on the hip joints, with erosion and reshaping of the femoral heads and of the acetabulum. The bodies’ ventral margins and the articular facet of some cervical and lumbar vertebrae show small osteophytes. The thoracic vertebrae do not show any somatic alterations, except for the three small imprints of intraspongeous hernias and small laminal spurs on the superior border, in the insertion points of the inferior ligamenta flava.

3.3.2 Description of the Fracture

The fractures of the distal humerus account for 2 % of all fractures and 1/3 of the humeral fractures [24]. The direct trauma mechanism is the most common, while less frequently the indirect one, due to rotation traumas, leads to spiral or oblique fractures.
The clinical case shows the consequence of a fracture of the distal third of the right humeral diaphysis (Fig. 3.8). This site represents the least common one if compared with the fractures of the other two segments of the humeral diaphysis, the middle third (most common) and the proximal third (second most common). The fracture looks well healed, with bone callous formation, thus suggesting a secondary bone healing. The bone callous progress, though partly reshaped, looks like the type of fracture that could have been oblique or spiroid, meaning an indirect rotational trauma. There might have been a third fragment on the medial profile, where the callous is most overabundant. This hypothesis can be supported also by the slight varus deviation of the distal part of the segment. The remaining axes of the segment look well preserved, and the healing of the fracture clears (Fig. 3.9). This recovery picture does not show any alterations in the limb’s function.

Fracture of the right humerus

3.4 Fracture of the Radius and Ulna

3.4.1 Fracture of the Medial Third of the Radius and Ulna

3.4.1.1 Morphological and Palaeopathological Description of the Subject

The subject is of average build, with particularly marked muscular imprints only at the pectoral girdle and at the upper arms. The clavicles and humeri show enthesopaties at the origin and insertion of the deltoid and subscapularis muscles, which are used respectively, for abduction and rotation of the arm. The inferior appendicular skeleton does not show any enthesopathic alterations, even though the femurs reveal an antero-posterior flattening of the diaphyseal superior third (platimery).
The presence of only two Schmörl’s nodes at the thoracic tract of the spine, together with a mild degree of arthritis, suggests a low ponderal and functional load of the column. The extra-vertebral arthritis, limited to the shoulders joint, may be linked to the subject’s advanced age.
The marked preauricolar grooves of the ileum, the hypertrophy of the pubic tubercle and the depressions of the hind symphysis area may be the signs of birth giving; tooth cavities and the loss intra-vitam of several teeth, may result from a calcium deficiency due to pregnancies [25–27].
The examination of the maxillary dento-alveolar complex, shows two abscesses, on the right first and second molar and the agenesis of the left second incisor and first molar. The height and horizontal cranial indices have average values (mesocranic and orthocranic) and the frontal crests are averagely diverging.
In addition to the fracture of the left radius and ulna, the palaeopathological study shows a likely muscular trauma of the diaphyseal distal third of the right fibula, three right rib fractures and one left rib fracture.

This case shows a biosseous fracture of the diaphyseal medium third of the radius and ulna with synostosis and calcification of the interosseous membrane (Fig. 3.10 a, b). Radius and ulna fractures may lead to several complications, including Volkmann Syndrome, which is the most severe one, and post-traumatic radio-ulna synostosis, which is rather infrequent, since its incidence accounts for 3–9 % [28].

(a) Consequence of radio-ulna diaphyses fracture with synostosis (b) Detail
The most common risk factors associated with this complication are as follows: