The Italian Society of Orthopaedics and Traumatology (SIOT), Rome, Italy
(4)

The Italian Society of Orthopaedics and Traumatology (SIOT), Rome, Italy
(8)

5.1.1 Historical Developments in Musculoskeletal Oncology: From Amputation to Limb Conservation

5.2.1 Osteochondroma of the Proximal Humerus

5.2.1.1 Morphological and Palaeopathological Description of the Subject

The skeleton, pertaining to a mature male subject, is whole and in a good state of preservation. The cranial indices denote a roundish shape (brachycranic), with averagely diverging frontal crests; the orbits are large (hypsiconchic), while the nasal index has intermediate values (mesorrhine). The right portion of the frontal bone shows a sub-circular depression, presumably due to a trauma (Fig. 5.1). Two Wormian sutural ossicles can be observed bilaterally along the lambdoid suture. The oral pathologies consist of moderate calculus build-ups on all the teeth and resorption of the alveolar margins, both on the maxillary and mandibular bones. Moreover, some cavities can be observed only on the left emi-maxillary: a destructive one on the second molar, a mild one at the mesial neck of the first premolar, and a superficial one mesially on the third molar. The right superior second incisor and right inferior canine present rotated if compared with proper alignment. The section indices of the limbs suggest a robust subject with well-developed muscular insertions. The shoulders seem particularly under stress, with the presence of enthesopathies at the insertion of the costo-clavicular and conoid ligaments of the right clavicle and at the insertion of the pectoralis major muscle of the right humerus. The femurs are platymeric, and the attachment tubercle of the adductors, on the medial condyle of the right femur is hypertrophic and defined by bone spicules. The third trochanter can also be detected on the right femur, and is considered as a variant of the post-cranial skeleton [14] by some authors, while others consider it as an occupational marker, because it is a part of the insertion of the gluteus major muscle [15]. The lateral epicondyle of the right tibia shows the outcomes of a likely depression fracture, with remodelling of the antero-medial margin and new bone apposition (Fig. 5.2). A concave depression of the supero-lateral margin of the right patella may have resulted from a prolonged contraction of the quadriceps (vastus notch). A severe and localized periostitis can be observed on the proximal third of the right fibula diaphysis. Only the joint of the left elbow shows some arthritic signs: the trochlea articular margins are raised and irregular and the coronoid fossa is enlarged, with well-defined margins; a small area of subchondral necrosis can be detected on the lateral epicondyle (osteochondritis dissecans) [16]. In addition, the surfaces of the olecranon and of the coronoid process are expanded, with new spicular bone formations. The vertebral column is affected by mild degenerative, erosive, and productive phenomena, and four thoracic vertebrae, on the eight that can be observed, show Schmörl’s hernias. Bilaterally the ischiatic tuberosity, at the origin point of the semitendinous muscle, is extended and eroded, the potential manifestation of a chronic inflammation.

Depression on the frontal bone

Fracture of the lateral epicondyle of the right tibia

Osteochondroma (also called exostosis or osteocartilaginous exostosis) is the most common benign lesion affecting the bone and accounts for 10–15 % of all bone lesions, both in women and in men [17]. The location is typically metaphyseal or metadiaphyseal. In this case, the metadiaphyseal location, the large implant base, and the continuity of the medullary from the host bone into the exostosis with no periosteal reaction is highly suggestive of sessile osteochondroma of the proximal left humerus (Fig. 5.3). The macroscopic examination shows the top of the extostosis as a spongious marrow, resulting from the loss of the cartilaginous cap. The absence of intramedullary and periosteal reactions (Fig. 5.4) of the contiguous bone rules out malignancies. In this type of lesion, the area more prone to a malignant transformation is the cartilage cap (chondrosarcoma) with a percentage <1 % in single cases and from 3 to 5 % in cases of multiple exostoses [17]. Symptoms depend on the site of the lesion and on the adjacent structures, because the clinical picture depends on the compression “ab extrinseco” of the exostosis.

X-rays antero-posterior view of the proximal humerus. Exostotic lesion with no osteostructural alterations

5.2.2 Osteochondroma of the Proximal Tibia

5.2.2.1 Morphological and Palaeopathological Description of the Subject

The skeleton belongs to a young subject; even though the state of preservation is good, the right humerus is missing completely, and only a few fragments of the skull’s right parietal and occipital bone are left. The examination of the mandibular dento-alveolar complex shows the presence of a decay at the mesial position of the dentine, of the left second molar and one on the occlusal surface of the left third molar; the right third molar is typically peg-shaped (Fig. 5.5): it is a small-size tooth, without the normal crown morphology (diameter b-l: 3.9 mm) [18].

Peg-shaped right third molar
The skeleton is in the growth phase and shows some metaphyseal lines still partially active when the subject died. The right radius, ulna (the humerus is missing) and lower limb are about 8 mm longer than their contra-laterals. The ligament and tendon insertions are generally weak: only two enthesopathic alterations can be detected at the insertions of the brachii muscle of the left ulna and iliopsoas of the right femur. The fifth lumbar vertebra shows an early sacralization with osteophytic reaction and remodelling of the articular facets. The anteversion of the right femoral neck (Fig. 5.6) is noteworthy, that is the angular difference between the axis of the neck of the femur and the transcondylar axis of the knee. The anteversion of the femoral neck, which is an important feature for hip stability and normal ambulation, is a multifactorial outcome of heredity, fetal development, intrauterine position, and mechanical forces [19]. The anteversion of the femoral neck draws an angle of about 55°. The right clavicle exhibits a well-healed fracture in the diaphyseal portion, with overlapping of the two bone stumps and robustness of the lateral extremity. Only a few vertebral fragments of the cervical column and of the superior tract of the dorsal one are left. On the contrary, the tract between T9 and L5 is well preserved; five thoracic vertebrae show osteophytic interapophyseal degenerations and two Schmörl’s hernias. Because of the subject’s young age, the alterations on the axial skeleton may be due to biomechanical stress.

The anteversion of the right femoral neck

A pedunculated osteochondroma can be observed on the medial profile of the left tibia’s proximal part (Fig. 5.7). When exostoses are so small, a differential diagnosis with the insertional calcifications of the tendons is needed. However, the present case shows a “centrifugal” attitude of the knee joint that is characteristic of osteochondroma. Even in this case, X-ray examination (Fig. 5.8) shows the lack of periosteal and endosteal reaction of the host bone and the continuity of the exostosis’ cortical and medullary with that of the tibia. In some cases, such small lesions in areas with a reduced representation of the adjacent soft tissue make the exostoses a potential site for its own fractures, and this would explain the remodelling of the end edge of this subject’s exostosis. The clinical picture shows a condition that ranges from silent to localized pain, mainly in case of fracture of the exostosis, with local swelling and jerk sensation during exercise due to conflict with the adjacent soft tissues. 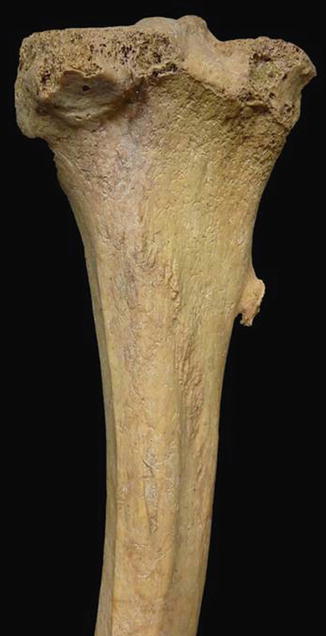 Osteochondroma of the left tibia
Only gold members can continue reading. Log In or Register to continue