The taxonomic division of plants with medicinal uses in the Bignoniaceae family is confusing. The literature often interchanges the genera of Tecoma and Tabebuia. Some are now using the name Tabebuia impetiginosa as a synonym. At least four species have been called lapacho:

This chapter considers the Tabebuia genus.

The tree from which lapacho is obtained is a member of the Bignoniaceae family known as Tabebuia avellanedae, Tabebuia impetiginosa, or Tabebuia ipe. There are about 100 species of these evergreen trees or shrubs, native to tropical America. They can grow up to 125 ft tall and have very showy rose- to violet-colored flowers that bloom in profusion just before the new leaves appear.

Because the taxonomy of these plants is so difficult, it is quite possible that there is confusion even among trained gatherers.

Many of the studies and chemical analyses on Tabebuia species have been performed on the heart wood, but the bark and inner bark are the products available in the marketplace and the parts used in folklore. The major components of T. avellanedae are 16 quinones (mostly with C15 skeleton) containing both naphthoquinones (seven, C10 to C5) and anthraquinones (nine, C14 to C1). Both of these groups of quinones rarely occur in the same plant. The lapachol content is usually 2% to 7%. The quinones are listed in Box 125-1. Other compounds found are lapachenole, quercetin, and o– and p-hydroxybenzoic acids.1 The action of lapacho comes from an array of quinones and other constituents, not just one or two.

The indigenous peoples of Brazil also refer to this tree as pau d’arco or ipe roxo. The inner bark has been used for medicinal purposes for centuries as a folk remedy for a wide variety of afflictions, including the following2–5:

• Cancers of the esophagus, head, intestine, lung, prostate, and tongue

Lapacho is reported to be alexiteric, analgesic, anodyne, antidotal, antimicrobial, diuretic, and fungicidal.2

During the nineteenth century, Lapacho was subjected to scientific scrutiny, with the first active constituent, lapachol, isolated by Paterno in 1882 (Figure 125-1).

Interestingly, many of the scientific studies have found lapacho and lapachol to be more effective in treating malaria and cancerous tumors through oral ingestion rather than intravenous or intramuscular injection.6

An herbalist’s interpretation would be that the body’s recuperative powers are more effectively stimulated by the natural route of nutrient plant material absorption through the digestive tract. Although most of the studies have been of individual chemicals, some show significantly better results with the whole extract and diminishing effectiveness as the extracts are refined or individual chemicals are tested.6,7

Lapachol isolated from the T. avellanedae tree has exhibited antimicrobial activity against gram-positive and acid-fast bacteria and Brucella species as well as fungistatic behavior.8,9 It is important to note that the research team found that progressive purification reduced the antimicrobial activity of the extract. This finding led to the conclusion that more than one active substance was present in the original extract.

It was eventually found that, along with lapachol, the extract of the Tabebuia tree contained α-lapachone, β-lapachone, and a newly discovered quinone called xyloidone. 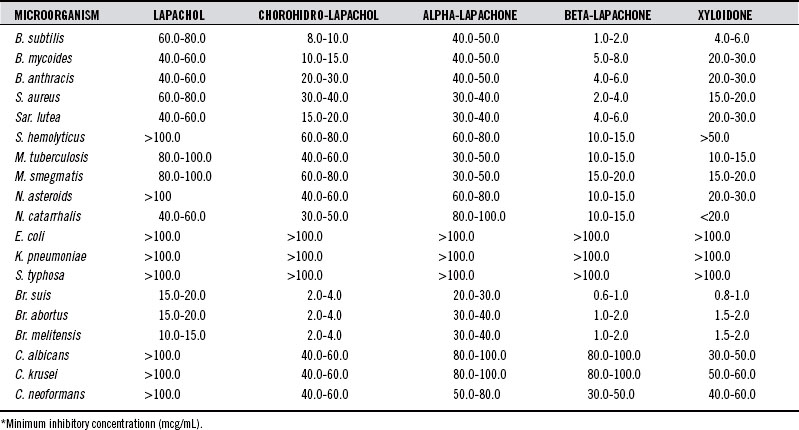 Lapachol has been shown to have both antimicrobial and antiviral activity.8,10,11 Beta-lapachone shows diversified antiparasitic activity as well as antiviral action.12,13 Alpha-lapachone is also active against certain parasites, and xyloidone is active against numerous bacteria and fungi.14,15 Another lapacho component, the flavonoid quercetin, is cytotoxic for certain parasites.16

Xyloidone is effective against a wide array of organisms, including Staphylococcus aureus and the Brucella species. This component also inhibits the causative agents of tuberculosis, dysentery, and anthrax.

Lapachol, like many naphthoquinones, acts as a respiratory poison by interfering with electron transport in microbes.17,18 At concentrations of 100 mg/L, lapachol was found to inhibit O2 uptake by Plasmodium knowles by 74% and succinate oxidase systems by 26% and thus to exhibit antimalarial activity.19,20 Mitochondrial respiration is inhibited by 50% at a lapachol concentration of less than 110 µmol/L.21 Increasing doses of lapachol produced progressive respiratory inhibition in tumor cells isolated from animals. Oxygen consumption and oxygen metabolite production are inhibited in neutrophils on administration of lapachol.22

Lapachol has now been shown to act as an uncoupler of oxidative phosphorylation. Lapachol prevents synthesis of adenosine triphosphate by stimulating respiration in the absence of a phosphate acceptor. This effect is most pronounced at a high pH, at which lipid solubility is the lowest.23

Lapachol inhibits certain enzymes; in particular, it is a competitive inhibitor of glycolase I in erythrocytes. Lapachol also demonstrates noncompetitive inhibition of α-keto-aldehyde dehydrogenase, leading to the accumulation of toxic α-ketoaldehydes.24 Lapachol demonstrated 64% inhibition of 3-α-hydroxysteroid–mediated transhydrogenase at a concentration of 10-5M (well within the dosage range).25

Lapachol has proved to be active against certain viral strains, including herpesvirus hominis types I and II.25 Hydroxynaphthoquinone has been shown to effectively inhibit four influenza viruses. Lapachol also significantly inhibits poliovirus and vesicular stomatitis virus.10

Beta-lapachone’s antiviral activity has been demonstrated by its ability to inhibit certain enzymes, such as DNA and RNA polymerases.26 Beta-lapachone was tested against avian myeloblastosis virus and Rauscho murine leukemia virus and found to inhibit retrovirus reverse transcriptase.27 In the presence of dithioreitol, β-lapachone inhibits eukaryotic DNA polymerase-alpha activity. Although the mechanism of action for enzyme inhibition is complex, it may be related to superoxide production.26 This issue has great significance for possible treatment of both human immunodeficiency virus and Epstein-Barr virus (the implicated viruses in acquired immunodeficiency syndrome and Epstein-Barr syndrome, respectively).

Beta-lapachone also inhibits Friend virus and was the only substance among a number tested that prolonged survival time of chickens infected intraperitoneally with Rous sarcoma virus.28

The trematode Schistosoma mansoni is the causative agent of the common tropical disease schistosomiasis. The cercariae of this blood fluke live in water and enter the host by penetrating the skin. This debilitating disease, a serious problem in many tropical areas, causes weakening of the host and increases susceptibility to a variety of other pathogens, some of which may be fatal.

Lapachol has been tested as a topical barrier to the cercariae and has been found to be highly effective at preventing its penetration.26,29 Oral lapachol was also tested and found to significantly reduce penetration. After being consumed, the lapachol was secreted onto the skin, apparently by the sebaceous glands, where it again acted as a topical barrier. The cercariae seek to penetrate the host through or near the sebaceous glands, suggesting that dietary administration of lapachol would be an efficient means of protecting against infection. Alpha-lapachone and β-lapachone, also components of lapacho, both exhibited activity against S. mansoni.8 Beta-lapachone is notably effective against Trypanosoma cruzi, a zoomastigote responsible for trypanosomiasis, or Chagas’ disease, which occurs in both acute and chronic forms and has no known cure.

Beta-lapachone causes complete inhibition of T. cruzi at concentrations of 0.8 to 5.0 µg/mL and progressively inhibits motility with increasing concentrations. When T. cruzi epimastigotes were incubated with the quinone, they were subjected to nuclear, mitochondrial, endoplasmic reticular, and cytoplasmic membrane damage and underwent alterations in the chromatin distribution. Respiration rates were lowered, the mitochondria became swollen, and glucose and pyruvate oxidation was inhibited. Lipid peroxidation was stimulated, leading to decreased cell viability.

It is thought that this toxic action against parasites is at least partly due to superoxide production.32 Both O2_ and H2O2 are intermediates of oxygen reduction, and both are toxic to living organisms. When β-lapachone is introduced to T. cruzi, it rapidly enters the epimastigote and is reduced to its semiquinone form in the mitochondria and microsomes of the pathogen.33 Superoxide is produced by the reduction of molecular oxygen, which is facilitated by autooxidation of the semiquinone free radical. Superoxide is then converted to hydrogen peroxide via superoxide dismutase. Stimulation of lipid peroxidation follows and the cell degenerates.