(a, b) Formationskydiving (Photo: Dario Vecchiato)

In freeflying and freestyle, sequences of free-fall moves are scored by judges (Fig. 16.2); in sky surfing, sequences are performed with the jumper wearing a board similar to a snowboard.

Freeflying and freestyle are artistic events in which one member of the team wears a camera and films the video to be judged (Photo: Dario Vecchiato)
Speed and correctness of execution of a prescribed sequence of maneuvers are the goals of freefall style, while in accuracy landing and team accuracy, the aim is to land as closely as possible to the center of a target.
In canopy piloting, parachuted flight is judged in terms of speed, distance, and accuracy.
Canopy formation consists of building different formations while under open canopies.
In speed skydiving, the aim is to achieve and maintain the highest possible terminal velocity. Thanks to the minimization of drag by streamlining the body, generally in a head-down position, it is possible to achieve speeds of 480 km/h, which are more than double the terminal velocity in the traditional belly-to-earth position (200 km/h) [1].
High-altitude jumps include the two subdisciplines of HALO (high altitude – low opening) and HAHO (high altitude – high opening), derived from high-altitude military parachuting, and may require supplemental oxygen.
Apart from the aforementioned disciplines, skydivers may take part in special stunts or events and performances, including night jumps, big ways (large formation jumps), or stuff jumps, in which skydivers jump out with an object (Figs. 16.3 and 16.4). 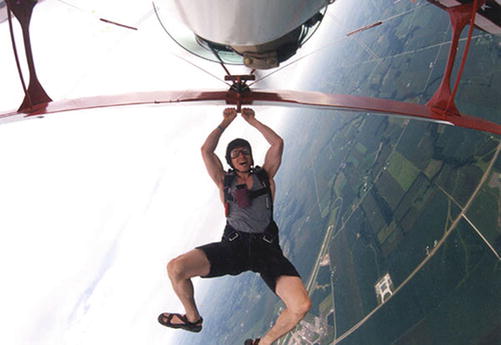 16.3 Review of Literature on Skydiving Injuries and Fatalities

Early studies were primarily conducted by the military and involved older parachute technology (e.g., “round” parachutes). Historically and today, the majority of injury literature comes from military studies. A summary of injury rates in early studies can be seen in Table 16.1. Of particular note from the early studies is the research by Kiel et al. (1965) [2]. This research included over 1 million jumps, from predominantly civilian records, and is the best estimate of mortality associated with the sport in the early period. In regard to sport parachute mortality, the “100 deaths” came about for a variety of reasons, including airplane crashes with parachutist aboard (3), unintentional parachute opening in airplane (2), equipment malfunction or entanglement (26), failure to pull ripcord until too late (34), mid-air collisions (5), water landing (19), hitting fatal objects (train/power lines, etc.) (4), and others (5). The overall mortality rate between 1956 and 1963 was 87 deaths per 1.12 million jumps (there were an additional 13 deaths in 1964, but no report of the number of jumps). Unfortunately, injuries associated with skydiving are not available from this early period.

From the conversion from T-10 rounds and sub-disciplines Para-Commanders to the first ram-air parachutes of the 1970s to the modern high-performance canopies of today, great strides have been made in parachute technology. Likewise, there have been a number of safety improvements. However, modern parachutes also result in a different set of injuries. Prior to 1993, landing fatalities were uncommon. After 1993, landing fatalities increased to account for a third of all skydiving fatalities in the United States. This increase in landing fatalities is attributed to the popularity of a new generation of high-performance parachutes. Combining a high wing load (the ratio of the exit weight of the skydiver to the surface area of the canopy) with a hook turn, high-performance canopies can be unforgiving when mistakes in handling are made. Hook turns account for a high percentage of fatalities in the United States and are essentially a phenomenon affecting experienced jumpers.
Like the early skydiving literature, much of the recent literature comes from the military, and some of the studies involve a variety of types of parachutes. A summary of more modern studies can be found in Table 16.2.