The rehabilitation protocols described in this chapter consist of a careful incorporation of exercise concepts supported by scientific data and clinical experience.3,14,15,17 The goal is to progress a patient on a rate that takes into account athletic and occupational goals, condition of the articular surfaces and menisci, return of muscle function and lower limb control, postoperative graft healing, and graft remodeling. Modifications to the postoperative exercise program may be required if noteworthy articular cartilage deterioration is found during surgery.

The supervised rehabilitation programs are supplemented with home exercises performed daily. The therapist must routinely examine the patient in the clinic in order to implement and progress the appropriate protocol. Therapeutic procedures and modalities are used as required for successful rehabilitation. For the majority of patients, a range of 11 to 21 postoperative physical therapy visits is expected to produce a desirable result. A few more visits may be required for advanced training between the 6th and the 12th postoperative month for certain patients who desire to return to strenuous activities.

Patients are warned to avoid any exercises or activities that place high posterior shear forces on the tibia such as walking down inclines or squatting for the first 6 postoperative months. In addition, patients are cautioned that an early return to strenuous activities postoperatively carries a risk of a repeat injury or the potential of compounding the original injury. These risks cannot always be scientifically predicted, and patients are cautioned to avoid strenuous activities for 9 to 12 postoperative months and to avoid activities that produce pain, swelling, or a feeling of instability. These patients are monitored after surgery with posterior drawer testing and stress radiography if an increase in posterior tibial displacement is detected.

Patients with posterolateral reconstruction are warned specifically at the 4th to 8th postoperative weeks that, with resumption of weight-bearing and weaning of crutches, to avoid a varus or internal tibial rotation position that could place high tensile forces on the posterolateral structures.13,16 It is important that the patient demonstrates good lower extremity control with suitable muscle strength to maintain tibiofemoral compensation and avoid a lift-off of the lateral tibiofemoral joint, which may disrupt the posterolateral reconstruction.

Kaufman and coworkers8 used a three-dimensional biomechanical model to predict dynamic patellofemoral and tibiofemoral forces generated during isokinetic exercises at 60°/sec and 180°/sec. During isokinetic extension, posterior shear forces were detected at knee flexion angles of 40° and greater. The maximum posterior shear force occurred at 70° to 80° of knee flexion and measured 0.5 ± 0.1 body weight at 60°/sec and 0.6 ± 0.1 body weight at 180°/sec

Ohkoshi and associates19 used a two-dimensional model to calculate shear force exerted on the tibia during standing at various knee flexion angles in 21 healthy subjects. Posterior shear forces were found in the upright position of the trunk and at knee flexion angles of 15° to 90° (Fig. 23-1). At 30° and 60°, the posterior drawer force was significantly increased by anterior flexion of the trunk. 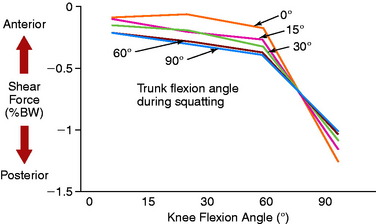 FIGURE 23-1 Calculated shear force (kilograms) per body weight (kilograms) while standing on both legs at various flexion angles of the knee and trunk.

Castle and colleagues4 measured posterior tibial subluxation during a static double-legged squat in patients with PCL-deficient knees. The results revealed a statistically significant mean increase of 5.9 mm in posterior tibial translation (P < .05) of the injured knee compared with the contralateral knee at high knee flexion angles. At low flexion angles, the magnitude of increase in mean posterior tibial translation was only 2.1 mm. Tibiofemoral shear forces were small compared with tibiofemoral joint compression forces.

Berchuck and coworkers2 calculated large posterior shear forces during gait analysis for the activities of jogging, ascending stairs, and descending stairs (Fig. 23-2) in five normal subjects. Lutz and associates9 evaluated tibiofemoral joint shear and compressive shear forces using a two-dimensional biomechanical model and electromyographic (EMG) activity of hamstrings and quadriceps muscle activity during a closed kinetic chain (CKC) leg press exercise, an isometric open kinetic chain (OKC) exercise, and an OKC flexion exercise. Measurements of maximum muscle contractions were obtained at 30°, 60°, and 90° of knee flexion. The OKC isometric flexion exercise produced posterior shear forces at all knee flexion angles (Fig. 23-3), ranging from –939 ± 174 N at 30° of knee flexion to a maximum of –1780 ± 699 N at 90° of knee flexion. The CKC exercises produced significantly less posterior shear forces at 60° and 90° of flexion (–538 N; P < .05). These findings were similar to those reported by Smidt21 during isometric knee extension and flexion exercises (Fig. 23-4). Maximum hamstrings EMG activity was detected during the OKC exercise at 90° of flexion (82 ± 15% of maximum contraction). The antagonistic muscle activity was minimal during this exercise at all knee flexion angles. In contrast, co-contraction of the quadriceps and hamstrings was observed during the CKC exercise, which was greatest at 30° and 60° of flexion. The authors concluded that CKC exercise produced significantly less tibiofemoral shear forces compared with OKC exercise (P < .05). 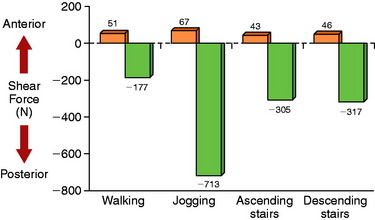 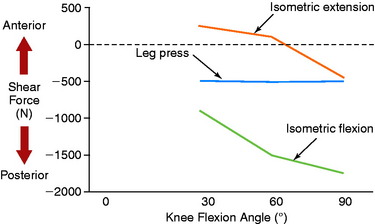 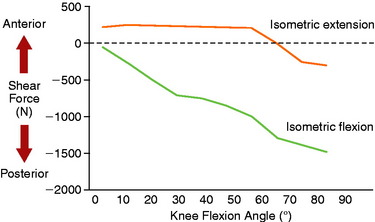 Wilk and colleagues23 evaluated tibiofemoral shear forces and EMG activity of the quadriceps, hamstrings, and gastrocnemius muscles during OKC extension and CKC leg press and squat exercises. Both CKC exercises produced posterior shear forces. However, during the squat, these forces were relatively low (245–565 N) from 0° to 45° of knee flexion. A rapid increase in posterior shear forces was detected from 45° to 72° of flexion. In addition, co-contraction of the quadriceps and hamstrings occurred from 0° to 30° of flexion. The authors concluded that vertical squats from 0° to 45° of flexion should not be performed in knees in the early stages of PCL reconstruction rehabilitation.

Wilk and colleagues23 also found that the knee extension exercise produced posterior shear forces from 60° to 100° of knee flexion; however, these forces were lower than those measured during both CKC exercises. The leg press induced minimal hamstring muscle activity.

Hoher and coworkers7 reported that the in situ forces in the PCL significantly increased with knee flexion in response to an isolated hamstrings load, reaching a maximum at 90° of flexion. These findings were in agreement with other authors5,24 who also reported increased strain in the PCL with knee flexion. The addition of a 200-N quadriceps load (simulating co-contraction of the quadriceps and hamstrings) reduced the in situ forces in the PCL.

Markolf and colleagues10 studied the effects of muscle loads on cruciate force levels when the knee was subjected to external forces and moments. Load cells were installed into cadaveric knees to record forces in the ACL and PCL under five loading conditions. These force measurements were repeated with a 100-N load applied to the quadriceps tendon and with a combined 50-N load applied to both the biceps and the semimembranosus-semitendinosus tendons. 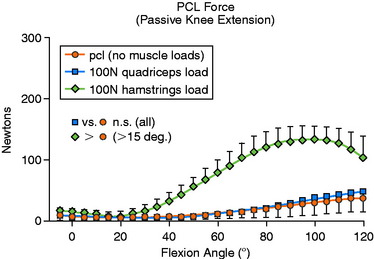 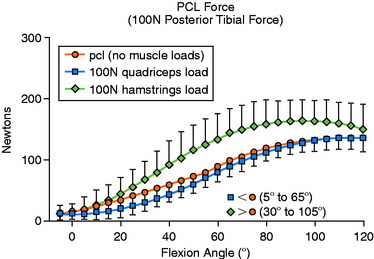 FIGURE 23-6 PCL forces from 0°–120° of knee flexion under a constant 100-N posterior tibial force. Application of a 100-N hamstrings load significantly increased mean PCL force at flexion angles between 30° and 105°.

The rules to treat partial or acute isolated PCL tears are

1 Protect for 6 weeks in full knee extension with a brace and posterior calf pad (Fig. 23-7) or bivalved cylinder cast to maintain tibiofemoral reduction. Use quadriceps isometrics, electrical muscle stimulation (EMS), leg raises, and 25% weight-bearing.
2 Obtain a lateral radiograph to verify that no posterior tibial subluxation exists, which can occur in up to 50% of knees.
3 At 2 weeks, the therapist initiates 0° to 90° of motion, maintaining anterior tibial translation load during knee motion exercises. The patient must sleep in the brace and is not allowed unsupervised knee motion. Only passive flexion is permitted.
4 At 4 weeks, the patient is allowed to perform active quadriceps extension out of the brace, use 50% weight-bearing with crutch support, and continue brace protection.
5 At 5 to 6 weeks, the patient is weaned from the brace and crutch support, active full knee flexion is allowed, and the rehabilitation protocol described later beginning at this time period is followed. 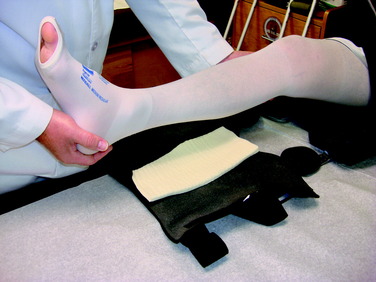 Patients present to physical therapy the 1st day after surgery on bilateral axillary crutches in a postoperative dressing with a long-leg brace locked in full extension (Table 23-1). The postoperative bandage and dressing are changed to allow the application of thigh-high compression stockings and a compression bandage. Early control of postoperative effusion is essential for pain management and early quadriceps reeducation. In addition to compression, cryotherapy is important in this time period. 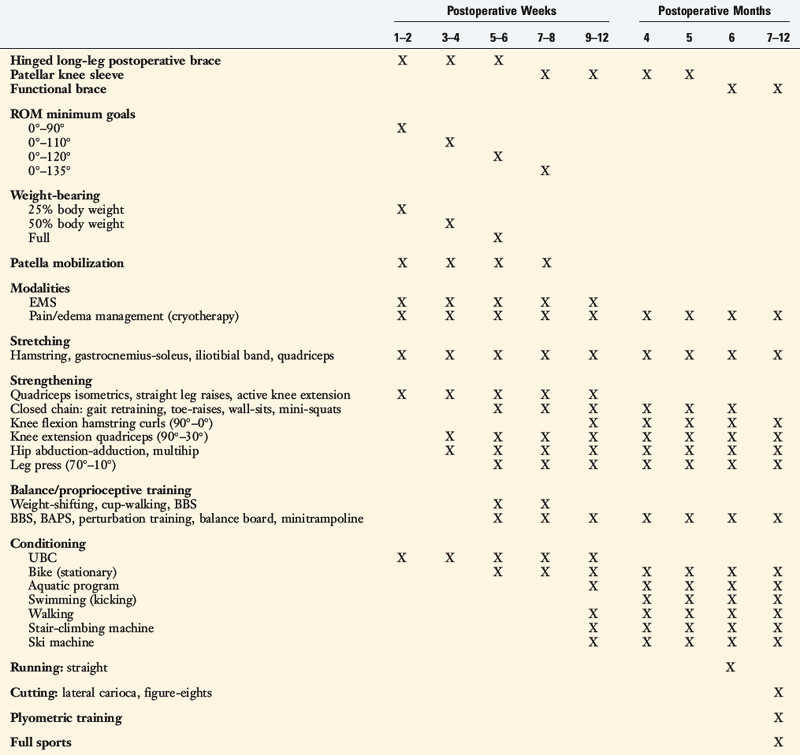 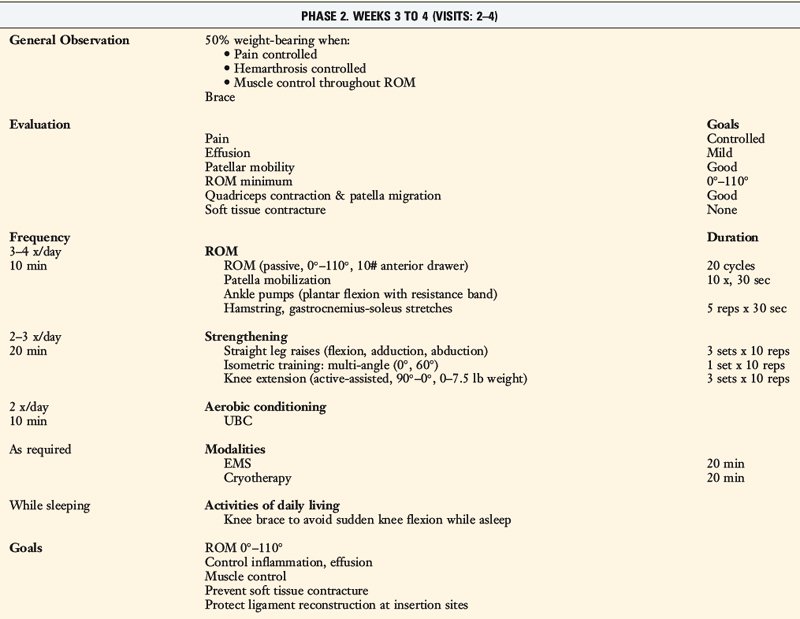 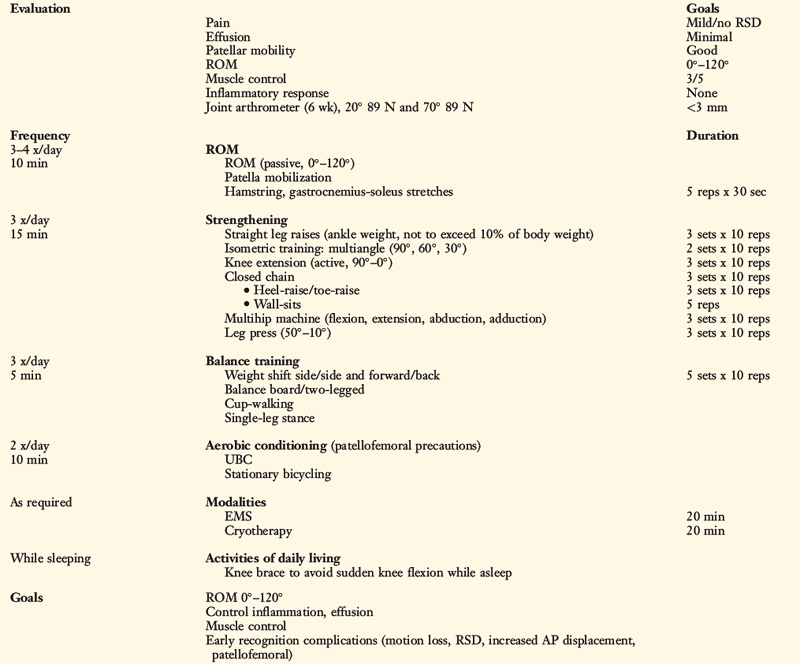 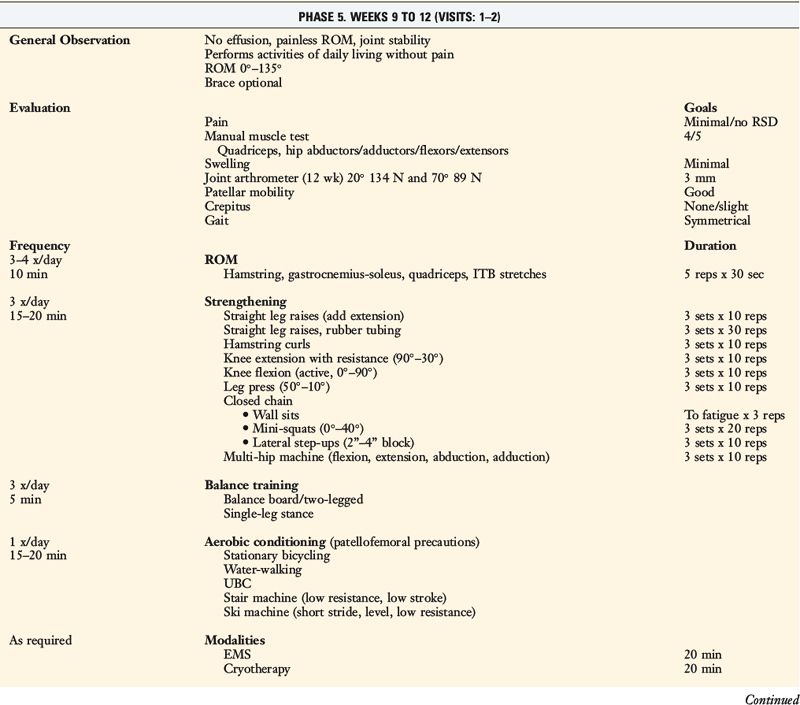 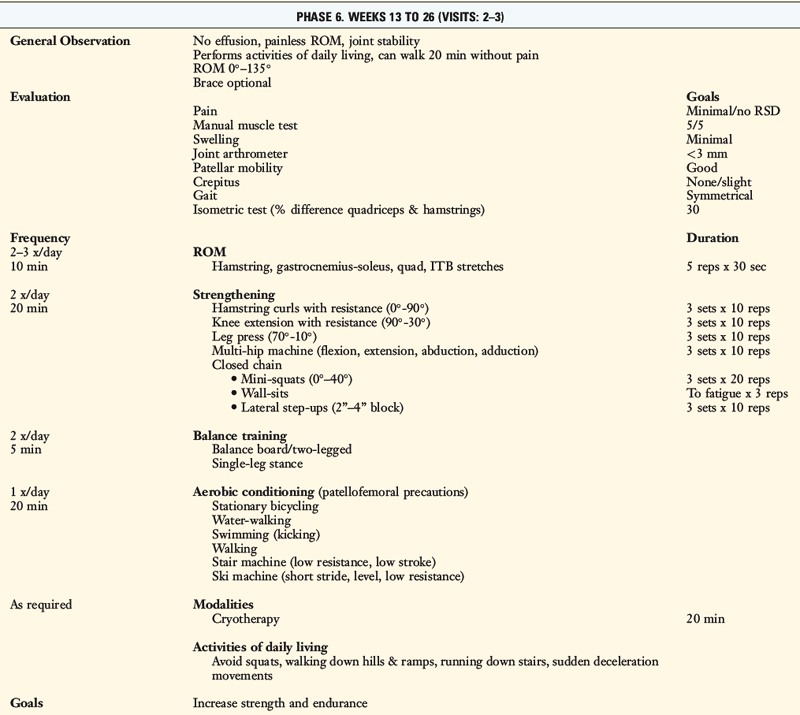 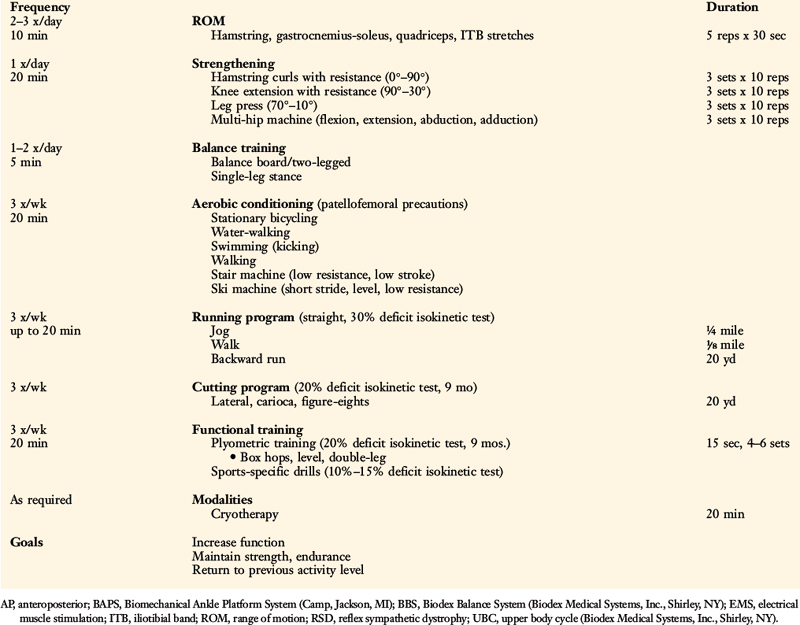 Patients are instructed to keep the lower limb elevated as frequently as possible during the 1st week. The initial response to surgery and progression during the first 2 weeks sets the tone for the initial phases of the rehabilitation program. Common postoperative complications include excessive pain or swelling, quadriceps shutdown, and range of motion (ROM) limitations. Early recognition and treatment of these problems are critical for a successful outcome.

Therapeutic modalities after PCL reconstruction are used as required by the evaluation. If the patient demonstrates a fair or poor rating of the quadriceps or vastus medialis obliquus (VMO) musculature, then EMS is initiated. Electrodes are placed over the VMO and on the central to lateral aspect of the upper one third of the quadriceps muscle belly. The patient actively contracts the quadriceps muscle simultaneously with the machine’s stimulation. Treatment sessions last for 20 minutes. A portable neuromuscular electric stimulator such as the EMPI PV 300 (EMPI, St. Paul, MN) may be helpful in individuals whose muscle rating is poor. This device is used six times per day, 15 minutes per session, until the muscle grade is rated as good.

Biofeedback therapy is also quite useful in facilitating quadriceps muscle contractions. The surface electrode is placed over the selected muscle component to provide information to the patient and clinician regarding the quality of active or voluntary quadriceps contraction. This modality can enhance relaxation of the hamstring musculature if the patient has difficulty achieving full knee extension owing to knee pain or muscle spasm. The electrode is placed over the belly of the hamstring muscle while the patient performs ROM exercises.

Cryotherapy is begun in the recovery room after surgery. Several different modalities are available for use in both the clinic and the home settings. Clinically, devices such as the Game Ready (Game Ready, Berkeley, CA) cryotherapy machine are used to provide compression simultaneously with the cold program. For most patients, cryotherapy is accomplished with an ice bag or commercial cold pack. Patients also receive a commercial cooling unit, which is used six to eight times daily at home. Other commercially available cold therapy units include motorized cooler units that maintain a constant temperature and circulation of ice water through a pad that provides excellent pain control. Gravity-flow units also provide effective pain management; however, the maintenance of a constant temperature is more difficult with these devices. The temperature can be controlled by using gravity to backflow and drain the water, refilling the cuff with fresh ice water as required. Standard treatment times are 20 minutes in length, performed from three times a day to every waking hour depending upon the extent of pain and swelling. In some cases, the treatment time can be extended based on the thickness of the buffer used between the skin and the device. Cryotherapy is typically used after exercise or when required for pain and swelling control and is maintained throughout the entire postoperative rehabilitation protocol.