The posterior and lateral anatomy of the knee joint presents a challenge to even the most experienced knee surgeon. Knowledge of the bony topography will result in a greater number of anatomic ligament reconstructions (Fig. 2-1). A lack of familiarity leads to hesitancy when performing approaches in these areas of the knee. The inherent anatomic complexity of this region is further complicated by variations in terminology found in the orthopaedic literature. Work by LaPrade and coworkers23,24,26 and others have attempted to clarify the nomenclature used to describe these structures, allowing for better communication among surgeons. These advances also facilitate more accurate biomechanical studies. 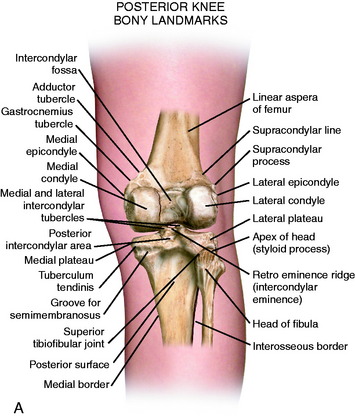 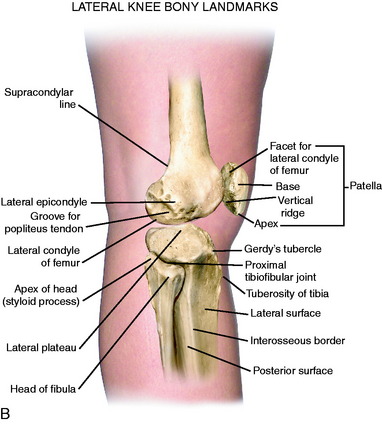 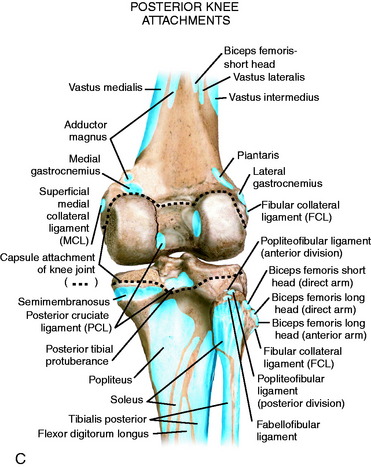 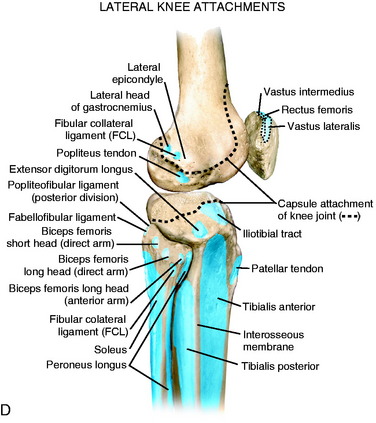 The iliotibial band (ITB) is a large fascial expansion that originates on the anterior superior iliac spine, covering the tensor fascia lata muscle proximally and extending along the lateral aspect of the thigh. Distally, the ITB has been divided into three separate layers: superficial, deep, and the capsulo-osseous layer.50,64 A portion of the superficial layer, called the iliopatellar band, extends anteriorly to the lateral aspect of the patella (Fig. 2-2).62 This band is important for proper patellofemoral tracking by resisting abnormal medial patella translation (medial glide).23 The majority of the superficial layer continues distally to insert on Gerdy’s tubercle. The deep layer connects the medial portion of the superficial layer to the lateral intermuscular septum of the distal femur. The most distal fibers of the deep layer continue to attach to the posterior aspect of the lateral femoral condyle (Fig. 2-3).64 The capsulo-osseous layer extends more medial and distal to the deep layer to merge with fibers from the short head of the biceps to form the biceps–capsulo-osseous iliotibial tract confluens.63 The capsulo-osseous layer continues distally, creating a sling posterior to the lateral femoral condyle to attach posterior and proximal to Gerdy’s tubercle. 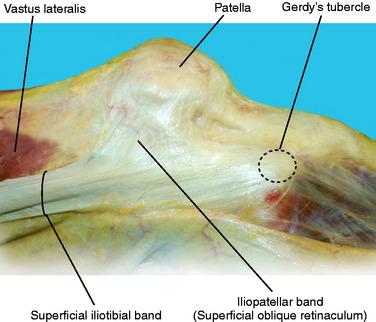 FIGURE 2-2 Lateral aspect of the knee demonstrates the iliotibial band (ITB) with its distal insertion on Gerdy’s tubercle and the iliopatellar fibers. 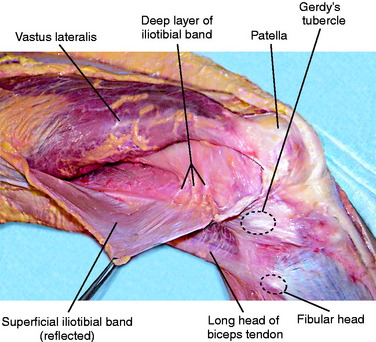 FIGURE 2-3 Deep fibers of the ITB are exposed as the superficial ITB is split and retracted posteriorly.

In knee extension, the ITB is anterior to the axis of rotation and helps maintain extension. When the knee is flexed to 90°, the ITB moves posterior to the axis of rotation. The anteroposterior (AP) position of the ITB with knee flexion contributes to the pivot shift phenomena with an anterior cruciate ligament (ACL) rupture.16 The posterior portion of the ITB tibiofemoral attachment is re-created in the lateral extra-articular ACL reconstruction.23,50 During flexion, the ITB moves posteriorly, exerting an external rotational and posteriorly directed force on the lateral tibia, contributing to the reduction in the pivot shift test. The ITB and lateral capsule are important structures that resist internal tibia rotation (see Chapter 3, The Scientific Basis for Examination and Classification of Knee Ligament Injuries). In extension, the ITB acts as a secondary restraint to varus stress.3 In severe lateral knee ligament injuries, the ITB may become abnormally lengthened, and at the time of surgery, distal advancement at Gerdy’s tubercle is indicated. A bursa between the ITB and the lateral femoral epicondylar region may become inflamed and produce pain. The lateral retinacular nerve courses just posterior to the bursa and may also become symptomatic.

For this chapter, the term fibular collateral ligament has been selected instead of lateral collateral ligament because it represents the term most commonly used in anatomy textbooks23,55 and several studies.22,26,28,58,68,70 The FCL is a cordlike ligament that runs from the lateral femoral epicondyle to the fibular head (Fig. 2-4). When performing an anatomic FCL reconstruction, it is imperative that the surgeon understands the relationship of the FCL to its surrounding structures. On the femur, the FCL originates approximately 14 mm anterior26 and slightly distal to the attachment of the lateral gastrocnemius tendon. This tendon is a key landmark during FCL reconstruction because it is frequently spared during a posterolateral corner knee injury.64 In addition, the FCL attaches proximal and posterior to the popliteus femoral insertion. Distally, it attaches to the lateral aspect of the fibular head just medial to the anterior arm of the long head of the biceps tendon. 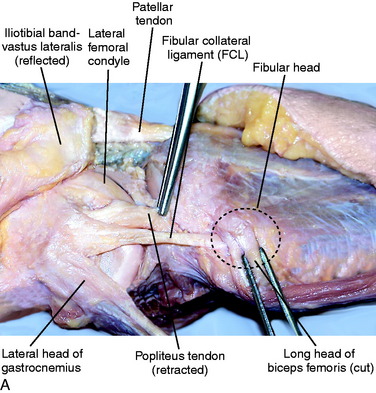 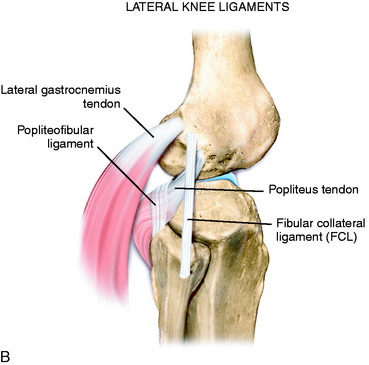 In 2003, LaPrade and associates26 published a quantitative anatomic study that described the FCL and its relationship to osseous landmarks and other posterolateral structures of the knee. These authors reported that the FCL does not originate directly off of the lateral epicondyle, but attaches approximately 1.4 mm proximal and 3.1 mm posterior to the epicondyle, residing in a small bony depression. The average distance between the FCL and the popliteus attachments on the femur was 18.5 mm. The ligament travels distally to insert 8.2 mm posterior to the anterior margin of the fibular head and 28.4 mm distal to the tip of the fibular styloid process (Fig. 2-5).26 The distal 25% of the FCL is surrounded by the FCL–biceps femoris bursa, which has been implicated as a possible source of lateral knee pain.10 The bursa is covered by the anterior arm of the long head of the biceps.24 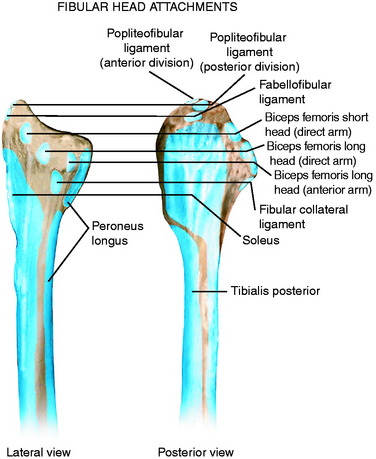 FIGURE 2-5 Lateral view of the knee demonstrates the FCL insertion onto the proximal fibula distal to the fibular styloid.

The FCL is the primary restraint to varus loads at all degrees of flexion.11 In a cadaveric sectioning study, Grood and colleagues11 reported that the limit for varus angulation was normal as long as the FCL was intact. In addition, for large changes in external rotation to occur, the popliteus tendon, PFL, posterolateral capsule, and the FCL must all be injured.67 Thus, the FCL provides significant resistance to external rotation. The FCL is a secondary restraint to internal rotation at higher flexion angles (see Chapter 3, The Scientific Basis for Examination and Classification of Knee Ligament Injuries). 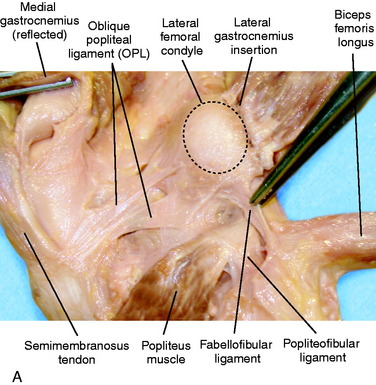 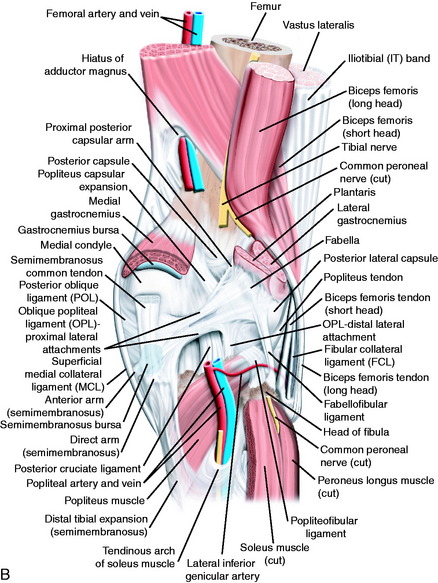 The fabella, or “little bean,” is a bony or cartilaginous structure nestled in the posterolateral aspect of the knee. It is generally believed to reside in the tendon of the lateral head of the gastrocnemius; however, many structures merge at the fabella (Table 2-1). The fabella ranges in size from approximately 5 mm to over 20 mm in diameter, with the majority (70%) being oval in shape.36,46 There are varying reports on the incidence of the fabella. Earlier radiographic studies appear to underestimate the true prevalence of the fabella compared with more recent cadaveric and histologic studies (Table 2-2). This structure is present bilaterally in approximately 80% of cases. The fabella has been implicated as a cause of posterior knee pain in multiple conditions including chondromalacia fabella, “fabella syndrome,” fracture of the fabella, impingement after total knee arthroplasty, and peroneal nerve irritation.8,10,29,32,33,49,66 Thus, the fabella and surrounding structures represent a rare but potential source of posterolateral knee pain.

TABLE 2-1 Structures That Coalesce at the Fabella 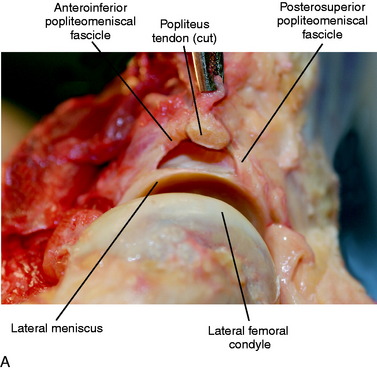 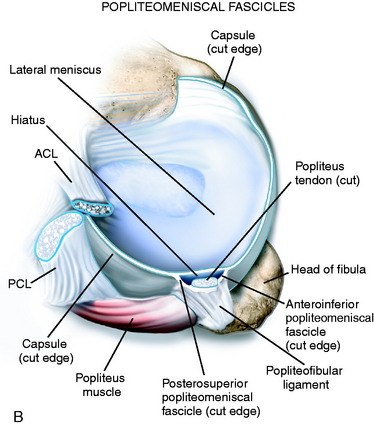 LaPrade and colleagues27 described a thickening of the posterior joint capsule that extends from the medial aspect of the popliteus musculotendinous junction to the posteromedial aspect of the intercondylar notch of the femur, termed the proximal popliteus capsular expansion (see Fig. 2-6B). The study reported this structure to be present in all dissections, and the authors of this chapter have also found it to be a constant structure. This structure may provide an additional restraint to knee external tibial rotation and hyperextension.

The PFL originates at the musculotendinous junction of the popliteus and attaches to the medial aspect of the fibular head (Fig. 2-8), where it lies deep to the fabellofibular ligament. Of clinical significance, the inferior lateral geniculate artery courses between these two structures. The artery is frequently encountered during exposure of the posterolateral corner of the knee, especially during the approach for an inside-out lateral meniscus repair (Fig. 2-9). The artery is protected, if possible, and, if injured, requires cauterization to prevent postoperative hematoma formation. The PFL consists of two divisions, an anterior and a posterior division.26 LaPrade and associates26 found that the average width of the anterior division’s attachment at the fibular styloid was 2.6 mm, and the posterior division’s width at the fibular styloid attachment was 5.8 mm. Thus, the posterior division may contribute more significantly than the anterior division to stability of the posterolateral aspect of the knee. 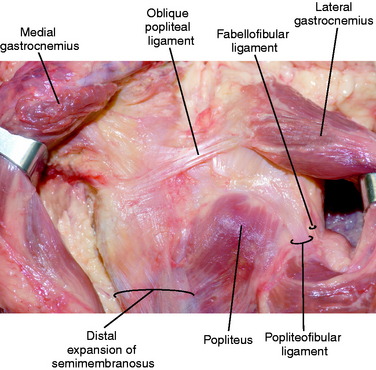 FIGURE 2-8 The popliteofibular ligament originates from the popliteus muscle and attaches to the medial aspect of the fibula. The lateral head of the gastrocnemius is being retracted proximally. 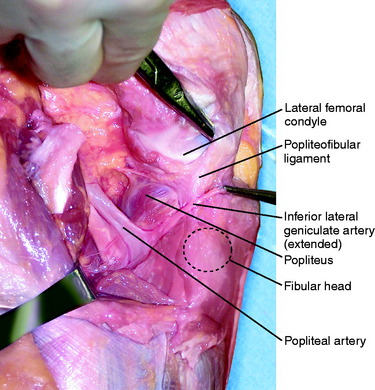 The biceps femoris is a fusiform muscle comprising two heads: long and short. The long head originates from the ischial tuberosity and is innervated by the tibial division of the sciatic nerve. The short head originates from the lateral aspect of the linea aspera of the femur and is innervated by the peroneal division of the sciatic nerve.50 Distally, the two heads of the biceps lie just posterior to the ITB (Fig. 2-10). Both heads of the biceps have complex attachments to the posterolateral aspect of the knee. These distinct attachments are described and shown in Tables 2-3 and 2-4. In the authors’ experience (in cadaveric dissections and at surgery), many of the attachments blend together distally and are difficult to identify as separate structures. The peroneal nerve lies just distal and posterior to the biceps, curving around the fibular neck. The biceps flexes the knee and also externally rotates the leg when the knee is flexed.51 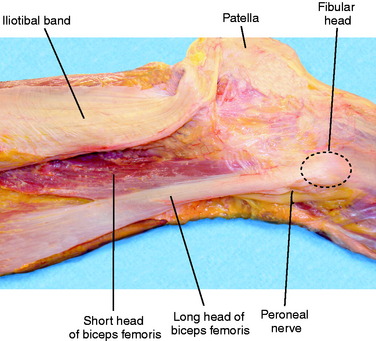 FIGURE 2-10 The ITB is retracted superiorly demonstrating the short head of the biceps attaching to the long head tendon and inserting onto the fibular head. The peroneal nerve is seen posterior to the biceps.