Pygeum africanum is an evergreen tree native to Africa that can grow to a height of 120 to 150 ft. It has pendulous branches with thick, oblong, leather-like, mat-colored leaves and creamy white flowers. The fruit (drupe) resembles a cherry when ripe. The dark brown to gray bark of the trunk is the part used for medicinal purposes.

The major active components of the bark are as follows: 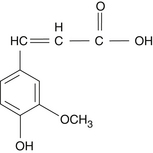 The pentacyclic triterpenic components are ursolic acid (Figure 118-2), oleanolic acid, crataegolic acid, and their derivatives. The sterolic fraction is composed mainly of β-sitosterol and β-sitosterone (Figure 118-3). The fatty acids range from C12 to C24 and the important ferulic acid esters are those bound to n-tetracosanol and n-docosanol.1–4 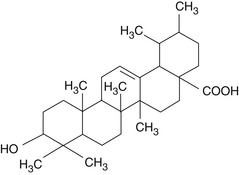 The powdered bark of P. africanum was used by the natives of tropical Africa as a treatment for urinary disorders. It was often given with palm oil or milk. Since about 1970, the bark has been entirely wild-collected, with the major exporters being Cameroon, Madagascar, Equatorial Guinea, and Kenya. Two companies, Groupe Fournier of France and Indena of Italy, produce 86% of the world’s bark extract, both for their own products and for the free market. Worldwide exports of dried bark in 2000 were estimated at 1350 to 1525 metric tons per year, down from its peak of 3225 tons in 1997. Bark extracts (6370 to 7225 kg/year) are worth an estimated $4.36 million U.S. dollars per year. However, wild collection of the bark is no longer sustainable. Since 1995, P. africanum has been declared an endangered species. Alternatives to wild collection to meet future market demand include conservation practices, enrichment plantings, and small- and large-scale production. Currently, the species is at the beginning of a transition from an exclusively wild-collected species to that of a cultivated medicinal tree.5

Pharmacologic screening of various extracts prepared with solvents of differing degrees of polarity indicated that the highest activity was found in lipophilic extracts.1 This finding is interesting in light of pygeum’s historical administration in lipophilic media (palm oil or milk). Virtually all of the pharmacologic research featured a pygeum extract standardized to contain 14% triterpenes, including β-sitosterol and 0.5% n-docosanol. This extract was extensively studied in both experimental animal studies and clinical trials with humans.

The primary target organ for pygeum’s effects in men is the prostate. The three major active components of pygeum appear to exert different, yet complementary, effects in benign prostatic hyperplasia (BPH). In addition, pygeum was shown to enhance the secretions of the prostate and bulbourethral glands, in terms of both quantity and quality.

The esters of ferulic acid act primarily on the endocrine system. Studies in animals showed docosanol reduced levels of luteinizing hormone and testosterone while raising adrenal steroid secretion of both adrenal androgens and corticosteroids.6,7 Docosanol also significantly lowers serum prolactin levels. This reduction of prolactin is quite significant, because prolactin increases both the uptake of testosterone and the synthesis of dihydrotestosterone within the prostate. The accumulation of testosterone within the prostate and its subsequent conversion to the more potent dihydrotestosterone is thought to be the major contributing factor to the hyperplasia of the prostatic cells observed in BPH.8 Although traces of docosanol are present in pygeum, the esterification with ferulic acid results in greater bioavailability and activity.2,4,9

The sterolic fraction is also endowed with competitive action against testosterone accumulation within the prostate. In addition, the sterols of pygeum were also shown to reduce inflammation by preventing the intraprostatic formation of inflammatory prostaglandins.9,10

Other components of pygeum are also important. For example, the pentacyclic triterpenes exhibit anti-inflammatory effects within the prostatic epithelium and may be responsible for stimulation of the secretory cells of the prostate, seminal vesicles, and bulbourethral glands.9–11 Finally, the fatty acid components are similar to those of Serenoa repens (see Chapter 122) and may exert similar effects as well as improve the oral bioavailability of other components of the lipophilic extract.

The pharmacologic actions of the standardized pygeum extract support its use in prostate disorders, BPH in particular. Adding further support are the results of numerous clinical trials in more than 600 patients.12–34 These studies consistently demonstrated that pygeum effectively reduces the symptoms and clinical signs of BPH, especially in early cases. However, it must be pointed out that improvement is largely symptomatic, because the reductions in size of the prostate and in residual urine content of the bladder are modest. The results of the clinical trials on pygeum are given in Table 118-1. A discussion of some of the most important aspects of these studies follows. 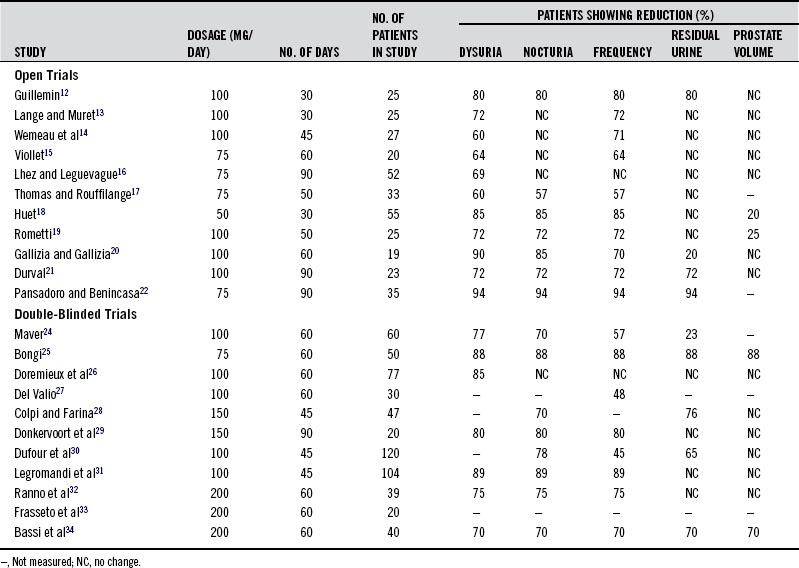