Grape seed and pine bark PCO extracts are well defined chemically. Grape seed extracts are available that contain 92% to 95% PCOs, whereas the PCO content of pine bark extracts varies from 80% to 85%. Proanthocyanidin B2 is shown in Figure 117-1. 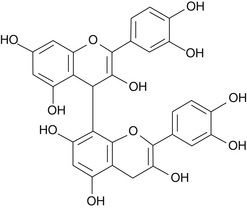 In 1534, French explorer Jacques Cartier led an expedition up the Saint Lawrence River in what would become North America. Trapped by ice, Cartier and his crew were forced to survive on a ration of salted meat and biscuits. Cartier’s crew began to exhibit signs and symptoms of scurvy, the cause of which was unknown at that time. Fortunately for Cartier and the surviving members of his crew, they met a Native American who advised them to make a tea from the bark and needles of pine trees. As a result, Cartier and his men survived.

More than 400 years later, Professor Jacques Masquelier of the University of Bordeaux, France, read the book Cartier wrote detailing his expedition. Intrigued by Cartier’s story, Masquelier and others concluded that pine bark must contain some vitamin C as well as bioflavonoids, which can exert vitamin C–like effects.

Masquelier termed the active components of the pine bark pycnogenols.1,3 This term was used to describe an entire complex of proanthocyanidin complexes found in a variety of plants, including pine bark, grape seeds, lemon tree bark, peanuts, cranberries, and citrus peels. The term pycnogenol has been replaced in the scientific community by the terms proanthocyanidins, OPC, and PCO. In the United States, Pycnogenol is a registered trademark of Horphag Ltd of Guernsey, United Kingdom, and refers to the PCO extracted from the bark of the French maritime pine.

Masquelier patented the method of extracting PCOs from pine bark in France in 1951 and from grape seeds in 1970. The two PCO sources have volleyed back and forth in popularity based largely on which one is receiving research focus and marketing support.

Extracts of PCOs demonstrate a wide range of activity as listed in Box 117-1. Pharmacokinetic studies showed that proanthocyanidins and other breakdown products of PCOs from either grape seed extract or maritime pine are detectable in the serum after oral intake.4,5 Pharmacokinetic studies in humans and animals given C14-labelled PCOs also showed efficient oral absorption.6,7

Data from references 1 and 2.

One study evaluated the free radical scavenging activity of PCOs and determined their inhibitory effects on xanthine oxidase (a primary generator of oxygen-derived free radicals) and the lysosomal enzyme system (which governs the release of enzymes that can damage the connective tissue framework acting as a protective sheath around capillary walls).8 This research, summarized in Box 117-2, provides a detailed explanation of the vascular protective action of PCOs and a strong rationale for their use in vascular disease.

In experimental models, the antioxidant activity of PCOs is much greater (approximately 50 times) than that of vitamin C and vitamin E. PCOs reduce lipid peroxidation9 and oxidation of low-density lipoprotein (LDL),10 increase basal levels of α-tocopherol in endothelial cells, protect endothelium from oxidative stress induced by reactive nitrogen species,11,12 and protect endothelial cells from activated macrophage-induced glutathione depletion.13 From a cellular perspective, one of the most advantageous features of PCOs’ free radical scavenging activity is that, because of their chemical structure, they are incorporated into cell membranes. This physical characteristic, along with their ability to protect against both water- and fat-soluble free radicals, provides significant cellular protection against damage by free radicals.8

Collagen, the most abundant protein of the body, is responsible for maintaining the integrity of ground substance as well as the integrity of tendons, ligaments, and cartilage. Collagen is also the support structure of the dermis and blood vessels. PCOs are remarkable in their effects of supporting collagen structures and preventing collagen destruction. They affect collagen metabolism in several ways. They have the unique ability to cross-link collagen fibers, resulting in reinforcement of the natural cross-linking of collagen that forms the so-called collagen matrix of connective tissue.14,15 They also protect against free radical damage with their potent antioxidant and free radical scavenging action, and they inhibit enzymatic cleavage of collagen by enzymes secreted by leukocytes during inflammation and microbes during infection.8,16 PCOs also prevent the release and synthesis of compounds that promote inflammation and allergies, such as histamine, serine proteases, prostaglandins, and leukotrienes.1,2,17,18

In vitro and in vivo studies showed PCOs significantly inhibit cyclooxygenase (COX-1) and COX-2 enzymes as well as the formation of proinflammatory cytokines, interleukin-1β, and tumor necrosis factor-β, as well as histamine release from mast cells.19–22 When 10 volunteers received a single dose of 300 mg Pycnogenol, within 30 minutes serum samples showed statistically significant inhibition of both COX-1 and COX-2 (P <0.002). Blood samples before and after 5 days administration of 200 mg Pycnogenol to five healthy humans showed similar inhibition.

PCOs also significantly lower C-reactive protein (CRP), a major risk factor for cardiovascular disease. In a double-blind study, 29 subjects in the Pycnogenol group and 26 patients in the placebo group had CRP levels higher than 3 mg/L at baseline.21 After 3-month treatment with Pycnogenol, at a dose of 100 mg/day, CRP significantly decreased plasma free radicals to 70.1% of baseline values. Specifically, plasma CRP levels decreased from 3.9 mg/L at baseline to 1.1 mg/L in the Pycnogenol group, whereas the control group had initial values of 3.9 mg/L that decreased to 3.6 mg/L. Fibrinogen levels were found to be lowered to 62.8% of initial values in the Pycnogenol group.

The primary clinical applications of PCOs are in the treatment of the following conditions:

PCOs exert broad-spectrum antioxidant activity and are clinically useful in many health conditions because of this action alone. In healthy human subjects, supplementation with PCOs for 6 weeks was shown to considerably improve the plasma oxygen radical absorbance capacity score (ORAC).28 In one double-blind study, the effect of a standardized formulation of a PCO bound to phosphatidylcholine (Leucoselect-Phytosome) was determined on susceptibility of LDL to oxidation in a group of heavy smokers.34 Among oxidative indexes, the concentration of thiobarbituric acid reactive substances was significantly reduced in subjects taking the PCO extract, and the lag phase was prolonged compared with the values in subjects taking placebo, as well as with baseline values.

In a double-blind, placebo-controlled study in 101 elderly participants (60 to 85 years), consuming a daily dose of 150 mg of Pycnogenol for 3 months produced significant improvements in several memory-based cognitive assessments and lipid peroxidation products (F2-isoprostanes) relative to the control group.35