Position of the newborn in the crib (a). One way of alternating posture is to change the head-feet orientation periodically (b)

The proposal mainly encouraged by the AAP and by many authors is the “tummy time,” i.e., the prone position monitored during waking moments.
A lot of parents, understandably concerned about SIDS, hesitate to place their child prone, even while the infant is awake and supervised [15]. Parents may have overinterpreted the recommendations on SIDS prevention, which do not include avoiding the prone positioning during the day [10].
The prone position (tummy time) is much encouraged by the AAP [19], which recommends that parents hold the newborn resting on the abdomen when it is awake and supervised for a minimum of 30 min to a maximum of 60 minutes per day [20] to prevent the development of flattened areas of the occipital bone while at the same time facilitating the control of the head starting in the first days after birth.
It is argued that 15 min of tummy time a day may make a difference in motor milestone acquisition [3].
Often, however, children do not like the prone position especially if they are used to sleeping supine. In order to facilitate the adaptation to prone position, the infant should be placed, when awake, stomach-side down several times daily and kept under parental supervision. It is advisable to start with short periods, gradually increasing the time, since it is very important to make tummy time acceptable to the child [3, 13].
The prone position while awake, or “tummy time,” should become a part of the child’s everyday life. In prone position, head control helps the straightening antigravity reflex, critical for developing vertical integration starting from the head [21]. Without adequate prone time, the antigravity motor pattern may be underdeveloped [3].
Head control from a prone position also facilitates the straightening of the shoulder girdle and allows the child to rest on the forearms. The straightening then reaches the lower back so that the child can free its arms while propping on its hands. Thereafter, the baby will be able to support the load on one side only, thus having the possibility to use the other limb for playing or moving [22] (Fig. 6.2).

Head control in prone position. Developmental progression of head control and straightening of the shoulder girdle: at 2 months, infants can hold up their heads (a); at 3 months, they can prop on their forearms (b); at 4 months, they can raise their heads and torso more easily (c); at 5 months, they can raise one arm while propping (d)
Parents need to be aware that infants who sleep supine initially may not like to be in the prone position [3, 13, 22, 23]. They may fuss and carry on, which can be distressing to parents. Prior knowledge of the possibility of this occurrence will decrease parental distress as well as potentially increase compliance in providing prone playtime [3].
Parents need to be aware of the importance of prone position, without feeling discouraged by the initial difficulties. They should however be guided to choose the best suited method for each child, taking into account its motor skills and needs related to its developmental stage.
Spending prone time looking at the floor when compared to their parents’ faces or stimulating toys can be frustrating to an infant. Parents can promote comfort in a prone position with a new infant by placing themselves down on the floor or within eye level of their infants, providing pleasant and engaging stimulation [3].
Parents should be informed that, developmentally, the majority of infants are unable to sustain lifting their chins while in the prone position until 1 month of age [3]. Nevertheless, they should have to be guided in choosing the right approach to the child taking into account its motor ability and its developmental needs (Fig. 6.3).

Zero to two months. Awake prone position, already possible in the first 2 months of life: the proposed position, through bodily contact with the parent, fosters the attachment process while providing the first antigravitational experiences. Place the baby’s tummy to the parent’s tummy (or chest), in order to make eye contact and facilitate bonding (a). Awake prone position sustained by visual contact with the caregiver, possible starting from 2 months of age. Putting a small rolled fiber under the child’s chest at armpit level could make keeping the position easier (b) (Cabrera-Lennartsson). Awake prone position during play activities supported by an adult, possible starting around 4 months on a mat where the child can play on him/her back and turn to the side to roll, making the first experiences of the space that it will later explore (c). It is advisable that parents stay on the floor together with their child (d)
Prone position in an early development stage can be detrimental to the interaction with the environment because it is too demanding at the motor level, especially in infants who have greater difficulty in controlling the head. The head’s antigravity function can also be stimulated during the first period of life by the way in which caregivers hold the baby in their arms. Keeping the baby in one’s arms in the early developmental stages represents a method widely used by parents and is appropriate to developmental needs and the promotion of the attachment process (Figs. 6.4 and 6.5). 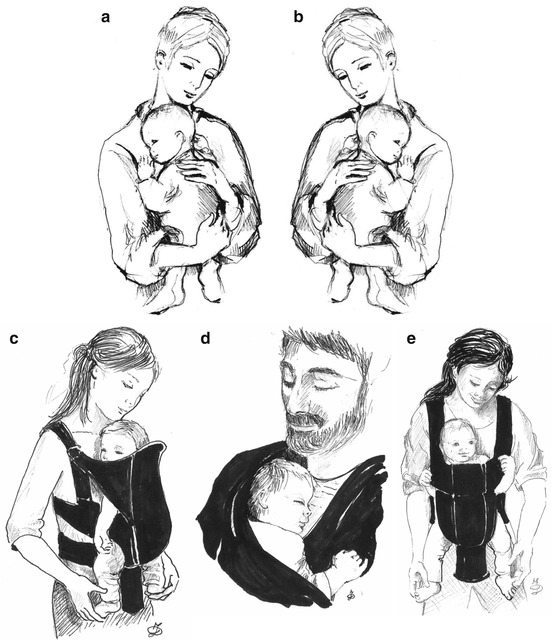 Holding. Alternating the newborn’s position while holding it in one’s arms (a, b) promotes the straightening of the head in the earliest developmental stages and the possibility to develop active rotation to both sides. This position can also be proposed with the use of a baby sling or pouch (c, d) (Davidson). Sling or pouch could be turned inside out (e), starting from about 4 months of age, when the child becomes more curious toward the environment [24]

Tummy-down carry. Carry the baby from room to room using a “tummy-down” carry, making sure to snuggle the baby close to your body for security (a). Lap soothe: place your baby facedown across your lap to burp or soothe him/her. A hand on your baby’s bottom will help steady and calm (b) your baby on your lap while sitting with flexed legs to chat with him/her looking each other into the eyes (c)
In the early developmental stages, the support of the head on the parent’s shoulder (Fig. 6.6) or the “wrapping” (Fig. 6.7) is the first way to control the head even for the newborn, favoring a good fixation of the trunk and of the shoulders. 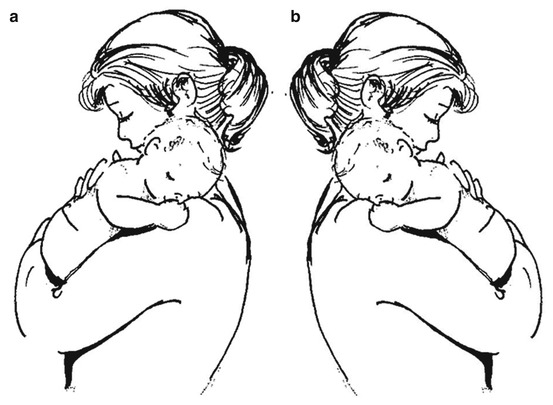 In the early developmental stages, the support of the head on the parent’s shoulder is the first way to control the head even for the newborn, favoring a good fixation of the trunk and of the shoulders. Alternate both sides, left (a) and right (b) 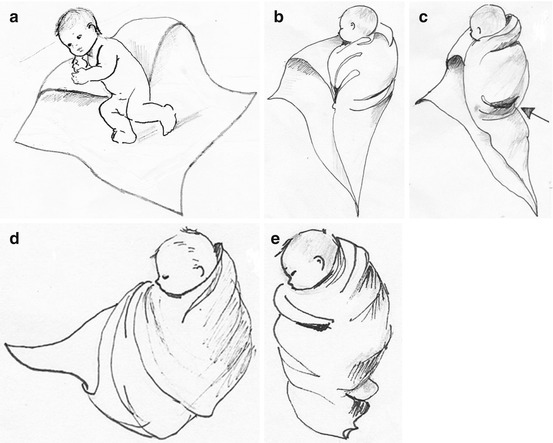 The “wrapping” is a good alternative to the support of the head on the parent’s shoulder. Consecutive wrapping steps are shown starting from (a) and ending to (e)
To increase head control and improve visual exploration as well, it is useful to propose, already from birth, the semi-sitting position with 30–40° of tilt [23] in properly adjusted seats [25, 26]. From the fourth month of age onward, the tilt can be reduced to around 10°/15° [22] (Fig. 6.8). At this time the use of Bumbo-type seats can also be considered [13] (Fig. 6.9). All types of seats must be used during wakefulness only. Excessive use of car seats should be avoided. On the contrary, they should be employed only for transport [1, 6, 18, 23, 24, 27]. Appropriate use of different pediatric devices that respect the child’s development stages and their time of use can facilitate neurobehavioral development [25]. 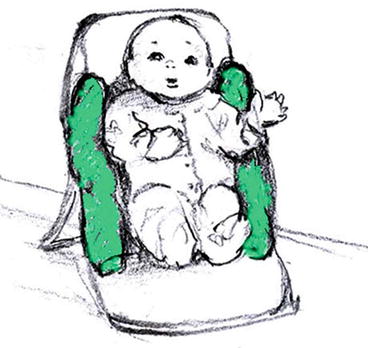 Semi-seated posture. To maintain a correct semi-seated posture, put rolled-up towels at the sides of the newborn’s torso, from the shoulders to legs, leaving the head free to move in all directions to enable exploration of the environment and participation in family life [24] 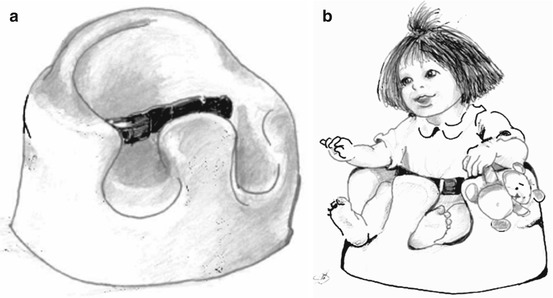 At this time the use of Bumbo-type seats can also be considered
While positioning on the side is not permitted during sleeping, it may be recommended during periods of wakefulness. In the early periods of life, in fact, the supine position is not very compatible with the baby’s skills, since they are not yet able to organize their bodies across the midline and show signs of postural and motor instability.
Positioning on the side [3, 16, 22] gives the advantage of distributing the load on the two sides of the body, facilitating midline movement organization (hand-to-mouth activities, fine motor skills, and midline play and reaching) promoting neurodevelopment (Fig. 6.10).

Pillow (a). A pillow made by two triangular structures joined by a strip of fabric can be used when the child is awake to provide a stable side posture (b)
The active repositioning of the head, i.e., the voluntary excursion through the whole range of motion, could be proposed in all positions (supine, prone, and on one side) and can also be facilitated by attractive visual and auditory stimuli, primarily parents’ faces and voices, and high-contrast images that promote visual tracking from the less used side.
Only gold members can continue reading. Log In or Register to continue