Carved head of Queen Nefertiti. Note the intentional deformation of the skull in the anteroposterior direction and vertical (Redrawn from the original artwork by Fernanda Daris)

In Europe, the custom of deforming the skull was widespread, especially during the High Middle Ages (eleventh to thirteenth centuries). Skulls artificially deformed were found in Romania, ex-Yugoslavia, Hungary, Czech Republic, Slovakia, Austria, Russia, Finland, Switzerland, Italy, and France. Information on people who followed this practice can be obtained from renaissance studies. Although short and fragmentary, they provide rich information on ancient and medieval sources and relate them to the modern era, which has seen growing anthropological interest in the subject.
Examples of cranial deformation among Italian and French aristocracy are also highlighted in portraits of the time, showing how a conical shape of the skull, obtained by rigid bandages applied since childhood, was particularly appreciated and sought after (Fig. 1.2). 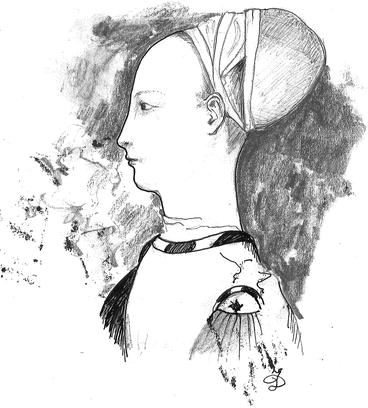 Portrait of principessa. The portrait by Pisanello (between 1436 and 1438) at the Louvre Museum in Paris highlights the conical shape of the skull of the lady, presumably Ginevra d’Este (Redrawn from the original artwork by Fernanda Daris)
Historically, cradleboards and other external pressure devices have been intentionally used to mold children’s skulls into desirable shapes to signify high social status, ethnicity, or both [8].
Valuable information concerning the practice of the artificial deformation is reported in the writings of the “Indias Cronistas,” compiled during the Spanish conquest, and also in the famous “Comentarios reales de los Incas” by Inca Garcilaso de la Vega, written between 1590 and 1604. In these writings we can find references to how some cranial deformities were used to distinguish members of the nobility, encouraging common people to implement the same practice to obtain some sort of social promotion. It was also believed that a flattened front of the head promoted docility in children. Through these writings we learn that Amerindian peoples deformed the head of infants as soon as they were born, using two tablets placed respectively on the forehead and on the nape of the neck, pressed against each other by ties. These tablets were used to compress the baby’s head until he had reached the age of 4, thereby flattening and widening the skull. The effect of the deformation was then amplified by shaving the head, leaving hair only at the sides. The remaining hair was not combed or smoothed, but left frizzy and bristling to increase the monstrosity of the faces (Fig. 1.3). 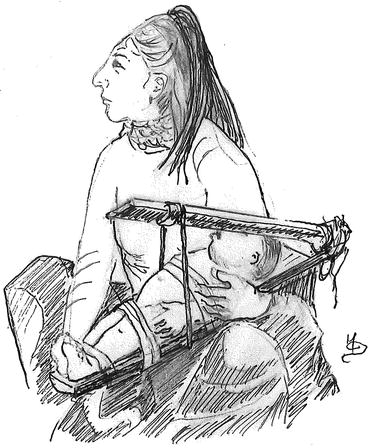 Amerindian woman carrying her child on a rigid tablet, compressing the skull with an adjustable hinge system in order to obtain the desired deformation. Note that the woman also has the same cranial deformation as the child (From Mason 1889, redrawn from the original artwork by Fernanda Daris)
Darwin has told how, in both Old and New Worlds, the shape of the skull was changed during childhood in the most extraordinary ways and how the so-called deformity was still considered an essential decorative element in many countries.
However, it was Imbelloni’s research [9] which provided the first extensive reconstruction of the problem. Imbelloni was responsible for the first actual classification of artificial deformation of the skull. This classification was formulated on the basis of a series of 2,350 metric notations taken from the examinations of 94 skulls from Bolivia, Peru, and Argentina. The skulls were chosen on typological criteria from among several thousands in Buenos Aires and La Plata museums. Each type of deformation is related to the use of a particular instrument and hence to well-defined mechanics. Asia seems to have been the center of the so-called tabular deformation, which represents the most widespread type of deformation. The two key areas of distribution correspond to the Tartar tribes and to Kurdistan and Armenia. This custom would have been spread from Asia to the West by the Cimmerians’ migrations or, later, by the Huns or Avars.
Only gold members can continue reading. Log In or Register to continue