Behaviour of nervous tissue during pressure

Compression of the nerve root

Peripheral nerves contain both neural and supportive elements. A large multifascicular nerve is composed of a number of different bundles of nerve fibres or fasciculi (Fig. 2.1). These are bound together by the epineurium, a condensation of areolar connective tissue derived from the mesoderm. In humans, the epineurium normally constitutes 30–50% of the total cross-sectional area of the nerve bundle: it contains fibroblasts; collagen (types I and III); variable amounts of fat (possibly to cushion the nerve fibres it surrounds); lymphatic; blood vessels (vasa vasorum); and free nerve endings. In a monofascicular nerve, the epineurium only surrounds the fasciculus and is fused with the perineurium. 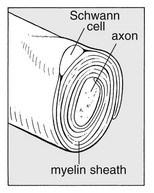 Fig 2.1 A peripheral nerve is composed of a number of different fasciculi.

The perineurium surrounds and protects one fascicle. It has two different layers; an outer collagen-rich connective one and an inner epithelial layer of contiguous cells. The perineurium has an important role in maintaining the osmotic milieu and fluid pressure within the endoneurium and also acts as a barrier against chemical and bacterial invasion.1

The connective tissue of peri- and epineurium possesses blood and lymph vessels – the so-called vasa vasorum.2,3 Also free nociceptive nerve endings which come from the related multifascicular nerve trunks are embedded in the perineurium and epineurium.4,5

Enclosed in the perineurium is the fasciculus – a bundle of nerve fibres bound together and protected by the endoneurium. The latter consists of long collagen fibres running with the nerve fibres. The fibrous and cellular components of the endoneurium are bathed in endoneural fluid.6

The nerve fibres are axons – the distal offshoots of nerve cells (Fig. 2.2). Most axons are surrounded by a myelin sheath formed from the compressed and concentric Schwann cell membranes. Axons range in diameter from 0.2 µm (small non-myelinated nociceptive axons) to 20 µm (large and myelinated efferent motor axons) and in length from 1 to 100 cm. They contain most of the cell volume. 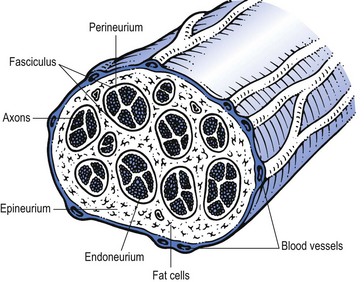 From central to peripheral, the nervous system can be clinically divided into four zones (Fig. 2.3): 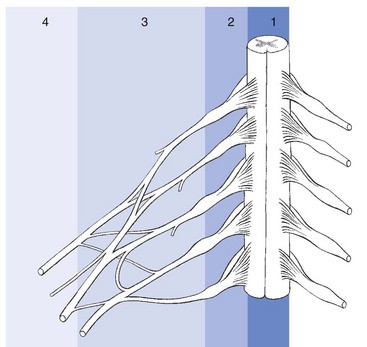 • The spinal nerve, which contains fibres belonging to one segment

• In the brachial and sacral area, and distal from the spinal ganglion, the different spinal nerves form a nerve plexus, from which originate the large multifascicular nerve trunks 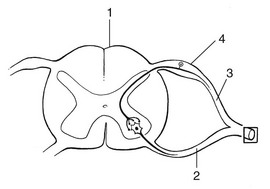 Proximally, the rootlets float freely within the cerebrospinal fluid which is the main source of their metabolic needs. In this intrathecal part of the intraspinal root, the rootlets are held together by the endoneurium which is more loosely arranged than is typically seen in peripheral nerves.8 Further distally, the nerve root becomes enclosed in the dural sheath – a tubular prolongation of the dura. In this dural investment the nerves do not lie freely but are bound by the arachnoid membrane (Fig. 2.5).9,10 This area is known as the extrathecal part of the intraspinal nerve root – that length of the root and the dural sleeve between the main dural sac and the exit from the foramen. The extrathecal portion is short in the cervical region but becomes longer with the increasing obliquity of the intraspinal roots in the thoracolumbar and lumbar regions. 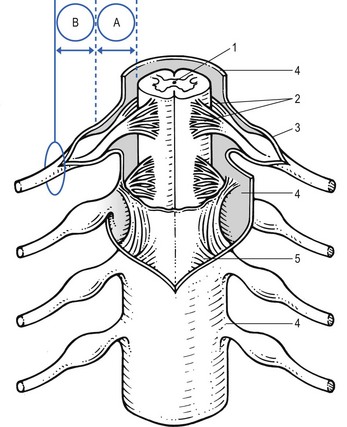 Distal to the posterior root ganglion, at the level of the foramen, the posterior and anterior roots are fused into one single bundle. Here the nerve root becomes extraspinal. The tissue of the epidural pouch becomes more condensed and blends with the epineurium of the extraspinal nerve root.

The segment of the spinal root which is liable to compression, whether by a disc protrusion, an osteophytic outgrowth or a narrow lateral recess, is the extrathecal part of the intraspinal root. To understand the symptom of a compression or inflammation of this part of the peripheral nerve system, it is necessary to recognize the importance of the dural investment – the nerve root sheath. The dural sheath has considerable sensitivity:11 it has many nociceptive nerve endings, especially at the anterior aspect where it receives its innervation from the sinuvertebral nerve belonging to the same segment.12–14 Pain arising from the dural sheath is segmental and obeys the rules of segmental reference of pain (see Ch. 1). There is no evidence that root pain arises from involvement of the axons. For example, pressure at the extraspinal nerve root, which misses the nerve root sleeve, as happens in some types of spondylolytic compression, causes not pain but only paraesthesia and neurological deficit.

Immediately distal to the foramen, the single fasciculus of the extraspinal root is enclosed in a thin, but strong, perineurial sheath, external to which is the epineurial areolar connective tissue. Within a few millimetres of its formation, the single fasciculus of the spinal nerve divides into several bundles which form the plexuses. Motor and sensory fibres of one nerve root mix, and more distally there is a redistribution of the fasciculi of various consecutive nerve roots.15 The brachial plexus is thus formed of the anterior rami of roots C5–T2, and the sacral plexus of the roots L2–S5. Distally, the fasciculi continue in the large nerve trunks of the limbs.

The fasciculi of plexus and trunks do not differ significantly from those of the roots or the peripheral nerves. The connective support tissue, however, has some anatomical particularities. Because the monofascicular spinal nerve changes into a multifascicular structure, there is an increased amount of epineurial tissue, forming a protective packing for the nerve tissue. The perineurium is also reinforced by elastin fibres. The fasciculi have an undulating course, whereas the collagen fibres run more longitudinally. This structure ensures that the nerve fibres are protected from mechanical deformation (compression and elongation) during normal movements of the limbs.16 Although the epi- and perineurium contain nociceptive nerve endings, these seem to be relatively insensitive.17

A small peripheral nerve is the distal termination of a branching nerve trunk. The nerve ending is often monofascicular. The epineurium is then fused with the perineurium. Peripheral nerves can either have only a motor or a sensory function, or both can be combined. They all have nociceptive nerve endings in their supporting connective tissue.

Lesions of the peripheral nervous system are characterized by a pathognomonic sensation: paraesthesia (‘pins and needles’). Although all tissues in the human body which contain nociceptive structures can be a source of pain, pins and needles will only arise when some part of the peripheral nervous system is at fault. Hence, the medical world tends to use the term ‘neuritis’ when pain is accompanied by pins and needles. Strictly, however, the suffix ‘-itis’ implies inflammation. Therefore the word neuritis should only be used when the peripheral nerve is affected by infectious or toxic irritation – i.e. there is an intrinsic disorder of the nervous parenchyma. Classically, these lesions are classified into mono- and polyneuritis. They are not discussed in this book, except in the shoulder region, where the clinical appearance of three mononeurites and neuralgic amyotrophy of the shoulder girdle is reviewed (see online chapter Nerve lesions and entrapment neuropathies of the upper limb).

When external pressure is applied to a normal nerve, pins and needles arise, although the nerve tissue is initially not inflamed. If the compression is not severe, the nerve continues to conduct normally. This situation of extrinsic pressure on a normal nerve is not a ‘neuritis’ and requires a totally different therapeutic approach. In this situation, the terms ‘pressure on nerve’ or ‘entrapment neuropathy’ are preferred.

Peripheral nociceptors in the connective tissue of the peripheral nerves are stimulated, and via Ad and C fibres of the nervi nervorum conducted to the spinal cord and thence to the pain projection areas in the cortex.18 There are indications that most of the pain that stems from direct irritation of the peripheral nervous system is of nociceptive origin.19,20 ‘Nerve pain’ thus behaves identically to other peripheral pain,21 obeys exactly the rules of referred pain and is not to be distinguished from pain of ligamentous, tendinous or arthrogenic origin (see Ch. 1).

This type of pain, also called ‘de-afferentation or neuralgic pain’ is less common than nociceptive pain and results from prolonged damage to peripheral nerve tissue, such as avulsion, dissection or amputation.22 The pain is felt in the anaesthetic area, is continuous and burning and is independent of posture or movement, although local pressure can increase the pain considerably.23

Tags: A System of Orthopaedic Medicine
Jun 5, 2016 | Posted by admin in ORTHOPEDIC | Comments Off on Pressure on nerves
Premium Wordpress Themes by UFO Themes
WordPress theme by UFO themes