Calcifications within the soft tissues of the orbits are uncommon, but their radiologic demonstration often has clinical significance and may be pathognomonic of a specific disease. Calcifications of the lens presenting as a circular density of approximately 7 mm on the posteroanterior projection and as an oval density on the lateral view occur in cataracts.

In retrolental fibroplasia (retinopathy developing in premature infants with oxygen being the primary offending agent), flecks of intravitreal calcifications are found that may be combined in a more advanced stage with lenticular calcifications (Fig. 9.1).

Bacterial and parasitic infections may rarely cause intraorbital calcifications. Mucoceles from the frontal or ethmoidal sinus may erode into the orbital cavity. Gross calcification of the cyst-like wall of a mucocele occurs in 5% of these cases. Phthysis bulbi refers to shrinkage and wasting of the eye, usually the sequelae of severe, longstanding ophthalmic disease (e.g., trauma with intraocular foreign body, rupture of the globe, and chronic inflammatory disease). Calcification of the choroid, vitreous body and lens is common in this condition. In systemic conditions such as hypercalcemia (e.g., hyperparathyroidism) and connective tissue disease, intraorbital calcifications may occasionally be found. An intraorbital foreign body has to be differentiated from a pathologic calcification when the density of both is similar. The radiographic demonstration of even the smallest amount of intraorbital air (orbital emphysema) after a traumatic incident is virtually diagnostic of a fracture into an adjacent paranasal sinus, most commonly secondary to a fracture of the lamina papyracea of the ethmoid sinus (Fig. 9.2).

Erosions and Bony Defects in the Orbit

Dermoids and epidermoids occur most often in the superolateral portion of the orbit near its anterior margin. They grow slowly and produce a smoothly marginated defect often with slightly sclerotic margins.

Lacrimal gland tumors are benign mixed neoplasms that deepen the normal shallow fossa of the lacrimal gland in the superolateral quadrant of the orbit (Fig. 9.3). They do not produce a sharply marginated bony defect as observed with dermoid tumors in the same location. Rarely, lacrimal gland tumors undergo malignant transformation and cause irregularly marginated lytic defects with or without a diffuse increase in density of the surrounding bone. 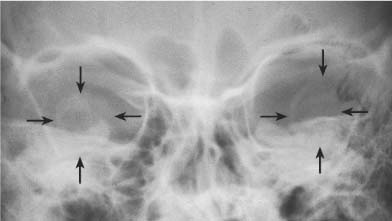 Fig. 9.1 Retrolental fibroplasia. Lenticular calcifications (arrows) are seen in both orbits in this far advanced stage of the disease. 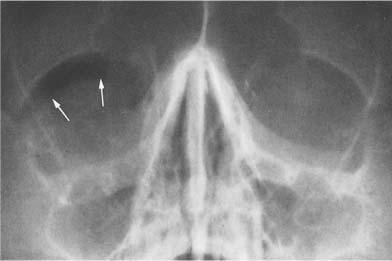 Fig. 9.2 Orbital emphysema. A crescent-shaped radiolucency (arrows) is seen under the right orbital roof post fracture of the lamina papyracea of the ethmoid sinus, which cannot be appreciated on this examination, 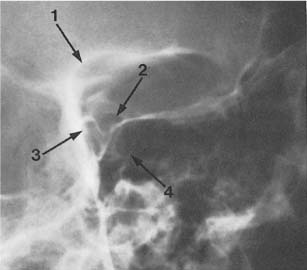 Fig. 9.3 Lacrimal gland tumor. An ovoid radiolucent defect with a relatively poorly defined inferior margin is seen in the superolateral aspect of the orbit caused by deepening of the normally shallow fossa of the lacrimal gland in this location (arrow 1). Note also the oval-shaped optic canal (arrow 2), the pneumatized anterior clinoid projecting laterally to the optic canal (arrow 3), and the caroticoclinoid canal projecting inferiorly to it (arrow 4) on this standard optic canal projection. 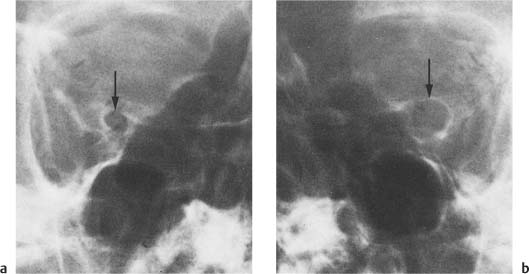 Fig. 9.4 a, b Optic nerve glioma. A concentric enlargement of the left optic canal measuring 10 mm in diameter is seen in b (arrow). The normal right optic canal is shown for comparison in a (arrow). 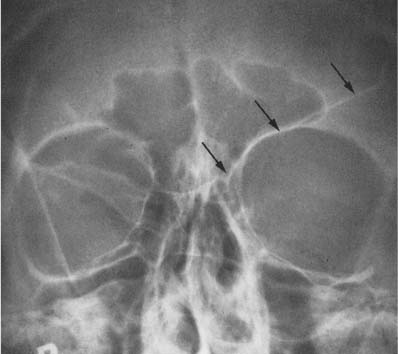