MEASUREMENT of RANGE of MOTION of the ELBOW and FOREARM

MEASUREMENT of RANGE of MOTION of the ELBOW and FOREARM

Within the elbow joint capsule are three articulations, two that make up the elbow joint complex and one that is part of the forearm complex. The humeroradial and humeroulnar joints make up the joint complex known as the elbow (Figs. 4-1 and 4-2). The humeroradial joint consists of the articulation between the convex capitulum of the distal humerus and the slightly concave proximal surface of the radial head. The articulation between the somewhat hourglass-shaped trochlea of the humerus and the concave, semilunar-shaped trochlear notch of the ulna forms the humeroulnar joint. Both joints are located within a single joint capsule that also is shared by the proximal radioulnar joint.2 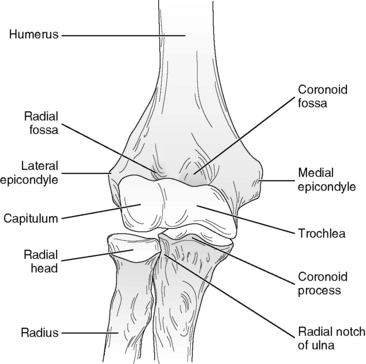 Fig. 4-1 Bony anatomy of the joints of the elbow—anterior view. 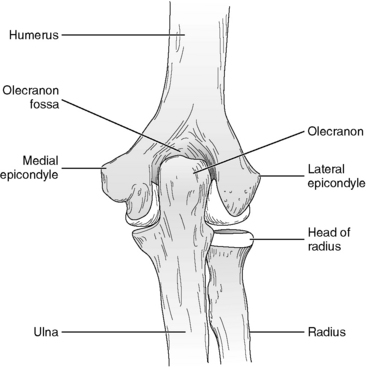 Fig. 4-2 Bony anatomy of the joints of the elbow—posterior view.

Ligamentous reinforcement of the elbow joint occurs primarily on the medial and lateral sides of the joint via the ulnar (Fig. 4-3) and radial (Fig. 4-4) collateral ligaments, respectively. These ligaments resist valgus and varus stresses to the joint throughout the full range of elbow motion.18,26,21 Additional stability of the elbow joint is provided by the high degree of bony congruency between the articular surfaces that make up the joint. 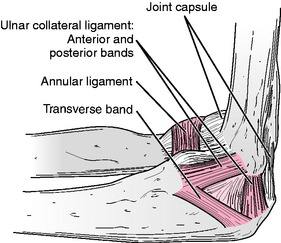 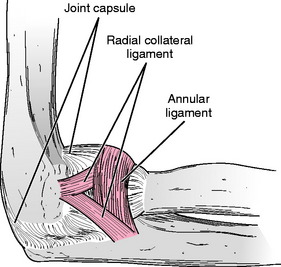 During the movements of elbow flexion and extension, the concave surface of the trochlear notch of the ulna glides along the convex trochlea of the humerus. Simultaneously, at the humeroradial joint, the concave head of the radius glides along the convex capitulum of the ulna. Both radial and ulnar articular surfaces glide anteriorly as the elbow flexes and posteriorly as it extends. At the extremes of flexion and extension, rolling motions of the ulna and radius replace the gliding motion.13,28

Elbow flexion range of motion (ROM) is limited by soft tissue approximation between the structures of the anterior arm and the forearm, particularly during active flexion of the joint when contact between contracting flexors of the arm and forearm stops the motion. The range of elbow flexion tends to be greater when the joint is moved passively because there is less interference by contracting muscle bulk. Elbow extension ROM is limited by contact of the olecranon process of the ulna with the olecranon fossa of the humerus.10 Information regarding normal ROM for the elbow is located in Appendix B. 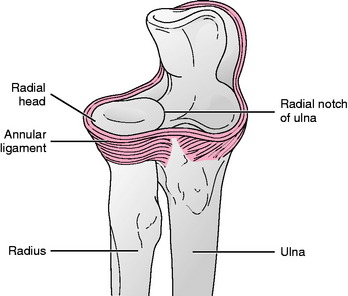 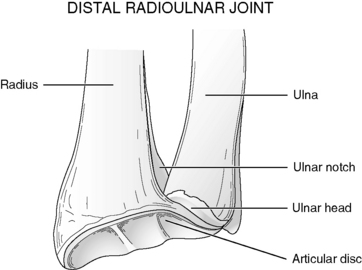 Both proximal and distal radioulnar joints are classified as pivot joints, allowing rotation of the radius around the ulna in a transverse plane. When the forearm is fully supinated, the radius and the ulna lie parallel to each other. As the forearm pronates, the radius crosses anteriorly over the surface of the ulna. Very limited, if any, movement occurs at the middle radioulnar union.

Supination of the forearm is limited by tension in ligamentous structures (anterior radioulnar ligament and oblique cord).25 Limitation of forearm pronation occurs as the result of contact between the bones of the forearm (radius crossing over ulna) and tension in the medial collateral ligament of the elbow and the dorsal radioulnar ligament of the distal radioulnar joint.7,21 Information regarding normal ranges of motion for forearm supination and pronation is located in Appendix B.

The typical end-feel for forearm supination is firm as a result of ligamentous tension. Because bony contact limits pronation, the normal end-feel for that motion is hard.

RANGE OF MOTION AND FUNCTIONAL ACTIVITY

Most functional activities require a fairly large amount of elbow flexion ROM (Figs. 4-8 to 4-10). A recent study by van Andel and colleagues31 reported that all functional tasks examined in their study required a minimum of 85 degrees of elbow flexion. These results were similar to those reported by Vasen et al,32 who used a motion-restricting brace to determine the functional ROM of the elbow. Of 50 subjects examined, 49 were able to perform all 12 functional activities included in the study, with elbow motion limited to a range of 75 degrees to 120 degrees of flexion. 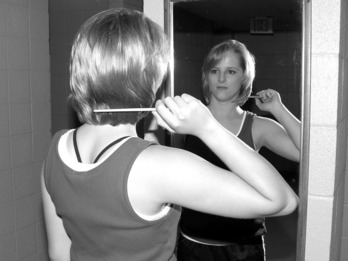 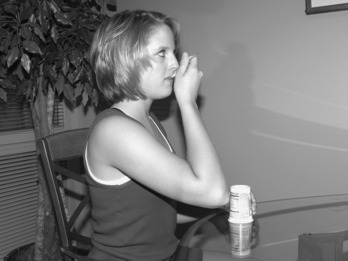 Fig. 4-9 Elbow and forearm motion required to eat with a spoon. 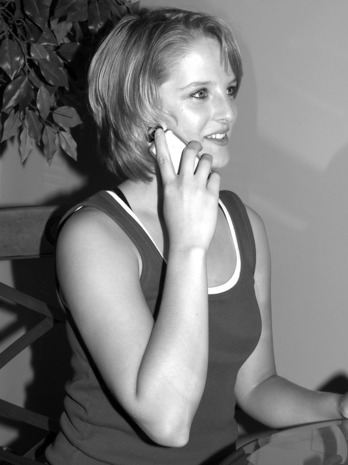 Fig. 4-10 Elbow and forearm motion required to use a telephone.

Numerous other investigators have attempted to quantify the amount of elbow and forearm motion required to perform various functional activities.3,6,14,15,19,20,22–24 A summary of elbow and forearm range of motion related to various functional activities is provided in Table 4-1. Most of the studies from which data were derived were performed in healthy adults, although some data were obtained from elderly and pediatric subjects. Essentials of the study populations and the instrumentation used are included in the table. Caution should be used in extrapolating these data to the general population because sample sizes for all studies were small. For more in-depth information on each study, the reader is referred to the reference list at the end of this chapter. 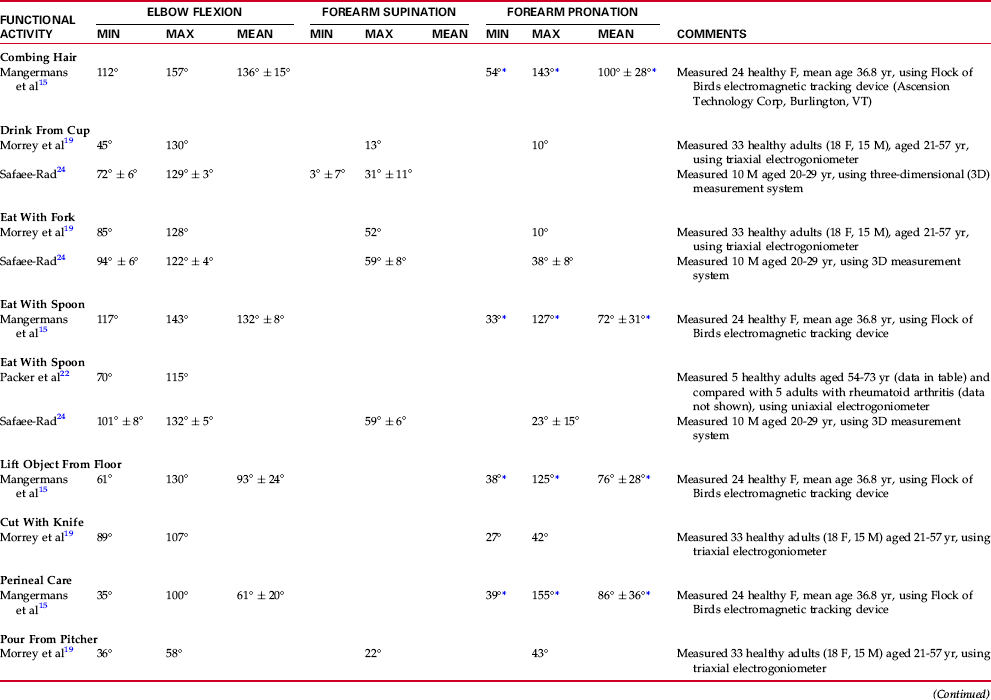 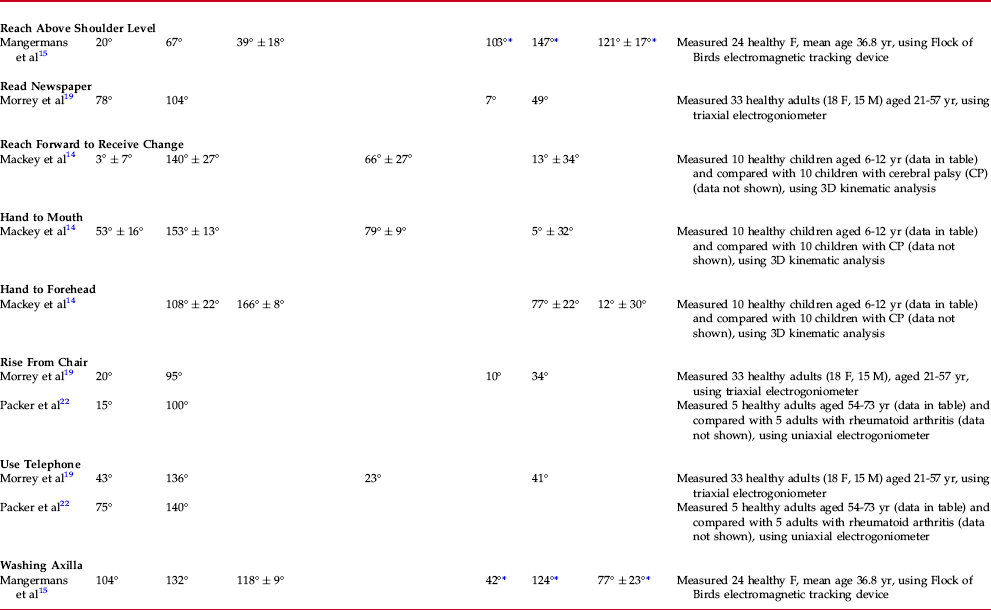 Elbow flexion and extension may be measured with the patient in the upright (standing or sitting), supine, or side-lying position. Because of greater stability provided to the humerus, the supine position is preferred for measurement of ROM. The American Academy of Orthopaedic Surgeons5 recommends that the patient be in the upright position with the shoulder flexed to 90 degrees when measurements of elbow flexion and extension are taken. In patients with tightness of the long head of the triceps, such positioning may limit flexion of the elbow. Therefore, motions of the elbow joint should be measured with the shoulder maintained in the anatomical position.

Tags: Joint Range of Motion and Muscle Length Testing
Aug 10, 2016 | Posted by admin in PHYSICAL MEDICINE & REHABILITATION | Comments Off on MEASUREMENT of RANGE of MOTION of the ELBOW and FOREARM
Premium Wordpress Themes by UFO Themes
WordPress theme by UFO themes