Developed in 1876 as a method of measuring hip flexion contractures in children with tuberculosis, the Thomas test for determining iliopsoas muscle length has become “probably the most widely known and performed test for detecting decreased hip extension.”18 The original Thomas test was defined by Kendall et a115 as follows:

“The Thomas flexion test is founded upon our inability to extend a diseased hip without producing a lordosis. If there is flexion deformity, the patient is unable to extend the thigh on the diseased side, and it remains at an angle.”

The original Thomas test has undergone modifications over the years. Today, the most frequent variation in the original technique is to use a goniometer to measure the amount of hip flexion while the subject holds the contralateral knee toward the chest.16,19,24

A second technique that can be used to measure iliopsoas muscle length is a modification of the technique used by the American Academy of Orthopaedic Surgeons (AAOS) to measure hip extension.11 This technique is performed with the patient in the prone position with the knee flexed to 90 degrees.

The length of the rectus femoris muscle also can be examined in the prone position. The knee is fully flexed through the full available range of motion (ROM), ensuring that the ipsilateral hip is not allowed to flex.

According to Gajdosik et al,7 the straight leg raise is the most common clinical test for measurement of hamstring muscle length. A second type of test used for the measurement of hamstring muscle length is the knee extension test, which is described in the literature as being performed in two ways: active25 and passive.6,21 Magee19 refers to these tests as the “90/90 test.” Measurements similar to the 90/90 knee extension test have been described in the pediatric medical literature for examination of infants; these tests are referred to as measurement of the “popliteal angle.”14,26

The sit-and-reach test, a field test used to measure hamstring flexibility, is a part of most health-related physical fitness test batteries.13 The test is performed by having the subject assume the long sitting posture and reach forward with both hands as far as possible, not allowing the knees to flex. A score is given based on the most distant point on a standardized box reached by both hands (Fig. 14-1).1,2

Fig. 14-1 Illustration of the sit-and-reach test, a composite test that measures multiple motions and muscles that is not included in this chapter.

Although the sit-and-reach test has been shown to be reliable,12,28 some authors suggest that the ability to reach is influenced by hamstring flexibility, range of motion of the lumbar and thoracic spine, anthropometric factors such as legs short or arms long relative to the length of the trunk, and the amount of scapular abduction, allowing a greater reach with the arms.2,12 Jackson and Langford13 suggest that “the sit and reach test does not possess criterion-related validity as a field test for hamstring and low back flexibility.”

Included in Chapter 1 is information defining composite tests (tests that measure more than one motion or muscle), along with a rationale for avoiding these types of tests when examining muscle length. Given that the sit-and-reach test is influenced by so many factors, including muscle length of the upper and lower extremities and range of motion of the spine, a detailed description of this technique is not included in this chapter.

In 1952, Kendall et al17 presented a modification of the original Ober test, suggesting that the examiner should keep the knee extended in the extremity to be tested (as opposed to flexing the knee to 90 degrees, as originally described by Ober) while performing the examination. The test is referred to as the Modified Ober test. The following reasons have been offered for modifying the original Ober test: less stress to the medial knee joint, less tension on the patella, less potential interference by a tight rectus femoris muscle,16 and a more functional test position.20 Based on a review of the literature, the Ober test and the Modified Ober test appear to be used with equal frequency; neither test has been shown to be more popular, more accurate, or easier to perform than the other.

Expressing concern that the Ober test was too difficult to be used “satisfactorily,” Gautam and Anand9 suggested the use of an alternative test for examining iliotibial band and tensor fasciae latae muscle length. These authors suggested that the problem with the Ober test arose from difficulty in maintaining the hip in 0 degrees extension while at the same time attempting to examine the amount of hip adduction. They suggested that the Ober test is, therefore, a “two-plane” test (i.e., extension, abduction). Gautam and Anand9 proposed an alternate test for estimating iliotibial band contracture to be performed with the patient prone, thus eliminating the need to control hip extension. In this way, the two-plane Ober test is converted into a one-plane test of abduction. This “new test” for iliotibial band and tensor fasciae latae length is referred to in this text as the prone technique.

Methods of quantifying the results of the Ober test and of modifications of the Ober test range from observation9,12,22 to use of the goniometer,8,23,26 the tape measure,3 and the inclinometer.20,27 Ober22 relied on observation to quantify the results, stating that “if there is no contracture present, the thigh will adduct beyond the median line.” Hoppenfeld12 suggested that when the Ober test is performed, if the iliotibial tract is “normal,” the thigh should drop to the adducted position, and if “contracture” is present in the tensor fasciae latae or the iliotibial band, the thigh remains abducted. Gose and Schweizer10 presented a slightly more sophisticated classification system, which describes the position of the lower extremity relative to the horizontal body plane:

Gajdosik et al8 suggested the use of a goniometer to quantify length of the iliotibial band and tensor fasciae latae muscles during performance of the Ober test. The stationary arm of the goniometer was aligned with both anterior superior iliac spines and the movable arm aligned with a line drawn on the midline of the thigh. (The location of the axis of the goniometer was not provided.) A value of 0 degrees was documented when the thigh was horizontal, positive values were recorded if the thigh was adducted past horizontal, and negative values were recorded if the thigh did not adduct to horizontal.

The use of a tape measure to quantify muscle length was described by Doucette and Goble.3 Subjects were placed in the Ober test position, and the distance between the medial border of the patella and the support surface was measured. Melchione and Sullivan20 and Reese and Bandy27 described use of an inclinometer placed at the distal lateral thigh of the extremity on which the Modified Ober test was performed.

The key to differentiating between muscle length testing of the gastrocnemius and soleus muscles is the realization that because of its origin on the femur and insertion on the calcaneus, the gastrocnemius crosses two joints (the knee and the ankle joints). The soleus originates from the posterior surface of the fibula and tibia and crosses only the ankle joint as it inserts into the posterior surface of the calcaneus.

Supine, with hip of lower extremity to be measured extended. Buttock should be toward edge of support surface so knees extend just past the edge (Fig. 14-2). 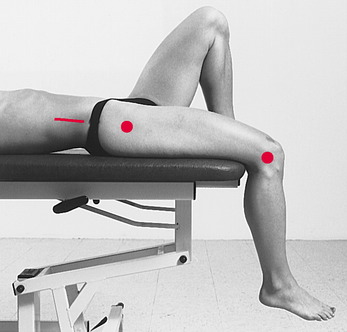 After instructing patient in motion desired, flex contralateral hip, bringing knee toward chest. Knee is allowed to flex fully. The contralateral hip should be flexed only enough to flatten lumbar spine against support surface (Fig. 14-3). (Note: Extremity not being flexed is extremity to be measured with goniometer and is referred to as the “tested” extremity.) 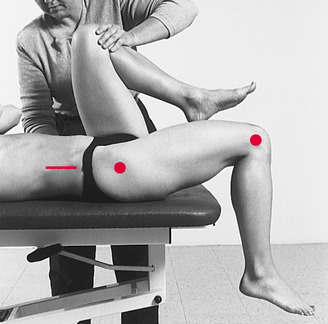 Patient is instructed to grasp knee to chest, only enough to flatten lumbar spine against support surface (Fig. 14-4). 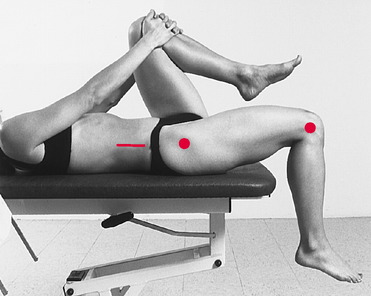 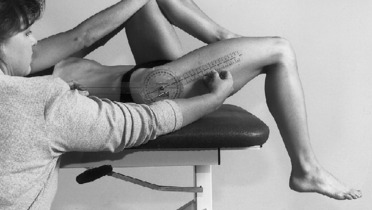 If muscle length of iliopsoas is within normal limits, thigh of lower extremity being measured remains on examining table. No measurement is needed. If decreased muscle length of iliopsoas is present, patient’s thigh being measured will rise off examining table. Maintaining proper goniometer alignment, read scale of goniometer for amount of hip flexion (see Fig. 14-5). (Note: If flexion of contralateral lower extremity to chest causes tested extremity to abduct rather than lift off support surface, patient may have tight iliotibial band.)

Contralateral hip should be flexed by patient only enough to flatten lumbar spine against support surface. Pulling hip to chest and allowing inappropriate rotation of pelvis causes inaccurate measurement and should be avoided.

An assistant is needed to perform this measurement correctly. 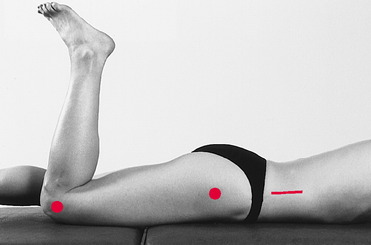 After instructing the patient in motion desired, stabilize pelvis by placing one hand on ipsilateral side: with other hand, extend patient’s hip maximally (indicated by pelvis beginning to rise), keeping knee flexed to 90 degrees (Fig. 14-7). 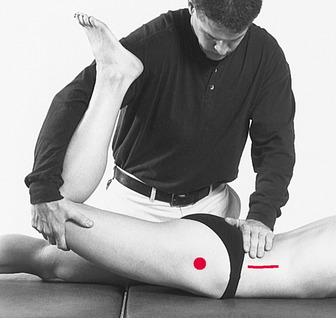 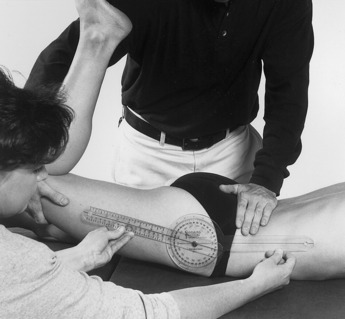 Supine, with hip of lower extremity to be measured extended. Buttock should be toward edge of support surface so knees extend just past the edge (Fig. 14-9). 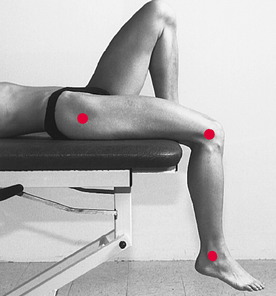 After instructing patient in motion desired, flex contralateral hip, bringing knee toward chest. Knee is allowed to flex fully. The contralateral hip should be flexed only enough to flatten lumbar spine against support surface (Fig. 14-10). (Note: Extremity not being flexed is extremity to be measured with the goniometer and is referred to as the “tested” extremity.) 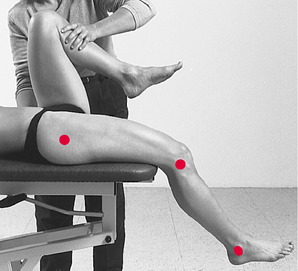