• Femoroacetabular impingement is a cause of hip osteoarthritis.

• Osseous deformities of the proximal femur and acetabulum can result in increased forces and damage to the acetabular rim complex caused by a process of hip motion.

• The femoral deformity, known as the cam mechanism, causes an “outside in” shearing injury to the labral-chondral junction.

• The acetabular deformity is due to overcoverage from a retroverted acetabulum, a prominent anterior wall, or a deep acetabulum (coxa profunda) that induces more direct labral abutment with hip flexion.

Femoroacetabular impingement (FAI) occurs when osseous abnormalities of the proximal femur and/or the acetabulum through the process of hip motion result in hip pain and eventual damage to the acetabular rim complex (labrum and acetabulum). Unlike dysplasia, which is a static overload of the acetabular rim, FAI is a dynamic process whereby overload occurs with motion. Two mechanisms of impingement have been identified: the cam mechanism is due to a proximal femoral deformity, and the pincer mechanism is due to acetabular overcoverage. Most hips with FAI have a combination of both pincer and cam mechanisms.1 The end of physiologic hip flexion and rotation is the motion that is responsible for the process of impingement. Symptoms usually include groin pain exacerbated by flexion activities. The hip examination commonly reveals limited flexion and internal rotation. Patients have pain with hip flexion, adduction, and internal rotation, known as the impingement test.2 Radiographs often reveal acetabular overcoverage and an abnormality of the proximal femur. Femoroacetabular impingement is one of the causes of degenerative osteoarthritis.3 Retrospective studies have indicated that surgical treatment can improve pain and function on a short-term to mid-term basis (Fig. 33-1A and B). 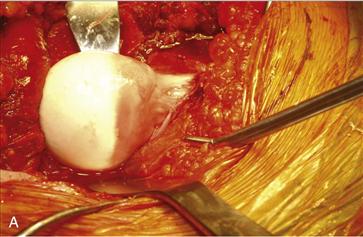 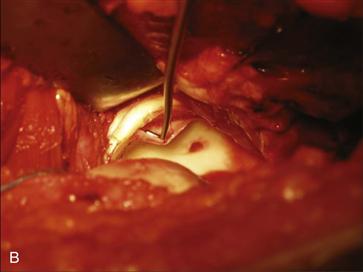 The epidemiology of femoroacetabular impingement is still unknown. Patients who have FAI commonly have a history of performing athletic activities that require extremes of hip motion, particularly flexion and rotation, such as female dancers or a hurdler (rear leg). What is not clear is whether these activities lead to the osseous morphology of FAI, or if these patients have a predisposition that results in symptoms after activity. Patients who participate in activities with extremes of motion may have only a small osseous deformity and still may develop symptoms caused by repetitive trauma. Patients may not have symptoms despite evidence of the typical cam deformity on radiographs.4 In one study on adolescents, females with the pincer mechanism were more common than males with cam lesions. Many of these adolescent females were competitive dancers; therefore repetitive extreme hip motion may occur, in contrast to their male cohorts in this age group.5 What is unknown is exactly how hip morphology changes over time, and whether patients with large cam lesions in their third and fourth decades had less involved osseous abnormalities when they were younger.

In the skeletally immature hip, the physis of the anterior-lateral head and neck junction may grow anteriorly-inferiorly in response to different stresses and activities, resulting in an early cam lesion. Also, a femoral retroversion as seen in slipped capital femoral epiphysis (SCFE) over years of hip motion may impinge on the acetabular rim, resulting in a progressive cam lesion. In one study of cadaver bones, Goodman described that “post-slip morphology” is associated with hip osteoarthritis.6 Therefore it is theoretically possible that the cam lesion or deficient offset between the femoral head and neck is a result of a silent subclinical SCFE in some adolescents. It has been reported that there might be a genetic predisposition to the osseous deformities that predispose the hip to FAI. Siblings had a risk 2.8 times that of a control group of having a cam deformity, and a risk 2.0 times that of the control group of having a pincer deformity.7 In summary, acetabular deformities such as retroversion or overcoverage and proximal femoral deformities such as retroversion, a nonspherical femoral head, and deficient offset at the anterior-lateral head and neck junction likely predispose the hip to FAI. If a younger patient with these predispositions partakes in athletic activities in which repetitive nonphysiologic hip motion occurs, this may stimulate mild osseous abnormalities to worsen, or repetitive activities may result in symptoms at a young age without a severe deformity.

The prevalence of symptomatic FAI is unknown. Ochoa evaluated young patients with complaints of hip pain and noted radiographic signs of FAI in 87% of hips.8 Early data indicate that hip impingement disorders may be the cause of hip osteoarthritis in 40% to 50% of patients.9 Uncertainty about the prevalence of FAI continues, because many hips with the osseous abnormalities of FAI may be asymptomatic for decades, and some do not rapidly progress to osteoarthritis.10 Allen and colleagues4 analyzed the contra-lateral hip in patients with symptomatic FAI and found deformities suggestive of FAI, although the hip was asymptomatic in most cases. Why some hips with osseous abnormalities of FAI remain asymptomatic and some hips with rather mild radiographic abnormalities become symptomatic is still a mystery. Many hips will have advanced arthritis before becoming symptomatic. These realities make clear knowledge of the incidence and natural history of FAI and the effects of treatment on the natural history perplexing.

The cam mechanism occurs when the proximal femur lacks sufficient offset between the femoral head and neck, or when the femoral head is not spherical. With hip motion, particularly flexion, clearance for the head and neck junction is not sufficient as it enters the acetabulum. Therefore, as the hip is flexed, an outside-to-inside increased shearing force occurs on the anterosuperior acetabular cartilage, beginning at the labral-chondral junction. The femoral head and neck will deflect the labrum as it enters the joint. This chronic, repetitive trauma may over time result in labral injury and articular cartilage injury. Injury to the cartilage and to the labral-chondral junction is more significant than labral pathology. This injury manifests as labral irritation, intrasubstance degeneration, and labral base tears. Greater cartilage injury is seen with the cam mechanism. The cartilage injury manifests as superficial degeneration followed by delamination of cartilage from the subchondral bone, eventual separation of the labral-chondral junction, and a flap tear of the cartilage into the acetabulum. Osseous deformity ranges from a femoral head that is not spherical, to a straight takeoff of the femoral neck from the anterior femoral neck, to an obvious “bump” or convexity at the proximal femoral neck. The cam deformity is commonly located anterolateral on the femoral neck, but it may also be direct anterior, anteromedial, or posterolateral. This deformity is more common among young males and has often been described as a silent undiagnosed SCFE deformity,6 but it can be present with retroversion of the femoral neck or a short femoral neck when clearance with hip flexion is poor (Fig. 33-2). 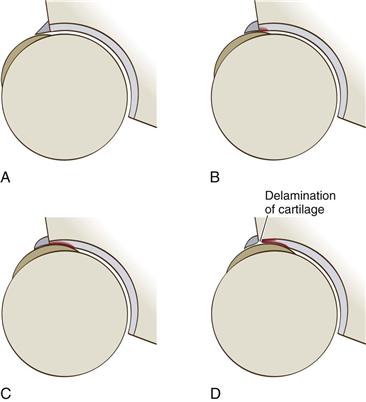 Figure 33-2 A through D, Illustration of the cam mechanism. As the hip is flexed, a dynamic abnormal force on the acetabular cartilage starts at the labral-chondral junction. (Redrawn from Beck M, et al: Hip morphology influences the pattern of damage to the acetabular cartilage: femoroacetabular impingement as a cause of early osteoarthritis of the hip. J Bone Joint Surg Br 87:1012–1018, 2005.)

The pincer mechanism is a result of acetabular overcoverage. The extreme of this would be protrusio acetabuli. With the pincer mechanism, as the hip reaches the physiologic end of motion, the femoral neck has a direct abutment on the acetabular rim, causing more direct labral trauma. The cartilage injury is usually contained to the rim, unlike in the cam mechanism, whereby the osseous abnormality enters the joint, causing greater cartilage injury. Because the femoral head has anterior abutment, the femoral head can be forced in a posterior direction, resulting in a posterior cartilage contrecoup injury adjacent to the fovea. Theoretically, this would be more likely to occur in those with greater laxity in their anterior hip capsule. Acetabular overcoverage is caused by global acetabular retroversion, a prominent anterior wall, and a deep acetabulum (protrusion or coxa profunda). Cartilage pathology in those with more of a pincer mechanism is isolated to the periphery of the acetabulum1 (Fig. 33-3).

Figure 33-3 A through C, Illustration of the pincer mechanism. As the hip is flexed, the femoral neck abuts the rim of the acetabulum. Direct injury to the labrum and rim cartilage is evident. A contrecoup injury to the posterior acetabular cartilage also may occur. (Redrawn from Beck M, et al: Hip morphology influences the pattern of damage to the acetabular cartilage: femoroacetabular impingement as a cause of early osteoarthritis of the hip. J Bone Joint Surg Br 87:1012–1018, 2005.)

To conclude, osseous abnormalities that occur through the process of hip motion result in a dynamic process of labral and cartilage injury. The severity of the deformities, the level of activity of the patient, and likely the patient’s ligamentous laxity all play a role in the development of symptomatic hip impingement. Many patients with significant osseous deformities do not have symptoms; other patients are highly symptomatic with minimal abnormalities. It remains a mystery why some hips even in the same patient will become symptomatic and why some will not.

The diagnosis of femoroacetabular impingement is based largely on history and physical examination findings (Box 33-1). The most common symptom of patients with FAI is anterior groin pain. When asked the location of pain, patients commonly will point directly to the groin. This is often referred to as the c-sign, or grab sign (Fig. 33-4). Pain in the buttocks or the peritrochanteric region is possible, although it is less common than groin pain. Patients occasionally will point to the posterior trochanteric region. Hip pain does not radiate distal to the knee joint but may radiate down the anterior thigh. A spinal cause for the pain should be ruled out in patients with pain distal to the knee. Pain is often exacerbated by flexion activities and may be worse with sitting than with ambulation. Onset of symptoms usually is insidious and episodic at first. An increase in physical activity or a minor traumatic event can exacerbate or initiate symptoms. Symptoms may become more frequent with time or may remain intermittent, despite progressive hip osteoarthritis. It is poorly understood why some patients suffer more than others with similar radiographic findings. Allen showed in patients who underwent surgical treatment that the contralateral hip had cam deformities consistent with FAI in 77.8% of cases, but only 26.1% of these had bilateral pain.4 Patients with advanced symptoms will have a mild antalgic or Trendelenburg gait. Patients with dysplasia may complain of similar groin pain but often will have more of an abductor fatigue with activities. Pain with sitting and flexion activities is more associated with FAI than with dysplasia. Most patients will participate or have participated in an activity or sport that involves supraphysiologic hip motion such as dancing. They may have participated in these activities for years before the start of symptoms.

• Deficient (flat or convex) offset between the femoral head and neck