Disorders of the midtarsal joints

Disorders of the midtarsal joints

Lesions of the cuneiform–first metatarsal joint

The talonavicular and calcaneocuboid joints and the tarsometatarsal joints comprise the midtarsal joints. Functionally, they act as one structure. Movement is possible in six directions: dorsiflexion–plantiflexion, adduction–abduction and pronation–supination. It is important for the ankle and subtalar joints to be stabilized when these movements are performed; this is achieved by dorsiflexion in the ankle joint and strong valgus pressure at the heel.

Due to the obliquity of the joint surfaces and the greater mobility of the talonavicular joint, dorsiflexion is usually accompanied by some abduction, whereas plantiflexion induces adduction.

At the distal (Lisfranc’s) joint, considerable rotation round the second metatarsal shaft is possible (Fig. 59.1). Because of the specific structure of the joint line, plantiflexion of the metatarsals will always be accompanied by a movement towards the second metatarsal. Therefore a plantiflexion movement at the midtarsal joint increases the curvature of the anterior arch, whereas dorsiflexion is associated with flattening.

The capsular pattern at the midtarsal joints is increasing limitation of adduction, supination, plantiflexion and dorsiflexion (Fig. 59.2). The mid-foot finally fixes in an abducted and pronated position because of a spasm of the peroneal muscles. 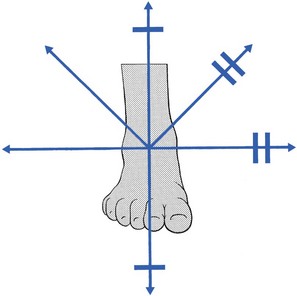 Fig 59.2 The capsular pattern at the midtarsal joints.

The sign that first draws attention to this disorder is spasm of the peroneal muscles. Therefore it has been called ‘spasmodic pes planus’, which is a misnomer because it is not the spasm but the underlying capsulitis that causes the pain. Spasm is never primary but results from inflammation of the joint.

The arthritis is caused by overuse at the midtarsal joints. It is now an uncommon condition that occurs only in boys aged between 12 and 16 years. Cyriax mentioned the cause as being overuse, resulting from standing for long periods, which used to happen in the transition from school to work. Both the midtarsal joints and the talocalcaneal joints are affected. The condition is usually bilateral.

The first sign that draws attention to the disorder is a clumsy gait, which does not go unnoticed by the parents. There is also some discomfort on standing. Walking and running do not cause pain and there is also a complete absence of pain when sitting or lying down.

Inspection reveals a long, thin foot, sometimes with some degree of pes cavus. An eversion deformity at the heel and the mid-foot is seen to be maintained by a spasm of the peroneal and extensor digitorum longus muscles. In standing, the peroneal tendons are visible as a prominent tight band behind and below the lateral malleolus.

A radiological evaluation of ankle and foot reveals no abnormality.

The natural history is for symptoms to subside and cease after 2 years. By that time, the foot has become permanently but painlessly fixed in the deformed position. A limp results. The disorder can also lead to later valgus sprains or lesions of the tibialis posterior and flexor hallucis longus tendons.

In the early stage, the essence of treatment is relief of weight bearing and support for the joint. Cyriax1 (pp. 436–438) advised that: ‘The lad … requires (a) a sedentary job, (b) a bicycle, (c) … [an inner] wedge on the heels of his shoes and (d) strapping of the joint.’

The patient is first told how his condition is provoked and he must understand that avoiding weight bearing is the important part of the treatment. He should never stand if he can help it; he must seek a sedentary job, should sit when at home and should use a bicycle rather than walk.

To bring the heels towards a varus position, the shoes are fitted with inner wedges and non-elastic strapping is worn as often as possible. The patient must maintain this regime for 6–12 months until he regains a full range of movement at the subtalar and midtarsal joints. Recurrence is uncommon once this stage is reached.

In advanced cases, the subtalar joint will have become fixed in a valgus position by considerable spasm of the peroneal muscles. Only slight movement can be obtained at the midtarsal joints. If no structural contracture of the ligaments about the talocalcaneal and midtarsal joints has yet occurred and the valgus deformity is only caused by peroneal spasm, immobilization in a plaster cast, with the foot held in varus position, can be tried. The cast, from below the knee to the toes, should be worn for 6 weeks to 2 months. To obtain this position, the peroneal nerve must temporarily be blocked at the point where it curls round the neck of the fibula.

The patients are usually overweight women in their 40s, 50s or 60s. Overuse is the common cause of the arthritis but sometimes the condition is due to an isolated sprain. The pain, limitation of movement and muscular spasm are less pronounced than in arthritis in adolescence. The condition does not seem to have a natural history: without treatment it appears to continue indefinitely but without much alteration. Cases that have persisted for 2 or 3 years are not uncommon.

Usually the arthritis is unilateral. Clinical examination reveals a capsular pattern of both the subtalar and midtarsal joints: the peroneal spasm restricts varus at the hindfoot and adduction–supination at the mid-foot. The radiological appearances are normal.

If only one joint is affected, infiltration with triamcinolone can be successful, provided prophylaxis against recurrence is given.

If more joints are affected, which is usually the case, the following treatment is instituted:

• Strapping the joints in varus and supination

• Tilting the heel in varus position by a medial wedge.

If all these measures are taken, the arthritis can be expected to clear up after 6 months, but the patient should guard against renewed overuse.

Rheumatoid or reactive types of arthritis can attack the midtarsal joints. If the arthritis is severe, the patient can walk only with difficulty, and pain at rest is so intense that sleep becomes disturbed.

As well as marked fixation in valgus and abduction–pronation, clinical examination shows gross synovial thickening, warmth to the touch and tenderness. If the oedema allows, the synovial thickening can be palpated over the dorsum of the joint.

A very effective local treatment is immobilization in a plaster cast, which eases the pain within a few days; however, if the cast is removed too soon, pain quickly returns.

Spontaneous recovery takes 1 or 2 years. During this period, the joint becomes fixed in abduction–pronation.

If an excessive strain is imposed on the midtarsal joints – for example, as the result of a deformity (e.g. plantaris) – the power of the musculature (tibialis posterior and flexor hallucis longus) becomes insufficient to maintain the longitudinal arches during weight bearing.2 After some time, the midtarsal ligaments become stretched, elongate and undergo inflammatory changes, so that pain results. Elongation promotes excessive movements at the midtarsal joints, which cause the plantar arch to flatten during weight bearing. As a result, the forefoot dorsiflexes and abducts, which causes the inner side of the foot to become prominent and further overstretches the calcaneonavicular ligament. In due course, the excessive motion of the joints and their poor alignment leads to inflammation of the capsule and to structural damage of the articular surfaces, which finally results in structural deformity and arthrosis.

To understand the mechanism of midtarsal strain, the ankle and foot should be seen as complex structures with an intimate interaction between position and function of their different components.

Initially, the body weight bears on the talus via a downward thrust through the tibia. The talus is supported by the calcaneus, on which it lies obliquely. The former therefore has a tendency to glide in a medial and forward direction, especially in patients with an equinus deformity at the ankle or in patients with too short plantiflexor muscles. In women who wear high, oblique heels, the talus also tends to be pushed forwards on the calcaneus (Fig. 59.3a). 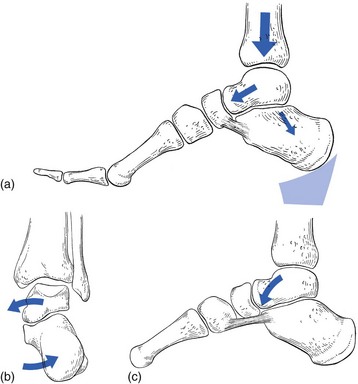 The forward and medial gliding of the talus imposes medial and downward pressure on the anteromedial calcaneal border. The medial pressure forces the calcaneus towards valgus, which may be furthered by a shortening of the Achilles tendon (Fig. 59.3b). The downward pressure of the talus evokes dorsiflexion at the talonavicular joint.3 This increases the depression of the longitudinal arch and can be responsible for greater stress on the plantar ligaments and the fascia plantaris (Fig. 59.3c). The downward pressure of the talus and the consequent dorsiflexion at the talonavicular joint will initiate a number of other events, which are the source of more deformity and trouble:

• Because of the obliquity of the joint surfaces, each dorsiflexion in the midtarsal joints is accompanied by some abduction. The downward movement of the talus is thus at the origin of an abduction deformity in the mid-foot. This dorsiflexed and abducted foot overstretches the inner ligaments (calcaneonavicular ligament and capsule of the talonavicular joint).

• Dorsiflexion at the midtarsal joint also causes spreading out and abduction of the metatarsals. Abduction is the result of obliquity of the joint line. Spreading out is caused by the specific cone-shaped form of the bases of the metatarsals, which move their heads away from the centre during extension (see online chapter Applied anatomy of the lower leg, ankle and foot). This flattens the anterior arch and results in a splay foot.

Thus, on account of an initial forward and medial gliding of the talus, a number of events take place:

• Valgus of the calcaneus with possible shortening of the Achilles tendon

• Dorsiflexion and abduction of the mid-foot, with flattening of the longitudinal arch and tension in the plantar and medial ligaments

• Flattening and abduction of the forefoot, with spreading of the metatarsal heads and loss of the anterior arch

• In due course, there will also be some effect on the tendons: that of the tibialis posterior, the first invertor of the foot, suffers strain and becomes inflamed. The tendon of the flexor hallucis longus, which is not only an invertor, but also, through its position under the sustentaculum tali, has a specific function as a stabilizer of the anterior part of the calcaneus, also becomes strained (Fig. 59.4). 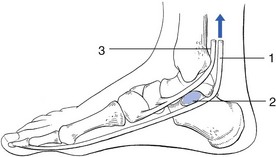 Tags: A System of Orthopaedic Medicine
Jun 5, 2016 | Posted by admin in ORTHOPEDIC | Comments Off on Disorders of the midtarsal joints
Premium Wordpress Themes by UFO Themes
WordPress theme by UFO themes