Chondrosarcoma (CHS) is the third most common primary malignant bone tumor after osteosarcoma and Ewing’s sarcoma. According to the World Health Organization’s (WHO) accepted definition,1 the term chondrosarcoma refers to “a group of locally aggressive or malignant tumors producing cartilaginous matrix, with different morphological features and clinical behavior.” This family of tumors includes several subtypes: central, peripheral, mesenchymal, clear-cell, and dedifferentiated.

Central CHS arises centrally in bone and then expands, infiltrating the trabeculae and being partially countered by some thin reactive bone (Fig. 9.1). It then erodes the cortex and invades the epidural space (Fig. 9.2) and the surrounding soft tissues. Peripheral CHS takes the form of cartilaginous and myxoid masses that slowly grow and invade the surrounding soft tissues (Fig. 9.3).

Mesenchymal CHS is rare, comprising 0.7% of malignant tumors observed at the Mayo Clinic.2 Usually, but not always, low-grade CHS includes cartilage and undifferentiated small round cells, sometimes bearing striking similarity to those in Ewing’s sarcoma. Fortunately, they can be differentiated by areas of chondroid matrix, which do not occur in Ewing’s sarcoma. Mesenchymal CHS in the spine is extremely rare.3

Clear-cell CHS is rarely observed in the spine. It is typically arranged in patterns of cartilage lobules. Benign giant cells are usually found throughout the tumor, either in small clusters or individually. This tumor is described as expansile and destructive, often with soft tissue extension and lack of mineralization. Its course is more aggressive and it is associated with a worse prognosis if it is underestimated and submitted for intralesional excision, whereas en-bloc resection is more successful.4Clear-cell CHS, however, can recur as long as 10 to 15 years after resection, and it can metastasize.

Dedifferentiated CHS is a highly vascularized, high-grade sarcoma that is extremely rare in the spine.5 Its cartilage component has a low-grade appearance in contrast to the high-grade cartilaginous portions that are often found in osteosarcomas. This CHS variant requires aggressive surgery (en-bloc resection) combined with chemotherapy. Histological grading of all CHSs range from 1 to 3; a grade 4 CHS corresponds to dedifferentiated CHS.

The maximum incidence of CHS is found in patients 30 to 70 years of age. Rarely does CHS occur before the age of 20 years, and only exceptionally is it found before puberty. It occurs approximately twice as often in men as in women.

Spine CHSs represent only 10% of all CHS. Most cases of CHS observed in the spine are central and peripheral, both possibly arising from a precursor lesion such as an enchondroma, osteochondroma, or exostosis. These cases are referred to as “secondary” CHS (Fig. 9.4). 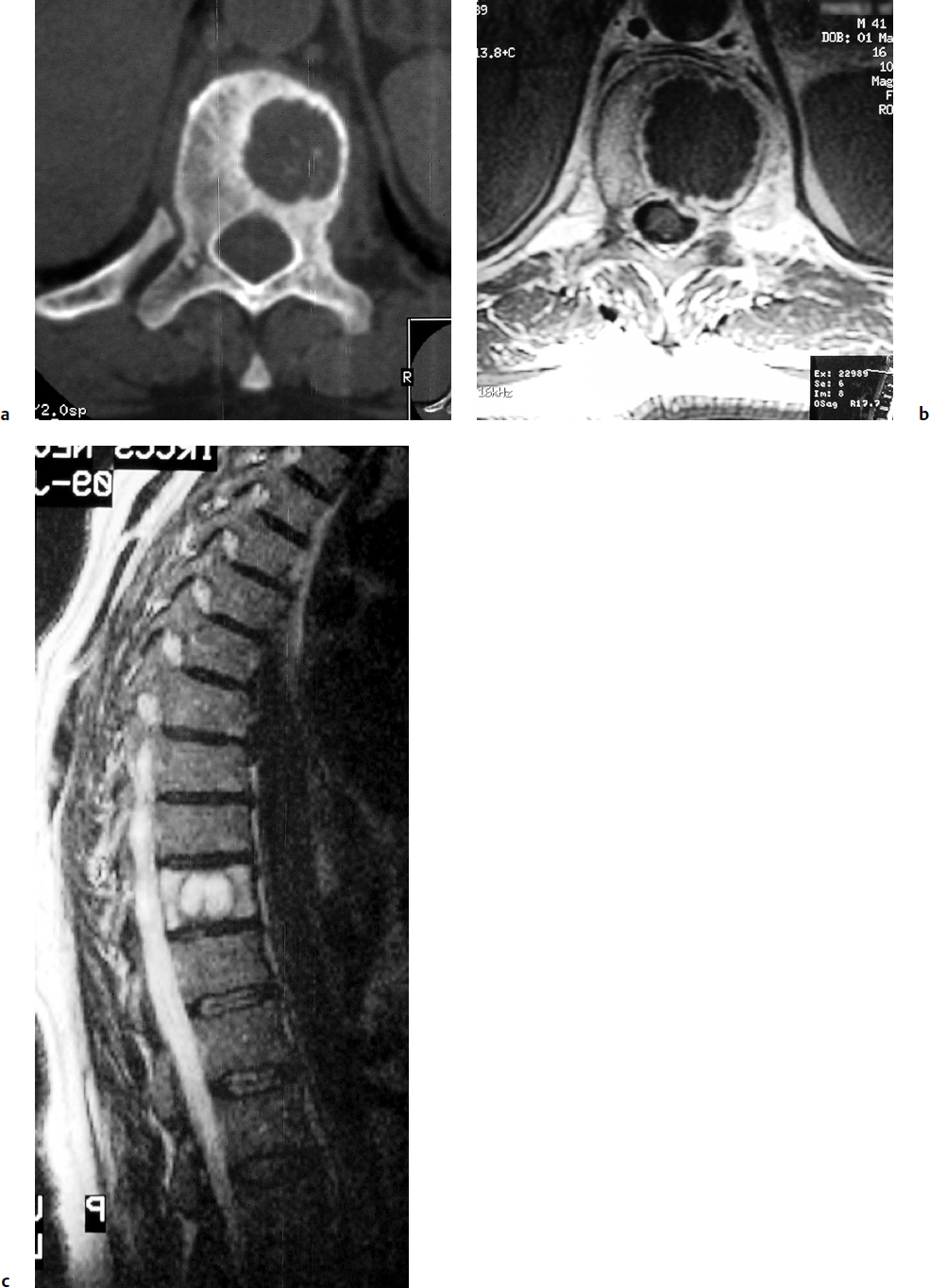 Fig. 9.1a–c A central chondrosarcoma (CHS) in a 54-year-old man. (a) A computed tomography (CT) scan demonstrates a lytic area arising in the vertebral body of T10, fully encased in the vertebral body, with well-defined margins, osteosclerotic reaction, and scattered rounded calcifications inside the tumor mass. (b) T1-weighted magnetic resonance imaging (MRI) demonstrates that the tumor has low intense signal. The tumor border is well defined. (c) T2-weighted MRI demonstrates that the tumor has a highintensity signal and is surrounded by highintensity cancellous bone signal related to edematous reaction. 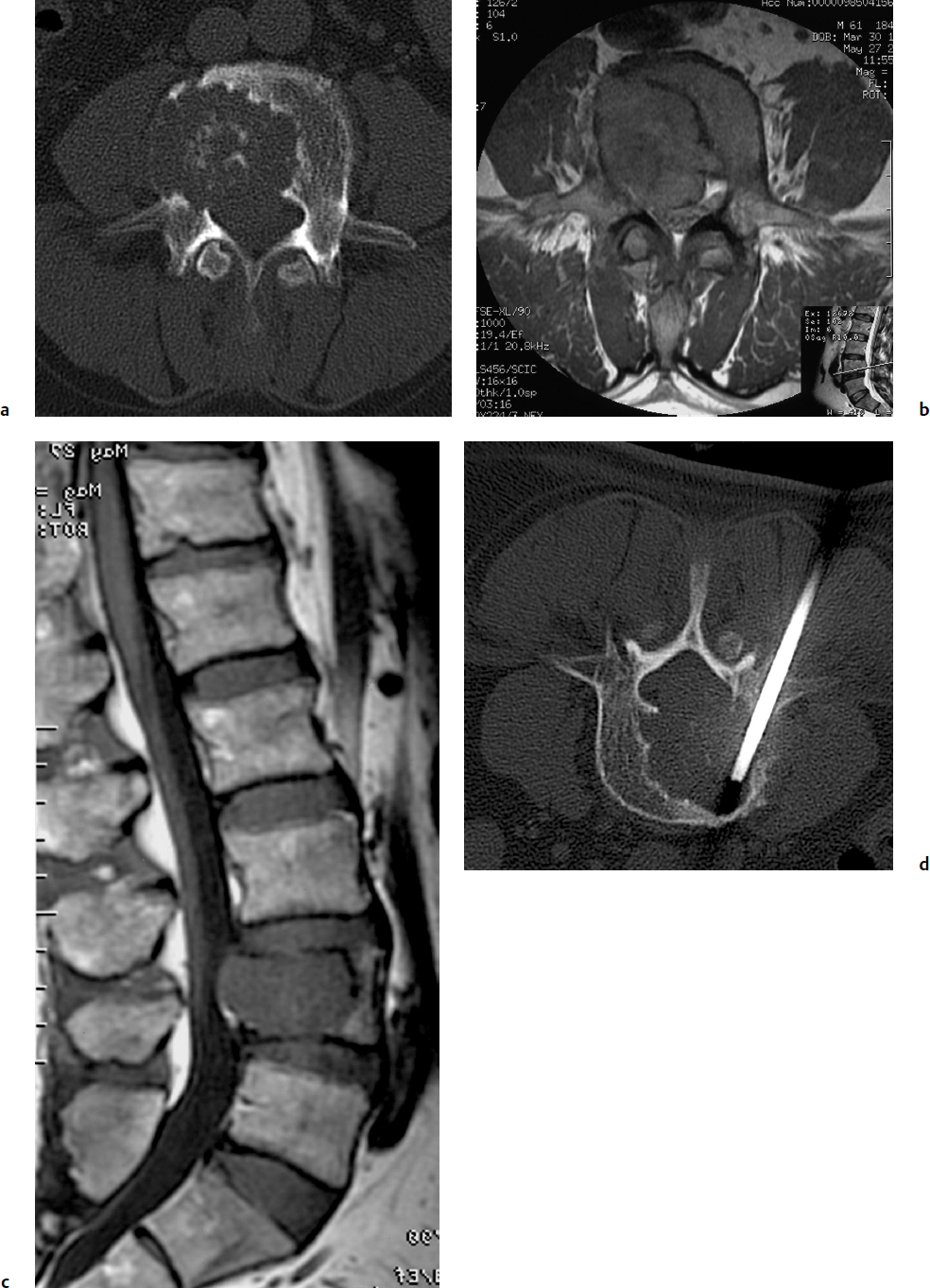 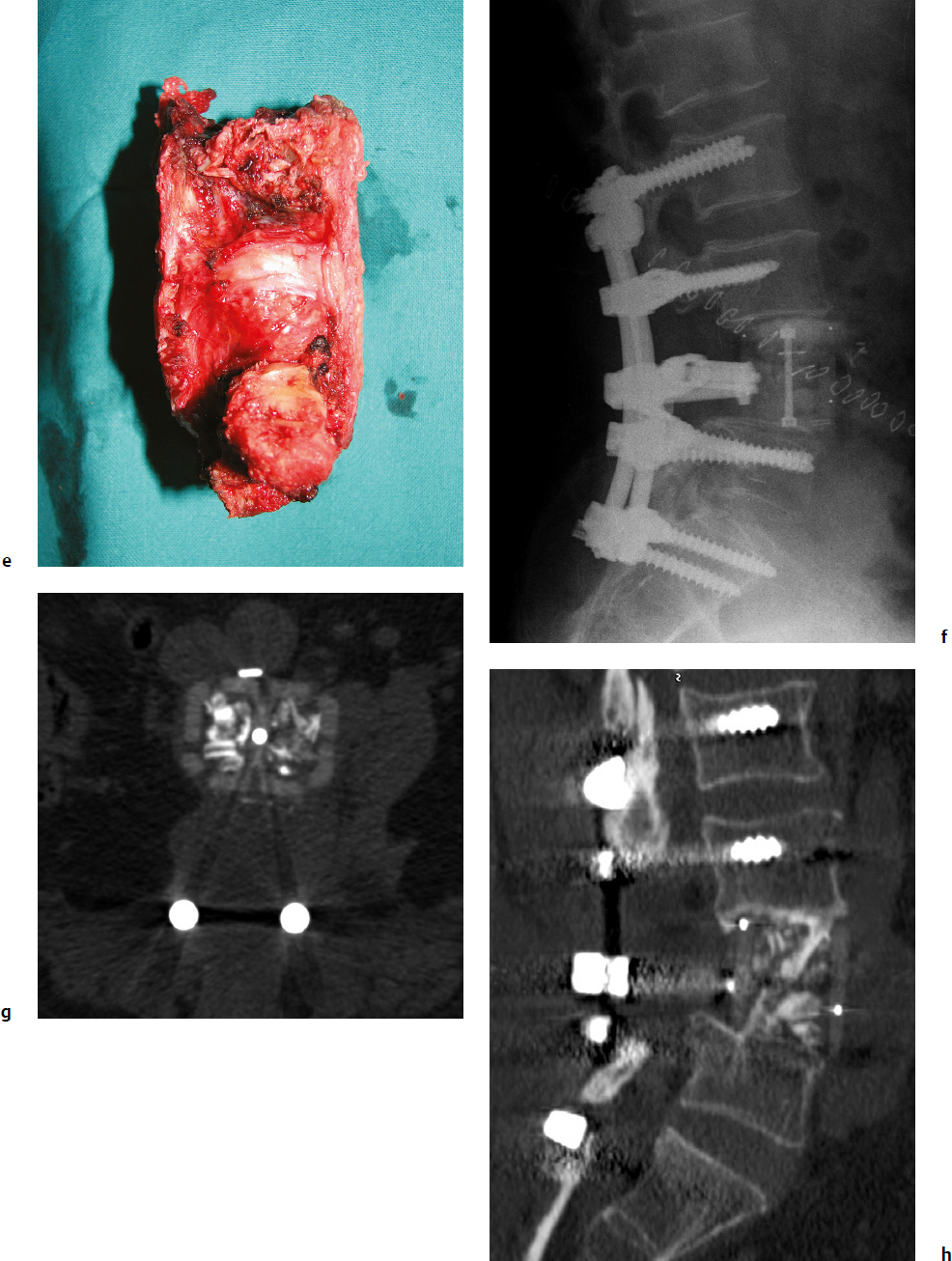 Fig. 9.2a–h A central CHS invading the canal, earlier than might be expected, in a 42-year-old woman. (a) CT scan demonstrates that a thin osteosclerotic border is limiting the tumor anterolaterally. There is a well-defined limit to the cancellous bone. Scattered calcifications are seen within the tumor mass. (b,c) MRI demonstrates better definition of the epidural extension (d) CT-guided trocar biopsy. (e) On the resected specimen the epidural extension is fully contained by the longitudinal ligament. (f) Reconstruction after the en-bloc resection. A carbon-fiber cage is filled with chips of autogenous graft. (g,h) At 5-year follow-up, there is no local recurrence. Bone ingrowth of the graft is seen inside the carbon-fiber cage, with fusion to the contiguous end plates. 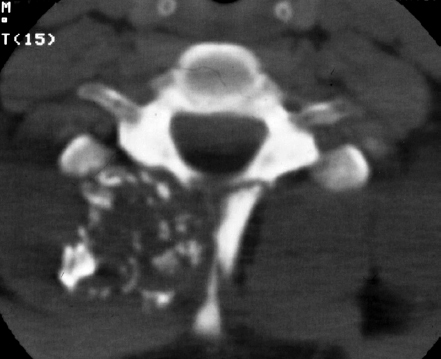 Fig. 9.3 Peripheral CHS arising from the posterior elements of C4 without any evidence of preexisting osteochondroma (exostosis) in a 28-year-old man. A huge radiolucent soft tissue mass is seen, with scattered round calcifications. 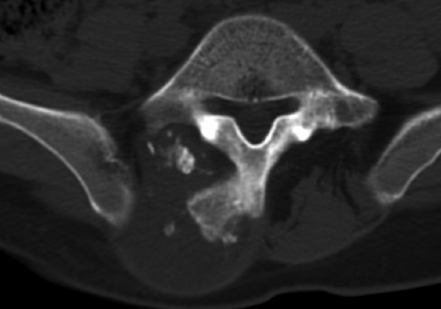 Fig. 9.4 Peripheral CHS secondary to exostosis of the spinous process of L5 in a 23-year-old woman. The image demonstrates the implant of the exostosis, typically characterized by continuity of the cortical bone and ingrowth of cancellous bone from the host bone. The cartilaginous cap is larger than 2 cm, thus confirming the diagnosis of CHS.

The CHSs in the spine are typically slow-growing tumors, and diagnosis is usually made later in their clinical course. Pain is the most frequent complaint of patients with central CHS in the mobile spine, as it provokes a dull, aching pain unrelated to activity and frequently nocturnal. Sacral CHSs are most commonly incidental tumors, owing to the large area where the tumor can develop before causing symptoms of compression (Fig. 9.5). When the posterior vertebral arches are involved, a fixed, hard, and nontender mass can be found (Figs. 9.3 and 9.6). Very rarely does a spinal CHS initially manifest with spinal cord or nerve root compression (Fig. 9.6).

Radiographically, central CHS of the spine is primarily a lytic lesion that arises centrally in the vertebral body (with or without a peripheral periosteal reaction), and sometimes sclerotic margins can also be visualized. In other cases, heavily calcified lobulated masses arise from the cortical margins. Later on, lytic bone destruction without mottled calcification can be seen, either as a soft tissue mass invading the epidural space (Fig. 9.2) or as a soft tissue mass with flocculating calcifications. As the tumor grows in size, the amount of reaction of surrounding bone evolves into massive permeative destruction of the underlying bone.

Computed tomography (CT) scan with magnetic resonance imaging (MRI) best demonstrates the extent of the lesion and the relationship with the surrounding anatomic structures, and it evaluates spinal cord compression (Fig. 9.2b,c). 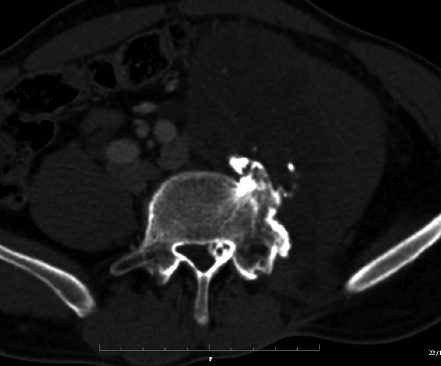 Fig. 9.5 Peripheral CHS secondary to exostosis of L5, growing in the abdomen without provoking pain, in a 36-year-old man. A painless mass was noted on physical examination. 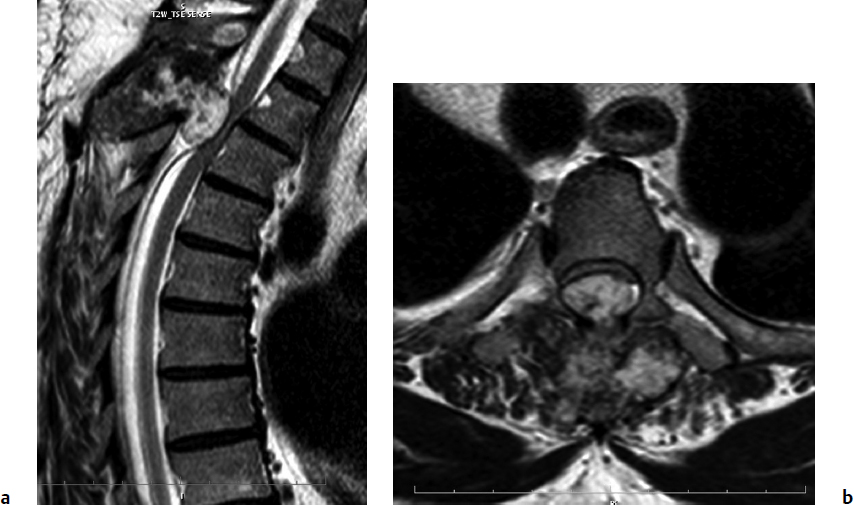 Fig. 9.6a,b A T4 CHS in a 59-year-old man. The patient gradually developed a gait impairment due to pyramidal symptoms. He experienced no pain; thus, the symptoms were underestimated until imaging was performed. (a,b) A huge chondroid low-vascularized mass is seen, arranged in lobules arising from and replacing the posterior elements, with severe cord compression.

The most difficult differential diagnosis is between low-grade CHS and benign, active, cartilaginous lesions. Classically, the imaging of peripheral CHS can be distinguished from an osteochondroma (exostosis) by the thickness of the cartilaginous cap. The size limit between osteochondroma (exostosis) and CHS has been established at 2 cm; a cap that is thicker than 2 cm is considered pathognomonic of CHS (Fig. 9.4).

Primary peripheral CHSs can be additionally distinguished from osteochondroma (exostosis) because CHSs consist of calcified cartilage, whereas most of the mass of an osteochondroma (exostosis) consists of pure bone. Furthermore, CHS can be distinguished from other malignant bone tumors of the spine because it frequently arises from the posterior elements, in contrast to osteosarcoma, Ewing’s sarcoma, multiple myeloma, and the majority of bone metastases.

Central CHS is radiographically less distinguishable. It is characterized by radiolucent permeative destruction of the vertebral body (similar to chordoma) mixed with calcified areas. The calcifications in the low-grade tumors have the characteristic ringed pattern. In high-grade lesions the calcifications are not the dominant radiographic pattern, and there are few radiological clues reminiscent of the cartilaginous histogenesis of the tumor: poorly defined margins, permeative destruction, and inconsistent bone reaction. Furthermore, high-grade lesions that have little or no calcifications may show unexpectedly as “cold” lesions on isotope scan, much like myeloma. Angiography is even less valuable than isotope scan because of the little vascularity of CHSs. These negative findings are helpful in determining the diagnosis when they are associated with aggressive images on the MRI.

The management of CHSs of the limbs is clearly established and commonly accepted. There is extensive evidence, dating back many years, that the prognosis is dependent on the histological grade of malignancy and on the surgical treatment.6–9 CHSs historically have been considered resistant to most protocols of radiation therapy and chemotherapy.

According to Campanacci et al,9 intralesional excision can be considered a valid option in grade 1 CHS of the appendicular skeleton, resulting in a low rate of resectable recurrence versus more effective but significantly more aggressive en-bloc resection.

However, in the spine local adjuvants such as phenol and cryosurgery are less commonly used. Recurrent CHS is frequently associated with malignant progression, worsening the prognosis. Local recurrences in the spine are debilitating and aggressive, sometimes provoking serious neurologic deficits and leading to difficult palliation and eventually to death after revision surgery, owing to its high morbidity. Thus, it would be feasible to say that with CHSs of the spine, there is a direct correlation between the success of the first surgery and the ultimate prognosis.

The role of en-bloc resection in the treatment of CHS has been accepted since the pioneering work by Stener,10 who also described how to plan these surgical procedures based on the tumor extension and the local anatomy. Because of the difficulties associated with en-bloc surgery in the spine, and because spine surgeons use various oncological criteria (Fig. 9.7), lesions of the vertebral column have had a poor prognosis independent of the histological grade.11–14

An exhaustive literature review based on the best available evidence and clinical expertise concluded that the optimal surgical management for CHS of the spine is en-bloc surgical resection with wide or marginal margins,11 as evidenced by a decrease in local recurrence, longer disease-free survival, and, ultimately, a reduction of death related to disease (strong recommendation, moderate-quality evidence). Furthermore, radiation is not indicated for the primary treatment of chondrosarcoma of the spine (strong recommendation, very low quality evidence). However, radiation therapy of at least 60 to 65 Gy equivalents is indicated as an adjuvant treatment when there has been incomplete resection or an intralesional margin (weak recommendation, low-quality evidence).

Because CHSs grow slowly, local recurrence and metastases may occur more than 10 years after removal of the tumor; the 5-year survival is not a significant criterion for cure. All reports with shorter follow-ups have a lesser validity when comparing paradigms of treatment. Moreover, due to the frequent underestimation of CHS, the overall rate for cure is less than that for osteosarcoma at 5 years.