BASE Jumping and Wingsuit Flying Injuries

Operation of the slider
).


BASE jumping from lower objects often requires a rapid canopy deployment, and in these cases, the slider may be eliminated (slider off pack jobs) or limited in its effectiveness by packing the chute with the slider at the base of the lines (slider down pack jobs) [3, 8]. The tail gate is a reefing device which sequences the opening of the parachute. It forces the nose of the canopy to inflate first followed by the tail to minimize the risk of brake-line malfunctions. Very low objects (below 60 m/200 ft) require the canopy to open almost immediately on exiting, and an assisted deployment system is often used in these cases [3]. In an assisted deployment system, one end of the deployment chain is fixed to the exit point or held by a fellow jumper, so the deployment starts as soon as the jumper leaves the exit point, and there is no free fall involved. An assisted deployment system may consist of a static line, a break cord (or velcro) used to connect the canopy to an anchor point, or a pilot chute assist, a system where the pilot chute is held by a helper until the jumper reaches line stretch [6].
Bridles for BASE jumping are longer than those used in parachuting. The distance between the attachment (pin) and the pilot chute measures at least 2.7 m (9.0 ft). This length is necessary to generate a greater snatch force which is critical due to the low airspeed during BASE jumping deployments. It is also required to prevent the opening system (the pilot chute, in particular) being influenced by the wake turbulence behind the jumper during free fall. The use of ultralight fabrics combined with lightweight, low-profile containers has allowed the weight of the equipment used by BASE jumpers to be more than halved. Lightweight canopies are preferred by jumpers who spend most of their time jumping from higher cliffs or objects which require longer approaches as well as by wingsuit pilots or BASE jumpers who wish to have a low-profile container system.

The terminal velocity of a skydiver in a belly-to-earth (face down) free-fall position is about 195 km/h (121 mph or 54 m/s) [9]. It represents the asymptotic limiting value of the acceleration process: 50 % of terminal velocity is reached after about 3 s and 90 % after 8 s, while it takes 15 s of free fall to reach 99 %. BASE jumping is characterized by the low altitude from which the fall starts, often less than 150 m above the ground, and by the proximity to the jumped object during flight. The shortness of the flight means there is insufficient time to reach terminal speed, and BASE jumpers operate at slower airspeeds due to the limited altitude. For this reason, while skydivers use the air flow to stabilize their position during their flights, BASE jumpers have much less aerodynamic control over their position in flight.
As a consequence, exits play a key role in BASE jumping. Body position at the moment of jumping determines the stability of flight in the first few seconds before the jumper achieves sufficient airspeed to enable aerodynamic stability (Fig. 19.2 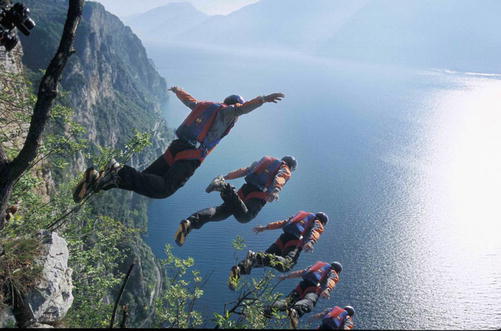 An illustration of the exit point in base jumping and the transition into tracking away flight position (Photo: Ronen Topelberg. © Omer Mei-Dan 2016. All Rights Reserved)
). In a short jump, a good exit helps to ensure a stable free fall and puts the athlete in the right body position for a good deployment, while a poor exit may negatively affect deployment. Also in a longer jump, a poor exit requires a lot of jumper skill and experience to get back to a good position. Instability at the moment of deployment places the jumper at high risk of chute malfunction, entanglement or off-heading canopy opening, an undesirable event where the parachute opens facing the object jumped from and sending the jumper toward the fixed object with a high risk of collision [4].

As well as being technically complex, jumping from a building or a tower has legal implications, and BASE jumpers rarely obtain permission to jump from these objects. Owners of buildings or landing zones may occasionally allow authorized BASE jumpers access such as in the case of a BASE jumping event. The most popular example is probably the KL Tower BASE Jump, an annual 4-day event that usually takes place in September and sees numerous BASE jumpers leap from the open deck of the Menara Communication Tower, a 421-m (1381-ft) jump in Kuala Lumpur, Malaysia [10]. In addition to the legal implications, the risk of radiation and electrocution should be taken into account when considering a jump from an antenna. Spans are generally considered to be the safest kind of fixed objects for BASE jumping due to the increased airspace and the least number of obstacles to avoid during the fall. The Perrine Bridge in Twin Falls, Idaho, a sub 153-m (500-ft) bridge running north and southbound on Route 93, the main link between Twin Falls County and Jerome County, is the only man-made structure in the USA where BASE jumping is allowed year-round without a permit. This is the main reason for its worldwide popularity as a BASE jumping site [11]. BASE jumping is also allowed during Fayette County’s “Bridge Day,” held the third Saturday of every October at the New River Gorge Bridge, a 267-m (876-ft) high arch bridge over the New River Gorge near Fayetteville, West Virginia, in the Appalachian Mountains of the eastern USA [12]. Natural cliffs are very popular with BASE jumpers. They provide more flight time and usually the opportunity to reach near-terminal airspeeds to track away from the object [3] (Fig. 19.3

BASE jump of the Basaseachic falls in Mexico, meter cliff (Photo: Yaron Weinstein. © Omer Mei-Dan 2016. All Rights Reserved)
).
However, some high cliffs ideal for BASE jumping are located in remote areas, far from medical assistance, and the difficulties associated with access for rescue services as well as the time required for the recovery of the victim in the case of an incident may increase the risk of fatalities.
Upon completing a jump from all of the four object categories (buildings, antennas, spans, and earth), a jumper may choose to apply for a “BASE number”, which are awarded sequentially. BASE number 1 was awarded to Phil Smith of Houston, Texas, in 1981. As of December 2014, over 1850 BASE numbers have been issued [13].

Wingsuits are suits equipped with small wings of fabric between the legs and under the arms that enlarge the surface area of the human body (Fig. 19.4

An exit of a wingsuit flight before the air fills in the wing’s compartments. South Africa (© Omer Mei-Dan 2016. All Rights Reserved)
). Ram-air technology which involves air being inserted under pressure between layers of fabric is used in the wings of these garments and allows flights at glide ratios (lift/drag) from 2:1 to 3:1 (2 and 3 m for every 1 m of loss in altitude, respectively) comparable to that of an open flying wing parachute [5, 14].
Achieving the optimal body position involves the athletes finding the best compromise between exposure of the greatest possible surface area to airflow, the best angle of attack for the cleanest possible airflow over the wingsuit surface, and the route required. A wingsuit flight may start from a skydiving drop aircraft or BASE jump exit point, and normally ends by deploying a parachute. At this point, the athletes usually unzip the arm wings allowing them to reach the steering parachute toggles and control the landing. In BASE jumping, the use of wingsuits makes objects jumpable that otherwise would not be, allowing pilots to fly down mountain slopes of various conformations along ridges or through canyons [5]. The development of high flight-glide ratio wingsuits has also allowed the introduction of a new style of flight called proximity flying. In this kind of flight, wingsuits are not used to glide away from the jumped object but rather to fly in close proximity to walls, a few meters above ridge lines or rock formations in order to better enjoy the speed and the surrounding landmarks [5]. Although the wing area offered by the wingsuits has gradually increased over the years resulting in more lift and an earlier start to the flight, it also requires more experience and training to master when used at lower air speeds.

Soreide et al. reviewed records of 20,850 jumps from 1995 to 2005 at the Kjerag Massif in the Lysefjorden (Rogaland County, Stavanger) on the southwestern coast of Norway and reported a total of 82 adverse events [15] requiring the involvement of a helicopter and climbers in rescue in 27 and 8 cases respectively. In this series, an injury rate of 1/254 jumps (0.4 %) including minor injuries was found. Most of the injuries were minor such as concussions and sprained ankles or knees, while a few were moderate including an ankle fracture and a head concussion requiring overnight observation. However, it was pointed out that this location, despite being a world-renowned site for legal BASE jumping activity, is not representative of BASE jumping as whole since the Kjerag jumping zone is relatively forgiving. It is a 1000-m high cliff (about 3300 ft) that allows jumpers to reach high airspeeds, stabilize their body position, and move away from the wall before opening the canopy, and it has a clear landing area [4].
Only gold members can continue reading. Log In or Register to continue